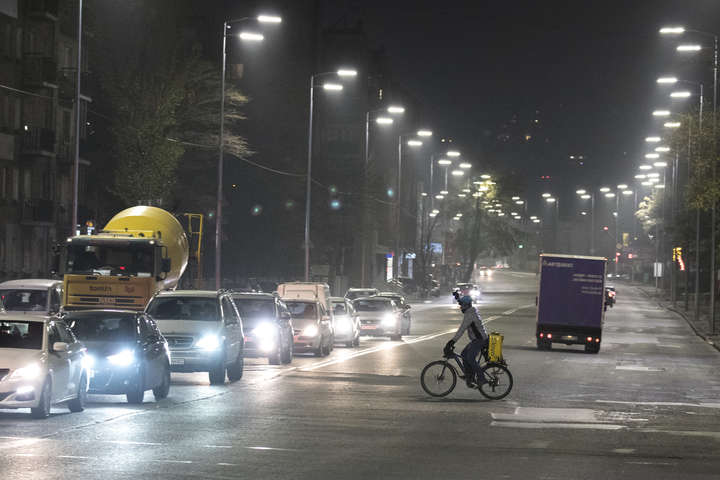 The financial audit of an ME revealed an overestimation of the cost of materials and outdated approaches to energy accounting.

Kyiv’s residents could notice how in recent years, the lighting of city streets, especially major highways, has been actively updated. With this important area of work, the city authorities are killing several birds with one stone: outdoor lighting networks are becoming more modern and convenient for road users, safety is improving, and an economic effect is achieved. It is not the repair itself that should help save money from the city budget (this is, of course, an expense), but the replacement of lamps with energy-saving ones — the old mercury and sodium ones with LED ones. Lanterns with LED elements shine better, last longer and, most importantly, significantly save electricity consumption.

As of now, activities in this area are regulated by the City target program of outdoor lighting in Kyiv for the period of 2019-2022. The four-year program budget is UAH 2.72 bln. Out of this amount, UAH 1.76 bln is allocated from the local budget, and UAH 0.96 bln accounts for other sources (national budget or loan). The program is implemented by the Department of Transport Infrastructure of the Kyiv City State Administration, to which ME Kyivmisksvitlo is subordinate. This company is the balance holder of all outdoor lighting networks in the city and, accordingly, the procuring entity of works on their renewal.

In February 2021, the specialized department reported to the MPs of the Kyiv City Council on the implementation of the program in 2020. And judging by the report, it is the major repairs of street lighting networks with the replacement of lamps that is the most successful area of work of Kyivmisksvitlo. Last year, works for UAH 326 mln were carried out instead of the planned UAH 146 mln.  If to count in the lamps, 6,515 were replaced instead of 2,666. Allegedly, there were even savings in this case: the planned cost of one lamp was UAH 55,000, and the actual cost was less than UAH 50,000.

The ME compensated for these successes by not fulfilling other planned program items. The company did not replace lanterns in parks and garden squares at all, did not build lighting networks for highways, and did not carry out major repairs to architectural and decorative lighting networks. The outdoor territories were also almost untouched — 4 objects were worked on, 93 are in the plan.

Shortly after the report on the work of the ME, mayor Vitali Klitschko instructed to conduct an unscheduled audit of it. This is what the Department of Internal Financial Control and Audit did, which in a fairly short time — only a month and a half — prepared the “Assessment of the activity of ME Kyivmisksvitlo on compliance with the law during tender procedures and fulfillment of contractual obligations for 2019-2020.”

In general, the inspectors who analyzed the work of Kyivmisksvitlo for 2019-2020, covered procurement transactions worth UAH 262.4 mln. Out of this money, the detected violations amounted to only UAH 0.5 mln of losses. At the same time, the auditors also recorded violations amounting to UAH 27 mln, which did not lead to losses. They also noted the inefficient use of funds with estimated losses of UAH 16.8 mln.

As far as the last point is concerned, the bureaucratic wording sounds much more neutral than the facts behind it. We are talking about an audit finding on the cost of lamp supports. For major repairs with replacement of lamps, which were discussed above, not only LED lamps are purchased, but also lamp supports. Kyivekspertyza specialists checked the cost of works on 31 major repairs (22 objects in 2019, 9 in 2020) and came to the conclusion that outdoor lighting supports with a height of 8-10 m were purchased at prices that are 46-60% higher than market prices.

According to experts, the total amount of losses in the procurement of supports was UAH 16.8 mln, or 9.9% of the cost of all inspected works.

To determine the market value of the supports, Kyivekspertyza sent requests for a commercial offer to five manufacturing enterprises: TOV Company Metal Invest, TOV Metalogalva, TOV Eurorize, TOV Dolight, BLAGOUST. Based on their responses, the auditors formed their own sample of prices. Moreover, experts note that they used not the average, but the highest values of offers. And still, the difference with the price that Kyivmisksvitlo put in the estimate was 60% for 8-meter supports and 46% for 10-meter supports (overestimation in ME).

Kyivekspertyza also studied the websites of support manufacturers and suppliers. There, the cost of supports is also lower than the price that Kyivmisksvitlo paid for the supports in 2019-2020.

Moreover, even if you search for these supports on the internet, they are sold cheaper than what Kyivmisksvitlo paid. For example, the 8-meter 103/220 OVOG support (these are the ones that ME buys) is offered for UAH 15,440, and this includes VAT. Ten-meter ones can be found for UAH 16,500 apiece.

That is, probably, approximately UAH 7,000 was overpaid for each pole with a lantern.

ME representatives do not agree with the auditors’ conclusions. Director of Kyivmisksvitlo Volodymyr Krutsenko responds: to form the price of supports, the company sent requests for a commercial offer to three manufacturing plants in 2019 and four in 2020 (it also received three responses). ME formed estimates already on the basis of their price. And they, in turn, received positive reports from the SE Ukrderzhbudekspertyza.

In addition, Kyivaudit found an overestimation of the cost of supports for procurement of Kyivmisksvitlo during its previous audit in 2019. Back then, it analyzed procurement transactions for 112 facilities for 2018. The auditors found that ME conducted a market assessment based on only two offers, made its own one by asking prices with five companies, and considered that Kyivmisksvitlo spent UAH 15.9 mln inefficiently. To correct this violation, ME undertook to identify the official responsible for analyzing current prices on the market when determining the cost of direct costs when drawing up estimate documentation.

Another interesting finding of the auditors concerns not losses from inflating the price, but the so-called “lost profits” due to inefficient use of municipal resources.

In 2020, ME Kyivmisksvitlo purchased electricity for powering outdoor lighting networks for UAH 134.8 mln (62.3 mln kWh). The auditors found that 520 of the 1,485 connected facilities consume more than 50,000 kWh per year. They account for 60% of the total amount of the electricity used. The audit advises equipping these facilities with hourly electricity metering systems — ASKOE/LUZOD — to save on resource procurement in the future.

The fact is that there are now two types of non-household consumers — “A” and “B” on the electricity market, which in Ukraine is becoming more and more free and technologically advanced. “A” is a group of enterprises whose sites are equipped with automated systems for reading power consumption data. The most common of these systems is ASKOE, an automated system for commercial electricity metering. It records consumption indicators on an hourly basis and transmits data from the company’s meters to its own server and the power supply company’s server. Therefore, in the future, group “A” enterprises can consider hourly electricity prices, adjust their electricity costs, and receive more favorable tariffs.

Group “B” includes all other consumers who are not equipped and, what is perhaps a little strange, Kyivmisksvitlo as well.

Therefore, in their conclusions, the auditors advise the company to pay attention to this omission and give the following calculations:

The cost of equipment for ASKOE 520 points that consume 60% of electricity will amount to UAH 10.5 mln. Lights mostly work at night, and then the electricity tariff is cheaper. Therefore, if the ASKOE records the time of its consumption, it will be possible to reduce the cost of lighting. According to experts, these savings for Kyivmisksvitlo may amount to about 13% per year. In 2020, it would be UAH 8.1 mln. Therefore, the payback period for the arrangement of 520 facilities with ASKOE systems will be only 1.5 years.

ME representatives responded to this recommendation by stating that they were already saving budget funds by replacing mercury-sodium lamps. And this saved UAH 28 mln in 2017-2020. They are not sure about the conclusions on the effectiveness of the implementation of the ASKOE because they do not see the proof of the above calculations of the cost of equipment and its payback. However, perhaps they will address this issue.