Great “Nationalization”: Which Russian Assets Will be Transferred to Ukraine

Who is searching for the property of the russians and how the state will confiscate it.

On May 12, the Verkhovna Rada approved a presidential decree launching the so-called nationalization of russian assets in Ukraine. In fact, it is rather confiscation because according to our Constitution, forced alienation of property provides for the payment of compensation to previous owners. In the case of russian property in Ukraine — no compensation is provided.

However, whatever you call it, the first russian property — corporate rights and financial assets of the Ukrainian subsidiaries of the russian state-owned MR Bank and Prominvestbank — will be transferred to the National Investment Fund of Ukraine.

This is just the beginning of a large-scale campaign. In this text, we are explaining who and how will look for this property in Ukraine, and how it will be seized.

Who is searching for russian assets?

The law does not clearly define who has to search for and identify russian assets. It is known that the Prime Minister instructed the Ministry of Economy to form a list of property rights objects of the russian federation and its residents. It will do this based on proposals that will be provided to it by the central executive authorities, regional state/military administrations, as well as other state bodies. The list is still being formed, but some state bodies have begun to cover their achievements publicly in the field of search for russian property.

The Agency, together with the Prosecutor General’s Office, the Ministry of Foreign Affairs, the Security Service of Ukraine, the NABU, the National Police, and the State Financial Monitoring Service, is a member of the Task Force UA interdepartmental working group on search and seizure of the russian assets. Together, they are looking for russian assets not only in Ukraine, but also abroad.

Within the framework of this project, the NACP has launched a Portal where everyone can report the assets of persons involved in the aggression of russia against Ukraine.

However, the NBU does not plan to “nationalize” Alfa-Bank, whose shareholders are russian businessmen who have fallen under EU sanctions. Initially, russians were to be obliged to transfer their shares to other, unrelated persons. However, eventually, the NBU determined a trustee to whom their voting rights were transferred. Sanctioned owners, in turn, promised to recapitalize the bank for USD 1 bln.

– corporate rights and assets of the Mining and Enrichment Plant, which extracted titanium-containing raw materials;

– assets of the companies of the russian oligarch Mikhail Friedman, through which he owns the above-mentioned Alfa-Bank, for a total amount of more than UAH 12.4 bln.

The Bureau also found 342 pieces of equipment (cars and trucks, special and agricultural machinery) belonging to enterprises from russia and Belarus.

The SBI estimates all the identified property at tens of millions of dollars.

Recently, it has become known that the SBI was investigating the fact that a group of russians close to the Kremlin had appropriated five energy distribution enterprises: Khersonoblenergo,  Kirovogradoblenergo,  Zhytomyroblenergo,  Rivneoblenergo,  Chernivtsioblenergo. In addition to these critical infrastructure facilities, the group controls the Zaporizhzhia-based Dniprospetsstal and Premier Hotels & Resorts, including the five-star Premier Palace in Kyiv and Premier Hotel in Odesa. 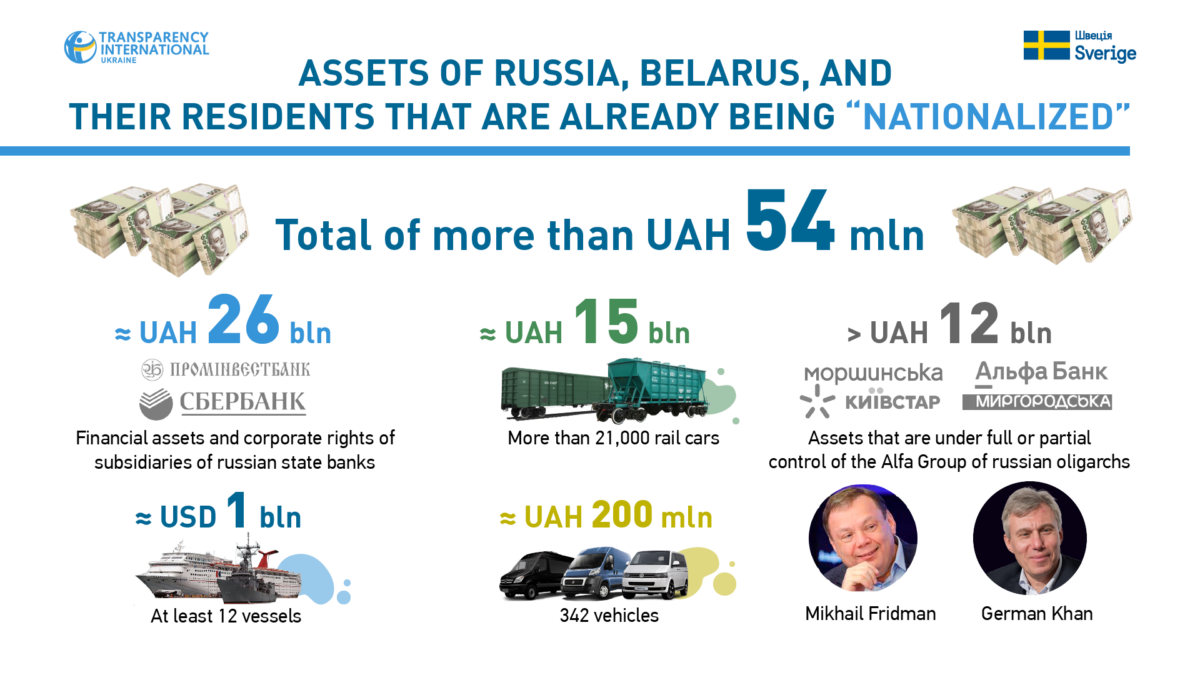 In total, according to YouControl, approximately 14,000 active Ukrainian companies have citizens or residents of the russian federation among the owners, founders, or ultimate beneficiaries, and more than 270 Ukrainian companies are co-owners of russian enterprises.

How assets will be seized

To date, Ukraine has four legislative mechanisms for the seizure and confiscation of the assets of the rf and its residents.

Confiscation is a justified response to the actions of the aggressor state. Funds from the sale of russian assets can be channeled to the army, to the restoration of destroyed infrastructure, and compensation to the victims of the crimes of the rf. At the same time, it is important that confiscation does not create problems for Ukraine in the future in the legal aspect. Forced dispossession shall be an exceptional measure which shall be reasonable and proportionate in the particular circumstances. Therefore, it is essential that the assets of the rf and its residents are seized according to a procedure that will be consistent with the provisions of Ukrainian legislation, as well as comply with international legal standards.

This material was written in collaboration with Andriy Shvadchak and Kyryl Sydorchuk.