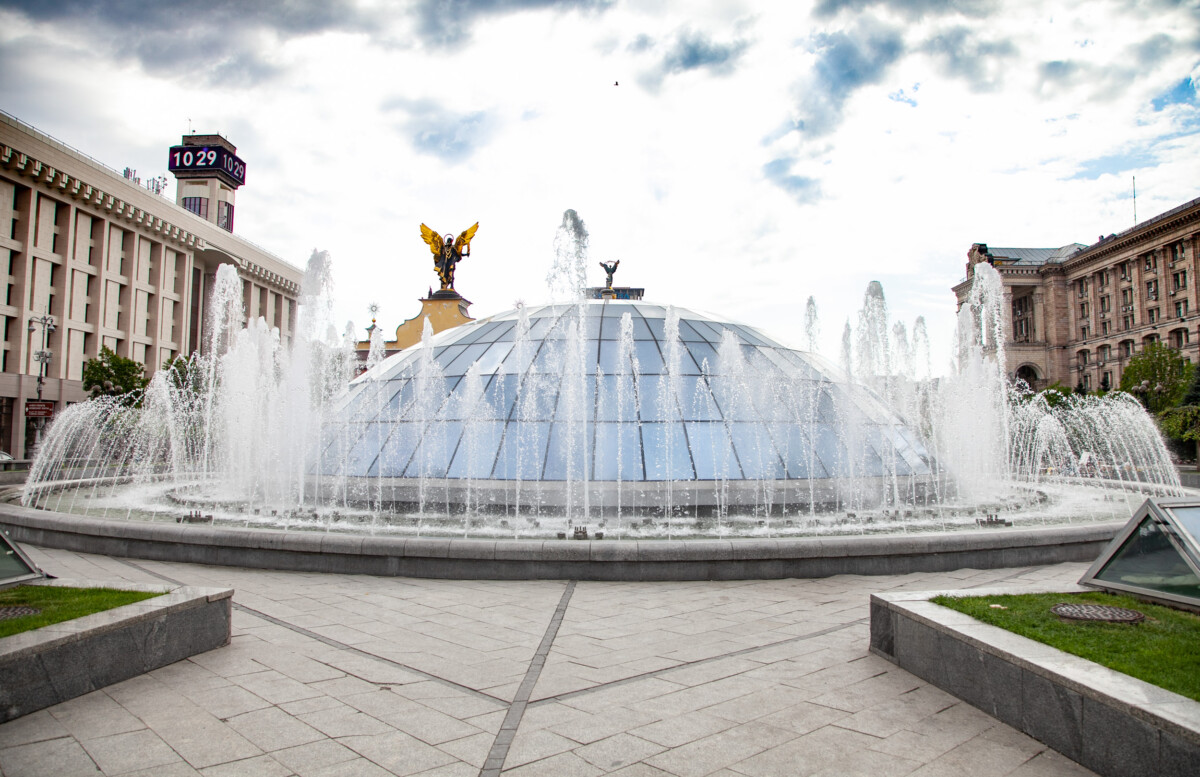 Light, musical, geyser, “dry,” and even pedestrian — the capital’s fountains delight with their diversity, and in the current heat even save the residents of Kyiv. We have learnt how much the Kyiv authorities have spent on renovating fountains in recent years.

Summer in a big city is not just about scooters on the streets, open-air concerts, and sports activities on the water and in parks. This is also the heat, which can be extremely difficult to stand. Therefore, fountains in the middle of a concrete city sometimes become a real salvation for its citizens.

We decided to learn how much the most famous fountains created or renovated after 2014 cost the budget of Kyiv.

Fountain on Poshtova Square was officially opened by the mayor of Kyiv Vitali Klitschko. The total cost of reconstruction of Poshtova Square (road, overpass, updated pedestrian zone with fountain) at that stage approximately amounted to UAH 440 mln. Since there was no Prozorro at that time, it was not possible to view the documentation for each type of work.

Grand opening of the renovated Poshtova Square with Vitali Klitschko bathing in the fountain was remembered for its liveliness, general high spirits and became the best advertisement for the new recreation location for Kyiv residents. However, the “dry” fountain in the middle of the square did not please Kyiv residents forever — the fountain on Poshtova Square has not been working for the last few years. A bare square made of granite and without trees does not give any salvation from the heat for Kyiv residents in the summer.

Now, as we checked, the fountain is boarded up. And the pedestrian zone itself, although open, is extremely unkempt in some parts, painted with graffiti. The Podilsk Regional State Administration could not explain to us who was responsible for the non-working fountain, since the Poshtova Square was not on the balance sheet of any of the institutions. This is due to the fact that the square opened in 2015 was only the first stage of its complex reconstruction project, and in fact the object has not yet been put into operation.

To the 25th anniversary of Ukraine’s independence in Kyiv a reconstructed fountain near the National Opera was opened. It’s been there before, but it hasn’t worked in the previous 15 years. The reconstruction, which cost UAH 968,000, involved updating the fountain bowl itself, equipping it with light and music accompaniment, and improving the site nearby. Currently, the fountain is not working — this is probably due to the repair works that began on the square in front of the National Opera. According to the residents, previously the program with music could be enjoyed before performances at the Opera.

In the same year, Kyiv residents were presented with another project — fountains that flow directly from the waters of the Rusanivskyi channel (Dnipro District of the capital). The complex consists of 12 fountains with light and music accompaniment, their jets beat up to 30 m up. The residents of Rusanivka immediately took to these fountains, and the start of their work is eagerly awaited every year.

The complex was opened in two stages, the last stage — in 2017. Tenders had been held shortly before the use of Prozorro became mandatory, so, information about the procurement can only be found on the portal of the Kyivaudit. Total project cost amounted to UAH 13 mln. Interestingly, the annual maintenance of these fountains (conservation for winter, start-up, repair, automatic control) costs the balance holder ME Kyivvodfond a pretty penny — UAH 1-2 mln annually.

In May 2017, a renovated fountain complex on Independence Square was opened. The Maidan fountains on the even-numbered side of Khreshchatyk had not work after the Revolution of Dignity, that is, for three years, and their launch became a significant event in the life of the city. The cherry on top of the project was the light and music equipment of fountains, the musical program of which was chosen by residents of the city by voting.

The cost of repairing fountains corresponded to the size of the complex: reconstruction of the Great fountain — UAH 19.1 mln, reconstruction of the Small fountains — UAH 10.9 mln (both tenders were won by TOV Energo-Invest, the amounts are indicated with the cost of project documentation). In the same year, a cascade fountain was repaired on the Maidan (odd side) for UAH 1.5 mln and the “water balloon” for UAH 852,000. These fountains still function and delight Kyiv residents with bright shows on summer evenings (work schedule can be found here).

The opening of a new fountain on Volodymyrska Hill became part of another great project of Vitali Klitschko — a bicycle and pedestrian bridge that connected the park near the Peoples’ Friendship Arch and Volodymyrska Hill. The glass bridge, as the people of Kyiv quickly nicknamed it, cost the budget more than UAH 340 mln. This estimate includes UAH 90 mln for the improvement of the territory on Volodymyrska Hill and the construction of a fountain. The fountain itself was not worth such an astronomical amount — UAH 4.2 mln. However, its size is much more modest than, for example, the Maidan fountain’s.

A strange fate awaited the cascading light and music fountain in the Mariia Zankovetska public garden (on Velyka Vasylkivska street). This complex was opened only in 2012, and they keep repairing it all the time. It seems that Kyivvodfond repaired it in 2016. And in 2018, the fountain already stopped working, so, the next year it was closed for repairs again. The cost of the renovation amounted to UAH 4.4 mln, and the works were performed by TOV Energo-Invest.

The same year the fountain near the Kyiv Palace of Children and Youth started working. The mosaic complex of fountains Stars and constellations, according to KCSA, has not functioned for more than 40 years. A unique mosaic complex, which is a monument of modernism, was created by Kyiv artists. Reconstruction of the fountain’s pools began in 2017, and the works continued until the end of 2020. According to information on Prozorro, the cost of the renovation alone was UAH 16.3 mln.

Last year was a record year for the number of renovated fountain openings in the city. The “dry” light and music fountain in Syretskyi Park appeared together with the first stage of reconstruction of this green zone. The fountain immediately became a favorite place for park visitors, especially children. Earlier, we wrote about the total cost of expenses for this park, and one of the MPs of the Kyiv City Council of the last convocation asked Zelenbud about the estimate separately for the fountain — it amounted to UAH 7.9 mln.

Long-suffering repairs of the Partisan Glory Park in Darnytskyi district ended last year with a spectacular opening of a “pedestrian” fountain at the entrance to the park. An unusual fountain is a corridor of arches from which water falls, so everyone can run right under it. In addition, jets hit from the ground. The total cost of park reconstruction was more than UAH 70 mln. The first contractor caused material damage to the customer in the amount of UAH 17 mln, the proceedings continued for a long time, and the old fountain, which the hapless contractor began to reconstruct, remained destroyed for more than a year. When the arrest was lifted from the park, the preparation of the new fountain was ordered with an individual simplified procurement for the amount of UAH 880,000 (the contractor was TOV Energo-Invest).

A new fountain also appeared near the Obolon metro station — it became part of the renovated Obolonska square, the reconstruction of which cost approximately UAH 14 mln, UAH 4.4 million of this money was spent on the fountain.

The Samson fountain on Kontraktova square (Podil) was renovated last autumn. This is one of the oldest fountains in Kyiv, and in recent years it has been either constantly renovated or arbitrarily repainted. Last year, Kyivzelenbud made repairs for UAH 2.47 mln. For this money, the overcoat, and color of the rotunda, sculptures of Samson and St. Andrew the First-Called were renovated, as well as the fountain’s engineering systems were re-equipped.

Another brand-new fountain appeared last year in the park behind the St. Michael’s Monastery. The fountain with sculpture of Archangel Michael, which soars over Kyiv, was built as part of the project of improvement of the Volodymyrska Hill park. The cost of work amounted to UAH 67.7 mln, according to the agreement, UAH 9.5 mln was spent on the fountain. A sculpture of Archangel Michael for the fountain was presented by patrons.

This year the Kyiv mayor has already managed to open a new fountain in Navodnytskyi Park. The park on the banks of the Dnipro river near the monument to the founders of Kyiv has long been one of the most popular places for photo shoots. Last year, they decided to renovate it: they replaced the overcoat, made wheelchair ramps, bins, latrines, and equipped a light fountain. This repair cost a modest UAH 14 mln (UAH 9.7 mln and UAH 4.5 mln). It is more difficult to calculate how much of it was spent on the fountain because some work on it is indicated in the general estimates — but this is at least UAH 4.3 mln.

Moreover, this year, a small and cozy fountain has already been launched in the square on Volodymyrskyi passage (between Saint Sofia Cathedral and Mykhailivskyi Monastery). Reconstruction of the green zone itself (with cost of UAH 4.05 mln) is still ongoing, but the fountain has already been opened. According to the estimate, it was supposed to cost about UAH 350,000.

Considering the most notable reconstructions and construction of fountains in Kyiv, on the one hand, it appears that this type of affordable recreation for citizens is not too burdensome for the budget. Especially in comparison with the same famous parks, where tiles, latrines, and bins amount to tens and hundreds of millions of hryvnias. On the other hand, it is noticeable that the life expectancy of fountains is not too long — several years, and then they need repairing. In addition, each fountain involves maintenance and conservation for the winter, which means annual additional costs, which sometimes reach millions per year (as in the case of the Rusanivskyi channel). However, only one visit to the square with the “lifeless” fountain (as on Poshtova Square or the Pears on Pozniaky) immediately reminds that a city walking location without a fountain is a desert that does not attract, but scares people away.