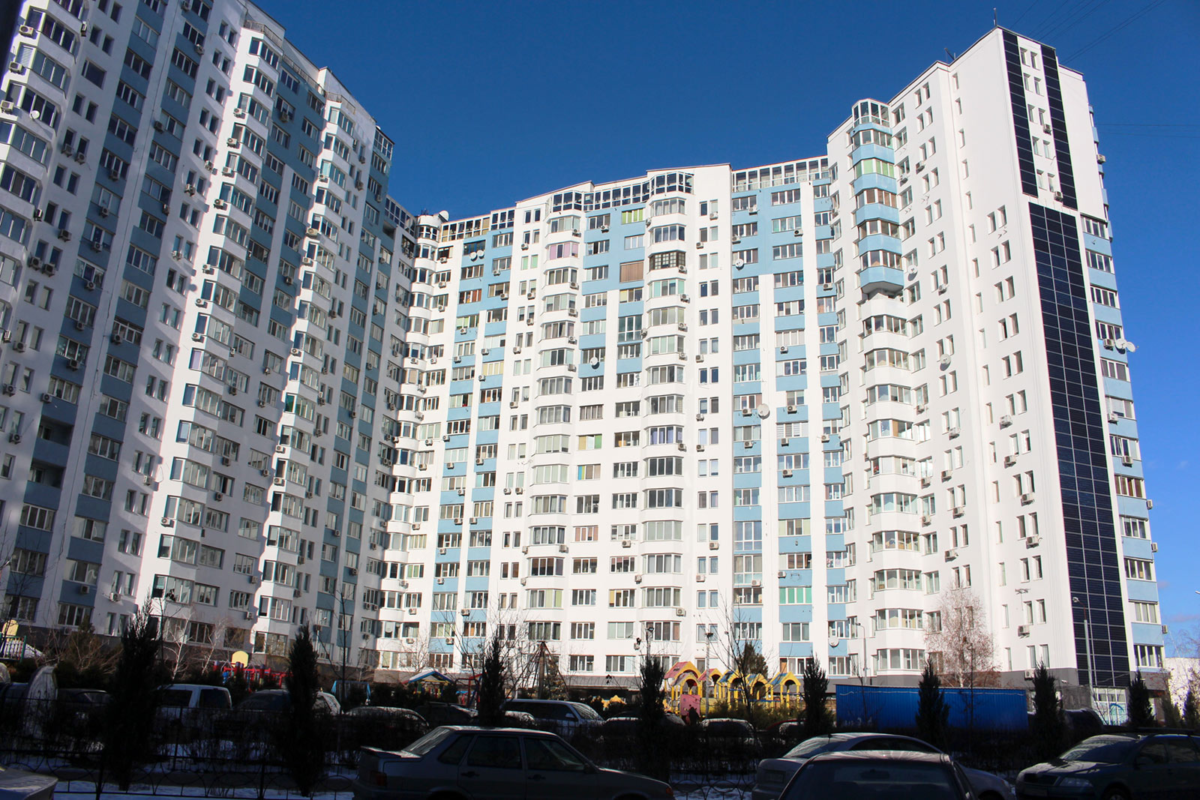 Thermal Modernization of Houses in Kyiv

How much did it cost Kyiv residents to make their homes more energy efficient partially at the expense of the state?

With onset of cold weather and new market prices for gas, people almost in every household think of how to make the house warmer and its maintenance cheaper. In those apartment buildings where residents thought about this even after the first wave of rising energy prices in 2014-15, they already had the opportunity to take advantage of state and local thermal modernization programs with the help of budget funds. How and for how much was it implemented in Kyiv — we’ll figure it out by example.

“Oberih” (Lucky charm) of the program

The building on Pozniaky, whose wall is decorated with solar power plant batteries, is noticeable from afar. A residential building on Bazhan Avenue, 16, appeared here in the line of buildings of a relatively new wave — in the first half of the 2000s. However, the spectacular and modern house was without insulation from the developer. Ten years later, a housing cooperative was established here, the chair of which actively began to search for ways to improve both the heating and payment systems. Housing cooperative “Oberih” in a matter of years implemented several projects of insulation and energy efficiency in partnership with the Kyiv city administration.

The 70/30 city program provides for competitive selection of housing cooperatives and other associations of residents of apartment buildings to co-finance thermal modernization measures. The main condition is the ability (supported by financial documents) and the desire of residents to pay 30% of the cost of insulation. The remaining funds will be provided by the city authorities. The offer is very attractive, moreover, the future result of such a rather modest investment of personal funds is savings on heat payments for years to come.

Housing cooperative “Oberih” has implemented three such system projects at once:

Solar panels have become a particularly spectacular event because green energy is a global trend, and now it is finally supported in Kyiv, even at the level of such a socially oriented program.

The pace and frenzied success of this house was all over the news, the housing co-ops became the “showcase” of the city’s 70/30 program, and its chair Valerii Nikitchenko headed some associations of heads of co-ops, including the board of the Association of Cooperative Housings of Kyiv.

What else was done under the program?

According to information provided by the Department of Housing and Municipal Infrastructure of the Kyiv City State Administration, in recent years, approximately UAH 100 mln a year has been spent on projects of the competition for thermal modernization of the program. In 2021, the expected expenses may amount to UAH 155 mln. Let us remind you that this is 70% of the cost of projects, and another 30% is paid by co-ops.

What were these funds used for?

First of all, most often, houses are repaired, reconstructed, or new individual heating stations are installed. These are automated installations that transmit heat energy from external heating networks (boiler station) to the heating and hot water supply system. Insulation of facades, replacement of windows and doors in entrances are also performed quite often. It is also popular to install motion sensors that turn on/off lights in entrances and replace lamps there with energy-efficient ones. A little less often — new meters for hot water and heating are installed in houses, or roofs and basement floors are repaired and insulated. Even less often, the program is used to repair or re-equip electrical networks or reconstruct heating and hot water supply systems using renewable or alternative energy sources. It is for this purpose that “Oberih” installed solar panels.

Since housing cooperation must also invest its funds — which means that these costs will be included in the tariff of the house or residents separately collect money for the project — the association must calculate its capacity and align its desires with opportunities.

The housing cooperative of the house next to “Oberih” — on Bazhan Avenue, 14, — decided to approach spending in moderation. They did not strive for solar panels, and most of the measures were taken within the usual tariff for the maintenance of the house territory, without an additional fund.

“We replaced windows under the 70/30 program, and now we are also replacing doors under it. This is about UAH 1.5 mln from the city. Thanks to these measures, we upgraded the heating station (at our expense), and also insulated the facade of one wall of the house, the coldest, under to the district 70/30 program. For this event, funds were raised specifically by residents of apartments in which this wall was located, and the co-op was a party to the transaction,” stated Viacheslav Masonskyi, the representative of the housing cooperation on Bazhan Avenue, 14. He also stressed that the members of the co-op introduced changes to the Charter of the Association, which forbade taking on loans. Therefore, those projects were chosen that co-op could realize on their own.

Every year, the city spent 10-15% of the total budget of the 70/30 projects on the Oberih project. In total, in the energy efficiency of one house, USD 1.5 mln was invested.

The winner of all three tenders of this housing cooperative was the same company — TOV Universalbud 2000. It is registered at the same address as the house where it was a contractor — there’s nothing special about that. However, the fact that within the framework of the 70/30 project, this company was a contractor only for this object — is quite an important detail. Perhaps, this is somehow explained by the fact that at the time of the start of cooperation between “Oberih” and Universalbud 2000, the founder of this TOV was Valeriia Nikitchenko, the wife of the chair of the co-op, and Iryna Kalman, partner in his law firm.

And that’s not all bad news. Special equipment for self-heating of the heat carrier and hot water to the network of the house (the second stage of the project) has not yet been put into operation. This is because the housing cooperative expected to heat water at night, at the cheapest tariff, but the conditions for energy supply changed before the equipment was ready, and there was no such tariff for co-ops. Therefore, the equipment is available, but it is located in basements, and the heat supply scheme had to be urgently changed. The situation with solar panels is also unclear. Now, according to the head of the housing cooperative, the energy they produce is used to light corridors and elevators. However, the housing cooperative no longer has the right to sell this electricity at the “green tariff” under the new market conditions.

That is, now the house has made thermal modernization, received good tariffs as for the city (data from the city’s specialized website, where you can view the cost of heating in city houses by month) and the quality of heat in apartments (reviews of residents). However, the budget paid more than UAH 30 mln for this, and residents of the housing cooperative are still paying their share of the loan.

Who are the contractors?

In fact, in addition to the “wow house,” there are hundreds of other co-ops that have successfully implemented much smaller programs and are happy with the result.

The procuring entity of all works under the 70/30 program since 2016 is a separate ME — “Implementation group of the energy saving project in administrative and public buildings of Kyiv.” Its procurement transactions are usually less large-scale than those described above, and range from UAH 0.5-1.5 mln. If you view the analysis of contractors of this ME, there are some leaders who take several dozen orders under the 70/30 program annually. Among them is TOV Energo-Invest, which actually works almost exclusively with procuring entities from the Department of Housing and Municipal Infrastructure of the Kyiv City State Administration (as well as with ME Kyivvodfond, ME Kyivteploenerho, ME Kyivkomuservice, ME Kyivzhylspetsexpluatatsiia). It is not possible to establish links between this enterprise and the KCSA, but the total amount for hundreds of contracts worth hundreds of millions is quite eloquent. Another similar leading contractor is TOV Building Technologies Systems, which also receives main orders from the Implementation group and Kyivteploenerho.

Good news for the mentioned contractors and for the residents of Kyiv as well — the 70/30 program is still in force, and this autumn, there is a competition for projects for thermal modernization.

In addition to it, the city has recently created another specialized ME — the municipal institution “Fund for modernization and development of the housing resources of Kyiv.” The KCSA made such a decision on October 7. UAH 400 mln was invested in the authorized capital of the new institution.

It will form a so-called revolving fund (repayable funds), which will provide loans to associations of co-owners of houses. The funds are promised to be lent at 3% per annum. The loan volume should not exceed 75% of the annual income of the housing cooperative, the loan amount will be multiplied by the number of years of repayment. That is, the city budget expands the possibilities of thermal modernization of houses, and will continue to moderate this process, but now not only on the basis of grant-in-aid, but also at the expense of house owners.