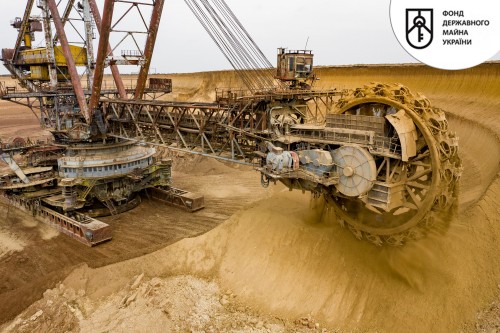 An auction for the sale of the United Mining and Chemical Company will take place in a month. In this regard, we decided to remind you what kind of asset this is and why it is so important.

The United Mining and Chemical Company has a critical mission — to successfully open a new chapter in the history of large-scale privatization in Ukraine after 16 years of waiting.

The auction for the sale of the country’s flagship in mining industry is scheduled for the end of August this year. Special attention is focused on the privatization of the UMCC, including that of the international community, because the competition will be a test for the country’s readiness to work for results — to overcome corruption at state-owned enterprises, conduct open and transparent auctions, engage international investors, and ensure that the projected amounts are received by the state budget.

Ukraine ranks 1st in Europe and is one of the leading places in the world for the extraction of titanium ores (4% of world production). AT United Mining and Chemical Company, which was established in 2014, is the largest miner of titanium ores in Ukraine. The company includes Vilnohirsk Mining and Metallurgical Plant and Irshansk Mining and Processing Plant.

The company is the largest one in Europe for the extraction of titanium ores (ilmenite, rutile) and zirconium of the highest quality. The total volume of deposits is estimated at 12 million tons. The enterprise exports its products to 35 countries around the world. In 2020, UMCC’s net revenue amounted to USD 116 mln.

Starting price for the sale of Ukraine’s extractive industry’s giant is estimated at UAH 3.7 bln. Prime Minister Denys Shmyhal states that such an attractive object already has more than 10 potential buyers from different countries.

However, a logical question arises: if the object is so profitable and unique, why is the country selling it?

In our previous material using the example of another most important state-owned enterprise put up for privatization — PAT Centrenergo — we proved that large companies in the hands of the state are a corruption risk and a tool for enriching oligarchic groups. The UMCC is no exception.

Since 2004, the Vilnohirsk and Irshansk UMCC plants have been of great interest to oligarch Dmytro Firtash and providing raw material needs for his company PrAT Crimean Titan in Armiansk, Crimea. After the Revolution of Dignity, the SPFU terminated the lease agreements with Group DF (DF — abbreviation Dmytro Firtash) for the supply of raw materials for the Firtash plant in Crimea.

In 2014, Ruslan Zhurylo was appointed general director of the UMCC, who, according to media reports, was a member of the entourage of ex-MP Mykola Martynenko, who was accused of embezzlement of funds at other state enterprises — NNEGC Energoatom and Eastern Mining and Processing Plant.

In January 2017, Ruslan Zhurylo was detained by the NABU under the so-called UMCC case. As a result of organizing a scheme to resell the extracted ore through shell companies controlled by the UMCC management, the company caused damage to the state amounting to almost USD 13 mln.  By the way, one of the companies through which ore was exported from the UMCC is now trying to sue the latter for almost UAH 5 mln. Let us remind you that all court costs of state-owned enterprises are covered by taxpayers’ funds.

It should be noted that the dismissal of Ruslan Zhurylo from the post of the UMCC head in 2017 did not reduce his influence over the company — his first deputy Oleksandr Hladushko took over the business. The scheme for selling titanium ore at reduced prices to shell companies continued functioning until 2020, when Hladushko was replaced by Peter Davis, British financier and acting head of Board. However, with the appointment of a foreigner, the situation in the UMCC has not changed.

In April 2020, the SPFU reported attempts of hostile takeover of the company by the former management. At the same time, the control was gained over the official website of the UMCC. The control over the page was obviously never restored, since the latest publications in the section “News” are dated 2020 and are full of negativity towards the new management of the company and the head of the SPFU. Now the UMCC has a new website.

Also in May 2020, the media published reports of criminal actions against top management of the company’s financial sector. First, unknown people broke into the apartment of a board member, who was responsible for the financial direction, and stole a laptop and work documents. A few days after the incident, the car of the head of the department of economics and finance of the enterprise was set on fire.

In January 2021, the SPFU again reported searches at the company’s central office and linked this to attempts to disrupt the privatization of the object.

UMCC and trade with the occupied territories

During the investigation of ore resale schemes in 2017, the NABU published recording of a phone call of one of the suspects. This audio showed that the UMCC company was supplying titanium ore to the temporarily occupied territories of Donetsk and Luhansk regions through intermediaries. And in May of this year, a new scandal broke out — the UMCC was accused of ilmenite concentrate shipment through a shell company to Firtash’s plant in the occupied Crimea. It is Firtash who can act as the main beneficiary of this scandal, the purpose of which is to scare off competitors at the auction for the privatization of the UMCC and keep the company, de facto, in his sphere of influence.

Mining activity of heavy industry enterprises always carry environmental risks. The UMCC is only a sad confirmation of this.

At the moment, materials of the pre-trial investigation on the grounds of a crime under Article 239, part 1 of the Criminal Code of Ukraine, are in the proceedings of the Verkhnodniprovsk Police Department on the fact of contamination and damage to land as a result of industrial activity of the Vilnohirsk combine of the UMCC.

According to the content of the judicial decision, the fact is that the enterprise uses agricultural land plots without registration of title deeds for the placement of power lines and the technological process of mining, as well as contaminates state and municipal property lands with industrial waters.

In addition, the UMCC arbitrarily occupied 5 land plots with a total area of 217.4 hectares, which is equal to the territory of 217 football fields!

Privatization of UMCC — a panacea for oligarchic influence?

The chances of losing oligarchic control over the enterprise are growing because on June 24, the President of Ukraine put into effect the decision of the National Security and Defense Council which imposed sanctions on Dmytro Firtash, in particular, banning him from taking part in privatization and cancellation of permits for the use of mineral resources. It is also possible that before the auction, the Verkhovna Rada will have time to vote in the second reading for the new so-called “law on oligarchs” and Dmytro Firtash (and not only him) will be included in the corresponding list. Despite different views on the quality and viability of this law, its draft also contains provisions on the prohibition of procurement of large-scale privatization objects by a person who is recognized as an oligarch, or by a company whose beneficiary is such a person.

If the new owner of the UMCC becomes an effective manager, then the company is expected to be developed, including in environmental policy. The State Property Fund announced mandatory modernization, environmental, and social guarantees for the enterprise; compliance with them is a condition for potential buyers. In particular, it is required to make at least UAH 400 mln of investments for re-equipment and providing employees with social guarantees. Moreover, strict compliance with the requirements of environmental legislation, including regarding soil and water pollution, is spelled out. Time will tell whether this will help resolve the above-mentioned criminal case on land damage, and whether the new owner of the company will be interested in compensating for the losses caused by the “predecessors” if the guilt is proved. It is important that for a new investor, the company’s controversial past does not become an unexpected unpleasant bonus.

Of course, there are high hopes that the privatization of the UMCC will become a panacea for all the long-term corruption schemes in which the company is featured, and the NABU will cease to play the role of a “watchdog,” which, from time to time, suppresses attempts to illegally ship titanium ore worth tens of millions of hryvnias in the port of Odesa.

According to the privatization schedule, the auction for the UMCC sale was expected in July 2021. However, the decision of the Cabinet of Ministers to approve the terms of privatization of this object was made only on June 16. Let us remind you that in accordance with the legislation, auctions can be held within 30 to 60 days from the date of publication of the informational notice on privatization with the approved starting price of the object and the terms of its sale.
It should also be noted that in the process of preparing the object for privatization, efforts were made to stabilize the company’s financial condition, which affected the growth of net profit.

Thus, the most realistic option for holding an auction was August. And so it happened — on June 22, the SPFU announced that the auction will be held on August 31.

We hope that the privatization of the UMCC will no longer be postponed, and hopes for an efficient, profitable enterprise, devoid of the influence of oligarchs, will not remain just hopes.