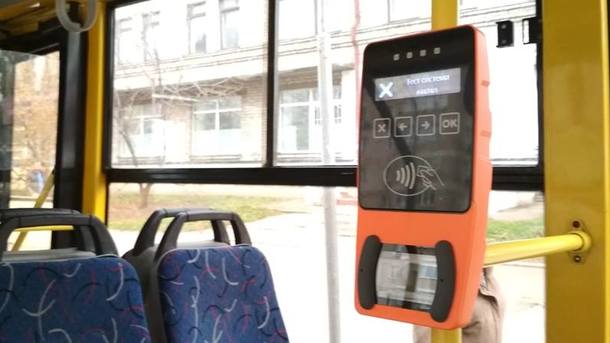 Why Is PayPass Unavailable in Kyiv Trolleybuses?

Kyiv got rid of paper tickets on public transport, but did not allow passengers to pay by bank card, as can be done in the subway. We tried to find out what prevented it from happening.

A month has passed, since Kyiv finally got rid of paper tickets in urban ground transport. Now, there are no conductors on trams, trolleybuses, and buses, and the driver also cannot charge the fare from those who remembered about it inside the transport. You can only pay using:

The latter can be purchased in special terminals and T-kiosks.

Kyiv’s residents often complain that kiosks with tickets are not available at all stops, but they are gradually adapting to changes. However, for passengers who use public transport on an irregular basis, city guests, and especially foreign tourists, paying for ground transport has now become a real quest — the driver does not communicate, there is not always someone to ask, and it takes time and knowledge of the language to understand the app. It would be easier for such passengers to pay with a bank card using PayPass (a card, smartphone, or watch with Apple Pay or Google Pay). However, it is this opportunity that the “digitalized” public transport of Kyiv does not yet have.

This causes some confusion. First of all, paying with PayPass in the subway has been possible for a long time, and this method has proven itself well: the number of transactions is growing, queues at ticket offices are being reduced, and now all new subway turnstiles are being equipped with terminals to pay with a bank card. Secondly, the KCSA repeatedly mentioned plans to introduce similar functionality in the ground transport.

Interestingly, just two years ago, the introduction of PayPass was promised to be realized “any minute now”: “the launch of the system is scheduled for November,” said Yurii Nazarov, the then director of the Department of Information and Communication Technologies, in 2019. “In the autumn of 2020, passengers will be able to pay the fare with bank cards,” promised mayor Vitali Klitschko last summer.

Apparently, this is why even now, after the cancellation of paper tickets, some media outlets still write that the updated payment system is incomplete, and soon it will be possible to pay with a bank card. However, we clarified this issue directly with the KCSA, and it turns out that there are no such plans yet.

“The possibility of paying for travel in ground public transport of Kyiv using a bank card has already been implemented. In particular, with the help of a bank card, a passenger using the mobile application Kyiv Digital can replenish the transport resource of the transport card of the automated fare accounting system in urban passenger transport, regardless of the form of ownership, or purchase a one-time electronic ticket, whose identifier is a QR code (on paper or in electronic form) and validate it on the ground transport or in the Kyiv Metro,” such was the answer of the Department of Information and Communication Technologies of the KCSA, which is responsible for the program of electronic payment for travel in Kyiv transport, at the request of DOZORRO.

“Moreover, the fare in the city train, funicular, and high-speed train can be paid with a bank card at the yellow turnstiles,” says the answer.

In other words, what we have now is an already implemented program. Kyiv Digital is for all types of transport and there is a possibility to pay by bank card in three of them. Regular trams, buses, and trolleybuses are not included in this list.

Even without considering the number of previous big words of city officials, you can find out that the possibility of paying with a bank card on public transport has existed for several years in other cities of Ukraine, with budgets far much smaller than that of the capital. Zhytomyr, Vinnytsia, Chernihiv, Ivano-Frankivsk, Drohobych — this is not a complete list of cities where you can pay with a bank card in a regular trolleybus or bus. These are the regions where the share of citizens with bank cards in their pockets should theoretically be less than in the capital, as well as the number of tourists.

How much has already been paid?

The transition of Kyiv public transport to new payment methods took place within the framework of the national program of the e-ticket introduction and the Electronic Capital Program. At the preparatory stage of the capital’s program, rolling stock was tooled up with equipment for accepting electronic payments. Looking ahead, we note that it was purchased, installed, and is now in service, but the e-ticket program has not been fully implemented: now validators on ground transport function with the Kyivan card, a QR code, and the Kyiv Digital card and application. However, they do not accept bank cards and an e-ticket (the latter because it has not been implemented yet).

The procurement of new equipment for Kyivpastrans with an expected cost of almost half a billion, namely UAH 460 mln, was announced in August 2017. Budget funds were used to buy “electronic equipment (hardware components of an automated fare payment system with installed software and their assembly)” — in general 1,500 sets. The set that each vehicle was supposed to be equipped with consisted of:

Five participants submitted their bids, but the procuring entity allowed only two of them to participate in the auction: TOV IT Solutions and TOV Amrita Integrated Solutions. At the bidding, both companies reduced the price by almost UAH 100 mln from the expected cost. And the winner, with the offer UAH 365 mln, became the company “Amrita Integrated Solutions.” After all, that’s exactly how much they paid under the contract.

We asked the KSCA contractor if it was possible to simply connect contactless payment by bank card to the functionality of existing validators, and what prevented this.

“Indeed, there is such a technical possibility. The equipment installed in ground transport of Kyiv (validators) envisages the possibility of accepting payments using the PayPass technology. However, to do this, the devices need to be retrofitted with the appropriate software. The developer of this system, an Estonian company Ridango, holds exclusive copyright to the hardware and software to it. Accordingly, additional funding is required to retrofit validators with additional software,” tells DOZORRO Oleksii Petrenko, head of Amrita Integrated Solutions.

Who do the changes depend on?

A representative of the supplier also confirmed that after the change of team in the relevant department of the KCSA, the issue of implementing PayPass was no longer raised at all.

The change of team is the dismissal of Yurii Nazarov from the post of head of the Department of Information and Communication Technologies of the KSCA, who is the ideologist of the large-scale and expensive Electronic Capital program. He was dismissed in the spring of 2020. Now, as we have written this year in January’s article “Who commissioned us for you?” the Department of Internal Financial Control and Audit of the KSCA controls the implementation of this program. However, the announcement of the audit results is delayed.

Bohdan Iskov, head of one of the administrations of the specialized department, confirmed to us that the issue of financing any steps to introduce bank card payment in ground transport is not currently discussed. The corresponding procurement is not planned to be conducted yet.

Oddly enough, but the pioneers of the introduction of such a payment method in land transport in Kyiv so far have become minibuses. In the autumn of 2020, one of the carriers that serves the route in the capital’s Pozniaky  equipped its buses with terminals to pay with a bank card. In the midst of quarantine and anti-epidemic measures, contactless payment came in handy. This made it possible to reduce the amount of money that wandered around the salon from hand to hand.

“If at first there were somewhere up to a hundred card payments per shift, now it is already up to three hundred transactions per working day. This is about a quarter of all payments,” tells us the driver of route No. 250 where the terminals are installed on all buses.

That is, there is no question that the service will not be in demand in Kyiv.

Meanwhile, in the KCSA only now, more than a year after the dismissal of Yurii Nazarov, a competition has been announced to fill the position of head of the Department of Information and Communication Technologies. The selection process is still ongoing. And, in fact, the vision of the future head of the specialized department may determine whether the introduction of such a familiar and convenient service as PayPass will be in the plans of the Kyiv authorities.