The Parliament has passed amendments to the Law of Ukraine “On the High Anti-Corruption Court”!

Draft law No. 1025 was supported by 323 MPs in the second reading and overall.

What does it mean? Now, the HACC will handle criminal cases registered from the moment when the court came into operation, as well as criminal proceedings investigated by the NABU and the SAPO.

Yesterday, at the designated meeting of the specialized committee, technical amendments were made to the draft law, which specified certain aspects of HACC’s work.

We prepared stories about the most notorious corruption-related cases which HACC judges will have to examine. Some of these proceedings have been reviewed in various judicial instances for many years.

All the information provided here is to be considered up-to-date as of the date of launch of the High Anti-Corruption Court, i.e. September 5.

On July 26, 2019, the NABU and the Special Investigations Directorate of the PGO searched the premises of Kyiv Administrative Court. According to the information available to the investigators, the chief judge, his deputy and a court judge knowingly organized unlawful decision-making and interfered in the work of judicial agencies with the aim to obstruct the work of the HQCJ. The suspects allegedly wanted to avoid the mandatory qualification assessment. 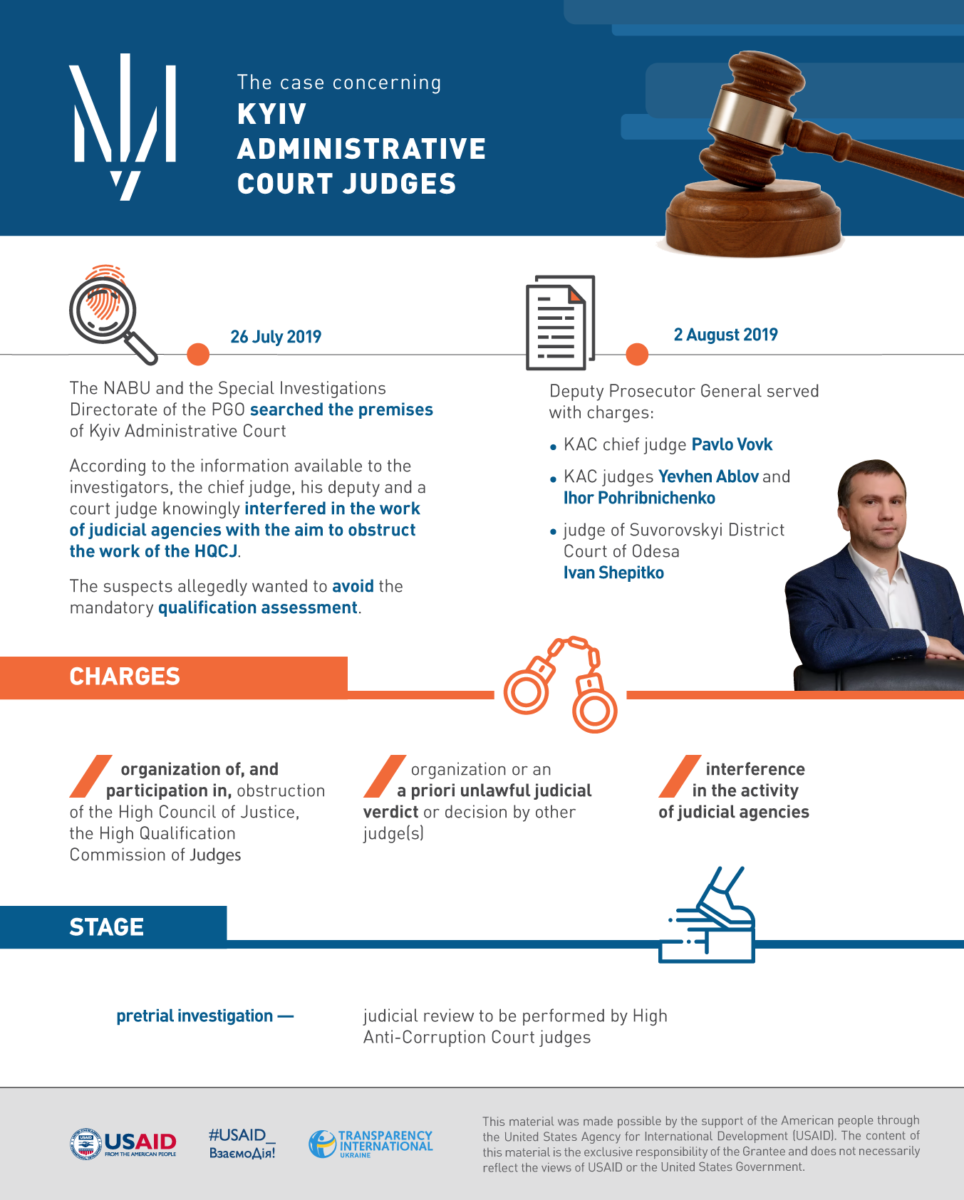 The case of judge Chaus

In August 2016, NABU detectives with the procedural support of SAPO prosecutors caught a judge of the Dniprovskyi District Court of Kyiv Mykola Chaus taking a “bribe of USD 150,000.” The money was found in two glass jars, which the judge had allegedly personally buried in his own yard.

On August 10, 2016, the head of the SAPO issued a written notification of charges for the judge. On September 6, the Parliament stripped Chaus of immunity, and Solomianskyi Court allowed to detain him. Interpol put Chaus on the wanted list in November 2016, and in a few months, on March 1, 2017, the judge was detained in Chisinau.

NABU detectives sent paperwork for Chaus’ extradition from Moldova to the PGO. Chaus’ defense claimed that they would try to request political asylum for him in Moldova.

Charges: acceptance of a proposal, promise or receipt of undue benefit by a public official. 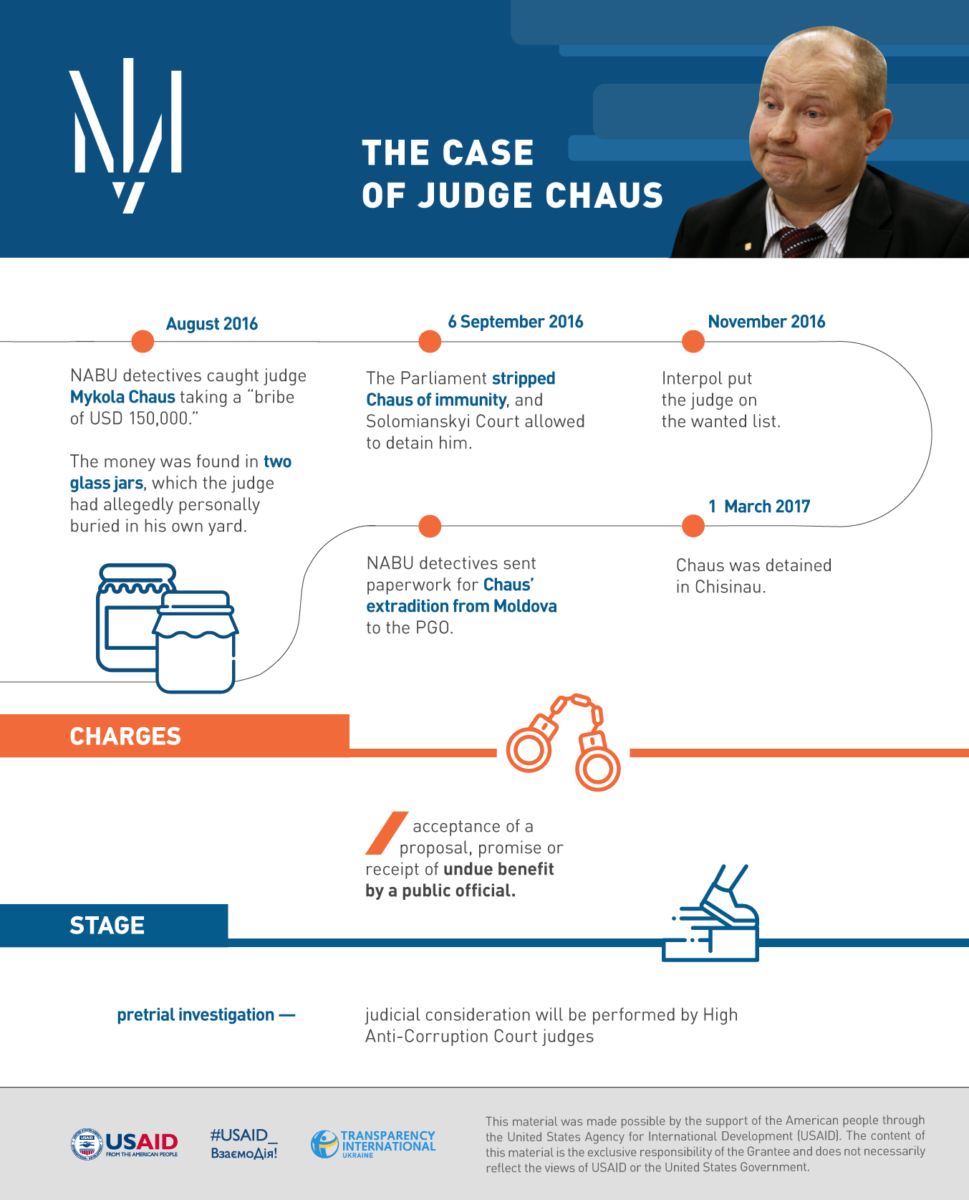 Rotterdam+ is a methodology of coal price formation for heat and power stations which was introduced in May 2016 in the situation when the control over part of Donetsk coal field was lost.

The price of fuel was calculated using the formula: the price of coal in Amsterdam — Rotterdam — Antwerp ports + the cost of its delivery to Ukraine. Between January and November 2016, the price of heat power grew twofold.

The NABU and the SAPO believe that in 2016 and 2017, consumers have suffered damages in the amount of UAH 18.87 billion, including UAH 14.3 billion received by private companies which initiated the implementation of Rotterdam+.

On August 8, 2019, the NABU and the SAPO served 6 individuals with charges, including representatives of the National Commission for State Regulation of Energy and Public Utilities: former head Dmytro Vovk, former member Volodymyr Yevdokymov, managers of units and directorates.

At the end of August, Dmytro Vovk was put on the international wanted list. On September 5, 2019, Solomianskyi court issued a permit for his detention.

Charges: abuse of power of the office. 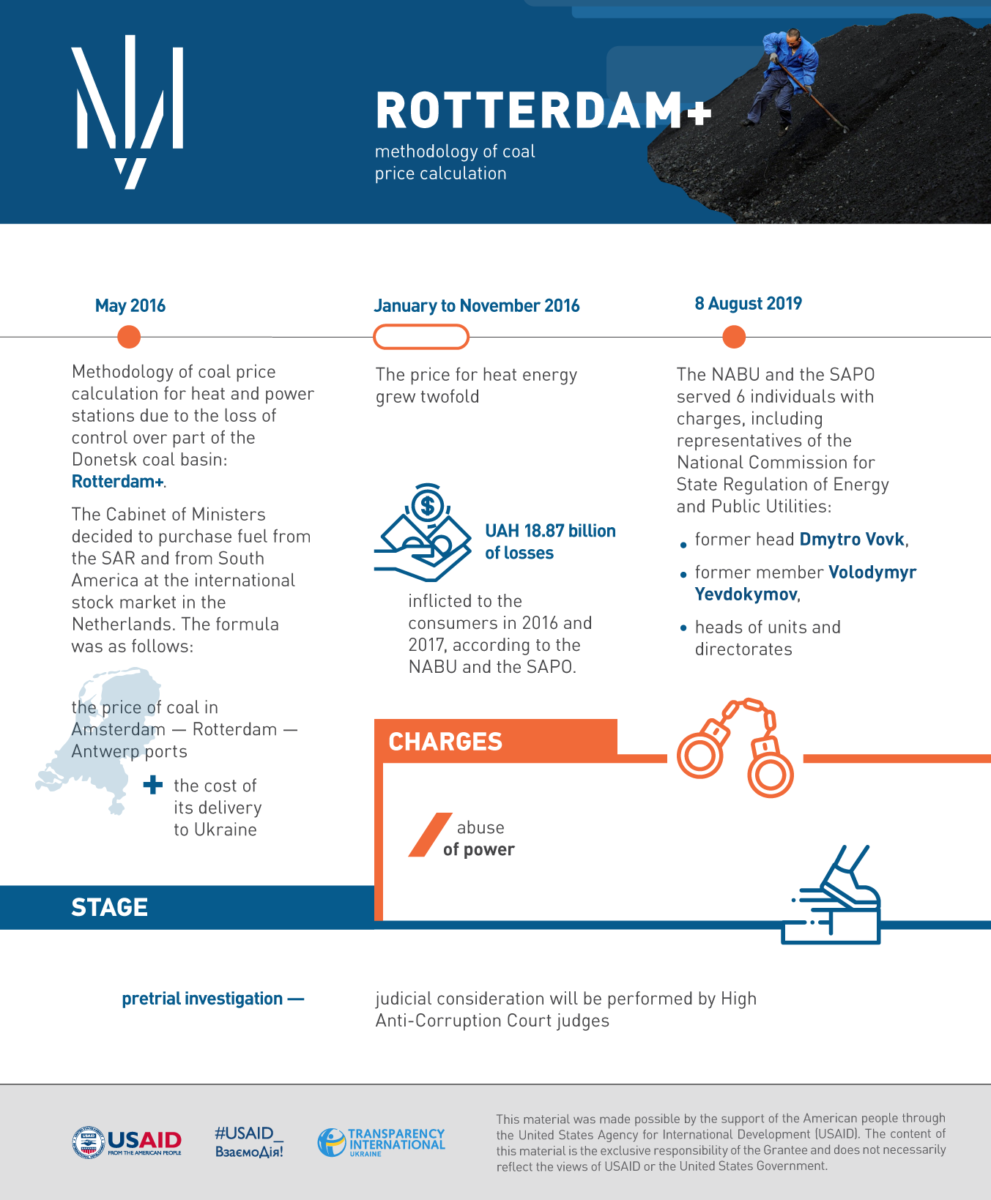 The amber case and MPs

Former MPs Borys Rozenblat and Maksym Poliakov are suspected of extortion of a bribe from a non-resident company for submitting draft laws to the Parliament and more.

In the published audio and video recordings, they speak about draft laws No. 5436 and 5437, which propose changes to the Tax Code and the Customs Code concerning taxation of amber mining and relieving entities that move equipment for industrial amber mining into Ukraine of taxes.

This case became famous because “agent Kateryna” participated in the special operation. On October 5, 2018, the SAPO sent the indictment to court. 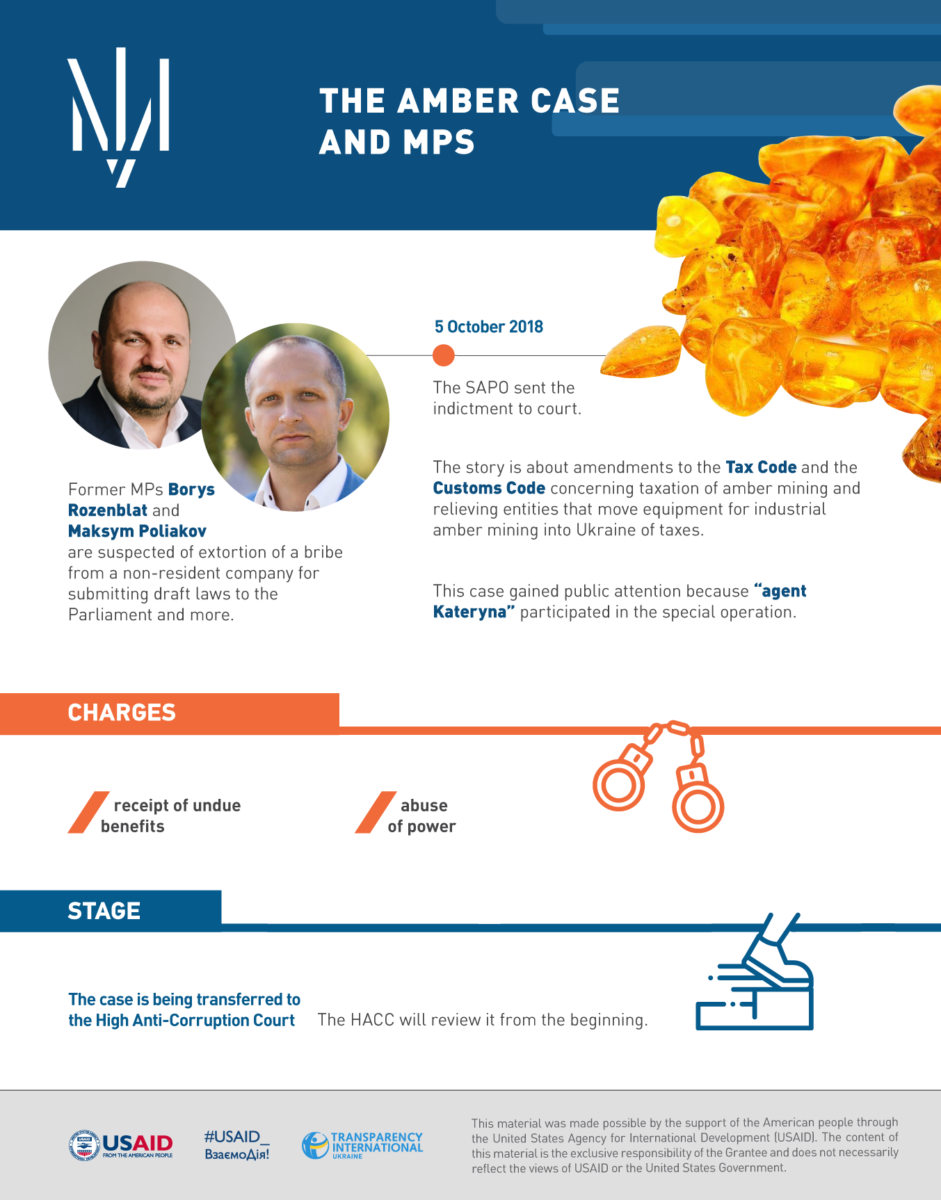 The proceeding registered in December 2015 was one of the first cases investigated by NABU detectives.

The investigation believes that between January 2013 and June 2016, members of a criminal organization illegally obtained over UAH 1.6 billion from gas sales. As a result, PAT Ukrgazvydobuvannia (UGV) suffered damages of over UAH 740 million.

The gas mined on UGV territory was allegedly sold on stock markets to predefined companies for prices close to the prime cost. The gas purchased this way was later sold by the so-called “winners” to other parties for market prices. This way, the profit that should have been obtained by the government ended up in the accounts of the scheme organizers and participants. According to the NABU, MP Onyshchenko controlled the entire chain of this scheme.

On July 5, 2016, the Parliament allowed to bring the MP to liability, but he fled the country the day before.

Overall, the investigation implicated 29 individuals in the scheme, including the Head of the State Fiscal Service Roman Nasirov.

As of the end of 2017, Onyshchenko was staying in Spain, where he was granted asylum. At the same time, a special pretrial investigation concerning him started in Ukraine in his absence. On February 18, 2019, the SAPO sent an indictment concerning him to court.

Oleksandr Onyshchenko: creation of a criminal organization, appropriation or embezzlement of money or obtaining money by abusing the office, fake enterprise, forgery of paperwork for state registration of a legal entity or sole proprietor, abuse of power, forgery in office, laundering of funds obtained through crime, illegal action concerning seized property or property subject to confiscation. 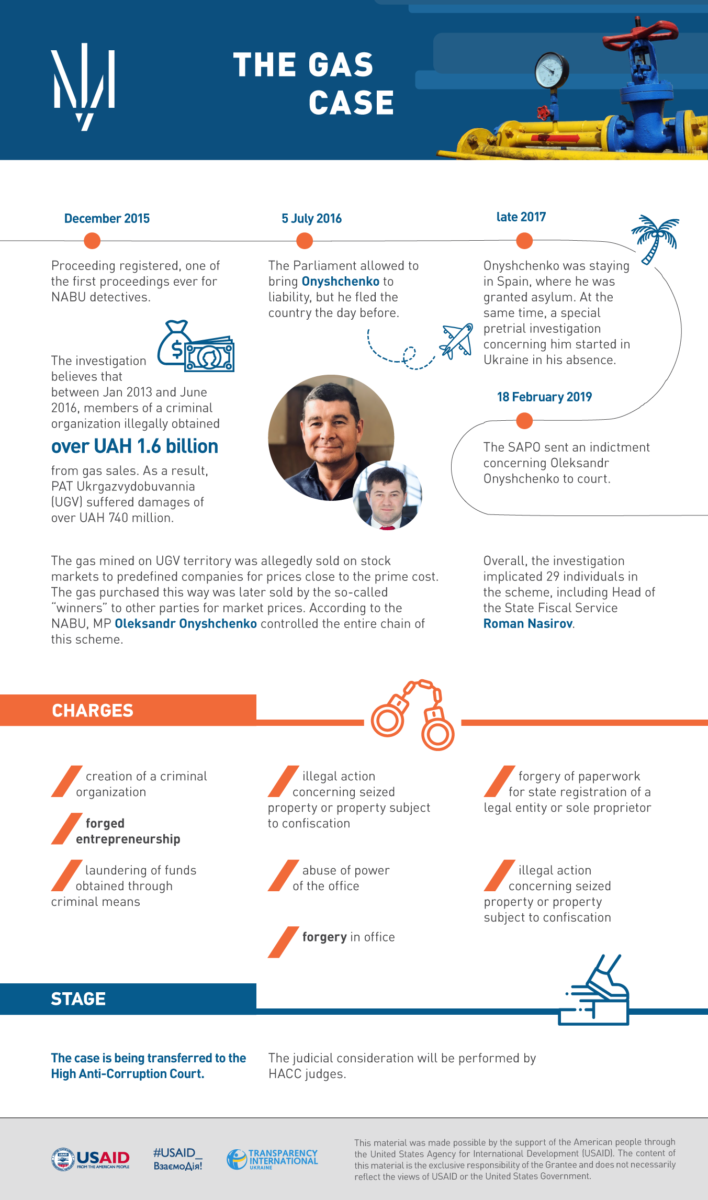 According to the investigation, Roman Nasirov is one of the participants of the “gas scheme.” During 2015 and 2016, acting for Onyshchenko’s benefit, Nasirov ordered the heads of regional and territorial SFS agencies to make unfounded decisions on extending the payment period for the tax debt of companies with ties to the MP.

In January 2018, the government dismissed Nasirov from the position of the Head of the SFS due to “loss or restriction of the right to holding public office due to the official obtaining citizenship of a different country.” And then, in December 2018, judges of the notorious Kyiv Administrative Court restored him in office by their decision. 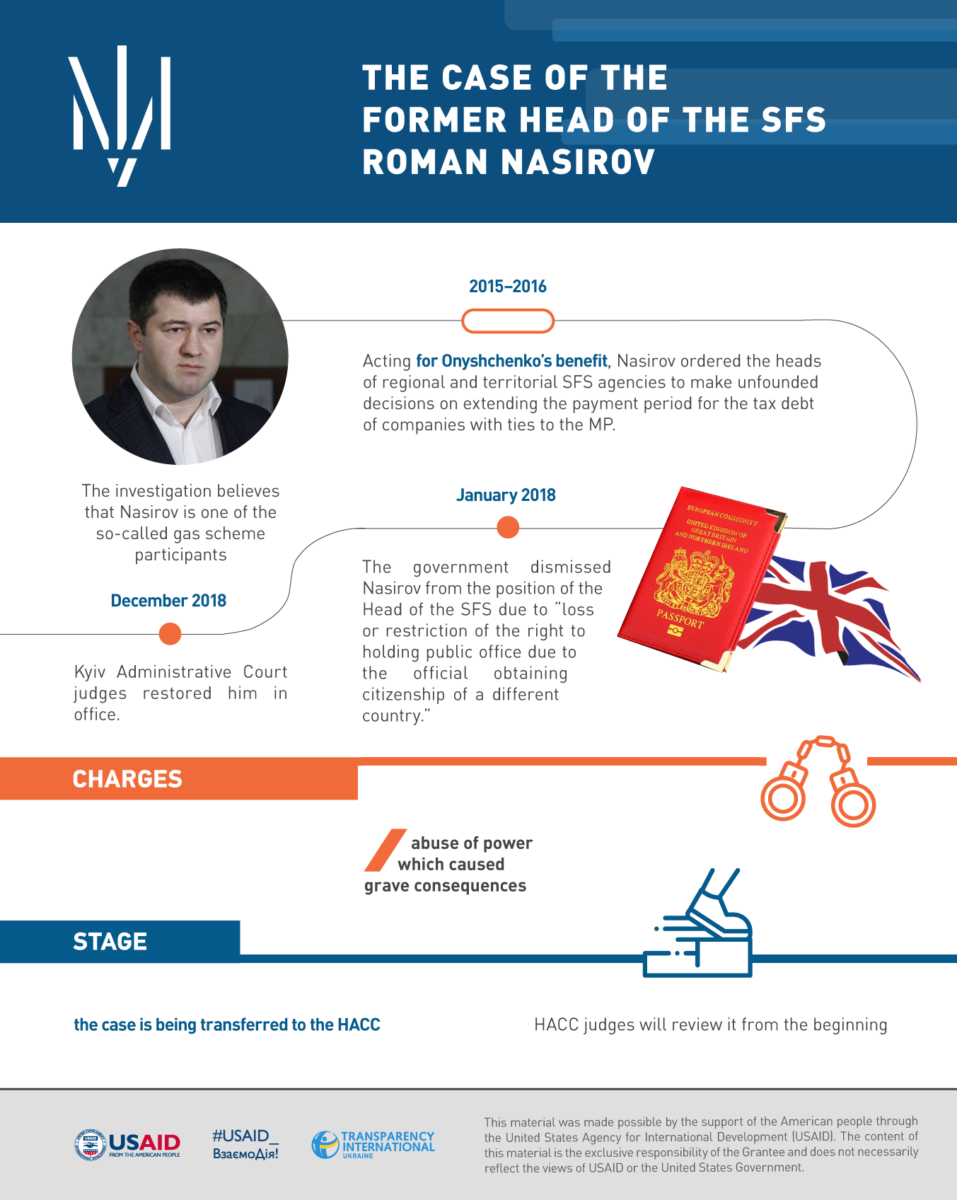 The case of Ukroboronprom

On February 25, 2019, journalists of Bihus.info published the investigation where they disclosed that Ihor Hladkovskyi, the son of the National Security and Defense Council Deputy Secretary, and CEO of Ukroboronprom Pavlo Bukin were direct participants of embezzlement scheme in the defense complex.

The journalists received information that in late 2016 and early 2017, Ukroboronprom purchased Russian parts for AN-26 planes, paying times five for them. They cost Ukraine UAH 14.38 million, even though while flying out of Moscow, they cost UAH 2.3 million.

On February 26, the NABU started a criminal proceeding based on the fact of possible embezzlement by Ukroboronprom officials. It is far from the first proceeding on embezzlement in the defense complex. The cases opened during the last three years are also overseen by the PGO.

On March 7, 2019, the NABU performed a number of searches in the offices and apartments of possible embezzlement participants. Almost immediately, Petro Poroshenko issued an order to dismiss NSDC Deputy Secretary Oleh Hladkovskyi.

On June 27, the NACP identified false information in Oleh Hladkovskyi’s declarations. On July 17, 2019, NABU detectives summoned him for questioning.

Charges: misappropriation, embezzlement or obtainment of property by abusing the office. 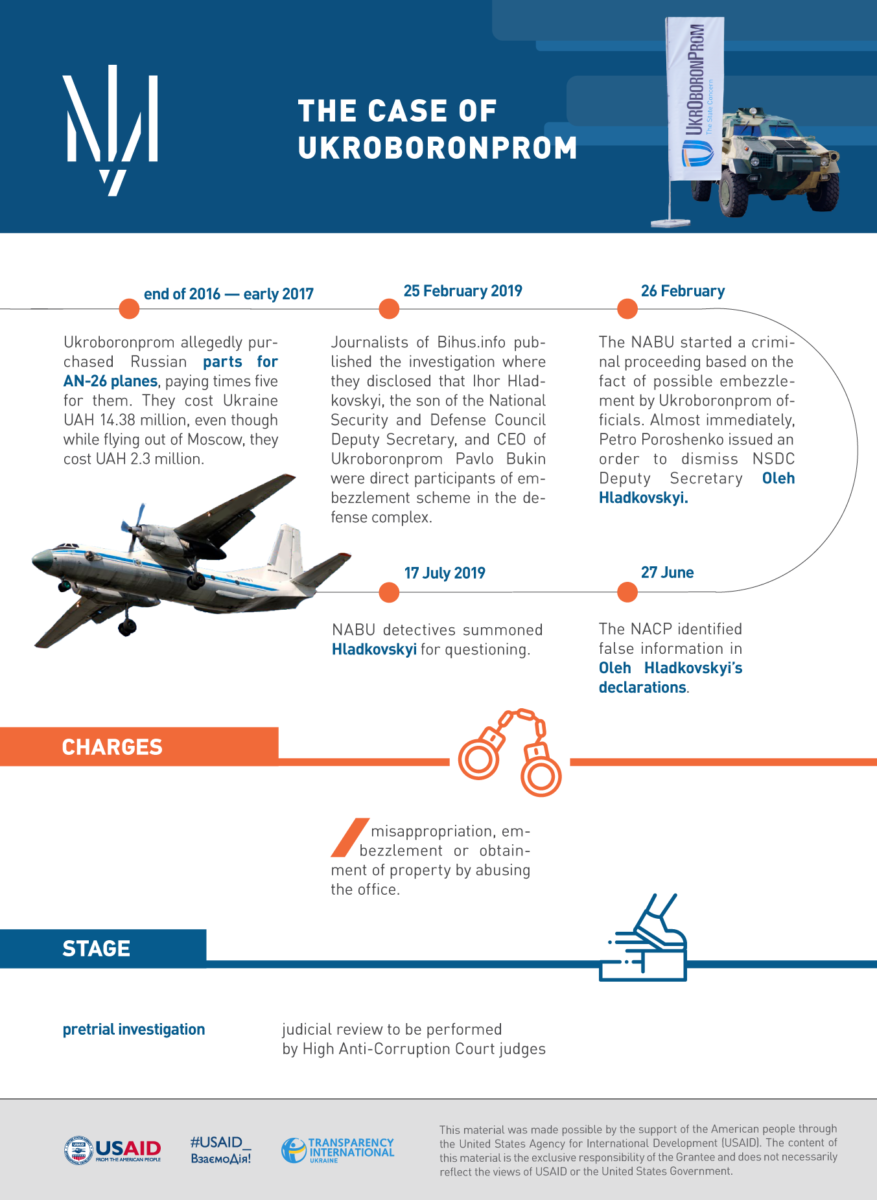 The case of former MP Martynenko

The SAPO accuses former MP Mykola Martynenko and Naftogaz Ukraine official Valerii Vasylkov of obtainment of Energoatom’s funds when they concluded and implemented equipment supply contracts for over USD 6.4 billion.

Besides, the Prosecutor’s Office accuses Martynenko and a number of people of obtaining the funds of SE SkhidHZK in the amount of USD 17.28 million. There was a possible unlawful conclusion and implementation of the contract for purchase of uranium concentrate for the SE through an Austrian intermediary company controlled by scheme participants.

The NABU detained former MP Martynenko on April 20, 2017. On April 22, the court released him on bail to his colleagues from the People’s Front faction and ministers.

On October 22, 2018, Shevchenkivskyi District Court of Kyiv started in rem examination of the case.

Charges: laundering of money obtained through criminal activity and creation of a criminal organization. 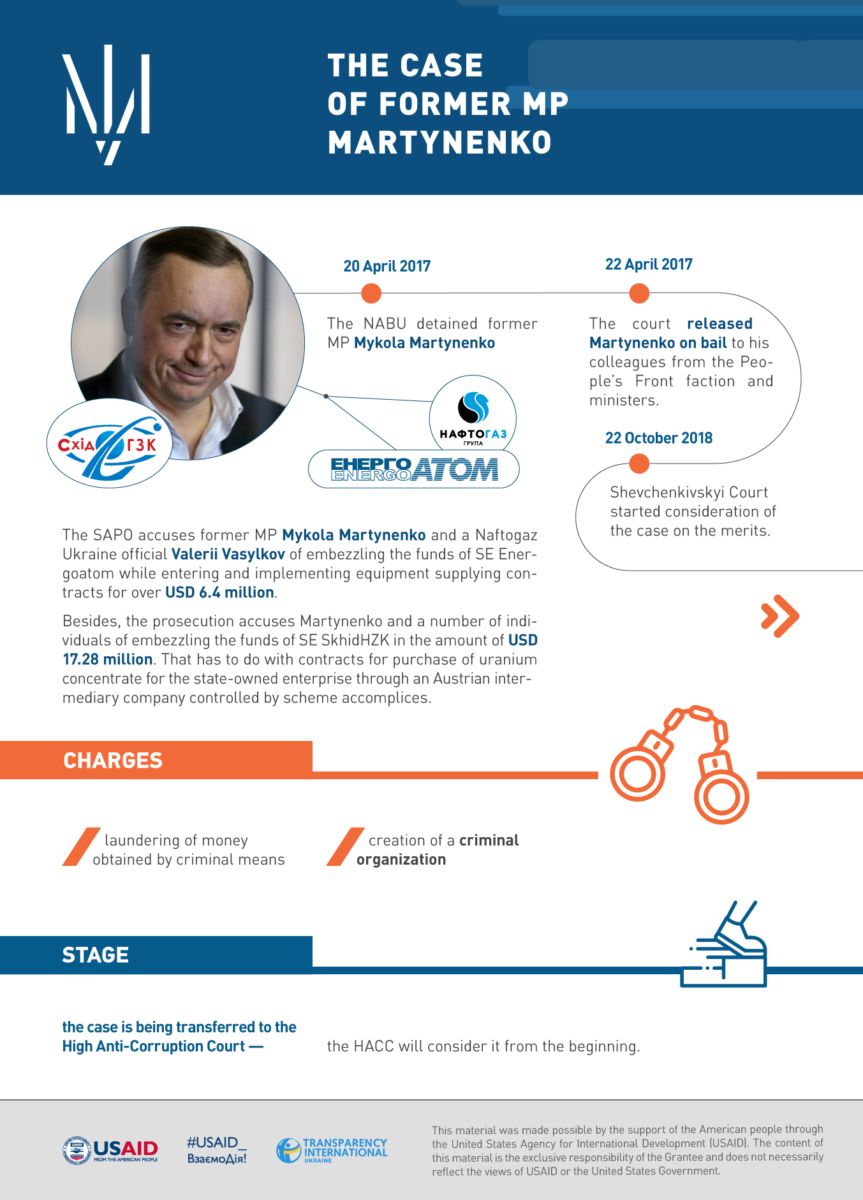 The case of Odesa mayor Trukhanov

No. 1. In 2016, Odesa city council made the decision to buy out the ruins of Kraian plant to restore the real estate and move all the city hall agencies into one building. However, Kraian was initially too small for this purpose.

The previous owner, TOV Development Elite, purchased this real estate for a price almost 43 times as low, and then sold to the city for UAH 185 million. The investigation believes that this scheme was “set in motion” by city mayor Trukhanov and his deputy Pavlo Vuhilman.

On July 9, 2019, Malynovskyi district court of Odesa ruled that Odesa mayor Trukhanov and other accomplices were not guilty of misappropriation of budget funds.

Most evidence collected on this case was not accepted by the court, among other things — due to procedural violations in the course of its collection. One of the most important proofs not recognized by the court includes the assessment and construction expert review. The judges declined the experts’ opinions, since the review of Kraian premises took place without witnesses.

What is more, the court rejected the evidence obtained through international cooperation with other countries because, according to the court, the detectives violated the thirty-day period established by the judge to fulfill the request on international help.

Besides, the judge decided that mayor Trukhanov was served with charges in a wrong way, since it should have been done personally by Head of the SAP Kholodnytskyi.

Stage: the case will be reviewed by High Anti-Corruption Court Appeal Chamber.

No. 2. On March 11, 2019, the SAPO served Trukhanov with charges concerning including untruthful information in his 2015 and 2016 electronic declarations. Among other things, the investigation speaks about an apartment, two parking spots, commercial real estate and two cars. Overall, the Odesa mayor allegedly failed to include property for UAH 32.48 million in his 2015 declaration, and for UAH 18.81 million — to his 2016 declaration. 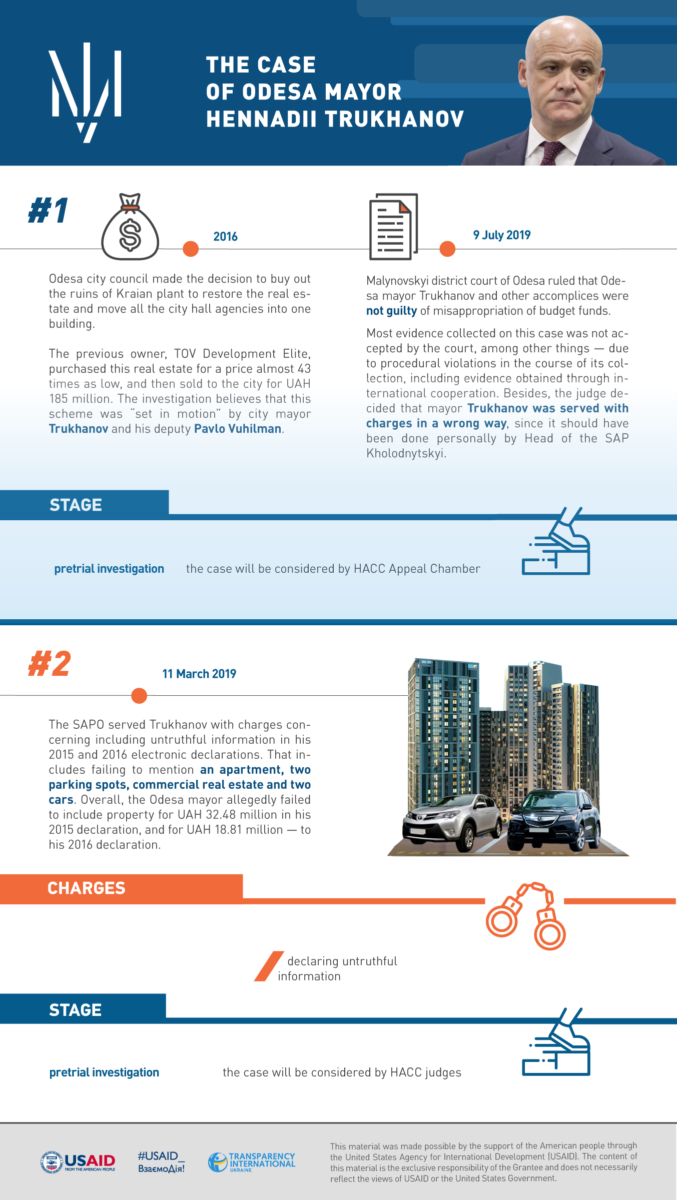