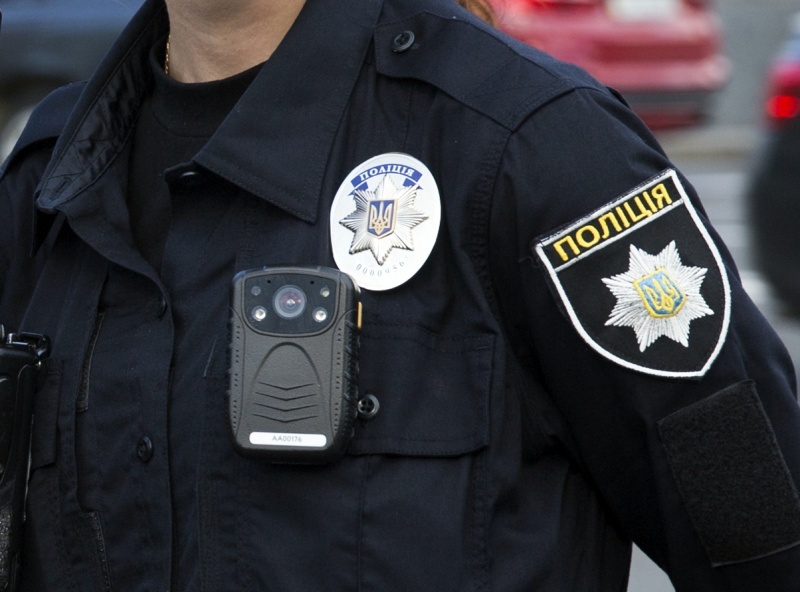 Changes in Procurement of MIA with New Minister

Cost analysis of the MIA in Prozorro.

On July 16, the Verkhovna Rada appointed Denys Monastyrskyi as the new minister of internal affairs. He replaced Arsen Avakov, who resigned after seven years in office. Arsen Avakov held this position longer than all his predecessors. It was during his leadership that the police was reformed into the National Police. It is him that experts hold responsible for both the success of the reform and its failures. He is also known for a long-term and fruitless investigation of Pavlo Sheremet’s and Kateryna Handziuk’s cases, corruption scandals with procurement of backpacks for the Ministry of Internal Affairs at inflated prices at the enterprise controlled by the Avakov family, and procurement of hybrid cars for the police with an overpayment of UAH 240 mln.

We decided to analyze whether the procurement of the Ministry of Internal Affairs has changed with the change of the minister.

Is there less spending?

First of all, it is worth noting that the general budget of the agency was planned for a year, even before the arrival of Monastyrskyi. Since 2018, the volume of procurement of the Ministry of Internal Affairs has been constantly growing. In 2018, the ministry’s expenditures amounted to UAH 8.9 bln, in 2019 — UAH 9.5 bln, in 2020 — UAH 16.2 bln. In 10 months of 2021, bodies from the structure of the Ministry of Internal affairs purchased goods, works, and services worth UAH 9.4 bln through Prozorro. For the same period of 2020, such expenses amounted to UAH 14.1 bln. 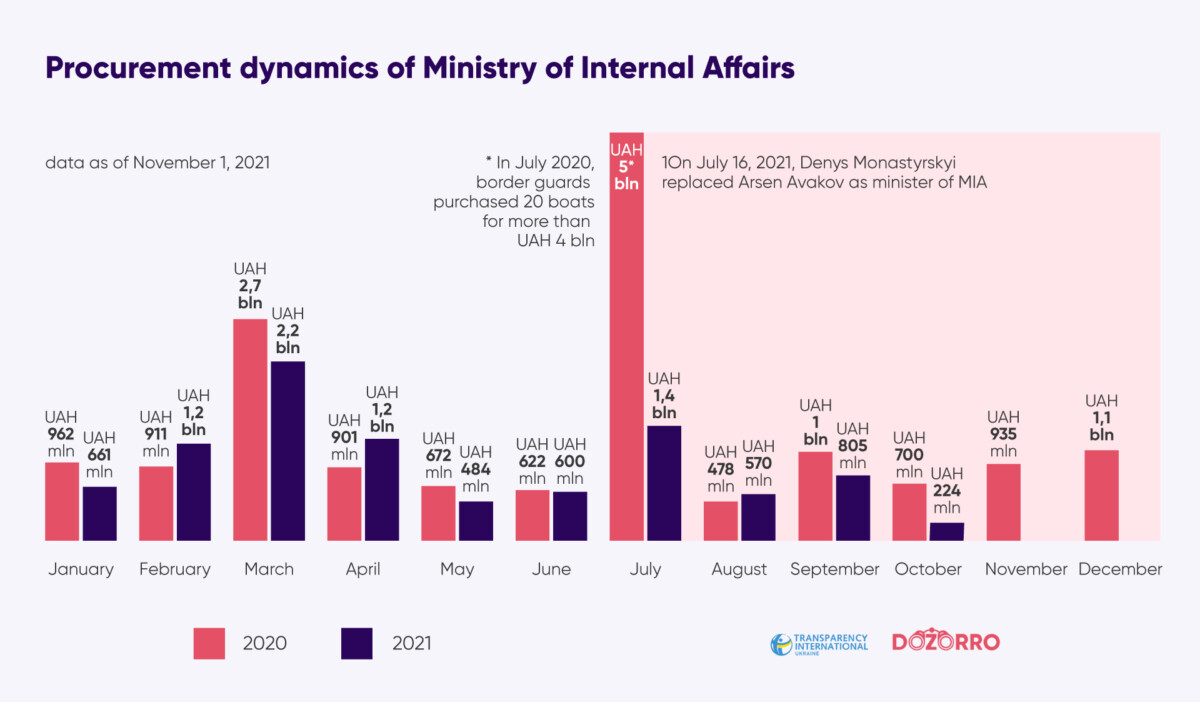 Most of it was spent on the procurement of fuel, cars, construction works and maintenance, as well as clothing and shoes. 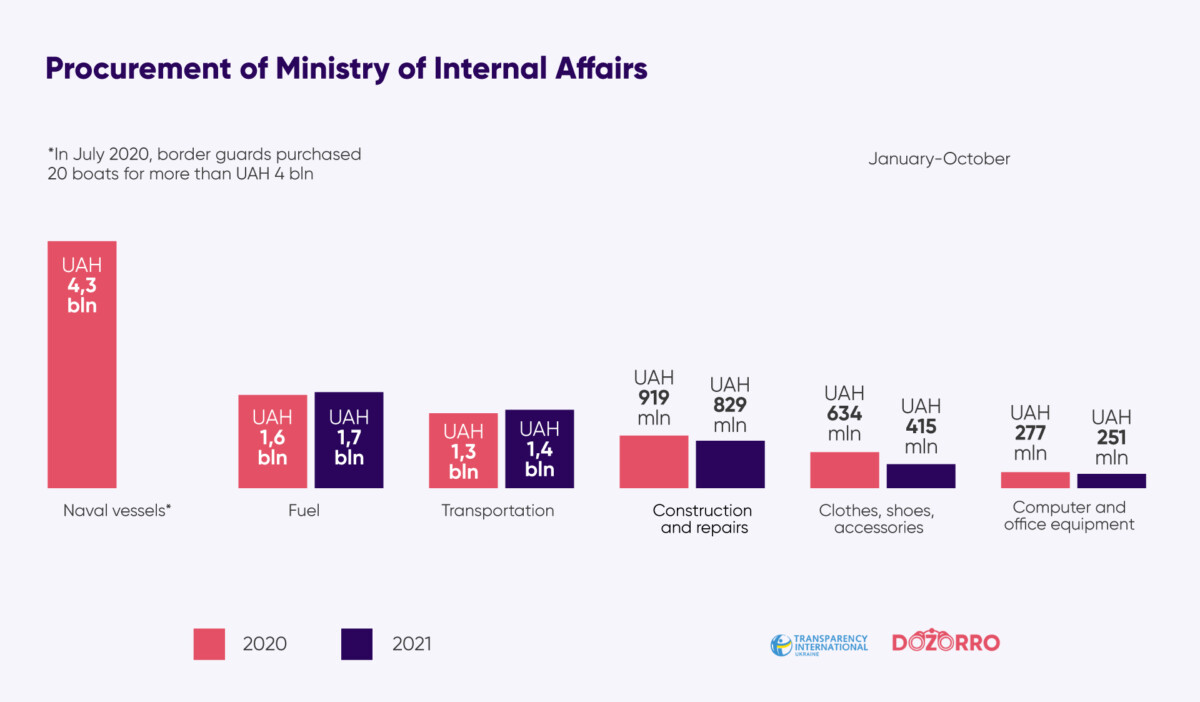 It is worth noting that in 2020, the Administration of the State Border Guard Service of Ukraine purchased 20 special purpose marine security and border protection boats of the OCEA FPB 98 MKI type. They cost more than EUR 136 mln or more than UAH 4 bln. No such procurement transactions were conducted in 2021.

Procurement of divisions and units

However, recently, there have been active discussions about the need for the National Guard and Border Guard Service to separate and be reassigned from the Ministry of Internal Affairs. Ukraine’s international partners also insist on the need for such a division. Volodymyr Zelenskyy tried to reassign the National Guard to himself — a corresponding draft law appeared in the Verkhovna Rada. However, its approval was slowed down in the law enforcement committee of the Rada, headed by Denys Monastyrskyi. Today, the new minister also opposes the separation and reassignment of structural divisions of the Ministry of Internal Affairs. In his opinion, the seven-year experience of cooperation between all units of the ministry has proved its effectiveness, so the structure of the Ministry of Internal Affairs should remain integral. 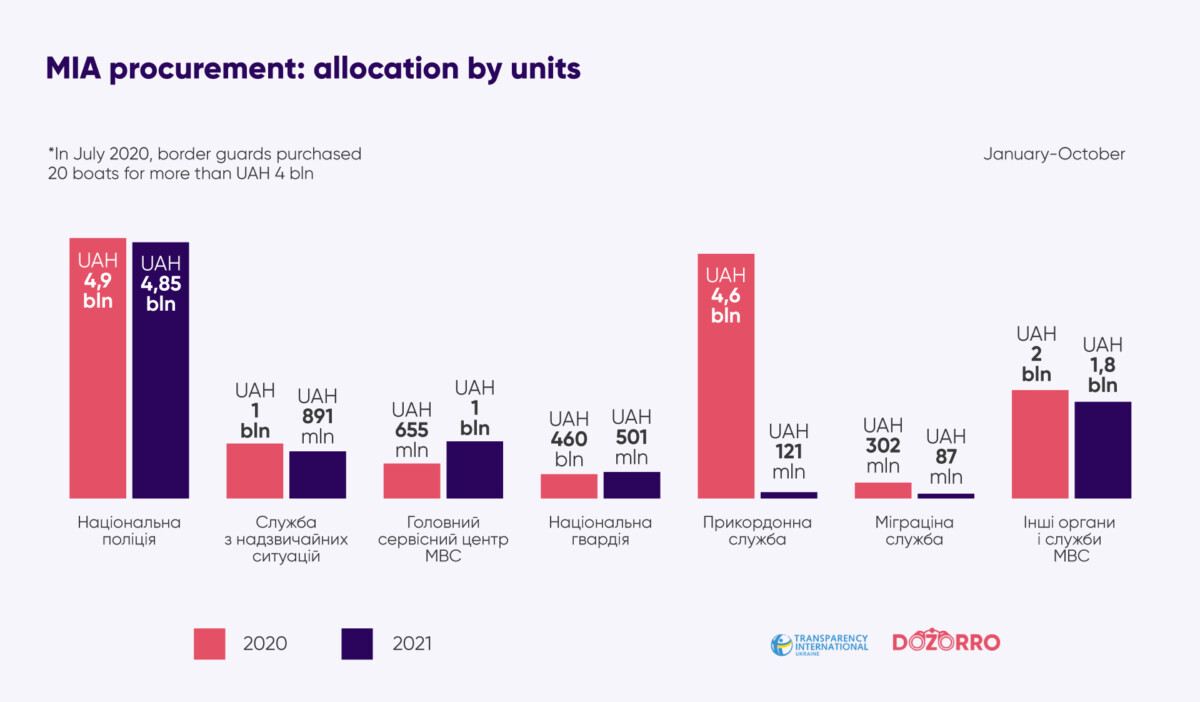 According to our calculations, the National Police of Ukraine spends the most through Prozorro. Last year, its expenses accounted for 35% of all expenses of the Ministry of Internal Affairs from January to October — UAH 4.93 bln. This year, they make up more than half — UAH 4.85 bln. The State Emergency Service of Ukraine ranks second in terms of expenditures — UAH 1.04 bln in 2020 and UAH 0.89 bln in 2021.

Cameras instead of shockers

When Denys Monastyrskyi headed the ministry, the National Police of Ukraine canceled the tender for the purchase of Taser shooting stun guns and cartridges for them for UAH 170 mln. Earlier in April, the Verkhovna Rada refused to grant the police the right to use stun guns during detentions. Previous Interior Minister Arsen Avakov said that the use of electric shock devices of contact and contact-remote action is “a humane police means of coercion that allows to stop the offense and stop the attacker, causing them less harm compared to firearms or traumatic weapons.”

Monastyrskyi said that instead of stun guns, more than 6,000 body cameras would be purchased for the police. The next year, it is planned to provide 100% body cameras for patrol officers.

The new management plans to buy more economical electric cars for the patrol police. According to estimates of the MIA, the cost of a police Mitsubishi Outlander and its servicing on 400,000 km costs UAH 2.059 mln, and the servicing of the Hyundai Kona electric car, although it is 80% more expensive, is only UAH 1.540 mln.

It is worth noting that after the resignation of Arsen Avakov, the Ministry of Internal Affairs changed the supplier of crossovers. The National Police used to purchase Renault Duster crossovers mainly from TOV Spets-Kom Servis. In 2020-2021, this company received more than half of the orders of the National Police for the supply of specialized vehicles. For example, back in May, it won the tender for the supply of Renault Duster crossovers for UAH 168 mln. The price of one car is UAH 555,000.

We will continue to monitor the procurement of the Ministry of Internal Affairs and the changes that the new minister will cause.