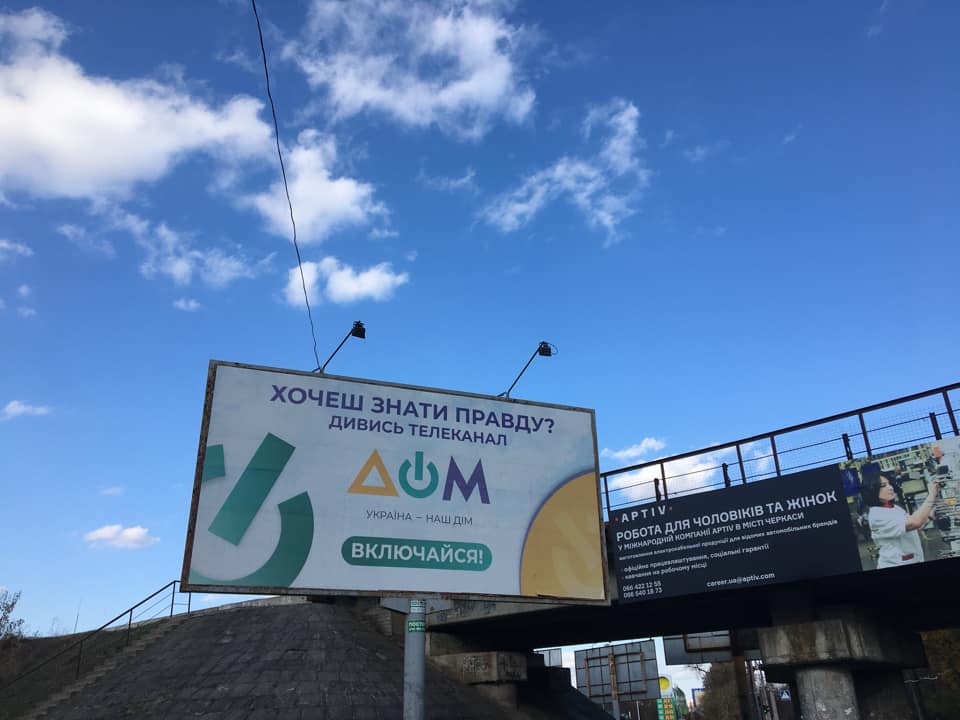 DOM Channel Ads all over Ukraine: Cost and Reasons

The mission of the Dom channel was initially to inform and reintegrate people from the occupied parts of Donetsk, Luhansk, and the Russian-occupied Crimea into Ukrainian society. However, the concept has clearly changed.

In August 2021, an advertisement for the Dom TV channel appeared in many cities of Ukraine. “Do you want to know the truth? Watch Dom TV channel” — this is written on city lights and billboards located in Kyiv, Lviv, Zhytomyr, Uzhhorod, and other cities far from Donetsk, Luhansk, and Crimea. This advertisement raised natural questions because the mission of the Dom channel was initially to inform and reintegrate people from the occupied parts of Donetsk, Luhansk, and the Russian-occupied Crimea into Ukrainian society. However, the concept has clearly changed. For example, in August 2021, President Volodymyr Zelenskyy insisted that the channel broadcast all over the country, so that the displaced people could also watch it. Officially, there are about one and a half million of them in Ukraine. After this statement, the Dom channel purchased advertising for more than UAH 30 mln.

Earlier, in July 2021, the Verkhovna Rada allowed some state-owned enterprises that participated in the preparation for the celebration of the thirtieth anniversary of Ukraine’s independence to change the procurement rules. Among them is the state enterprise “Multimedia Platform of Foreign Broadcasting of Ukraine,” which broadcasts under the Dom logo. Detector Media together with Yaroslav Pylypenko, public procurement specialist of Dozorro, found out how and why the channel organized such a large-scale advertising campaign.

“Multimedia Platform of Foreign Broadcasting of Ukraine” conducts procurement for the needs of its two channels — the Dom channel and the UATV foreign broadcasting channel. During 2021, this company spent more than UAH 31 mln on advertising services in Prozorro. For comparison, advertising of Suspilne this year has cost the budget UAH 320,000.

At least UAH 30 mln (30,288,750) of these expenses was allocated to the promotion of the Dom TV channel: outdoor advertising on city lights and screens, banners and video on the internet and messages on the radio and in stores of different chains. There are other procurement transactions, but they are pre-threshold — for small amounts (up to UAH 50,000), and the company is not obliged to publish the contract, so, it is difficult to find out what exactly is advertised.

For example, it can be an advertisement for a specific channel program in a beauty magazine or SMM services on promoting pages in social networks of the UATV channel; or advertising of specific material on internet platforms: SE “International broadcasting multimedia platform of Ukraine,” for example, purchases services on placing information materials in the Ukrinform news agency. Now the agency’s pages promote an interview with President Zelenskyy.

Outdoor advertising of the channel was ordered for UAH 19 mln for the period of three months in all regional centers. At the same time, the promotion in the Donetsk, Luhansk, and Kherson oblasts — neighboring the temporarily occupied territories — cost the budget less than UAH 300,000. Placement on billboards was purchased for May and September through competitive bidding. Contracts were awarded to Ze Media and Ruby Consulting.

One company — TOV Light Communication — received contracts for UAH 19 mln. This company received especially many contracts under the negotiation procedure for the celebration of Independence Day 2021. Among the 16 contracts worth UAH 35 mln that the company has signed this year in Prozorro, 7 agreements worth almost UAH 32 mln have been concluded in this way.

Outdoor advertising of the Dom TV channel is the largest public contract of TOV Light Communication this year. The second most expensive is the production of a documentary series about the celebration of the thirtieth anniversary of Ukraine’s independence for UAH 9.8 mln. The company must produce 26 game videos of 60 seconds each, a game video of 90 seconds, as well as a documentary of 26 minutes until the end of the year, according to the contract. We contacted the procuring entity — SE “Center for the Protection of the Information Space of Ukraine” with the question of what these videos would be like, when, and where they will be broadcast. However, the company replied that they did not possess such information.

According to the data of Nashi Hroshi, the founders of Light Communication are Vitalii Shapovalenko and director Yevhenii Vysokovskyi. The latter owns the capital’s TOV RA Media OON alone and TOV Victoriia Yacht Travel together with Elina Vysokovska and Larysa Sankova.

Procurement for the promotion of the Dom channel was made without competition: not through auctions, but through a negotiation procedure. Usually, if the expected procurement price is more than UAH 200,000, it should be conducted as auctions in Prozorro. However, this summer the Verkhovna Rada allowed some state institutions and enterprises to buy what was necessary to celebrate the thirtieth anniversary of Ukraine’s independence through negotiation procedures. The Cabinet of Ministers approved the list of such procuring entities and activities for which tenders did not need to be held. They included SE “Multimedia Platform of Foreign Broadcasting of Ukraine.”

For such procurement, procuring entities must justify why they conduct precisely a negotiation procedure, and not a tender. In all its procurement transactions to promote the Dom TV channel, the “Multimedia Platform of Foreign Broadcasting of Ukraine” connects this campaign with the founding summit of the Crimean Platform, although, there is no mention of the Crimean Platform on advertising posters. There is no mention of the displaced persons or occupied territories on them either: “Do you want to know the truth? Watch Dom TV channel” — a call that can be addressed to any audience.

Why was Dom advertised all over Ukraine?

Detector Media asked the management of the Dom channel about the advertising campaign. The official response of the channel’s general director Yuliia Ostrovska to the request reads as follows: “Given the current realities of life, many people live in the controlled territory of Ukraine, who were forced to leave their place of residence as a result of armed conflict, temporary occupation, widespread manifestations of violence, and human rights violations. Such people have the status of internally displaced persons in accordance with the law. These citizens of Ukraine have become detached from their homes and territories, from relatives, friends, families because of the armed aggression of Russia. According to the information from the website of the Ministry of Social Policy of Ukraine, as of July 6, 2021, in the unified information database on internally displaced persons, 1,473,650 displaced persons from the temporarily occupied territories of Donetsk and Luhansk regions and the Autonomous Republic of Crimea living in the controlled territory are registered. The above indicates that the Dom TV channel does not segment content according to the territorial principle, and therefore the target audience of the Dom TV channel is widely branched throughout Ukraine. According to the above information, there are people throughout Ukraine for whom it is important to be in a single information field, know about what is happening in the temporarily occupied territories of Ukraine, and receive prompt, objective, and complete information.” So, it can be stated that the Dom TV channel has actually become an all-Ukrainian Russian-language state TV channel. You can watch it in the free territories of Ukraine via satellite and on the internet. The reorientation to the audience all over Ukraine has taken place recently, judging by the fact that back in February the channel’s chief editor Oleksii Matsuka did not mention reaching this audience among the channel’s tasks in an interview with Detector Media.

As for the advertising campaign and its connection to the celebration of the thirtieth anniversary of the Ukraine’s independence, the channel’s management believes that the national policy of the reintegration of the occupied territories needs to be more clearly articulated. It was during the summit that the Dom channel took on such a mission: “This project was particularly important in the context of the founding summit of the Crimean Platform on August 23, 2021. It was during this period that Ukrainian society more than ever needed to understand the national strategy in the field of reintegration. The founding summit became a powerful informational occasion for the whole Ukraine, focusing on the problems of the temporarily occupied territory of the Autonomous Republic of Crimea and the city of Sevastopol. In fact, the activity of the Dom TV channel complements the national information campaign aimed at supporting the topic of temporarily occupied territories and, within its capabilities, fulfills a common goal together with the Ministry of Reintegration of Temporarily Occupied Territories of Ukraine.”

The article was co-authored with Detector Media journalist Halia Skliarevska