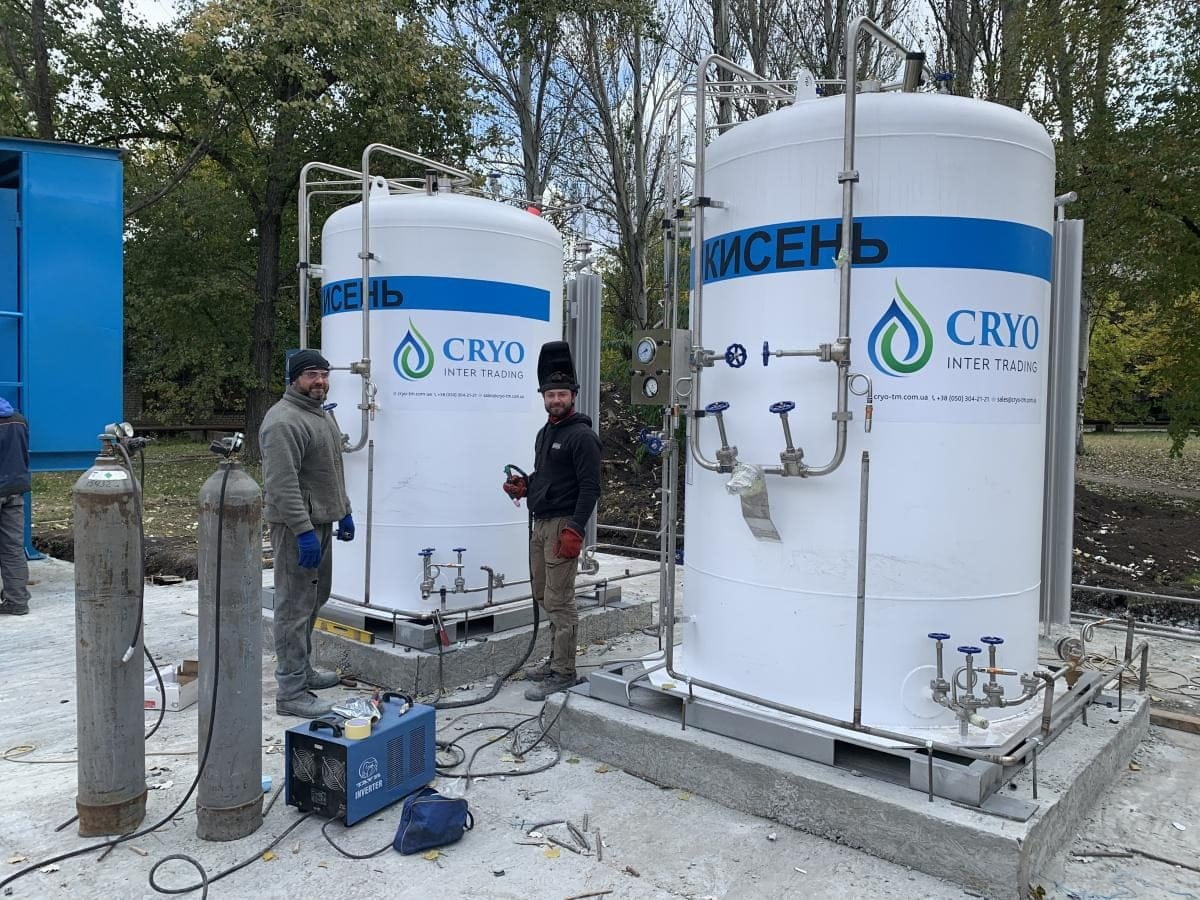 Flow of Oxygen: How Kyiv Covid Hospitals are Equipped with Oxygen Supply Systems

Over the past year and a half, 16 medical institutions in Kyiv operating as Covid hub hospitals, have installed oxygen stations and oxygen distribution systems in the wards.

Almost two years after the start of the COVID-19 epidemic in the world, we still do not know exactly at what point in the process we are. Therefore, government institutions, as well as doctors, are only responding to the new challenges of the pandemic. The second half of 2021 is marked by the fight against a new strain of coronavirus — Delta. The course of the disease is more rapid. It also more often seriously affects the respiratory system.

According to the data of the Ukrainian Ministry of Health, in this epidemic season, one COVID-19 patient consumes 5-6 times more oxygen than it was in the spring. In particular, in just two weeks from October 11 to November 7, the daily amount of liquid oxygen consumed increased from 279 to 378 tons per day. It almost equaled the volume of total oxygen production by specialized enterprises — about 400 tons per day.

That is why doctors are acutely aware of the need to supply high-flow oxygen, which is obtained either from liquid oxygen or oxygen stations. Unfortunately, most hospitals in the country do not have enough of them.

Responding to the increasing need for oxygen, the Verkhovna Rada allocated UAH 800 mln for equipping hub hospitals with oxygen stations in November. UAH 650 mln will be spent on the centralized procurement of oxygen stations for basic healthcare institutions and another UAH 150 mln — on their development and installation. At the same time, experts often say that such a step is somewhat delayed; the Verkhovna Rada spoke about the need to equip all covid hospitals with oxygen stations back in July, when there was no such acute situation with incidence. If some regions were precisely waiting for a subvention from the national budget to equip their hospitals with stations, then they would be able to use the funds and build these stations only in a few months. That is, clearly, not in the current, difficult for everyone, wave.

We have analyzed how the capital prepared the main hospitals for an unhindered supply of oxygen to the wards, how much it cost the budget, and what are the actual deadlines for such work.

Back in the summer of this year, the specialized deputy of the Kyiv mayor Hanna Starostenko inspected the main medical institutions of the capital, preparing for a new wave of the epidemic. Back then she said that the oxygen supply of beds is 97%.

“Some hospitals are still undergoing repairs, but most of them are already provided with centralized oxygen,” told the official.

According to the data provided to us by the Department of Health of the Kyiv City State Administration, in 2021, UAH 54.2 mln was allocated from the national budget to provide centralized oxygen supply to the bed fund of hospitals in Kyiv. As of November 11, UAH 7.7 mln of it was financed. In addition, UAH 11.6 mln was allocated from the development budget of Kyiv for major repairs of oxygen networks. Out of this amount, UAH 4.47 mln has already been spent.

That is, in total, UAH 65.8 mln was allocated for oxygen wiring and stations, of which only UAH 12.1 mln has actually been spent so far. And this is all for 25 hospitals of municipal ownership, which are now the hub ones in Kyiv.

This is not a large amount because one project for the arrangement of an oxygen station and wiring from it costs from UAH 1-2 mln to 10 mln, depending on the complexity of the object. However, the analysis of procurement of all hub hospitals in Kyiv, which we have conducted, shows that medical institutions responded quickly to the new challenges of the pandemic and began to actively implement such projects in the autumn of 2020.

Out of the 25 hospitals that are now hub hospitals, 20 institutions purchased work in 2020-2021 on the arrangement of an oxygen station or cryocylinders, design and estimate documentation for them, as well as installed or repaired networks of external and internal pipelines from the stations. It is worth noting that not all hospitals carried out such work because some of them received the status of coronavirus only this year.

The total expected cost of equipping and repairing oxygen stations in hub hospitals in Kyiv for 2020-2021 is UAH 135 mln. This is together with procurement transactions announced in October-November 2021, contracts for which have not yet been concluded. Many of these contracts were paid for by hospitals out of their money. After the second stage of the medical reform, medical institutions have become independent economic entities and receive funds for the treatment of patients under the program of medical guarantees from the National Health Service.

The health department could not explain to us how the way to finance the corresponding procurement of oxygen equipment for specific institutions was chosen. Therefore, we can only state the fact: the amount of procurement transactions of this profile in Kyiv outstrips the amount of subventions actually paid from the national and local budgets.

The analysis of procurement also shows that there is a clear correlation between the number of beds allocated in the institution for covid patients and the amount of costs for arranging stationary oxygen and its wiring. Some of the busiest support hospitals are already doing the second round of work on major repairs of oxygen supply systems this year — increasing the number of points or installing additional stations. At the same time, seven hospitals have announced the corresponding procurement only in September-November of this year, that is, already during the third wave. However, out of these, only two institutions — hospital No. 8 and Chornobyl hospital — are ordering such works for the first time.

What was done in specific hospitals

The main hospital of this specialization in the capital, which is constantly increasing the number of beds for covid patients, has twice purchased works on the oxygen station and pipeline from it. At the end of 2020, major repairs worth UAH 10.19 mln (covid procedure) were conducted there to increase the performance of the main oxygen source in the existing oxygen station. As part of this procurement, oxygen pipelines were streamlined, additional evaporators were installed at the oxygen station, and underground and aboveground pipelines were laid from it. In total, the work covered eight buildings of the hospital. Already in September of this year, waiting for the outbreak of the third wave of the pandemic, the hospital announced the procurement of major repairs of the oxygen supply system with an increase in oxygen consumption points. The works worth UAH 5.75 mln should be completed by the end of 2021, they cover six buildings of the hospital.

There have already been several procurement transactions of oxygen equipment here, too. The Kyiv City Clinical Hospital No. 1 purchased major repairs of the oxygen supply system with the installation of a gasifier in December 2020 for UAH 6.04 mln under the coronavirus procedure. The contractor had to install the main and backup gasifiers and pipelines from the station on the territory of the hospital by the end of the same year. In May 2021, the hospital decided to purchase major repairs of the oxygen supply system with the installation of a gasifier again. The expected cost of the procurement amounted to UAH 263 mln. The actual payment of work to the contractor was UAH 5.8 mln. According to the contract, the hospital installed a new oxygen station, as well as external and internal networks for two buildings. In August, the hospital announced another procurement of works on repair of the gas supply system and gasifier. The contract was awarded to the same contractor who received the previous contracts, and the works are still ongoing. The estimate includes installation works of the pipeline and landscaping, but the order volume was reduced from UAH 8.16 mln to UAH 6.5 mln. At the same time, the hospital is now preparing to sign a new agreement with the same company —  for UAH 2 mln.

Major repairs of the hospital’s oxygen network with the procurement of a stationary vacuum tank for storing liquid oxygen in the Kyiv City Clinical Hospital No. 3 were conducted just before the pandemic, in 2019. The contract was signed for UAH 7.3 mln, but then it was decided to reduce the volume of procurement, so only UAH 4.77 mln was paid. Already at the end of 2020, there was a need for reinforcement — a new tender was announced for major repairs (installation, extension) of the oxygen supply system in the main building (in-patient treatment) of the hospital in the amount of UAH 6.04 mln. For this money, an oxygen station was installed and the gas supply network was extended.

The Kyiv City Clinical Hospital No. 4 conducted major repairs of the oxygen supply system of the building at the end of 2020 for UAH 7.7 mln; an oxygen station and external and internal pipelines were installed.

In 2021, the hospital purchased more major repairs of the oxygen supply system of premises for UAH 1.47 mln — wiring for 80 oxygen outlets.

This year, the hospital has twice purchased major repairs of oxygen supply systems. In the end, UAH 1.2 mln and UAH 3 mln was paid according to the contracts. Now, there is another procurement ongoing, but for a much smaller amount — UAH 160,000.

In the coming days, a contract is to be concluded for major repairs of the oxygen supply system of the Kyiv City Clinical Hospital No. 8. The amount is UAH 22 mln. The project envisages providing medical oxygen to 503 connection points of Unit A and B of the hospital No. 8 with the arrangement of a gasification station site for two cryogenic tanks as the main source of oxygen supply.

The dispensary was repairing the oxygen supply system on 3 floors from January to the end of April this year. Two contracts were signed for this purpose: for UAH 3.65 mln and for UAH 1.8 mln.

Major repairs and modernization of the oxygen system were conducted in December 2020. To do this, the hospital signed a contract for UAH 5.87 mln.

This is information about the largest procurement transactions. Full list is available at the link.