Focus on accountability: how Ukrainian cities fight for openness

The first Transparency Ranking of the 100 biggest cities highlighted the very points of challenge that cities should work on first. For now, the transparency score grew by almost 60%.

Almost 70% of Ukraine’s population lives in cities. More than 18 million live in the 100 biggest cities. Over one-third of citizens personally have contact with local government agencies annually, and an even bigger percentage engages with them in a written or online form. From communicating about receiving subsidies to getting the licenses to starting their own business.

Since 2014, the process of decentralization has been taking place in Ukraine. The authority and financial powers were delegated from state agencies to local government agencies. Cities gained a great boost for urban development — only in 2018, the revenues of the biggest cities reached UAH 235 billion.

Transparency is no longer such a dark path for Ukrainian cities

Four years ago, when the Transparent Cities program was just launched, the average level of transparency was four times lower than now. The first Transparency Ranking of the 100 biggest cities highlighted the very points of challenge that cities should work on first. For now, the transparency score grew by almost 60%.

What is behind the improvement? For instance, in 2020, 93 cities out of 100 provided an opportunity for parents to apply for enrollment of a child in kindergarten and/or school online. Most of them also use resources with an open waiting line for distributing children to preschool institutions.

According to Transparency Ranking 2020, Mariupol became the leader, scoring 86.6 points. The nearest is Lviv — 85.2 points. Both city councils developed a system of electronic registration of housing applications, ensured the publication and completeness of data on municipal housing, published announcements of all meetings of the public commission on housing and the minutes of their results.

The improvement is also observed in the areas of social services and land use and construction policy, in particular, due to the introduction of new electronic tools for submission and tracking of applications for services in social institutions as well as receiving passports for temporary structures.

Transparency has opened up new opportunities for cities’ development.

According to Mariupol mayor Vadym Boichenko, the first one is to improve services for people. In particular, the largest administrative center in Ukraine opened in Mariupol. The second one is the dialogue between the state authorities, city councils, and the public. The third one is engaging investors. Over five years, the city attracted almost EUR 200 mln of investments — the money was aimed at modernizing water supply, outdoor lighting, and modernization of municipal transport. “It’s a lot of work to bring international investors to the city. But thanks to high transparency rates, the International Finance Corporation works with only one city in Ukraine — and this is Mariupol,” the city mayor stressed.

Drohobych (78.1 points), Vinnytsia (76.7 points), and Ternopil (75.2 points) are also included in the top 5 of the Transparency Ranking. Volodymyr-Volynskyi, a small city located in Volyn Oblast, rose by 27 positions and entered the top 10.

What do these results mean in practice?

The development of Ukrainian cities is a real achievement of decentralization, and it should not be underestimated. In particular, the level of city transparency does not depend on size or region. The main factor in implementing the changes is the proactive position of local governments and active citizens.

Is transparency enough for the comprehensive city’s development?

Many indicators in the Transparency Ranking concern adopting regulatory acts. However, formal transparency is not always supported by practice. For example, the local government states that citizens have unhindered access to the commission meetings. Still, there are obstacles in accessing those meetings. To determine how open to public control local councils are, we created the Accountability Ranking of 50 Ukrainian cities.

The results of the first accountability assessment show a severe gap between the practical openness of the local self-government bodies’ activity (admission to meetings of bodies, establishing a dialogue with society, reporting) and more formal requirements (disclosure of data, ensuring the operation of the website), of which the transparency assessment mainly consists.

The average accountability score is four times lower than that for transparency (12.5 points vs. 54.4).

Mariupol and Lviv have become leaders, but their score is already 32 and 22 points, respectively, and that is out of 100. This is not even close to half the points. 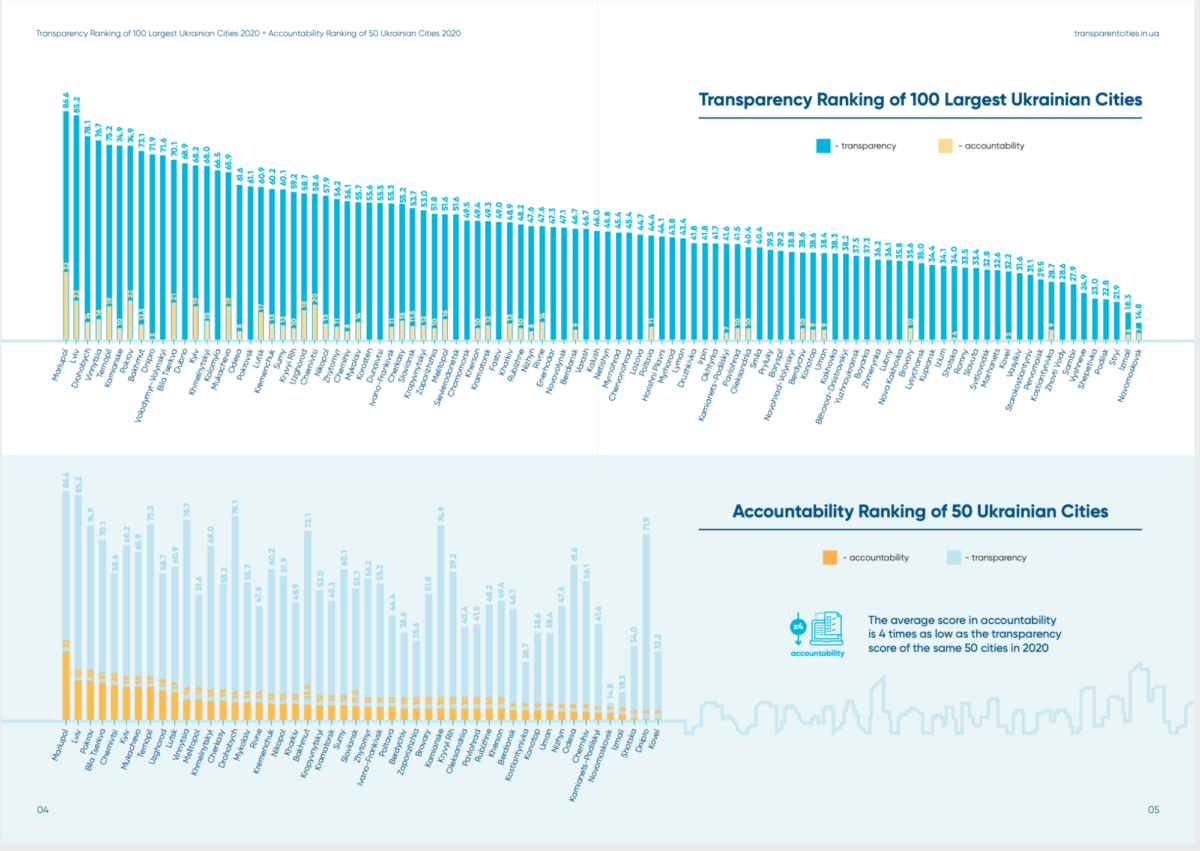 Social demand for openness and accountability

Accountability means a real opportunity for citizens to be involved and influence policy-making processes, control, and inspect the performance of local governments, while the latter are obliged to report publicly on their activity.

Given that communities have the most reliable information about what is happening in their cities, it would not make sense to assess accountability without them. The challenge for our team was how to involve the public in developing their cities, and how to make the dialogue with the government as constructive as possible.

A simple tool was needed to record practical cases where accountability is questionable or, conversely, where considerable progress is observed. Therefore, we created a Transparent Cities online platform.

Thanks to the online platform, registered users can leave detailed feedback on the realization of indicators and add supporting materials (documents, photos, audio, video, links); civil society organization (CSO) representatives can verify and publish feedback in their personal accounts; local authorities’ representatives can respond to feedback and communicate with residents.

So far, 30 city councils have registered their accounts. 40 CSOs expressed a desire to join the community. Such interest implies that cities require openness not on paper, but in real life.

For our part, we continue to provide consulting support, expert recommendations and highlight the very points of challenge that a city should work on first.

So that Ukrainian cities become accountable, transparent, and prosperous.

Cities require openness not on paper, but in real life