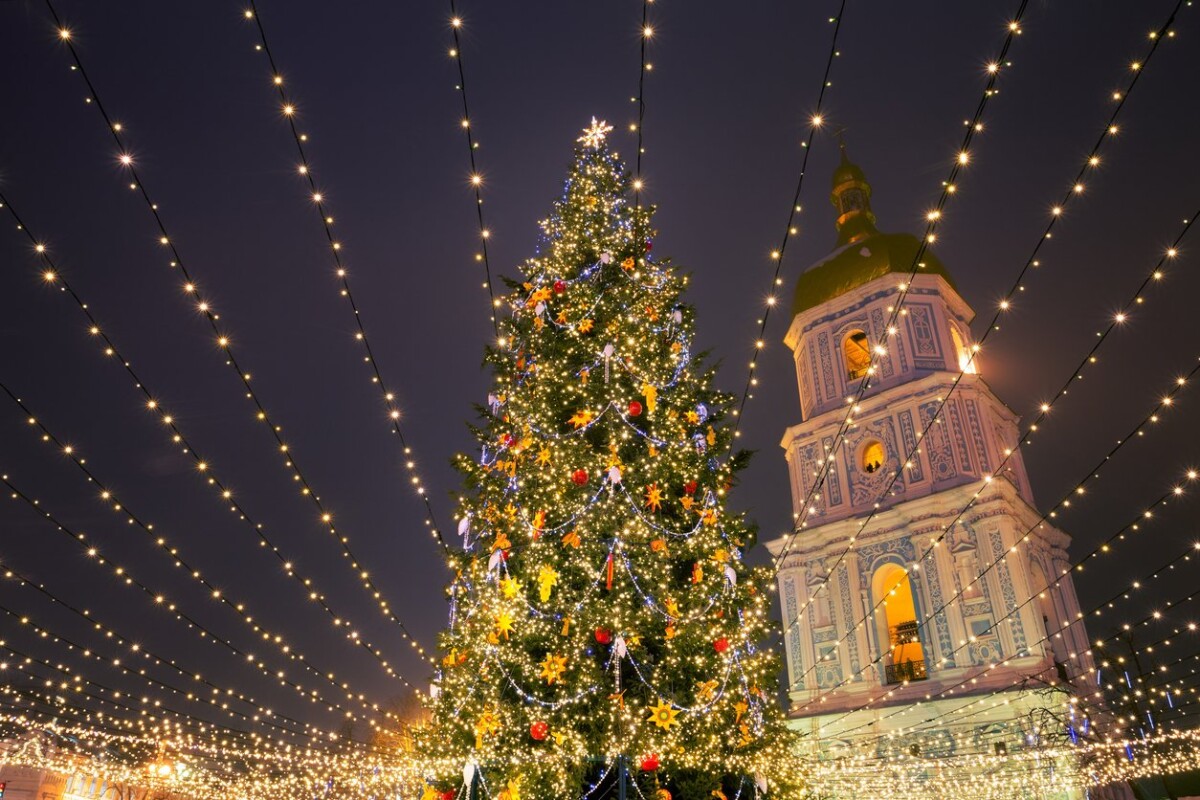 Millions for LEDs: How Much Ukrainian Cities Spent on Main Christmas Trees

The cost of preparations of regional centers of Ukraine for the New Year ranges from zero to more than UAH 70 mln. We have analyzed procurement transactions, conducted in relation to holidays, in different cities of the country and will tell you about the approaches to local budget expenditures.

The cost of preparations of regional centers of Ukraine for the New Year ranges from zero to more than UAH 70 mln. We have analyzed procurement transactions, conducted in relation to holidays, in different cities of the country and will tell you about the approaches to local budget expenditures.

The main Christmas tree of the capital is traditionally considered the main Christmas Tree of the country. This year, like all previous ones after the Revolution of Dignity, it was put up on Sofiiska square. It isn’t the tallest in Ukraine, but definitely beautiful and impressive: the 31-meter tree is decorated with 20,000 gold and red balls, in a magic tent made of diode strings of lights and individual bulbs. The current main Christmas tree did not cause any disputes, but only delight.

However, the procedure for processing expenses for the capital’s Christmas tree continues to raise questions. As we already explained in detail last year, the KCSA traditionally gives the right to arrange the main Christmas tree to companies associated with the former senior official of the KCSA Ihor Dobrutskyi. Previously, this was done simply because these companies own registered trademarks with certain new year’s art titles. The city purchased art projects with these specific titles. And since the titles are registered trademarks, you can only purchase them from the owner.

Perhaps, the city authorities this year finally considered a certain ethical inconsistency of such a procedure. After all, the company that will be given budget money, and the right to use the holiday location for commercial purposes was determined at a special concept competition by the Arts Council. However, the winner of the competition was TOV Global Decor, which took charge of the capital’s Christmas tree last year.

This company was given UAH 2.2 mln according to the negotiation procedure. According to the TD, these funds were used to arrange festive illumination of the Christmas tree, the square, and several art objects. The Christmas tree itself (this year and in recent years it’s an artificial tree) and decorations (plastic balls, tinsel) on it are provided by the winner of the competition.

For a location of this scale, the amount of 2 mln is really not too large — the rest of the costs are covered by sponsors. Almost the same amount was spent by the Department of Culture on arranging a Christmas tree and holding a festive concert at another location in the city center — in Shevchenko Park. The contract worth almost UAH 2.5 mln was given to the Kyiv branch of the creative union “Association of pop artists of Ukraine” also according to the negotiation procedure. The KCSA spent more than half a million hryvnias on organizing a festive town in Podil. Here, too, the contractor was selected at a competition, and only the report on the negotiation procedure was published. The estimate for this agreement shows that “the cultural and artistic work ‘Christmas in Podil’” is the installation, decoration, and cleaning of festive locations of the square.

In general, Kyiv spent more than UAH 5 mln. In addition, districts of the capital also organize their own Christmas trees and holidays.

The Dnipro city council decided to approach the organization of the holiday this year with neither negotiations, nor excessive modesty. It decided to impress not only Dnipro residents, but also the whole Ukraine — the cost of festive decoration of the Christmas tree and the central square of the city reached a record UAH 50 mln.

ME Misksvitlo announced a procurement transaction with an expected cost of UAH 51.6 mln, two participants took part, and TOV Ukrtekhnoprom won the auction with a minimal advantage. For UAH 50.8 mln, the contractor created themed zones, decorated the Christmas tree, and illuminated the square and streets with diode illumination.

In addition, in Dnipro, garlands and various decor were also purchased separately to decorate the city center. In general, the city’s expenses for the celebration exceeded UAH 70 mln.

Zaporizhzhia ranks second in terms of New Year’s spending this year. The local department of culture and tourism conducted only three procurement transactions, but spent UAH 10.5 mln within them. The services for organizing a holiday location, installation of garlands and other electrical equipment, and separately for designing and connecting illumination were purchased.

Kharkiv, which also likes to spend crazy money on festive locations for the New Year holidays, this year was quite restrained: it spent less than UAH 9 mln. A 40-meter Christmas tree was installed on the main square, which was purchased back in 2018. For its decoration, illumination, and design of two festive squares, almost from the city budget was spent UAH 4.4 million. The tender was won by TOV Sharing Express, which took part in public procurement for the second time.

Another UAH 4.5 mln was spent on the festive illumination of the Horkyi Central Park.

Odesa spent traditional amounts — ME Odesmisksvitlo purchased services for festive illumination of the main square and the center for UAH 2.6 mln and UAH 1.4 mln. Both procurement transactions were won by the local company TOV Lumiere Ukraine. As part of simplified procurement, it also received a contract for installing a Christmas tree for UAH 199,000.

In general, the city spent approximately UAH 7 mln on the main Christmas tree and illumination.

In Lviv, a real Christmas tree was traditionally lit. The 18-meter tree was presented to the city community by Vasyl Kozlenko, resident of the Obroshyno village, whose spruce tree had been growing in the yard for 35 years. To install it and purchase garlands for it, the city paid more than UAH 180,000 to ME Lvivsvitlo.

Lvivsvitlo spent another UAH 4.6 mln on the illumination of the central streets of the city. Residents of Vinnytsia were left without the main Christmas tree at all last year — a festive location and events were canceled due to quarantine restrictions. Apparently, this is why this year, the city authorities organized the holiday to the fullest: they installed a 28-meter Christmas tree consisting of real trees. UAH 1.9 mln was spent on it, another UAH 1.35 mln was spent on garlands and lighting. The city also has already made sure that after the holidays, the Christmas tree was removed.

In Zhytomyr, the city authorities showed an example of a rather economical approach to organizing the celebration, which, however, not everyone liked. The main Christmas tree of the city is 30 meters high, as the Kyiv one on Sofiiska square, but here, it is a real tree growing in the center on the Mykhailivska street.

The department of culture of the city council purchased services for organizing festive events, which also included decorating the Christmas tree, the square and creating photo zones, as well as organizing broadcasts and video messages. This tender with an offer of UAH 414,000 was won by the regional puppet theater. The department of culture separately purchased LED structures for photo zones in the center for UAH 974,000. However, not all citizens liked the level of organization of festive locations, according to social networks.

In the administrative center of the frontline Donetsk region, local authorities have arranged the main Christmas tree quite budget-friendly. The city’s department of culture purchased services of a festive light show for the opening of the main Christmas tree in Kramatorsk for UAH 198,000. All new year’s procurement transactions for decorating the city center cost a little more than UAH 400,000.

In Cherkasy, a lot was spent, but some decorations were purchased last year (for example, LED structures with the name of the city) for UAH 2.76 mln. In 2021, another UAH 3.95 mln was spent. In general, approximately UAH 5 mln was spent on the Christmas tree, decorations, and festive events in the city this year.

Almost UAH 3 mln was spent on the main Christmas tree in Rivne. Here, TOV Epicenter K won the procurement with minimal bidding — for UAH 2.99 mln. The more economical offer of his competitor was rejected because that company did not provide all the necessary documents.

The very same TOV Epicenter K became a contractor in Chernivtsi — the city authorities purchased an 18-meter artificial Christmas tree for UAH 799,000. A slightly cheaper offer was provided here by the same company that competed with Epicenter in Rivne, and it was also rejected for non-compliance with the tender requirements.

One of the most economical among regional centers was Poltava. Here, the city authorities ordered installation and decoration services for the central Christmas tree worth UAH 148,000. Another UAH 90,000 was paid for the installation of new year’s illumination. The Christmas tree and illumination had been purchased in previous years. However, at first, the local ME responsible for them offered to finally do everything “like normal people do” — for UAH 3 mln. However, MPs of the city council did not approve such an amount for entertainment.

The Ivano-Frankivsk community has demonstrated a real example of conscious consumption and economy in terms of the city budget. Here, the city authorities arranged both a Christmas tree and a festive illumination, and they were the first in Ukraine to open the location, back on December 3. However, no money was spent on procurement this year in general.

Actually, we can only welcome such a logical and balanced approach of the city authorities. Moreover, judging by the photo, the economy did not affect the quality of decorations of the main Christmas tree of the city.

According to the Chesno data, the city spent more than UAH 400,000 on the festive events — the opening of the Christmas tree and the festival.