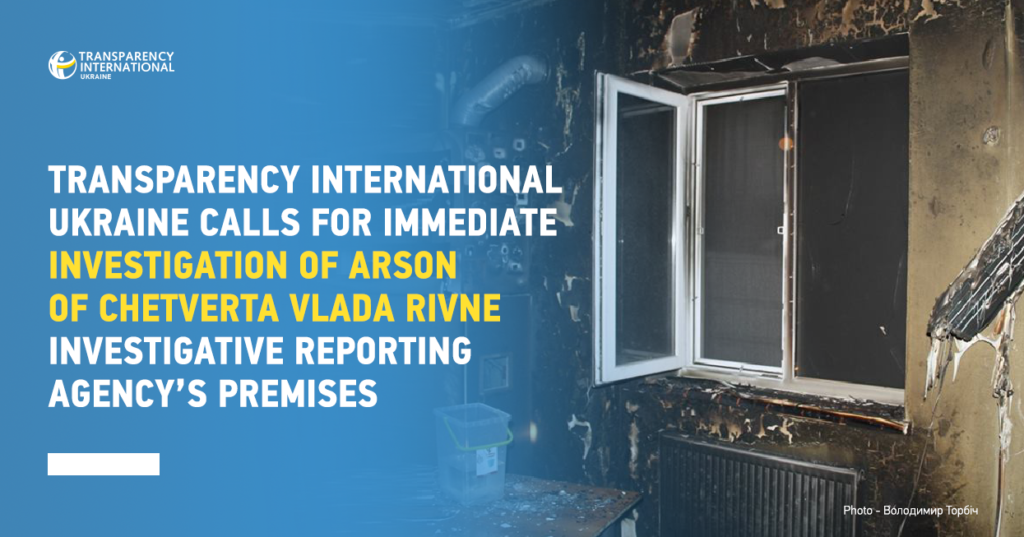 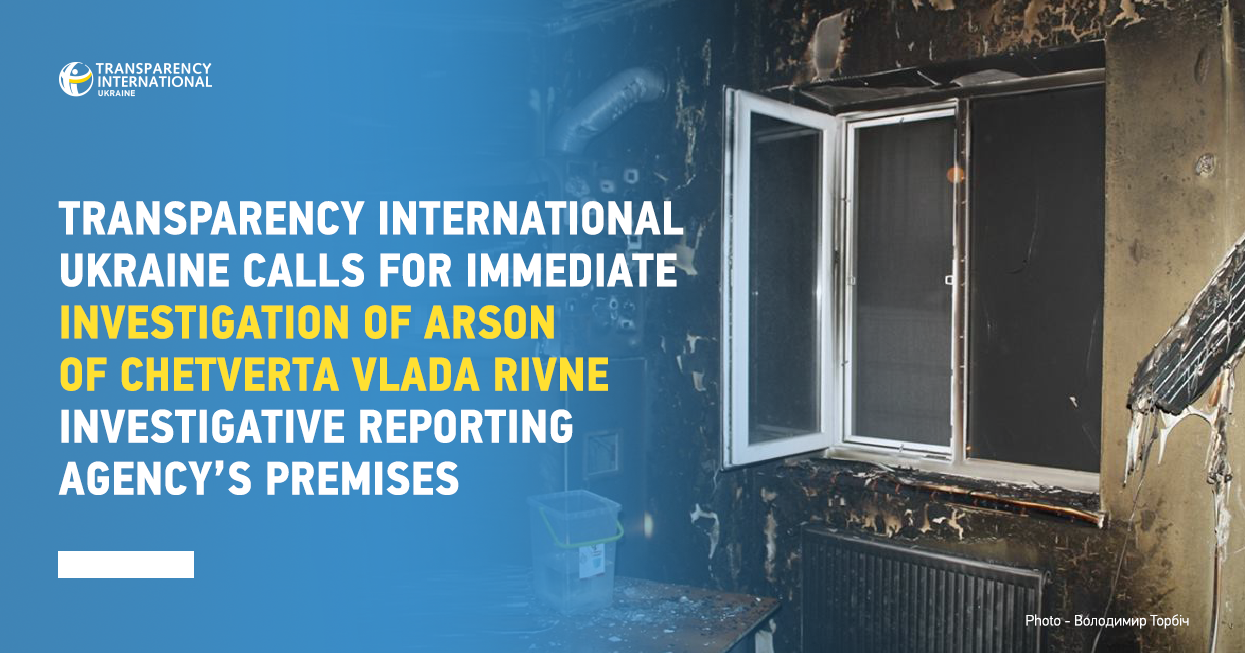 February 22 in the evening, the office of Chetverta Vlada (Fourth Estate) was set on fire in Rivne. Transparency International Ukraine believes this to be connected with the journalists’ unmasking corruption schemes and calls for the law enforcement bodies to start an immediate investigation.

The arson took place between 7 to 7.30 p.m., while the journalists were still working at the office. Antonina Torbich, deputy editor of Chetverta Vlada and member of TI Ukraine, asked her son, who was staying there with his parents, to check whether somebody entered the office, as she heard the door opening. The son ran back to report about a man who didn’t even cover his face entering the office and setting it on fire. Everyone rushed outside, so nobody was injured. They called the police and fire brigade and started putting out the fire. The damages of the arson approximately reached several dozens of hryvnias. On February 22 at around 10 p.m. the website of Rivne police informed about the start of a pre-trial proceeding under the preliminary legal assessment of Article 194, Past 2 of the Criminal Code of Ukraine.

This hasn’t been the first time the civic activists and journalists in Rivne being threatened. For example, the service provider of the websites of Chetverta Vlada (4Vlada), Holosno and Rivne-1 has been robbed; therefore the web pages of these NGOs and a number of other organizations are witnessing technical problems. Ms Torbich suggests these two incidents might be connected. The coalition of Rivne Reforms Council believes this crime to be among a number of similar ones. On the night of February 18 to 19 someone set the door of the Anti-Corruption Monitoring of Ukraine NGO on fire.

Rivne-based Chetverta Vlada has been investigating and disclosing the information on massive corruption schemes, i.e. illegal construction and prosecutors’ involvement in the case of the so-called ‘amber mafia’. Having published the investigation of assets of Rivne-born first deputy head of Security Office of Ukraine (SOU) Pavlo Demchyna, the activists started receiving letters from SOU with the requirement to provide detailed information on the organization’s finances, which can be qualified as a bold pressure, as far as the authorities possess all information about the projects that receive international technical support.

Ukrainian chapter of Transparency International condemns the arson of Chetverta Vlada premises and calls for immediate investigation of this and other related crimes. In autumn 2017 a disgraceful public ostracism of anti-corruption activists gained force. Activists and journalists from Kharkiv, Poltava and Odesa have been attacked for their work. Transparency International consider these attacks that threaten the civil society intolerable, and they still inhibit Ukraine’s upward motion in the Corruption Perceptions Index.