Yaroslav Yurchyshyn: ARMA Must Protect the National Interest by All Possible Legal Means 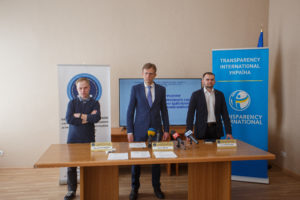 The decision of Kyiv Administrative Court to prohibit ARMA to manage certain property belonging to former Minister of Revenues and Duties Oleksandr Klymenko and his inner circle is illegal and carries signs of crime. This statement was made by Anton Yanchuk, Head of the National Agency for Finding, Tracing and Management of Assets Obtained through Corruption and Other Crimes. TI Ukraine’s Executive Director Yaroslav Yurchyshyn and Head of the Public Council under ARMA Hlib Kanievskyi participated in the briefing as well.

“On March 21 this year, Kyiv Administrative Court as represented by judge Pashchenko granted the request of the litigants (Klymenko’s authorized representatives) and prohibited ARMA to carry out management of the seized property. The same property that has been under its management for half a year now,” said Anton Yanchuk at the briefing. “The decision was made behind the scenes: without involvement of the representatives of the National Agency, investigators, representatives of the Main Military Prosecutor’s Office. We found out about the decision only when we received it by mail.”

Yanchuk said that the judge arrived at the conclusion that it was possible to prohibit the National Agency to manage property due to his belief that, when the property was placed under the Agency’s management, the investigative judge did not establish the value of the property. However, at the moment of the decision-making, ARMA already had seven rulings of judges which established that the value of the property in question exceeded 200 minimum wages, which is required by the Law on the National Agency. Thus, the issue of value has already been resolved by the court and does not need further corroboration. Namely, the property in question includes high-end apartments in Kyiv and Odesa, 20 parking spots, non-residential premises in Gulliver shopping mall and a number of luxury vehicles which belong to the former minister and his inner circle.

On April 2, the Administrative Court denied ARMA’s motion to cancel the prohibition to manage assets which had already been put under ARMA’s management.

Transparency International Ukraine supports ARMA as long as the National Agency’s activity is legally justified and stays within the scope of the law.

“We have a remnant of the past, when, by depriving public agencies of certain functional capabilities, conditions were created to lower the price of the assets. Even if the assets are returned under ARMA’s management, we as taxpayers will be burdened with the price loss. That is, the government will make up for the difference from its own funds,” said TI Ukraine’s Executive Director Yaroslav Yurchyshyn at the briefing. “ARMA has to protect the national interest by all available legal and lawful means that are at the Agency’s disposal.”