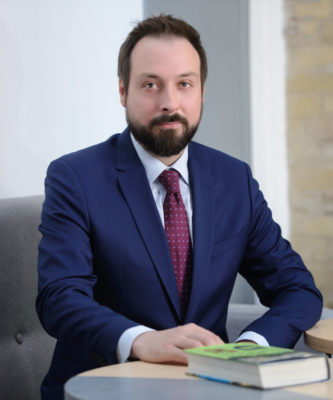 Andrii Vyshnevskyi is a lawyer, an expert in the field of reforming public service and justice institutions. He has 15 years of experience working in top positions of the central bodies of Ukrainian executive authorities. Since 2017, he has been a national consultant of the European Council, the OSCE, and the UN, as well as social activist and one of the co-initiators of the Tomorrow’s Lawyer program. Andrii is currently studying in Oxford.

At the celebration of the 5th anniversary of TI Ukraine Andrii delivered an unforgettable presentation about the role of values in the fight against corruption,

🤝 “When most people think of corruption, they think political corruption, and the first way to beat it means to punish. Almost 60% are in favor of lifting MPs’ immunity, sacking officials, and banning them from holding public positions. And only approximately 20% look at the more profound level to see that the main ways to fight corruption are to prevent it, regulate performance of governing bodies, create efficient systems of inner control, and raise legal literacy.”