A HISTORIC EXPERIMENT WITH JUDGES: THE QUEST FOR JUSTICE

One of the most expected reforms following the Revolution of Dignity was the judicial reform. Righting the wrongs and punishing corrupt officials – those mottoes prevailed in the public debates of high-ranking officials, who had just been in the opposition.

Meanwhile, practice shows that the judiciary was not at all willing to clear its ranks, and the same old judges were appointed to new courts.

That is precisely why, for the first time in the Ukrainian history, selection of judges to the newly created anti-corruption court engaged international experts, who would assess the candidates independently and ensure an objective selection procedure.

As American politician Robert F. Kennedy used to say, “Each time a man stands up for an ideal, or acts to improve the lot of others, or strikes out against injustice, he sends forth a tiny ripple of hope, and crossing each other from a million different centers of energy and daring those ripples build a current which can sweep down the mightiest walls of oppression and resistance.”

Formation of the Public Council of International Experts (PCIE) was stipulated by the Law of Ukraine “On the High Anti-Corruption Court.” International organizations working with Ukraine in the sector of corruption prevention and counteraction nominated 12 foreign lawyers. Out of them, 6 people were selected, who eventually participated in the selection of Ukrainian judges.

We cannot speak about credibility of the court when high-ranking corrupt officials avoid responsibility, drunk drivers get away with a suspended sentence, and some Supreme Court judges simply cannot explain the origin of their wealth.

The HQCJ, which mostly consists of former judges, proved unable to clean the Augean stables and expel all the unworthy candidates from the Supreme Court competition.

That is how such candidates as Viacheslav Nastavnyi and Serhii Slynko (who made politically motivated decisions in Lutsenko’s case) or Bohdan Lviv (who meddled with the automatic records system and whose lifestyle is inconsistent with his declared income) because Supreme Court judges.

That is why the decision was made to engage international experts who have experience with procedural management, support of public prosecution of judicial work abroad, who have no connections or restrictions in the Ukrainian legal community. Most importantly, they are independent experts, who could assess the integrity and professionalism of potential judges for real.

The mandate of international experts includes assessment of candidates in terms of their consistency with integrity criteria, as well as their knowledge and practical skills.

Experts developed the assessment criteria and published an entire list of guidelines. The PCIE clearly defined its primary task as a careful study of the candidates so that only worthy lawyers would proceed in the competition.

The decision on consistency with the criteria was made through a simple majority vote at a special joint meeting with the HQCJ.

It is important to understand that the candidate dropped out of the competition if he or she was not supported by at least three international experts.

Eventually, out of the 113 candidates who had passed the written test and the practical assignment, the international experts decided to review 49 people.

The experts proved their uncompromising integrity and readiness to fight for justice since the very first meeting. Then, 8 out of 8 candidates left the competition despite making every effort to justify the violations and unethical behavior.

“Maidan judge” Oksana Holub will not become an Anti-Corruption Court judge. The same goes about former judges of High Administrative Court Ihor Shtulman and Anatolii Zahorodnii, who participated in decision-making on prohibition of peaceful assembly and covered up for “Maidan judges,” or lawyer Dmytro Yahunov, who failed to explain the discrepancy between his income and expenses.

At all 6 meetings, the candidates could provide evidence of their stance, refute the claims of international experts or explain certain decisions. Some of them managed to do it.

Only 7 out of the 49 candidates proceeded after being reviewed by the PCIE. They are judges Inna Bilous, Petro Feskov, Olha Salandiak, Valeriia Chorna, Volodymyr Voronko, attorney Markiian Halabala and professor Serhii Bodnar. 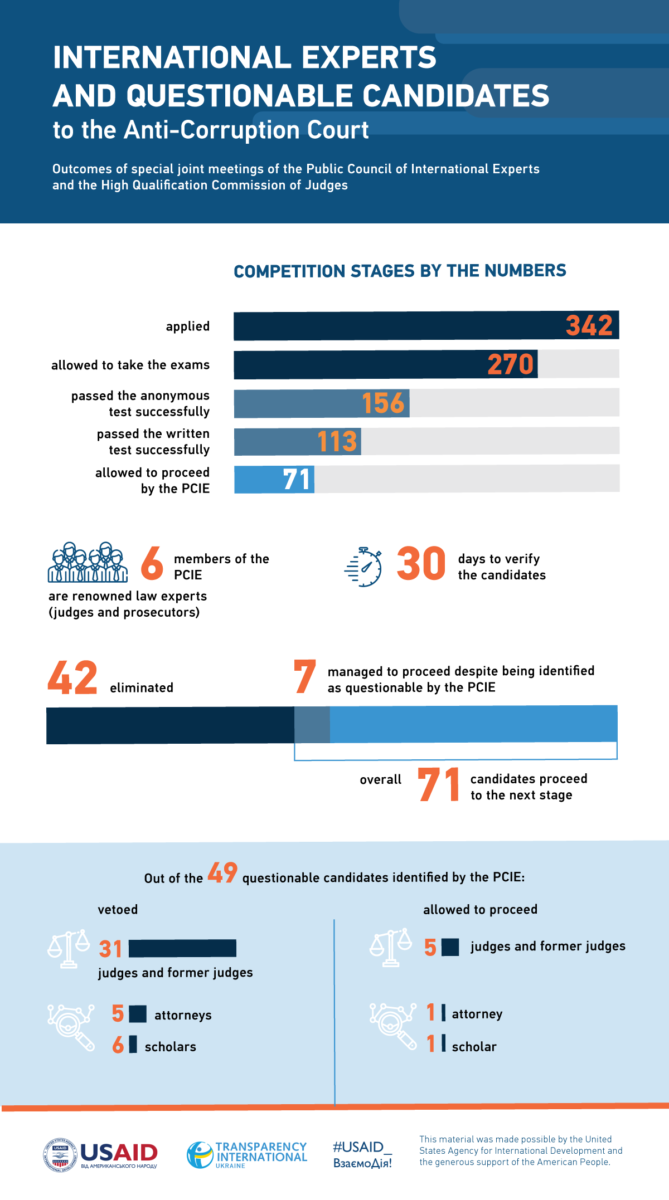 The international experts managed to formulate the threshold of candidate compliance. It can be reasonable doubt about the candidate’s integrity, knowledge or practical skills.

Such “reasonable grounds” may be based not only on verified violation of integrity rules, but also if there is inconsistency with the assessment criteria that affect the credibility of the judicial system and the HACC.

As opposed to the criminal justice procedure, there is no benefit of the doubt when it comes to candidate assessment. If reasonable doubt has been established, and the lawyer himself/herself or other sources did not refute the claim, it may be enough to eliminate the candidate from the competition. That is the biggest achievement of the HACC selection process.

This standard of proof should be used in the judicial reform in general. How can we talk about new judiciary if a judge with minimum income has numerous cars and houses, makes questionable decisions and violates the fundamentals of the court procedure?

Discussions of PCIE head Sir Anthony Hooper with questionable candidates are must-see footage for all Law students and anyone whose job is connected with the law, because they set a standard of fighting for justice despite any and all obstacles.

The experiment with engagement of international experts has proven itself effective. A remarkable proof is the 42 unworthy candidates who will not become High Anti-Corruption Court judges.

Now we should all think how to change the formation principle of the judiciary overall. Engagement of international experts and the public as members of the High Qualification Commission of Judges may become a useful tool to restore credibility of courts. Eventually, this may finally establish the rule of law principle in Ukraine.

Currently, the mandate of the international experts in the High Anti-Corruption Court competition is over, and the final list of potential anti-corruption judges will be formed by Ukrainian judicial agencies.

On 30 January, the High Qualification Commission of Judges started interviewing the candidates who have passed the stage of international experts. This will be followed by formation of the final list of recommended candidates by the HQCJ and its review by the High Council of Justice, which will submit the list to the President for subsequent appointment.

We would like to believe that they will stop the candidates who remain in the competition despite the questionable issues with their integrity or professional ethics.

It is important to understand that the future judges of the Anti-Corruption Court will become the face of the new judicial agency, and its reputation will be fully based on their actions.

I believe that the selection of judges for the High Anti-Corruption Court is truly historic in many aspects. It should serve as an example for radical change of formation strategies of judicial authorities and for restoration of its credibility.

It is not at all important what kinds of decisions the court will make if the society does not trust its judgment, and judges keep looking at the telephones in their offices.

Justice, after all, is not for individual lucky people, not just for you, for me, for him or for her. It is for all of us together, and we should seek it together, too.