Chaos and Prospects of Judicial Governance

In Ukraine, if you don’t have something terrible to say about courts, you say nothing at all. The recent decisions made by Baryshivskyi court, Kyiv Administrative Court and others only serve to confirm this idea. Institutions that are directly responsible for the Ukrainian judiciary, though, only make things worse and may soon become blocked.

So what is happening with the High Qualification Commission of Judges (HQCJ) and the High Council of Justice (HCJ), and where is this entire thing going?

There are two institutions in Ukraine designed to resolve any and all issues connected with Ukrainian courts: the High Qualification Commission of Judges and the High Council of Justice. 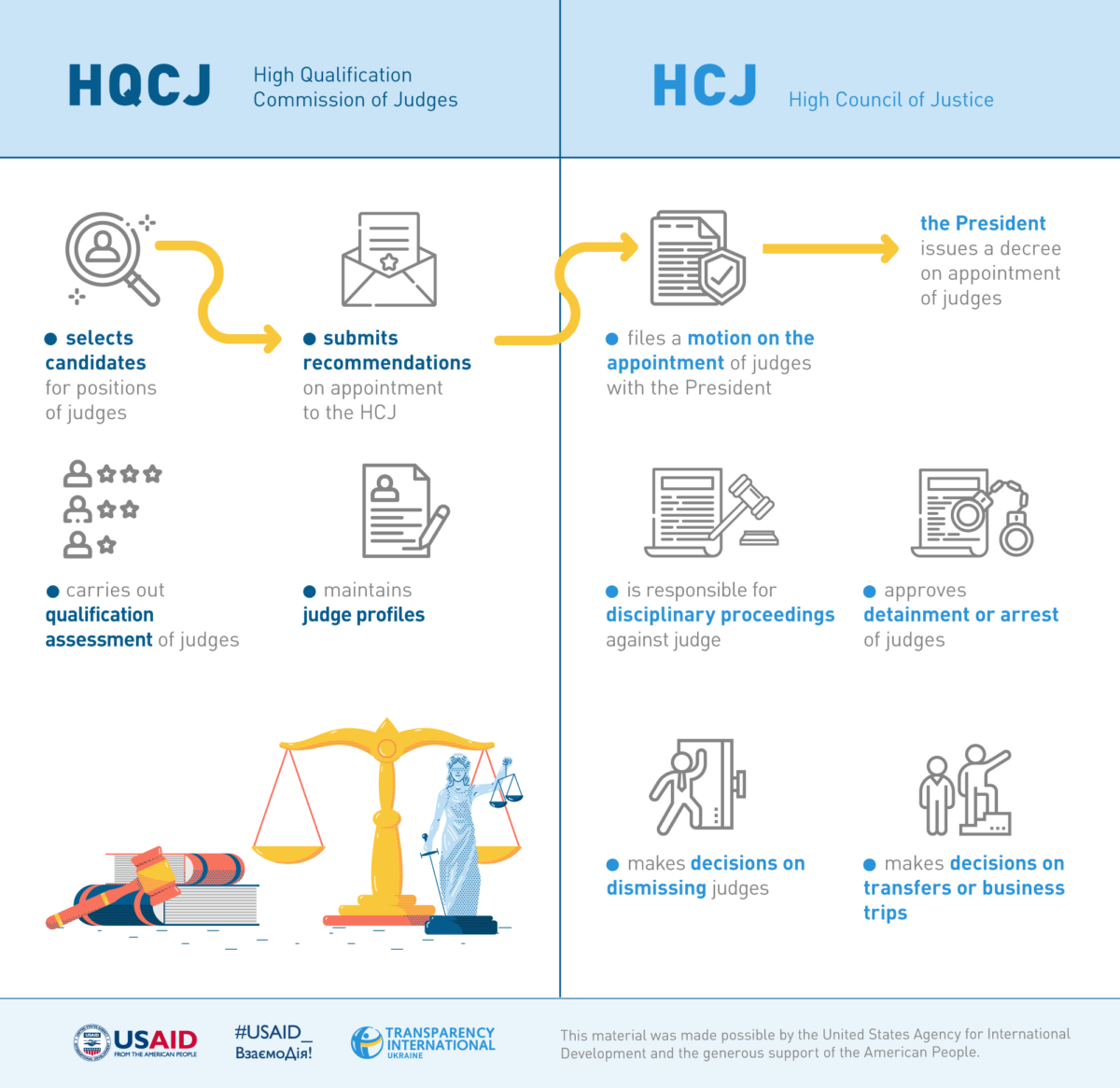 The 2016 reform ensured total “independence” of the judicial branch of power in Ukraine. MPs voted for amendments to the Constitution and passed the new law on judiciary. Among other things, they took away the authority to appoint judges or permits for their detainment from themselves. The President received the symbolic right to sign appointments of new judges.

Thus, the full authority in the judicial system was granted to judges themselves, or to be more exact, to judicial governance authorities: the HQCJ and the HCJ. 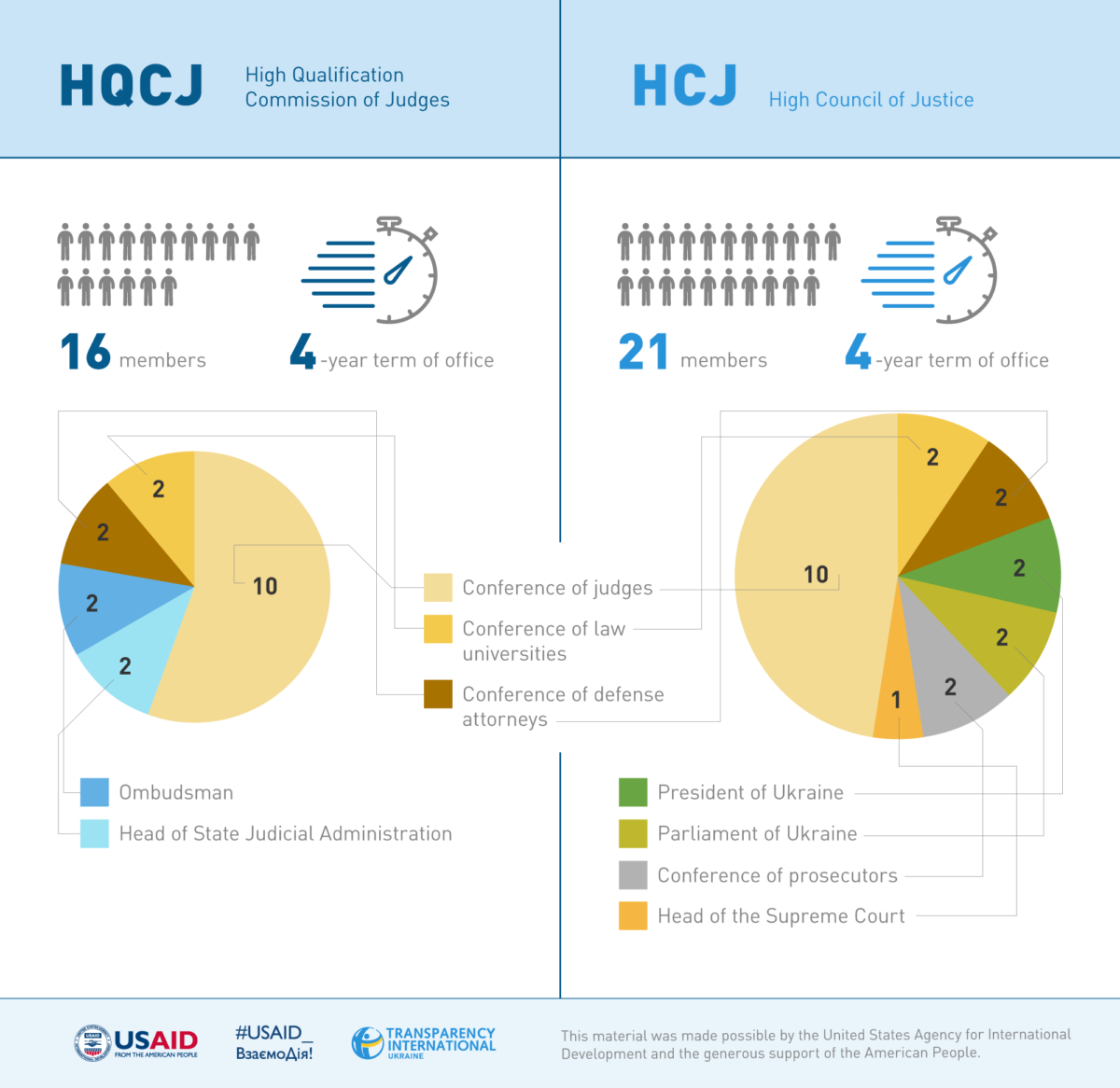 It would seem that with key players balancing one another, the system of checks and balances would be in place. In practice, it turned out completely different. The judicial reform ended up in the hands of the same judges who had been blocking the update of the judiciary for years. The majority  in the judicial governance agencies went to the same representatives of the old system.

This is why the judicial reform failed. Out of 2043 judges who had gone through the qualification assessment as of the end of 2018, only 179 were deemed unfit for judicial work. That is less than 9%. For instance, among those who successfully passed the qualification assessment was head of Kharkiv Appeal Administrative Court Hennadii Bershov. The judge permitted numerous cases of failure to declare assets and claimed that his mother, who does not even have a driver’s license, uses his Toyota Land Cruiser. 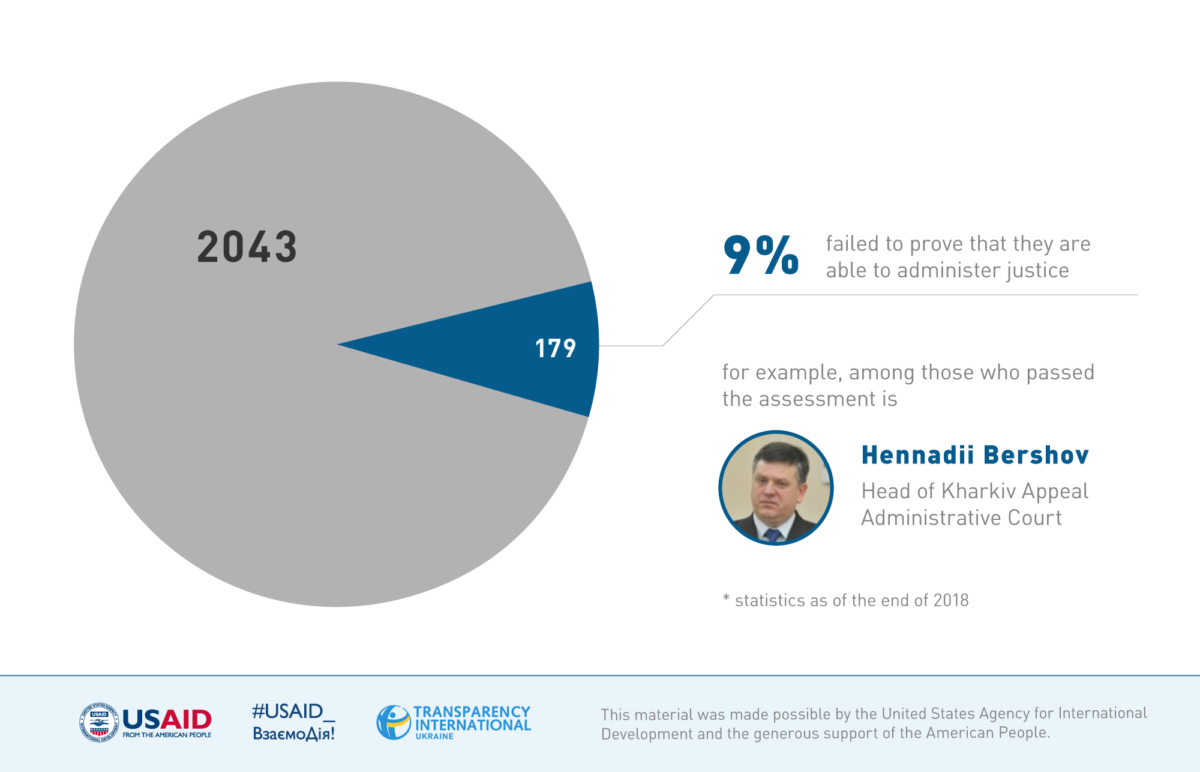 The 2016 reform ensured total “independence” of the judicial branch of power in Ukraine. MPs voted for amendments to the Constitution and passed the new law on judiciary. Thus, the full authority in the judicial system was granted to judges themselves, or to be more exact, to judicial governance authorities: the HQCJ and the HCJ.

The High Qualification Commission of Judges was created in 2010 after passage of the Law of Ukraine “On Judiciary and the Status of Judges.” The law clearly defined the term of office of the HQCJ as six years.

The Law on fair trial reduced the term of office of HQCJ members from 6 to 4 years. At the same time, under this law, members elected by the conference of judges would stay in office for four more years from the moment this law came into effect, that is, until 29 March 2019. HQCJ members appointed by the Minister of Justice, the Ombudsman or the Head of the State Judicial Administration would stay in office for four years from the moment of appointment, that is until 2018.

The law on judiciary in its 2016 version interfered with the issue again and determined that all “old” HQCJ members would stay in office until the end of the term of office for which they were elected. So the question comes up about the interpretation of this term: from 4 years under the Law on fair trial to 6 years under the 2010 Law on judiciary, which would mean a term of office until 2020. 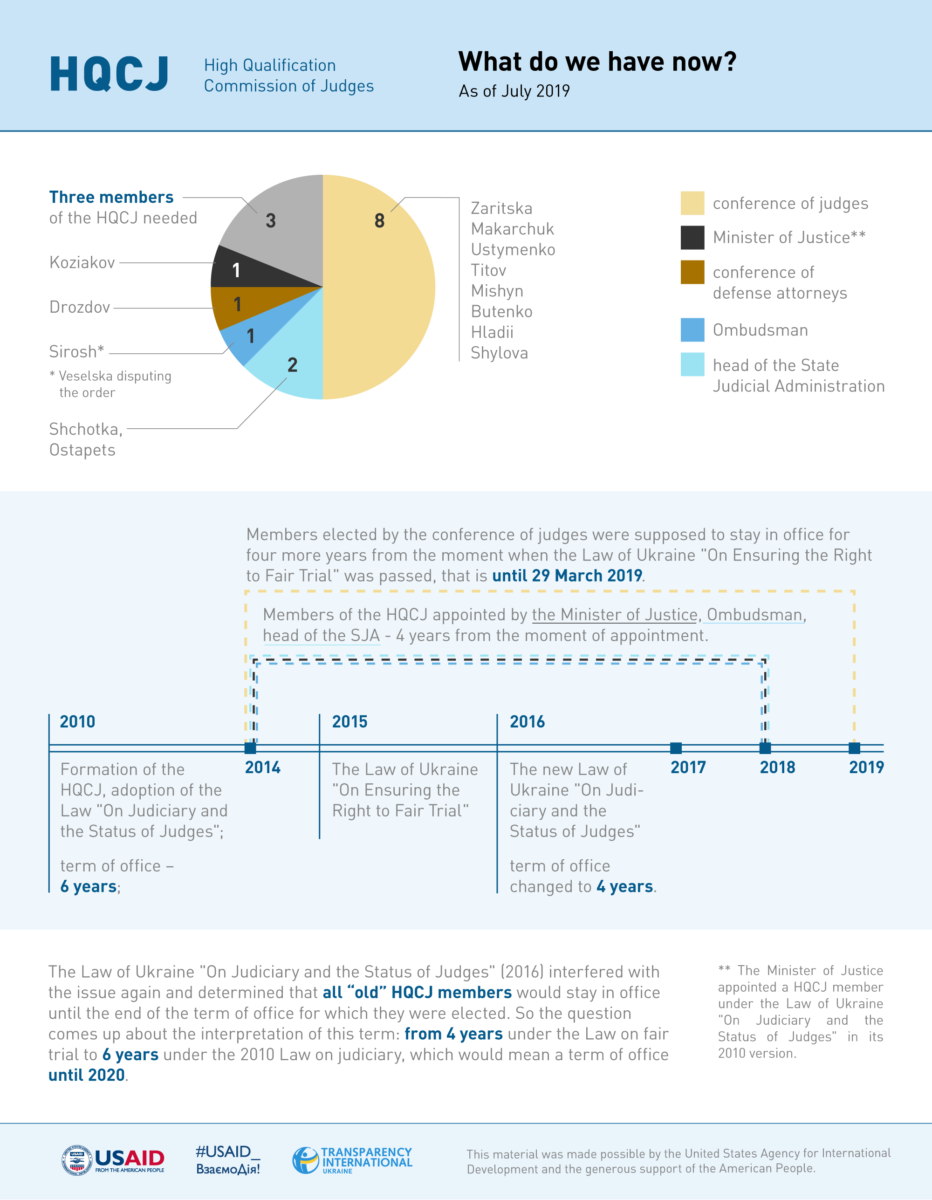 The under-reformed judicial system created vagueness that is used by everyone: advocates of the new judicial reform, candidates for positions in the judiciary and various intermediaries.

So what have we got? Out of 16 HQCJ members, the most controversial ones are the eight appointed in 2014.

They participated in decision-making on qualification assessment of judges, competitions and approving recommendations on appointment of Supreme Court and High Anti-Corruption Court judges.

Since 2018, the powers of all of them are being disputed in administrative courts. One of the litigants Ihor Shtulman failed to pass the competition to the Anti-Corruption court, another one – former Deputy Minister of Justice Volodymyr Bohatyr – is trying to get in on the quota of the State Judicial Administration and the Ombudsman.

On 6 May 2019, the notorious Kyiv Administrative Court decided that the authority of Deputy Head of HQCJ Stanislav Shchotka should have ended back on 5 December 2018. On 15 May, the same court prohibited Serhii Koziakov to execute his powers as part of preliminary injunction in connection with the end of his term of office. There is also the decision of the Supreme Court on another case where the court also established that “old” HQCJ members (the ones appointed in 2014) were appointed for a 6-year term of office.

Moreover, on 25 May 2019, the State Investigation Bureau registered a criminal proceeding concerning HQCJ members appointed in 2014. According to the proceeding, these people are suspected of usurpation of authority.

The under-reformed judicial system created vagueness that is used by everyone: advocates of the new judicial reform, candidates for positions in the judiciary and various intermediaries.

Court decisions that contradict one another and involvement of law enforcement agencies not only provoke chaos, but also can discredit the entire procedure of formation of the judicial corps, for instance, recognize the results of competitions for the Supreme Court and the High Anti-Corruption Court invalid.

You are about to become even more confused.

On 13 May, former HQCJ member Andrii Vasylenko was appointed a member of the HCJ.

On 14 June, Taras Lukash, appointed on the quota of the Head of State Judicial Administration, resigned.

On 27 June, Ombudsman Liudmyla Denisova fired Andrii Kozlov, appointed on her quota in 2016. The alleged reason was that he did not have sufficient experience. It is noteworthy that Kozlov publicly spoke about violations and mistakes in the HQCJ in the weeks before getting fired. Currently, he is disputing the order on his dismissal in court.

On 30 June, the term of office of Serhii Prylypko, appointed on the quota of law universities, ended.

Same thing with the term of office of Pavlo Lutsiuk, appointed on the quota of defense attorneys.

The crisis is further aggravated by the story of former Deputy Head of HQCJ Stanislav Shchotka. On 3 July of this year, Serhii Ostapets, appointed by the order of the Head of the State Judicial Administration, took his position. Meanwhile, Shchotka himself continues to work in the HQCJ – a truly unique situation, which only adds to the growing mountain of issues with the judiciary.

Also, on 13 July, the State Judicial Administration identified the winner of another position in the Commission. This was Andrii Solodkov, who failed to declare a 2013 Mercedes Benz ML350 and a 300-sq.m house.

Still, the HQCJ will have over a third of its members missing. This will prevent it from carrying out the qualification assessment of judges the way it should be. For instance, to overcome the negative conclusions of the Public Integrity Council, they need 11 votes out of 16.

The High Council of Justice was created in 2016 to replace the previous iteration of this agency. The HCJ was supposed to take on the functions of a judicial system “watchdog,” taking some of the functions previously assigned to the Parliament.

Neither HCJ members nor HQCJ members can be elected (appointed) for their positions for two consecutive terms of office. But there is a category of HCJ members who continued their term of office which started in the previous iteration of this agency. Part of the legal community uses this as a reason why they can be elected for a second term at the HCJ. For instance, on 15 February 2019, the conference of defense attorneys delegated Pavlo Hrechkivskyi and Oleksii Malovatskyi to the HCJ. This is being disputed in court.

On 10 June 2019, President Zelenskyy cancelled a previous decree of President Poroshenko on appointment of Andrii Vasylenko and Mykhailo Isakov as HCJ members and announced an open competition for those positions.

Vasylenko is already disputing this decree in court. Isakov resigned, which also means he does not recognize the President’s decree as legal.

Court decisions that contradict one another and involvement of law enforcement agencies not only provoke chaos, but also can discredit the entire procedure of formation of the judicial corps, for instance, recognize the results of competitions for the Supreme Court and the High Anti-Corruption Court invalid.

What can we do about this?

Ukraine can come out of the current chaos with different results. A crisis is not only a chance to decline, it is a chance to grow that we cannot miss.

Just the idea that competitions for the Supreme Court and the High Anti-Corruption Court can be disputed can be a serious blow to the order in the country. It is unacceptable if all the work that has been done should be discredited. So the issue of powers of HQCJ members should be regulated as soon as possible.

Only the court can put a stop to this. But what do we do if the 2016 judicial reform has failed to achieve the designated results? Only 144 judges were recognized as unfit for office, and only 15 were actually fired.

There is a way out. We should update institutions that can carry out a true judicial reform – the HQCJ and the HCJ. As for me, the optimum option is if the President would submit a draft law on changes to the procedure of HQCJ formation and changes to the Constitution concerning reformatting of the HCJ (and potentially uniting these agencies after the transition period is over).

Restoring the HQCJ’s credibility is possible if the composition is different. Half of it should consist of representatives of the public (professional organizations, lawyers, defense attorneys) who could actually make decisions instead of just performing advisory functions. Currently, this is how the Public Integrity Council works.

The Public Council of International Experts should serve as the basic filter for selection of HQCJ members. The PCIE has already proven its effectiveness and objectivity in the HACC competition. Judges should select their representatives by e-voting. This should minimize political influence.

I believe that the crisis can become the foundation of a victory and a qualitative improvement of the judicial branch. After all, an effective judicial system would benefit everyone – the society, the economy and the state.

This material was made possible by the support of the American people through the United States Agency for International Development (USAID). The content of this material is the exclusive responsibility of the Grantee and does not necessarily reflect the views of USAID or the United States Government.

Restoring the HQCJ’s credibility is possible if the composition is different. Half of it should consist of representatives of the public (professional organizations, lawyers, defense attorneys) who could actually make decisions instead of just performing advisory functions.