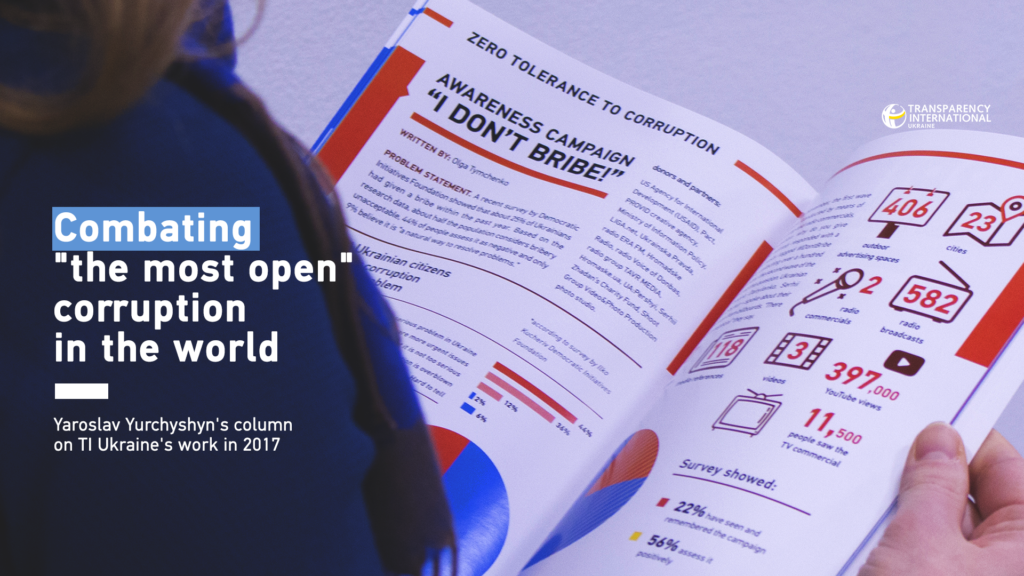 Combating “the Most Open” Corruption in the World

“You managed to build the most open corruption in the world,” joked a participant of an international conference on corruption prevention while analyzing Ukraine’s achievements and challenges on the way to transparency and accountability. Based on the results of year 2017, it is certainly hard to disagree.

On the one hand, our system of electronic declaration for officials has no counterparts across the world in terms of availability of information. At the same time, however, law enforcement agencies cannot use this information properly. It happens due to negligence and actual obstruction by the system administrator – the National Agency for Prevention of Corruption. The public procurement system ProZorro not only saves millions of dollars for the national budget, but is also a Ukrainian national brand. European Bank for Reconstruction and Development now recommends it as the basis for development of procurement systems in other countries. Moldova is already implementing one, entitled mTender. But those who are supposed to control its efficiency are often the ones who try to find a way to cheat. For instance, think about the controversial procurement of hybrid offroaders by the Ministry of Internal Affairs and the reaction of the State Audit Service to the violations we identified. Not many national budget holders use the highly effective system of budget transparency eData – again, with no reaction of supervisory agencies. Decentralization made many funds and powers closer to people – yet, there are not enough mechanisms of control over the activity of local authorities. Even so, the five most transparent cities in Ukraine (according to Transparency Ranking of 100 Largest Ukrainian Cities) use just a little over a half of this toolkit. Now, it is up to regular citizens. If communities do not control the funds they obtain and the quality of the authorities’ work, there is no one else they can count on.

Of course, the anti-corruption achievements are not to impressive in this situation, but there are still some. Given the information is mostly publicly available, they are hard to miss.

The National Anti-Corruption Bureau of Ukraine, in collaboration with the Specialized Anti-Corruption Prosecutor’s Office, investigates cases of grand corruption featuring the country’s top officials and refers these cases to court. As the result, anti-corruption agencies and activists who support them face significant pressure (for instance, discriminatory electronic declaration is introduced for those who works with anti-corruption organizations), but the fight continues. As an eco-system in the triangle society-business-authorities, ProZorro continues to extend to cover more and more sectors. Now, we already have ProZorro.Sale, a successful system for sale of assets of insolvent banks as well as national and municipal property, and the system for digitalization of healthcare eHealth. Ukraine becomes a pioneer of publication of registers of beneficiary owners on the global level. Admittedly, the quality of verification still leaves something to be desired, but it is about steady small steps towards progress. The long-awaited cases concerning “Yanukovych sanction list” are finally getting to court, their property is seized, there are even first attempts to recover these funds to the budget. Even though these processes do raise some questions, there is some progress here, too.

We can hardly give credit for these achievements and setbacks to one single person or agency. All of us – business, the authorities, the civil society, the media, international partners – contributed to the progress and failures of 2017 together. Only working together can we launch the anti-corruption court, carry out small-scale privatization on the basis of ProZorro.Sale, establish control over transparency and accountability on the local level, make the security and defense sector more open and effective following NATO standards, reduce corruption in education, healthcare or fiscal sector in 2018. Thus, summing up year 2017, I would like to thank the team of Transparency International Ukraine, all our partners and opponents, and to urge us to work not only on increasing transparency, but also on establishing accountability in 2018. Only in that case can we make all public isntitutions more effective, instill the sense of responsible ownership of the state in every citizen and thus restrict the influence of corruption on governance in Ukraine.

Because that is our own common interest!