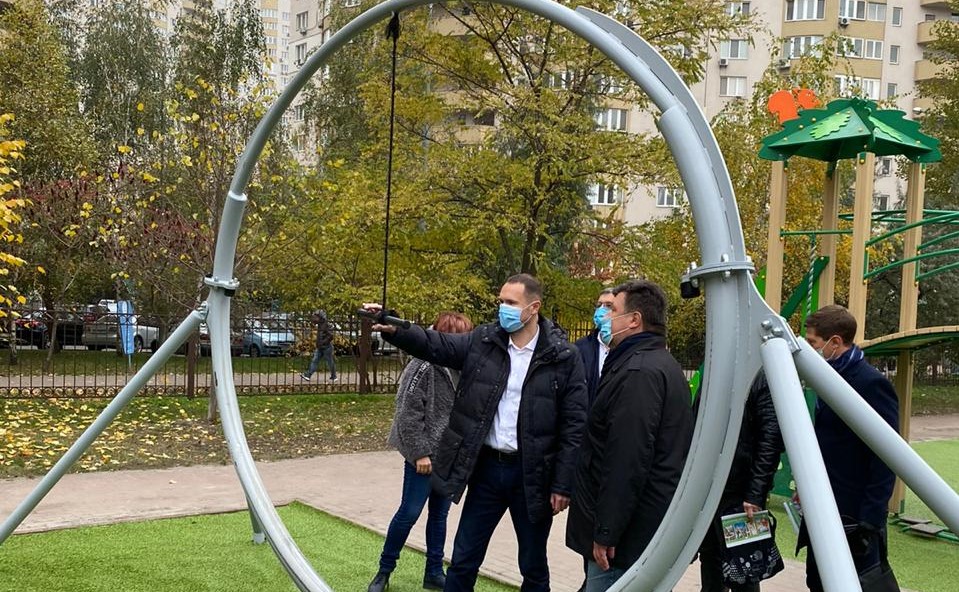 Playgrounds Above All: Where Does Money for Education Go?

How the Department of Education spent budget money on playgrounds for which no space was allocated.

When it comes to the field of school education, the community is usually sympathetic: teachers’ salaries are small, and the state allocates nothing — schools have nothing. That is why there is a need for financial assistance. And it is still not uncommon for parents to chip in for either lockers or curtains in the classroom; or chip in to buy multimedia equipment, promoting it through the draft participatory budget. And they almost certainly buy elementary items on their own: toilet paper, soap, napkins, disinfectants.

The explanation for all this is “the state has no funds” or “the district does not allocate funds.” However, active parents, especially those who have passed the school of experience exchange of the Parents SOS community, know that in reality the situation is a little different. Frequently, the district department of education does not allocate funds for what they are not forced to allocate. Not everywhere, of course, but there is such a practice: if the use of a subvention for the “New Ukrainian School” is talked about, then procurement according to it (special desks, other furniture, construction kits, multimedia equipment) is carried out in full and on time. And those expenditure items that are not in the focus of public attention are formed at the discretion of a specific head of the district department of education (DDE) or school.

And it turns out that somewhere the parents of students have long forgotten what it is to buy curtains and soap for school, and somewhere the cleaner asks the parent committee to buy new mops. Because — “and whom else to ask, the state does not give anything.”

In fact, spending on education in the budgets of local communities is not only a large sum, but also quite protected items of expenditure. For example, in the capital, the budget of the education sector is sometimes up to half of all expenditures (in 2021 — UAH 24.7 billion — 43% of all expenditures). And it depends on the district management, education department and local MPs how these funds will be distributed outside the main items (utilities, remuneration, food procurement, textbooks).

For example, last year, when the pandemic drastically changed the usual order of priorities, the district education departments had to urgently purchase masks, disinfectants, and then laptops and Internet services for teachers who worked remotely. The number and volume of these procurement transactions were decided locally, depending on the schools’ order and real needs.

And Darnytskyi district of Kyiv in the midst of the second wave of the covid incidence in the autumn of 20th decided to install children’s playgrounds in each school. The project was even shown to the head of the Ministry of Education and Science Serhii Shkarlet and called part of the NUS project “Street Space.”

The concept of the New Ukrainian School really involves more activity of primary school students and the presence of creative spaces. However, nothing is known about the separate project “Street Space.”

The playgrounds were purchased for UAH 20.6 mln. The specification to the contract refers to 38 schools, but each element was bought in the number of 15, and the Ministry of Education and Science wrote that they were installed in 15 educational institutions. Accordingly, each cost the local budget from UAH 500,000 to UAH 1.37 mln (more likely). For comparison, last year, the DOZORRO specialist Yaroslav Pylypenko analyzed the costs of Kyiv for the installation of playgrounds and sports grounds in the surrounding areas, and their average cost was less than UAH 100,000. Of course, the playgrounds are different, but why schools need such expensive ones is a good question.

The purchase of platform equipment itself was carried out with the minimum possible savings: the tender with an expected value of UAH 20.7 mln was won by the supplier, who offered a price of UAH 20.62 mln. Interestingly, the winner of the auction was TOV Budremservice, which specializes more in the renovation of premises. In Kyiv, this company won tenders from Kyivzelenbud, the Darnytskyi Department of Capital Investments and the Department of Education of the same district. It has experience in working with playgrounds, however, it is its first such a big order of playgrounds and at the same time so far the most expensive contract in Prozorro.

To clarify what mandatory program made it so expensive to arrange the street space of schools last year, we contacted the Department of Education and Science of the KCSA. There, they have no knowledge of any program and explained that decisions on the procurement of the district are made locally. We also asked other districts of the capital whether they had similar systemic procurement of playgrounds for the NUS, and received negative answers.

The Department of Education of Darnytsia district also confirmed that the playgrounds are not related to the NUS. The funds for their procurement went under the budget line “Provision of secondary education by secondary education institutions.” That is, these are the usual funds for the organization of the educational process. This year, the district decided that it was most appropriate to use UAH 20 mln for the playgrounds, rather than any other expenditures.

In general, the district department of education can be understood — the playgrounds are almost a sacred object: everyone wants them and there is never a lot of them. However, it turned out that the mandatory installation of numerous playgrounds is not always a good thing. Especially when no one asked them to.

In one school of the district, a place for a large playground, where children will spend time, was found only under the fence near the street with lively traffic. In other schools, the slides and tools were placed on the lawns between the trees, close to the windows of the classes, contrary to the norms of the National Construction Regulations. In the Slovianska school, such a slide led straight to the wall of the school and a sewer hatch, or a lightning rod. After a scandal in local communities and an appeal to the head of the district education department, some of these dangerously installed playgrounds were simply removed, where to — it is unknown.

The school No. 111, where extended day groups have nowhere to spend time at all, got no playground at all. And two schools of the district got playgrounds, both according to the purchase of the district education department and within the implementation of the participatory budget project.  That is, to put it mildly, confusion and installation for the sake of installation.

As we have already mentioned, often for cities, playgrounds are the golden standard. However, when it comes to education, the priorities are still slightly different: schools usually need insulation, repairs, arrangement, or repair of sports halls and playgrounds for physical education. But these things take longer to plan, are harder to implement, and require construction supervision and a lot of responsibility.  Just like providing schools with toilet paper/soap/disinfectants/mops requires calculations of school applications, additional orders, etc. The installation of playing complexes — where they are needed, and where not so much — is quick and easy: a month of work — and UAH 20 mln gets spent at the end of the budget year.

What can parents do about it? To control what the school where your child is studying buys, you can start monitoring their procurement.  TI Ukraine created a handbook with instructions how to do this. It describes in detail how to search for school procurement transactions, in particular using the map “What your school buys,” write information requests, and report procurement violations to law enforcement and supervisory bodies.