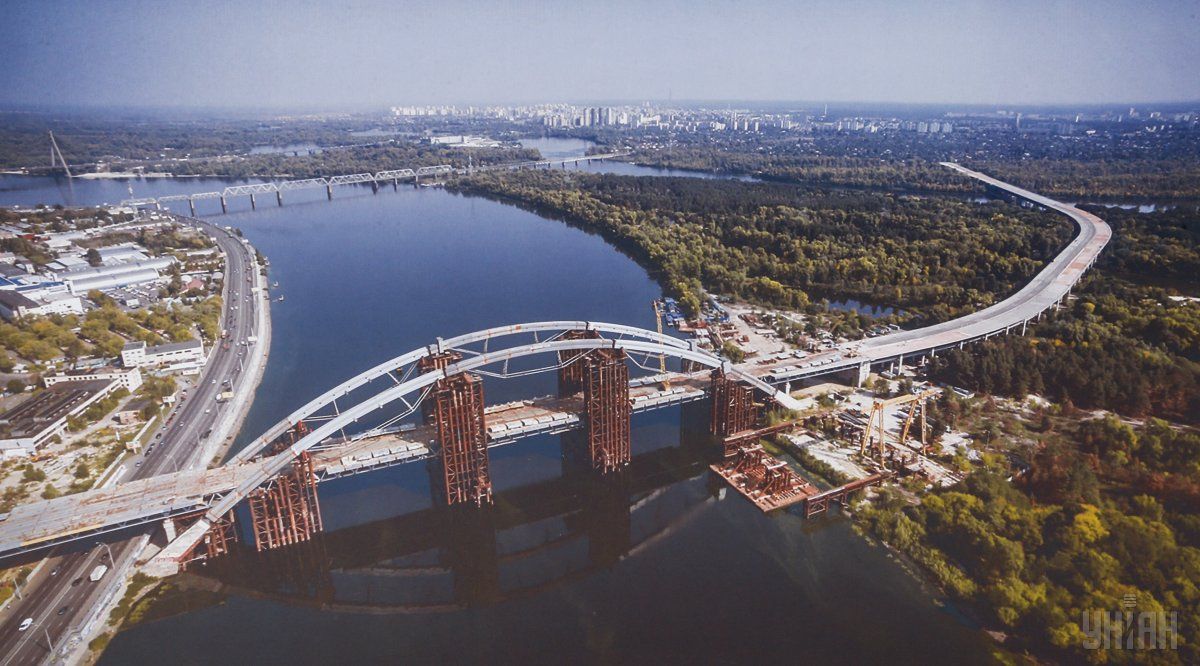 Podilskyi Bridge: When, How Much, and How Many Cases Opened

The Podilsko-Voskresenskyi bridge across the Dnipro in the capital has risen in price once again — now it costs almost UAH 20 bln, and the opening has been postponed again for at least a year.

Back in the summer, Kyiv mayor Vitali Klitschko promised to open the Podilskyi bridge by the end of 2021. In case this did not happen, he was to dismiss his profile deputy Oleksandr Hustieliev, who was responsible in the KCSA for this project.

Several months have passed. Hustieliev, who assured back in October that the bridge would be open that year, was fired in early November. No miracles.

Moreover, instead of opening the bridge, the KCSA officially almost doubled the cost of the bridge construction project — from UAH 11.2 bln (cost determined in 2016) to UAH 19.9 bln. At the same time, in the latest interviews, Vitali Klitschko assures the community that “the bridge is 90% ready.” We have analyzed to what extent it is ready, and why the price is rising.

Where does the Podilskyi Bridge lead to?

The project for the construction of a bridge crossing from the capital’s Podil to the Left-Bank Voskresenka area appeared in 1993. This bridge will be the longest in Kyiv — its total length will amount to more than seven kilometers. The structure consists of two tiers (a freeway and metro) and includes three bridges (across the harbor, the Dnipro, the Desenka, and the bridge over the Raduzhne lake is now being discussed) and several overpasses connecting them. There are six lanes for traffic. The metro level is the two tracks for future stations of the Podilska-Vyhurivska metro line, which is yet to be built. The bridge crossing project includes three stations of this line. It is the disruption of the bridge construction that is the official reason why there is still no metro in Troyeshchyna.

The main structures of the bridge across the Dnipro and overpasses on the Trukhaniv island were built in the middle of 2000s. Then there was a pause. It is under the current Kyiv mayor Vitali Klitschko that active works began regarding the bridge. In 2016, the KCSA restarted the Podilskyi bridge project and increased its cost to UAH 11.2 bln. It was then that TOV Eko-Bud-Treyd was chosen as the main contractor. This company is connected with the capital’s “underboss” Denys Komarnytskyi, whose work has raised questions with the law enforcement officers in recent years.

What has been already done?

This was reported by the acting director of ME Directorate of Construction of Road Transport Structures in Kyiv  Nataliia Khomatova during the commission meeting of the Kyiv City Council on budget issues on November 18. The head of the ME explained to the MPs why it is necessary to transfer additional funds for construction this year, and her speech was the first detailed report on the works performed.

According to Khomatova, as of November 17, the object was funded with UAH 10.653 bln. For this money, the following was done on the Podilskyi bridge:

installation, tensioning, and adjustment of guy cables of the arch bridge over the Dnipro river; dismantling of temporary surface supports, dismantling of the underwater part of temporary supports continues; bituminous concrete surface of the roadway of the bridge over the Desenka; 300 meters of reinforced concrete structures of the metro tunnel are constructed and a retaining wall on the upper side of the tunnel is partially ready; a mound of roadbed on the Rusanovski gardens is formed; the foundation and supports of the overpass across the railway are established; metal structures of the overpass across the railway are ordered; barrier railings and noise-proof walls on the structures of the bridge’s overpasses are installed.

According to the head of the ME, as of now, more work has been completed than the funding for 2021 was envisaged. Therefore, to sign these acts and move on, it is necessary to transfer funding from other objects to the Podilskyi bridge.

At the next commission meeting, on November 23, MPs agreed on this KCSA decision, and already this year, UAH 982.3 mln was allocated on the Podilskyi bridge — that is, its price increased to UAH 2.2 bln in a year. By the way, almost a billion hryvnias was taken from the construction of the metro and the reconstruction of tram lines on the Left Bank.

Answering the sacramental question of the MPs “when will the bridge be open,” the head of the Department of Transport Infrastructure of the Kyiv City State Administration Ruslan Kandybor stated the following:

“If we want to open it, we can use the service exit now.” And then he continued: “I believe that in May (2022) a full-fledged exit will be constructed to the Sadova street (Left Bank, the Rusanivski Gardens). By the end of the year, it will reach to the Honore de Balzac street. With proper funding, this is quite possible.”

It is worth noting that the exit to the Central Sadova street of the Rusanivski Gardens is the supporting one — it opens onto a single-lane (in each direction) street, although traffic on the bridge is three-lane. That is, moving down to the Gardens, the traffic flow from the Right Bank will inevitably accumulate in the “bottleneck.” The construction of overpasses and interchanges to the Balzac street (Troyeshchyna) is not even at the stage of preparatory work.

Why has the price increased so much?

First, the plan includes additional works that were not provided for by the previous adjustment — in particular, regarding the metro area. Secondly, there is an increase in prices. According to Kandybor, compared to 2016, not only wages and the cost of energy carriers have significantly increased, but also the prices for basic consumables: natural sand price has more than doubled, steel and metal structures are 3.95 times more expensive.

In addition, numerous criminal proceedings can serve as an alternative explanation, in particular regarding the embezzlement related to this construction.

The first and largest tender in the new history of construction of the Podilskyi bridge was conducted in March 2017. Even though Prozorro was already functioning at that time, the procurement was conducted outside the system because, in fact, it was announced back in July 2016, later, it was just delayed.

On March 29, 2017, ME Directorate of Construction of Road Transport Structures in Kyiv chose TOV Eko-Bud-Treyd as the general contractor for the construction of the Podilskyi bridge crossing for a total amount of UAH 6.10 bln.

At the same time, in 2017, the procuring entity conducted additional procurement of works at the same object according to the negotiation procedure. The general contractor was the same Eko-Bud-Treid. For UAH 444.5 mln, the company agreed to build a left-turn exit from the bridge and strengthen its temporary supports. This transaction was explained by a technical error because of which not all the necessary works were included in the terms of reference of the main tender. And, since they were not included in the estimate of contracts with the general contractor, the contractor automatically became the same.

In both procurement transactions, Eko-Bud-Treid acted as a general contractor and immediately stated that it would have subcontractors, cooperation with whom now concerns several criminal proceedings. In total, this company participated in only seven budget tenders during the existence of Prozorro and won five of them. Four are the procurement transactions from ME Directorate of Construction of Road Transport Structures in Kyiv, and one — from ME Spetszhytlofond (also an enterprise of the KCSA).

How many cases have been opened?

The construction of the Podilskyi bridge in its last phase (since 2016) has become one of the most expensive, resonant, and scandalous projects of the Kyiv authorities. There have been so many investigations: over the past four years, various law enforcement agencies have opened several criminal proceedings regarding the construction. And all of them relate to the part of the work that the procuring entity initially assigned to the company TOV Eko-Bud-Treid.

The first body that immediately paid attention to the tenders for the completion of the Podilskyi bridge was the National Anti-Corruption Bureau. According to the information provided to us by the NABU, their detectives are conducting a pre-trial investigation in criminal proceedings opened on June 10, 2017. It was initiated on the grounds of an offense, which, according to the Criminal Code, sounds like “misappropriation, embezzlement of property, or taking possession of it by abuse of official position, committed on a particularly large scale or by an organized group.” The defendants are deputy head of the Kyiv City State Administration Viacheslav Nepop, ex-director of the Directorate of Construction of Road Transport Structures Roman Lisnevskyi, and persons affiliated with the management of Eko-Bud-Treid.

On October 30, 2020, another criminal proceeding was registered on the facts of possible abuses during the construction of the Podilskyi bridge regarding such a violation. The Special Anti-Corruption Prosecutor’s Office combined these investigations into one, given the common subject. Currently, no person has been served with charges in this case, and indictments have not yet been referred to the court.

Then on May 14, 2019, a proceeding was opened again by the Main Investigation Department of the National Police of Ukraine (No. 12019000000000425). The investigation believes that officials of the ME Directorate of Construction of Road Transport Structures conspired with their contractors to embezzle part of the funds for the construction of the bridge. Many subcontractors were involved in the scheme to artificially inflate the cost of works.

In the spring 2020, a case was also opened by the Anti-Monopoly Committee of Ukraine on anticompetitive collusion between Eko-Bud-Treid and TOV Forma during the construction of the Podilskyi bridge for UAH 4 bln. On October 28, 2021, the companies were fined for UAH 182.6 mln. In August 2020, the AMCU opened another case on collusion for UAH 100 mln between Forma and the investment and construction company Ukrbud.

On March 12, 2021, Podilsk Department of the National Police of Kyiv opened its proceeding No. 42021100000000170. The court ruling since October of this year states that during this investigation, four persons have already been served with charges. One of them is probably Denys Komarnytskyi, after all, the investigation conducted searches on the land plot that belongs to his wife. The materials of the investigation mention searches at the place of residence of the affiliated owner of TOV Eko-Bud-Treid, who ensured the coordination of the scheme through its connections in the KCSA and the Kyiv City Council. The Podilsk department believes that the general contractor overestimated the cost and volume of works performed in the acts, and ME Directorate of Construction of Road Transport Structures still approved them. Instead, the “affiliated owner” legitimized these illegally obtained funds.

On September 2, 2021, the Main Investigation Department of the National Police opened another proceeding No. 12021000000001109. Here, the investigation also suspects collusion of officials of the ME Directorate of Construction of Road Transport Structures, PAT Mostobud, and TOV Eko-Bud-Treid. In particular, this is about overestimation of the cost of structures manufactured by PAT Leninska Kuznia Plant.

However, this is not all. On September 8, 2021, the State Fiscal Service served “an official of the enterprise involved in the construction of the Podilskyi bridge crossing” with charges. According to it, the contractor company reflected in the accounting and tax statements imaginary financial and economic transactions with enterprises that have signs of fictitiousness. They were allegedly engaged to perform subcontracting work, which allowed them to evade paying taxes to the budget. And under the fictitious acts, a VAT tax credit and expenses of almost UAH 20 mln were unreasonably formed.

Recently, the Kyiv City Prosecutor’s Office has made a statement about the largest amount of possible losses on works on the Podilskyi bridge. The prosecutor’s office reported about the attempted embezzlement of UAH 3 bln during the construction of the Podilskyi bridge crossing. The project documentation that the subcontractor was supposed to perform was forged to inflate the cost of works later.