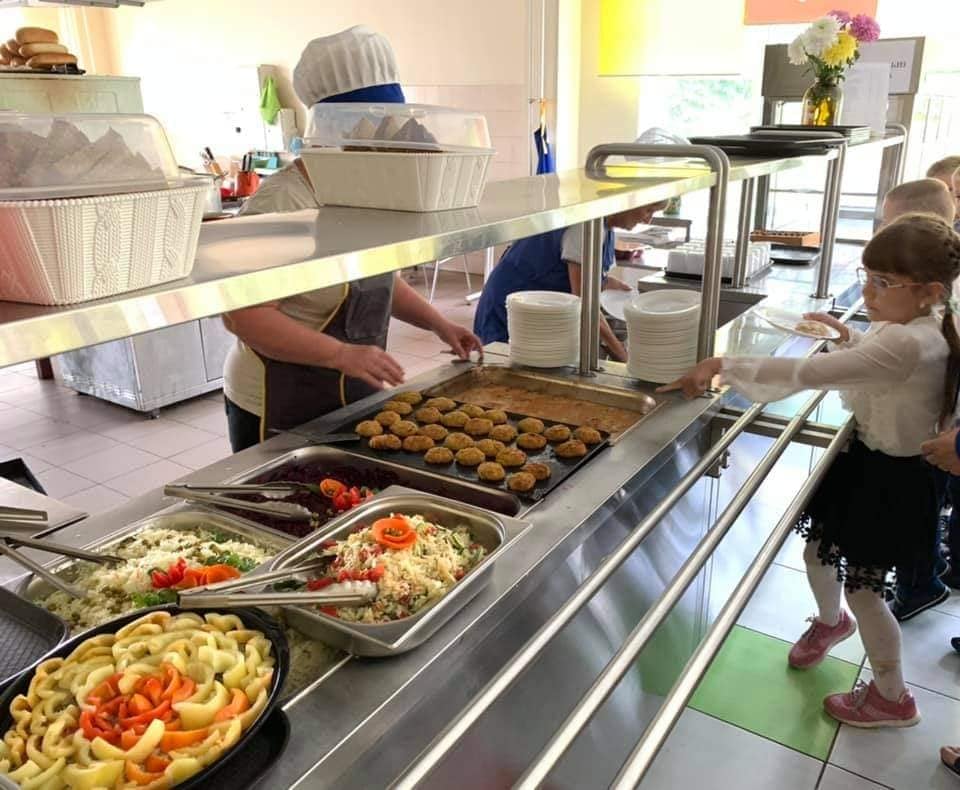 School Breakfasts in Kyiv: Binary Multi-Profile and Portions UAH 8 Each

The capital’s school food market is once again volatile because of contractors’ wars, and canteens are waiting for new equipment.

All primary school students in Kyiv have breakfast at school, fully paid for from the city budget. Each district spends about UAH 10-55 mln on such food, depending on the population. Suppliers are interested in this market, although it’s volatile.

Perhaps everyone in the country has already heard about the program of reforming school meals, in which Olena Zelenska, the President’s wife engages. The first lady raises the issue of food quality in educational institutions, diversity, changing the balance of dishes towards vegetables and proteins instead of the predominance of carbohydrates and unhealthy fats in the menu. Chef Ievgen Klopotenko created the innovative school menus according to the new standards.

“Instead, at our school, children eat burgers every day, which are not even always with meat and do not necessarily contain vegetables,” complains Natalka, the mother of a schoolgirl from the Dniprovskyi district of the capital. Parents are outraged, and children don’t eat everything.

“Burger food is still an exception. In this educational institution, it is connected exclusively with technical reasons — the food hall and canteen of the school are under repair. We just can’t cook hot dishes there, so we have to bring ready-made ones,” Ms Olesia, the representative of the supplier of schools of the Dniprovskyi district explained to us. Repairs began in August, and it is not yet known exactly when they will end.

Catering services in educational institutions of Kyiv in this area are provided by TOV Pontem.UA. The history of the arrival of this enterprise with Lithuanian roots on the Kyiv market was connected with the scandal at a school of the Darnytskyi district, what we wrote about earlier. However, after the crisis, Pontem feels confident again and now serves schools in the Darnytskyi, Dniprovskyi, and Svyatoshynskyi districts, which in terms of the number of children and cost are close to half of the entire market of the capital.

In other districts of Kyiv, tenders of education departments are traditionally won by district ME of the corresponding profile. Interestingly, regardless of the supplier (ME or TOV) and the course of the auction, the price of a school breakfast in Kyiv is approximately the same everywhere — UAH 32. But one of the districts of Kyiv this year broke all pricing records.

This school year, children of the Pechersk district receive breakfast worth UAH 8.4 per portion. Even Valentyn Mondryivskyi, specialized deputy of the Kyiv mayor, was indignant with such an unprecedented price for budget breakfasts; he promised to monitor the quality of food in the area especially closely and threatened officials with consequences.

Budget savings, thanks to the record price of breakfast, were provided by a tender held in March of this year. Procurement with an expected cost of UAH 7.6 mln after a long struggle was won by an enterprise from another city, which offered a price of UAH 2 mln. In other words, the cost in the agreement was more than three times less than expected.

TOV Kontrakt Prodrezerv 5 from Dnipro estimated their catering service at this amount. This company has extensive experience in providing catering services to state institutions of the Dnipropetrovsk region. The cost of its contracts for the largest procuring entity, the Department of Humanitarian Policy of the Dnipro City Council, amounted to more than UAH 1.5 bln. This year, for the first time, the company tried its hand at Kyiv tenders. Its abnormally low price for procurement in the Pechersk district was justified by its desire to prove itself in the market. To achieve this, it was necessary to get on it, even resorting to dumping. In justifying its reliability, Kontrakt Prodrezerv 5 showed its financial result for the past year, and stated that it was ready and could afford to conduct knowingly unprofitable activity and provide students with full-fledged, balanced, and high-quality food at its expense. 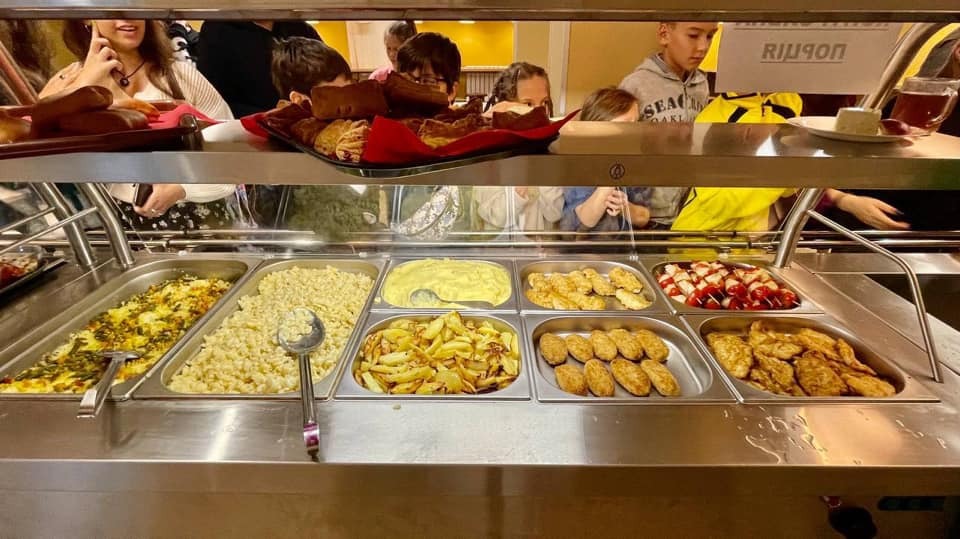 Now, the Pechersk District State Administration, where we applied with a request, assured that the breakfast portions prepared by this supplier correspond to the menu agreed by the State Service of Ukraine on Food Safety and Consumer Protection and the terms of the tender documentation. There were no complaints from school leaders, the district’s Education Department reported.

The same Dnipro company has already entered the fight for tenders in the Dniprovskyi, Svyatoshynskyi, and Darnytskyi districts of the capital. These districts no longer have their own ME for school meals and their niche was occupied by a private Pontem.UA, which this year still has retained its position in the fight against competitors.

How does all this competition affect the quality of school breakfasts — does the market give victory only to the best? In fact, this is not entirely true.

First, the approximate menu is common for all schools. And now, there is an instruction to make it multi-profile, that is, dishes to choose from. According to the responses that we received from the city’s district education departments, multi-profile meals already cover either all schools in the districts, or 80-90% in some.

However, we decided to clarify what is meant under “multi-profile meals” in the districts and found that these are actually two portions to choose from. For example: a cutlet with buckwheat or meatballs with potatoes, or pancakes with sour cream or pancakes with jam. That is, the choice is between two similar types of breakfast, and not several fundamentally different dishes, such as a side dish with meat, or casserole, or vegetable stew, or fish with a side dish. So, sometimes multi is actually a double. However, in some schools, this is still a choice of several options.

“My daughter was just thrilled when it became possible to choose breakfast from several types of salad, side dishes, meat, and desserts,” recalls Oksana from Kyiv, whose daughter is studying at a school in the Desnianskyi district. In this area, educational institutions have financial autonomy and each school independently conducts its procurement, including food. In fact, now almost all of them are won by the local ME Zenit. When the school makes its procurement, it is easier to control it, both for the institution itself and for parents. In such cases, there are no desperate comments from parents under posts with photos of the real menu on Facebook pages asking “Where is this?!”, “Come to our school and see the reality!,” as is often the case with official pages of the Department of Education and district departments.

However, good results can also be achieved when food is purchased centrally, but this is controlled by parents. For example, the “Kyivan Rus” school was even made a separate lot in the procurement of the district to make it easier to control the quality.

The KCSA also notes that the full introduction of multi-profile meals and their quality depend on the level of equipment of school food departments. The fact is that catering services actually mean that the supplier buys food and recruits employees, and cooking takes place in the same kitchens of our schools. And, accordingly, just as there are schools that differ in age and level of equipment, their food halls are just as different. Therefore, funds for updating the equipment of food departments are now allocated from a subvention of the state budget as part of the “Capable School for Better Results” program.