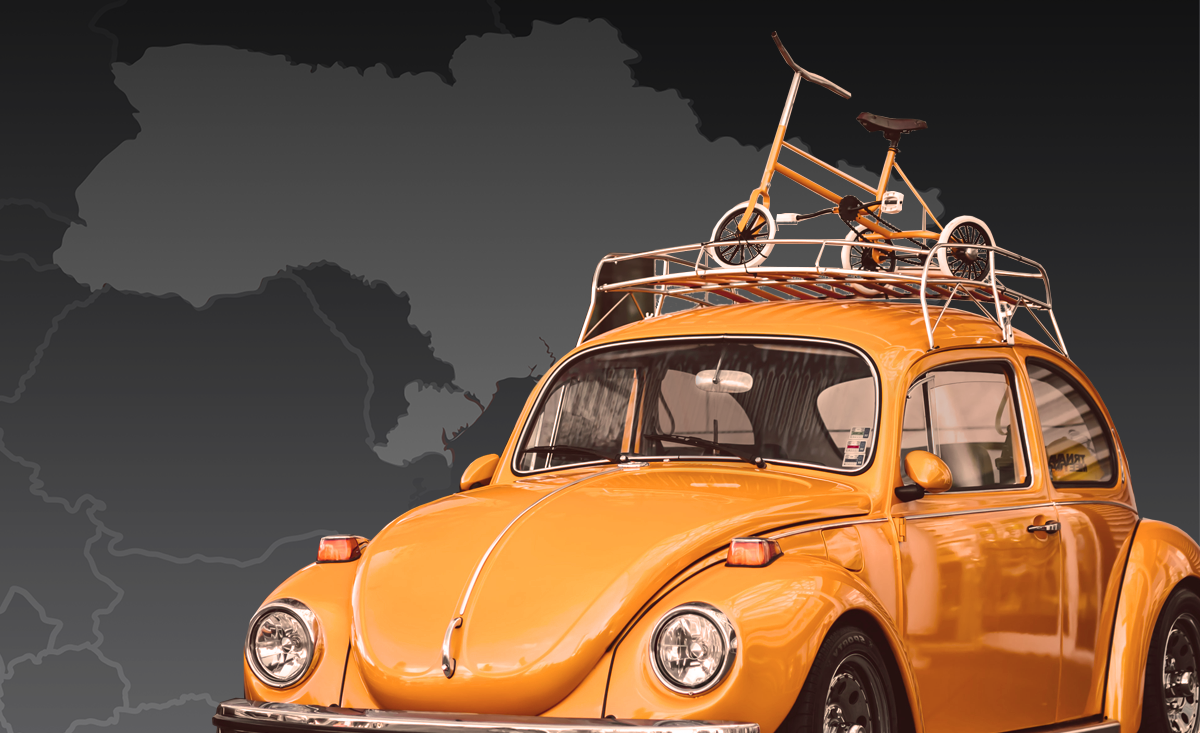 Ukraine’s Anti-Corruption Journey: What Does the Corruption Perceptions Index 2021 Reveal?

In 2021, Ukraine lost 1 point in the Corruption Perceptions Index (CPI) and now ranks 122nd out of 180 countries in the CPI list.

In 2021, Ukraine lost 1 point in the Corruption Perceptions Index (CPI) and now ranks 122nd out of 180 countries in the CPI list. What is behind this score, is it worth worrying about, and what does the general trend of Ukraine indicate? Let’s figure it out.

First of all, let’s start with the fact that the indicators of such a long-term study should be considered in dynamics. After all, the CPI indicator is not a point on the map, but a path. Today, the score of Ukraine is better than it was 10 years ago, but this improvement is due to the changes that occurred immediately after the Revolution of Dignity. Since 2018, Ukraine’s steady growth has stopped.

In general, over the past 10 years, the gradual improvement of our country’s performance has been noticed and noted by the compilers of the Transparency International Corruption Perceptions Index — Ukraine has confidently entered the list of countries that have made a significant increase in points over this decade. 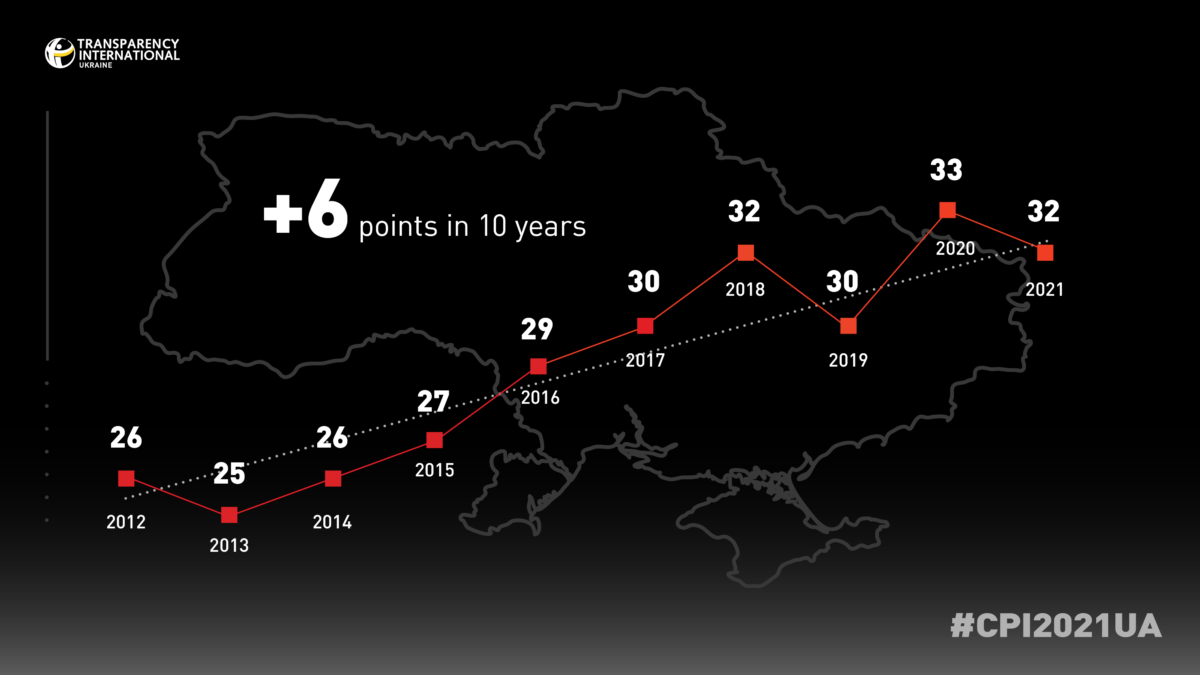 Can we call the current situation “stagnation”? Not really. Our speed recorder indicates few changes, but we are moving. Over the past year, as before, many positive events have taken place on the Anti-Corruption Front — the powers of the NACP were restored, the institution of whistleblowers was preserved and developed, HACC sentences were passed, and the civil forfeiture instrument was launched. However, too often the positive in one sector was invalidated by the negative in the other.

What hinders us on this journey, and what drives us?

Evaluating a country is more difficult than visiting an auto repair shop because it is not an easy task to study the results of actions and interactions of various government institutions at the same time. Our indicator was formed based on 9 different studies of independent sources that show the state of individual systems of the anti-corruption car in Ukraine. According to the data, 2 sources increased our scores, 3 left them unchanged, and 4 lowered them.

We received the greatest reduction in such studies:

The indicator of Ukraine, obviously, reflected the situation when the Constitutional Court with its decision of October 27, 2020, discharged many officials from liability for false declarations. According to the NABU, at that time, about 180 facts of deliberate entering of false information by officials in e-declarations were investigated. 7 persons were served with charges, but due to the decision of the Constitutional Court, all these investigations were subject to closure. The HACC closed 17 criminal proceedings and overturned sentences. Consequently, officials charged of abuse avoided any liability.

At the same time, Ukraine has gained 2 points according to the PRS Group International Country Risk Guide, which assesses corruption within the political system. Most likely, this growth concerned the launch of the electronic register of political party reporting Politdata by the NACP — the register started working in the spring of 2021. However, the long-awaited electronic reporting for political parties has not yet been fully operational, and the very process was suspended by law back in the spring of 2020 due to the COVID-19 pandemic.

Ukraine gained another 4 points in the study Varieties of Democracy, created on the basis of, among other things, the indicator of corruption in the judiciary. Obviously, the judicial reform that was launched last year by the law, but not yet implemented is not enough for a more powerful leap in this study.

Ukraine’s score remained steady in the 2021 report of Freedom House Nations in Transit. It expresses concern about the growing interference in the work of the HACC, in particular, it refers to the proceeding in the CCU regarding the constitutionality of the HACC as a specialized court. The researchers also noted an overall growing pressure on anti-corruption bodies in Ukraine. The Anti-Corruption Strategy adopted by the Parliament only in the first reading, which has been waiting for final adoption for more than a year, is also mentioned.

In other words, we see that researchers around the world notice the unpatched holes in our anti-corruption ecosystem. This has a significant impact on the perception of not only corruption in the country, but also the country itself in the world. And if we aim to get into the anti-corruption zone, we should better solve the existing breakdowns.

Where we tried to get but couldn’t

For high-quality progress without “rollbacks,” we should regularly work on errors. It’s great if we learn to give up what doesn’t work and look for more effective ways to achieve our goals.

According to the results of the last year’s CPI study, TI Ukraine provided the authorities with 3 blocks of recommendations, which could improve our performance. As of the end of 2021, none of the recommendations were fully implemented: two were partially fulfilled and one wasn’t fulfilled at all. 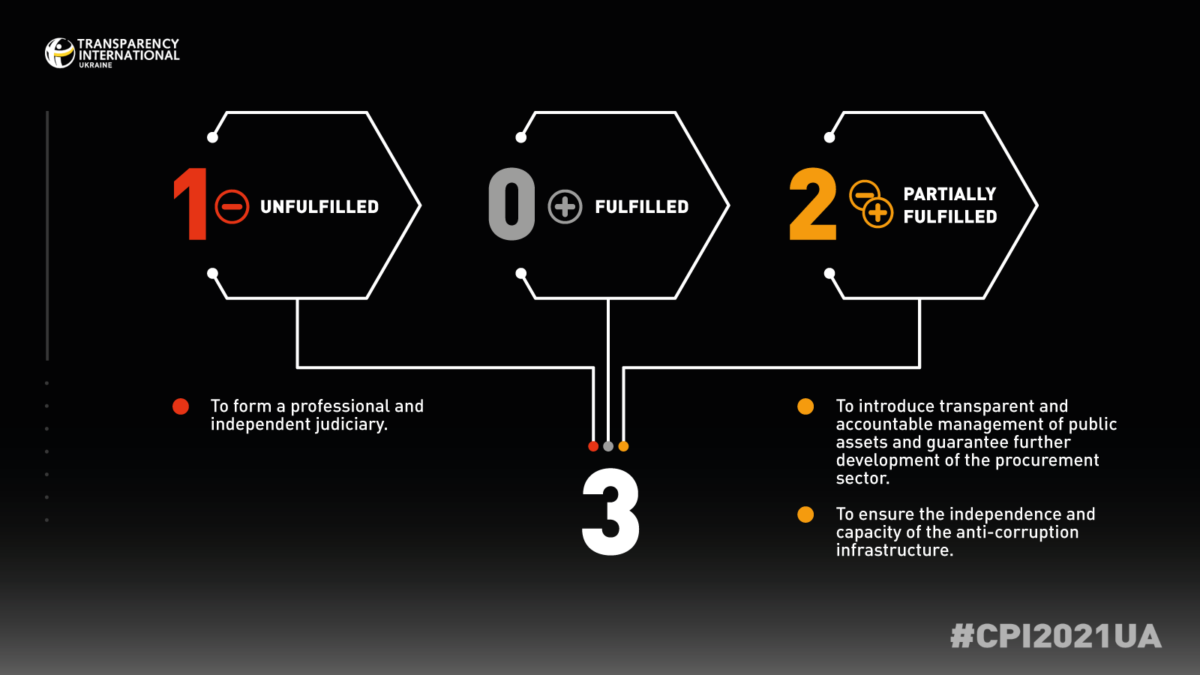 We partially managed to “resolve” the situation in the field of public property management. In a year, we managed to unblock and prepare objects for privatization. However, the accounting of public assets and access to it still need to be improved. The issue of attempts to exclude certain procurement transactions from the scope of the Law of Ukraine “On Public Procurement” is still quite acute.

The situation is worse in the direction of the independence and capacity of the anti-corruption infrastructure. Not only are the SAPO and ARMA competitions not completed, but they are also conducted with a lot of outrageous “faux pas.” Do not forget that the current CPI already considers the history with the CCU, which in the fall of 2020 paralyzed the NACP’s activities. Although the issue of counteraction of violations in the HACC’s judicial process seems smaller-scale, it is no less important — the relevant draft law was not even considered by MPs.

However, we still see some positive aspects in this sector. For example, last year, MPs did vote for the necessary changes to legislation on the ARMA, this was another step towards improving the management of seized assets. And with the newly adopted Law, the NABU is getting closer to being able to independently conduct wiretapping of potential corrupt officials.

What was unfulfilled: again, the formation of a professional and independent judiciary. Now, attempts are being made to resurrect the HQCJ and restart the HCJ; however, the current HCJ blocks the reforms in every possible way. Delaying the process creates risks of invalidating all efforts to transform the judicial system. Another problem: the KAC continues to work and issue shameful rulings, although the law on its abolition is still waiting in the wings in the Parliament. And the last nail in this construction is the story with the (under)reformation of the Constitutional Court, considering all recommendations from the Venice Commission.

What should we do? Let’s not reinvent the wheel

In order to keep going, we need to constantly pedal and move forward. Here are the recommendations for 2022 that, we believe, will help reduce the level of corruption:

As we can see, this is a fairly specific distance of 5 steps, after which we will be able to significantly advance along the planned anti-corruption route. Of course, it’s not so simple, and another obstacle can always appear on our way, which can completely throw us off course, preventing our wheel from rolling.

But if the actions of all leaders are coordinated and confident and correspond to the declared direction of overcoming corruption, we will keep the balance and be able to get to the desired destination.

We must understand that it is important to demand changes because stopping the decline and returning to at least slow growth in the Index will depend not on the next government after the elections, but on the current one. Because +6 points in 10 years is not a good enough result for a country whose leaders have set the fight against corruption as one of the priority goals of their activities. And with such speeds, you can’t get very far.