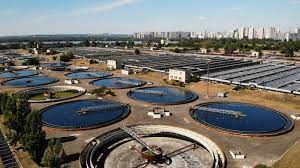 When Sewage Treatment Plants Will Be Repaired?

Bortnytska Aeration Station is being reconstructed in two directions — at the expense of a Japanese loan and the local budget. Both projects are becoming more expensive all the time and are actually standing still.

Bortnytska Aeration Station (BAS) is the only sewage treatment plant within Kyiv and a dozen other localities of the oblast, not only the Left Bank, but also in Vyshhorod, Irpin, Vyshneve, Chabaniv, Kotsiubynskyy, Sofiivska and Petropavlivska Borshchahivka. At the same time, sewage treatment plants are located within the city limits — on Kolektorna Street in the Darnytskyi district, not far from the Enerhiya incinerator. Some technological processes of sewage treatment (aeration fields, silt settling tanks) are too noticeable to residents of Kharkivskyy and Pozniaky residential areas, when the weather is warm and windless, and in summer, the unpleasant smell from silt fields reaches many kilometers around.

Why does the BAS need reconstruction?

In a nutshell — because the station is old.

Every day, the BAS receives and processes from 700,000 to 900,000 cubic meters of the wastewater. Silt fields cover more than 270 hectares. The first start-up complex of the aeration station was launched back in the 1960s, the third and the last one — in the late 1980s.

Purification at the station takes place in several stages. First, garbage is separated from the wastewater on special grids. Then sand and heavy minerals are isolated in sand traps. Next, the water is settled and purified using a special silt that acts on organic substances, in several steps. After all this, the water returns to the Dnipro.

According to PJSC Kyivvodokanal, of which BAS is a part, the quality of water purification in the capital meets the maximum permissible state standards. However, the plant owner himself notes that “due to significant changes in the composition of wastewater and the quality of silt, the existing technological schemes are obsolete and unsuitable for use without a full-fledged reconstruction.” Metal structures of technological facilities wear out and collapse, and pumping and air-blowing equipment often fails. The total percentage of deterioration of the Bortnytska station structures is 60-90%, depending on the age of the structure. The oldest one, dating back to 1967, is worn out the most.

There is also a problem with the disposal of silt deposits that are formed during wastewater treatment. In 2013, after record snowfall, when the groundwater level rose significantly, one of the treatment embankments burst, silt mixed with water, and this mixture entered the surrounding area.

So, now the BAS is a potential source of man-made danger. At the same time, it is the only sewage treatment plant in the capital and the surrounding area. That is, repairs are extremely necessary, and they have been trying to carry them out for almost ten years. Now the plant’s treatment facilities are planned to be reconstructed at the expense of a Japanese loan, and another, smaller part — at the expense of local and national budgets.

What do the Japanese do?

The international project “Reconstruction of Sewage Treatment Plants and Construction of a Technological Line for the Treatment and Disposal of Silt of the Bortnytska Aeration Station” was launched during the government of Arseniy Yatsenyuk. An agreement to attract a soft loan for it from Japan was concluded at the national level in 2015. The Japanese company JICA provides a loan in the amount of JPY 108 bln (approximately UAH 25 bln at the current exchange rate) at 0.1% per annum for a period of 40 years, with a ten-year grace period. Under the terms of the loan:
the cost of equipment and services that will be purchased in Japan must be at least 30% of the total cost of the project;
Consultant 1 and Consultant 2 are Japanese companies that were selected on a competitive basis;
the general contractor can only be a legal entity with a Japanese share of at least 50%+1.
PJSC Kyivvodokanal acts as a procurement entity, but all steps take place with the participation of the state (Ministry of Regional Development) and the city (KCSA).
The Japanese government finances the implementation of works within 1-4 start-up complexes, Ukraine takes over the fifth one.

What is the city repairing now?

In parallel, there is an entirely different project which also concerns the BAS, and also its repairs. It attracts not billions, but hundreds of millions, and not Japanese credit funds — but funds from the local budget and the State Regional Development Fund.

In addition to the actual treatment units, which will be reconstructed as part of the Japanese project, pumping stations are also an important part of the wastewater disposal and treatment system. They collect wastewater and send it to sewage treatment plants. One of them is the pumping station of the first BAS lift, which is planned to be repaired at the expense of the local budget.

“Due to the aggressive environment, it (the station) is in disrepair and is not operating at full capacity. The daily capacity of the new station will be 600,000 cubic meters/day, and by installing modern pumping equipment, we also plan to increase its energy efficiency. Energy-efficient measures will reduce the unit costs of transporting sewage by about 30%,” Dmytro Naumenko, director of the Department of Housing and Municipal Infrastructure of Kyiv City State Administration, explained last year.

The city initially planned to spend UAH 588 mln on this project. After the design work in 2018, a tender was announced with an expected cost of UAH 556 mln. The winner with an offer of UAH 510 mln (and with a competitive advantage of UAH 6!) became PJSC “Kyivmetrobud.” The works were supposed to last until the summer of 2022, but at the end of May 2021, the contract was terminated by an additional agreement as agreed by the parties. At that time, the contractor completed works worth UAH 318 mln.

The termination of the agreement probably occurred because the KCSA revised its plans for the project budget in the direction of increase. In March of this year, the mayor issued an order which re-approved the project with an estimated cost of UAH 694.5 mln. The other day, immediately after the termination of the previous agreement, Kyivvodokanal announced a new tender for the repairs of the first lift pumping station. This bidding is still ongoing, the expected cost is UAH 320 mln.

The winner of the current tender must finish constructing the pumping station by the end of 2022 (the predecessor was supposed to finish it in the summer of 2022).

So, when will all be ready?

In fact, the main part of the work — reconstruction for Japanese money — has not actually begun yet, although six years have passed since the signing of the framework agreement. According to official reports, the preparatory stages of the project continued all this time. As reported in “Kyivvodokanal,” in 2019, the company carried out the procedure for procurement of works — choosing a general contractor organization. However, the procuring entity and the Japanese consultant, in agreement with the JICA (the provider of funds), were forced to complete the procurement procedure ahead of schedule, as they found non-compliance with the criteria of the tender documentation. What exactly was wrong there, the news does not specify.

In 2020, a second procedure for procurement of works was announced. However, this time COVID-19 is to blame — at the request of the participant and the JICA, the deadline for submitting proposals was extended until January 29, 2021.

In February of this year, the technical part of the tender offer was finally opened, and in March — the financial part. According to Kyivvodokanal, the financial offer significantly exceeded the expected cost of the project, and therefore, they plan to hold negotiations on reducing the price. In the official notice, the procuring entity emphasizes that the loan funds are not a gift, and it is desirable to achieve a reduction in the cost.

In other words, it is still possible to continue the bidding process, and it is difficult to predict how quickly the procedure will end, especially, when the real work will begin.