Update (9 September 2019). According to the decision of the Verkhovna Rada Committee on Anti-Corruption Policy, it is recommended to adopt draft law No. 1029 as the basis with regard to certain changes.

One of them is immediate dismissal of NACP members after the Law comes into effect and appointment of a temporary acting Head of the NACP for the duration of the 60-day competition for this position by the Cabinet of Ministers. This procedure is worrying in the context of it possibly being appealed in court, including the Constitutional Court. This may be a threat to election of the new Head of the NACP in the competition. Independence of the NACP itself is also questionable, given it is also tasked with verification of Government officials.

We welcome strengthening of the international experts’ role. The Committee suggests formalizing mandatory three votes of international members to approve the Head of the NACP. This further extends the idea proposed by TI Ukraine concerning two mandatory votes of international members. However, taking into account the appointment of the temporary acting head of the NACP by the Cabinet of Ministers, the 6-member Commission may fail to get the fourth vote from the Government delegate. Thus, the competition will continue for over 60 days, which would weaken it.

The last idea of the Committee is retroactive 5-year suspension of public funding of political parties that overcame the 2% threshold at the recent elections that have already taken place and been recognized as valid.

What will change if the draft law is passed in the current version?

The NACP will cease to be a collegiate agency. It will have the head who will be personally responsible for the agency’s results. They will be appointed by the Cabinet of Ministers under a new procedure for a four-year term of office without the right to be reelected.

The NACP will receive automatic access to the Unified State Register, the property register, other registers; it will have the right to request explanations from civil society organizations, citizens, economic entities, which is the missing link in verification of e-declarations as it is now.

The NACP will create a special e-declarations procedure for the SBU and the External Intelligence Service (Art. 52-1 of the Law on Corruption Prevention). This special procedure will not apply to positions openly appointed or dismissed by the President.

The limitation period concerning administrative sanctions for corruption will increase from three months to two years.

Once in two years, three individuals delegated by international organizations and approved by the Cabinet of Ministers will perform external audit of the NACP. The conclusion that the head of the NACP works ineffectively will serve as a reason to terminate their term of office ahead of schedule.

On 29 August 2019, the President filed urgent draft law No. 1029 on amendments to certain legislative acts of Ukraine concerning ensuring the effectiveness of institutional mechanism for corruption prevention.

What is the current situation?

Civil society activists have compiled a “black list” of failures of the National Agency for Corruption Prevention that illustrate the problems with NACP’s independence. The Agency maintained its collegiate model. Some NACP members had no experience with corruption counteraction and management on the national level. Full-fledged verification of e-declarations with access to all the necessary registers did not start working. There have been issues with the verification procedure and the subjects of declaration, too.

The NACP will cease to be a collegiate agency. It will have the head who will be personally responsible for the agency’s results. They will be appointed by the Cabinet of Ministers under a new procedure for a four-year term of office without the right to be reelected.

What is suggested? Commentary.

TI Ukraine and its partners have been reiterating the need for a draft law which would reboot the NACP since 2017, as well as on the fact that the current selection board should be replaced. The new head of the NACP, accountable for all the Agency’s focus areas, should also be selected by experts nominated by international organizations with clear selection criteria and transparent procedures.

The draft law stipulates this in the form of appointment of the Head of the NACP by the Cabinet of Ministers for a four-year term of office. A new selection board is created from six people selected by the Cabinet of Ministers (including three nominated by international organizations). Four votes are enough to make a decision, but it would be advisable to specify that at least two of these votes should be from representatives of international organizations. The Head can also appoint three deputies, the chief of staff and their deputies, as well at no more than six heads of territorial subdivisions of the NACP. The maximum number of staff members is not limited.

At the same time, the draft law contains many fundamental things which allow to improve the anti-corruption infrastructure: 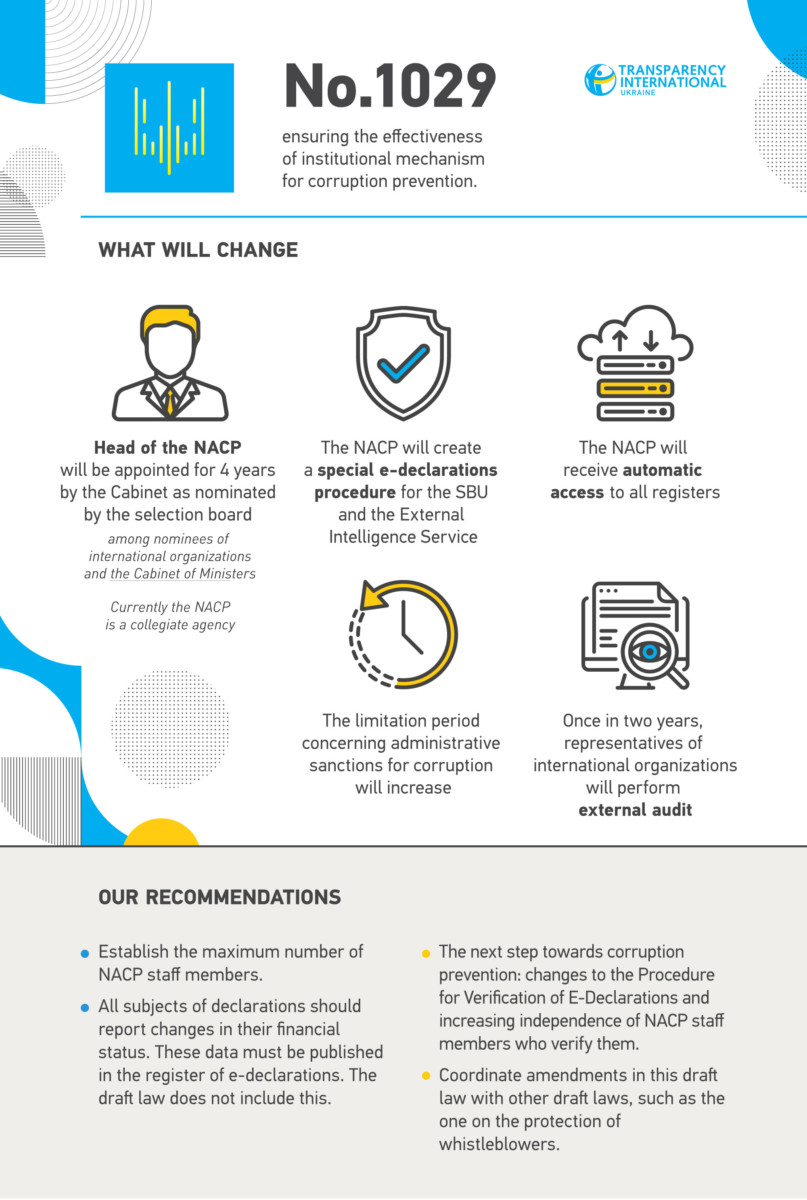 This draft law is in conflict with amendments in other draft laws to the same articles.