On August 29, President Zelenskyy submitted to the Parliament urgent draft law No. 1009 on improvement of certain provisions of the criminal procedural legislation.

The following was formalized in the legislative level:

At the same time, the Parliament maintained the so-called Lozovyi’s amendment concerning calculation of the period of pretrial investigation (from the moment information is entered into the Unified State Register) and disputing serving with charges.

In addition to that, the Parliament refused to review MP immunity, which is among other things included in the CPC and in the designated law, as part of the same draft law. We expect these amendments to follow up as soon as possible.

The National Anti-Corruption Bureau of Ukraine and the State Investigation Bureau will be granted the right to independent wiretapping.

The NABU will also have the opportunity to have undeclared staff members.

Prosecutor General, their deputy, heads of regional prosecutor’s offices will be able to delegate serving with charges to other prosecutors or investigators.

Investigative judges will be granted the right not to establish the amount of bail in grave or especially grave crimes.

State institutions will no longer have monopoly over forensic reviews.

What is the current situation?

Almost everyone at least marginally involved with this has been emphasizing the need to pass changes to the Criminal Procedural Code. Since the moment of its adoption, the Code has been through numerous amendments, which were not always in accordance with other legislation in effect or could be inconsistent with practical challenges.

In this draft law, there are several key points that will directly affect the work of the anti-corruption infrastructure and on the system of criminal justice overall:

Eliminating restrictions for investigative action concerning Members of Parliament. Until September 3, and the Parliament vote to abolish the immunity of Members of Parliament, the Constitution and a number of laws, including the Criminal Procedural Code (Article 482, part 2) declared that MPs can be brought to criminal responsibility only if the action is approved by the Parliament. This was introduced to prevent political pressure on the Parliament. But the actual experience in Ukraine has proven that in most cases, MPs view their immunity as a way to escape responsibility for certain actions.

Instead of collecting evidence and other investigative action, law enforcement representatives had to convince MPs that they had to approve bringing their colleagues to criminal justice. Not to mention that, even if the Parliament did approve the action, the individual under investigation would be already aware and prepared, they could destroy evidence and influence the case. The proposed changes to the Criminal Procedural Code are in line with the amendments to the Constitution passed today.

Granting the NABU and the SIB the right to independent reading of information from telecommunication networks as part of undeclared investigative action. Today, these agencies are not allowed to wiretap without the SBU and the National Police. This has proven an issue in certain criminal proceedings. How can you organize wiretapping of a deputy minister or the minister’s son if one of those agencies answers directly to the minister?

Ukraine’s international partners and civil society organizations have that it is important to resolve this issue multiple times. That is why amendments to the Law of Ukraine “On the Radio Frequency Resource of Ukraine,” which define the NABU and the SIB as special users of the Ukrainian radio frequency resource, are positive changes designed to support the independence of these agencies.

Furthermore, it is proposed to repeal the amendments to the Criminal Procedural Code introduced in connection with the so-called Lozovyi’s amendment, adopted in 2017. It is suggested to recover the “old” procedure for calculation of the pre-trial investigation period, appointment and conducting of the forensic review (the review can be initiated by the parties, and the monopoly of public expert establishments for the review is abolished). The changes will also put an end to the possibility to dispute being served with charges.

Experts have emphasized numerous negative consequences of changes to the Criminal Procedural Code in 2017. Thus, if they are cancelled, it will have a positive effect on the pretrial investigation process.

Today, the Criminal Procedural Code of Ukraine stipulates that when the investigative judge issues the decision to apply interim measures in the form of jail time, he or she is obliged to establish the amount of bail, with a few exceptions. Due to these standards, the investigative judge in high-profile corruption cases was obliged to establish the bail and corrupt officials would be bailed out immediately. This can be illustrated by the recent case with former Minister of Healthcare Raisa Bohatyriova.

According to the amendments proposed in the presidential draft law, the investigative judge will not have to establish the amount of bail in a criminal proceeding concerning a grave or extremely grave crime.

It should be noted that bail is a way to ensure certain pretrial conduct as opposed to actual punishment. The suggested amendment to the CPC does not resolve the wider issue with the practice of using detention as an interim measure in criminal proceedings. In its decision of 26 June 2019, the Constitutional Court of Ukraine stated that jail time is an extreme interim measure which is applied only if the prosecutor has proved that no other interim measures can prevent the risks set forth in Article 177 of the CPC (Purpose and reasons for application of interim measures).

There is a special procedure to serving certain categories of people with charges, as established by Article 37 of the Criminal Procedural Code. Defense attorneys, local council members, mayors are served by Prosecutor General, a Deputy Prosecutor General or the head of a regional prosecution, while a Member of Parliament, a SAPO prosecutor or an employee of the NABU — by Prosecutor General.

This leads to difficulties — for instance, when Odesa mayor Hennadii Trukhanov was acquitted, the court said that he was served with charges by “an unauthorized individual” (a NABU detective), which means that he is technically not considered a person brought to criminal responsibility.

With the proposed amendments, the Prosecutor General and other authorized officials will have the right to delegate this function to optimize the work of law enforcement agencies.

Changes concerning the terms of the competition for positions of undeclared NABU staff members can also be considered positive. They are designed to develop the idea of undeclared staff members of law enforcement. One example of such work includes “agent Kateryna” and the case of MPs Rozenblat and Poliakov. This may have a positive impact on the work of law enforcement agencies in the long run.

Thus, the proposed legislative amendments eliminate a number of drawbacks currently present in the criminal process and simplify the pretrial investigation procedure: they abolish restrictions of investigative action concerning members of parliament, grant the NABU and the SIB the right to independent wiretapping, abolish the infamous “Lozovyi’s amendments,” grant the right not to establish the bail amount in grave and especially grave crime cases, extend the circle of people who can have the right to serve high-ranking officials with charges and provide the NABU with the opportunity to have undeclared staff members.

Together, all these changes improve the efficiency of pretrial investigation, including that in high-profile corruption cases. We are convinced that when law enforcement agencies receive all the tools for professional and independent work, it will contribute to establishment of rule of law in Ukraine. 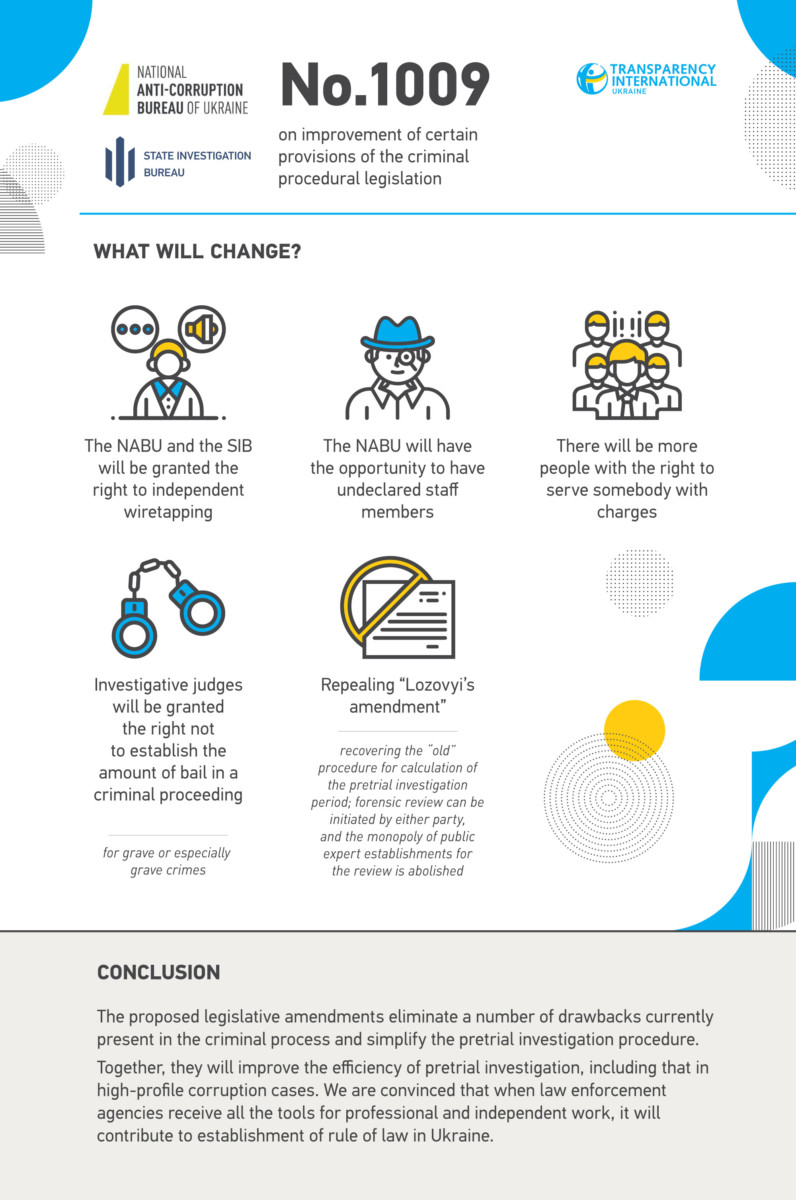 Until September 3, and the Parliament vote to abolish the immunity of Members of Parliament, the Constitution and a number of laws, including the Criminal Procedural Code (Article 482, part 2) declared that MPs can be brought to criminal responsibility only if the action is approved by the Parliament. This was introduced to prevent political pressure on the Parliament. But the actual experience in Ukraine has proven that in most cases, MPs view their immunity as a way to escape responsibility for certain actions.