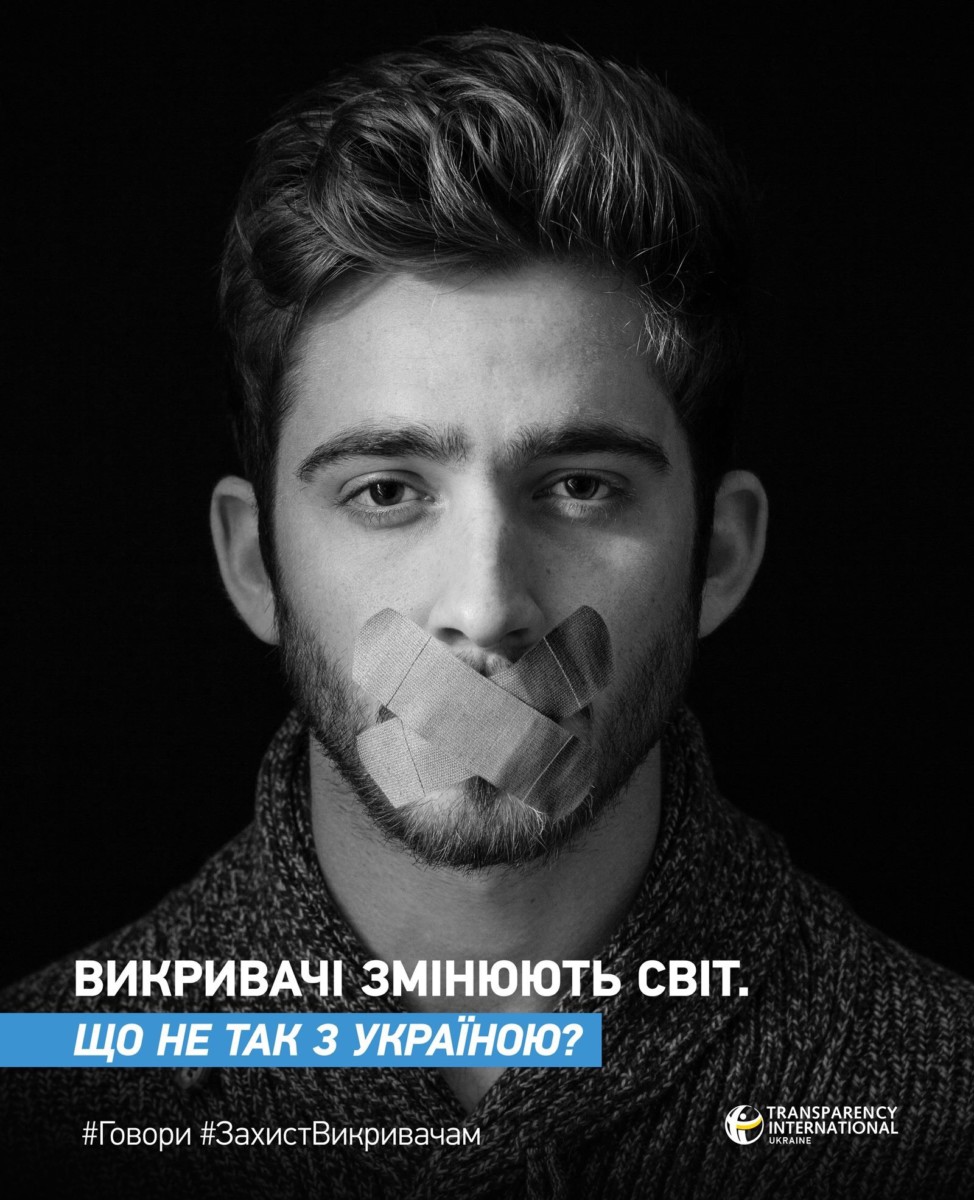 It is a great opportunity to let the world know that the fight against corruption would be impossible without whistleblowers. On this occasion, we must also mention that such people need support and guarantees of security from the state.

They are brave citizens who inform others about matters of corruption that they have personal knowledge about, for instance at work or in university. Larysa Holnyk, a Judge from Poltava, is a famous whistleblower who rejected a Deputy Mayor’s bribe. Hanna Solomatina is a whistleblower who made information about corruption in the NAPC publicly available. Last year, our lawyers worked on more than one hundred messages from whistleblowers, in which they disclosed alleged violations of the law.

Read more about TI Ukraine’s support of whistleblowers in 2018 in it’s annual report.

What should you do if you know about ongoing corruption?

Use the online “Manual for whistleblowers” http://vykryvachi.trudovi.org/, which has easy-to-find answers for those questions.

There is no special law for whistleblowers, so there is no ironclad guarantee of safety from the state. Labor legislation and laws on access to public information and corruption prevention are the only protection for potential whistleblowers. “Would-be whistleblowers are discouraged from coming forward by lack of faith. People are sure that changes are almost impossible. The perception of risk stops them. They are worried about their own safety and about finding themselves without work and a source of money,” explains Legal Advisor for TI Ukraine, Oleksandr Kalitenko.

How can we begin to support whistleblowers right now?

It is almost too easy for those of us who hold mobile phones in our hands.

The Transparency International Global Movement has produced a set of GIFs and stickers for social media. Open search GIF on Facebook, Messenger, Instagram, type #WWBD2019, an you’ll see it. Add them to your photos on the June 23rd.

“Would-be whistleblowers are discouraged from coming forward by lack of faith. People are sure that changes are almost impossible. The perception of risk stops them. They are worried about their own safety and about finding themselves without work and a source of money,” explains Legal Advisor for TI Ukraine, Oleksandr Kalitenko.

What is in the world?

If speaking about legislation, for instance, in the EU until 2021, all member countries must improve their national laws to meet community standards.

Next we want to tell you about the stories of people, and how they won and lost, in their fight against corruption in different countries. It is one of our small campaigns on social media in 2017. #Whistleblowersprotection

In 1959, Frank Serpico began working for the New York Police Department (NYPD) while on probation. Frank published his first official report on “widespread systematic police corruption” in 1967. The police did not respond to his report, however. Serpico filed a formal complaint with the police commissioner, and later with the mayor. Both ignored him as well.

Four years later, disappointed, Serpico exposed the NYPD’s violations in The New York Times and gave testimony against the lieutenant involved in corrupt schemes with clandestine gambling establishment. He became the first officer in the history of the Department to report corruption in the NYPD. Serpico was later promoted to the rank of the detective. In May, 1972, he was awarded the Medal of Honor, the highest honor in the NYPD, for his honesty and bravery in fight against corruption. “Serpico,” a 1973 biography by Peter Maas about Frank Serpico’s work, sold over 3 million copies.

In 1972, William Mark Felt, an FBI agent nicknamed Deep Throat, informed reporters that U.S. President Richard Nixon had a part in the Watergate scandal. The scandal began when five spies were apprehended breaking into the office of the Democratic National Party, which led to a number of discoveries of clandestine activities by members of the Nixon administration targeted largely at political opponents and those who the administration viewed as suspicious.

At the height of the political scandal, Nixon resigned to avoid impeachment, while 69 people were charged and 48 were ultimately found guilty in related litigation, including the Director of the Committee to Re-Elect the President, John M. Mitchell, Chief of Staff to the President, H. R. Haldeman, and Counsel to the President, John Ehrlichman who all served prison sentences. Felt’s anonymity as a whistleblower was maintained until 2005. Recently, he was featured in a movie titled “Watergate: Fall of the White House.”

Bridget Khainish worked as a nurse in Berlin in a home for the elderly. She told managers about how some of the residents were treated poorly. Khainish was ignored, so she filled an application to initiate a criminal case on behalf of the resident. She was fired.

German judge instance court rejected her claim but the European Court of Human Rights decided that Khainish’s right to freedom of expression had been violated. Loyalty to and allegiance with an employer is not required of an employee if the employer participates in illegal activity. After the European Court decision, a German Labor Court upheld a decision on compensation for Khainish at the amount of 90,000 Euros.

On October 4, 2010, over 800 million liters of caustic red waste were spilled at a Hungarian aluminum processing plant. Seven people died, hundreds were injured or forced to flee their houses in several villages, and tens of millions of Euros worth of property has been destroyed. Some plant employees knew the crisis with the reservoir was possible, but the director had threatened them with retaliation if they reported it to the authorities.

A Hungarian law protecting whistleblowers was passed only two years after the tragedy in April 2012.

Salt Lake City journalists found evidence of lavish gifts for the president of the International Olympic Committee, Juan Antonio Samaranch, from officials who represented the chosen competition venue. While other IOC employees took measures to “handle the crisis,” Marc Hodler simply told the press in 1998 that the accusations of bribery were not only fair, but barely the tip of the iceberg.

He said that there were officials who had been taking bribes from mayors in the amount of up to $1 million for over ten years. Samaranch threatened to file a lawsuit against Hodler, but the investigation found IOC guilty of corruption. While some members were expelled from the committee, others received a warning. Hodler himself continued to coach skiing and worked for the Olympic Games until his death in 2006.

One of the most famous whistleblowers in Slovakia is Jozef Žaťko. In 2012, while working as a soccer referee, he discovered one team’s attempts to bribe him and other relevant officials. Additionally, while working in the Ministry of Internal Affairs, Jozef reported theft of fuel by government drivers. They chose to ignore him, taking it instead as a recommendation to be less obvious about their illicit activities. But Jozef made it public. At work, he was called “an offended cop” who “spills unfounded false information.” Žaťko received four disciplinary actions over four months and his paycheck was cut in half. Eventually his accusations were confirmed, however, and the government suddenly reduced fuel expenditure by 30,000 liters per month! Žaťko was nominated for Global Integrity Award from Transparency International and received another award for helping society and for brave civil action.

The Most Famous Czech Whistleblower

Over the course of four years, Libor Michálek uncovered two national scandals and became the most famous whistleblower in Czech history. In 1996, he was fired from the Czech National Property Fund after exposing a tunneling embezzlement scheme. He won the subsequent court case, however. In December of 2010, thanks to the actions of Michálek, the Environment Ministry was caught red-handed when they wanted to take120 million Euros intended for reconstruction of a water treatment plant and give this money to the Civic Democratic Party.

The Environment Minister, Pavel Drobil, whom Michálek served as advisor and audiotaped during the planning of the scheme, resigned the next day. Libor Michálek received numerous anti-corruption awards. In 2012, he was elected to the Czech Senate.