Mariupol: transparent procurement, but areas of finance and communal property are not disclosed to public

Mariupol is open in the area of information availability about the local authorities, ​​participation as well as procurement. But such areas as grants allocation and finance, as well as communal property are not disclosed. In the transparency rating of the hundreds of largest Ukrainian cities, Mariupol is on the 57th place and received 28.05 points out of 100 possible points.  The research is prepared by Transparency International Ukraine and the Institute for Political Education.

The team of analysts developed a top of cities using 91 indicators in 13 areas, including budgeting, land use, personnel policies, procurement, online services, and much more.

In the area of ​​communal property, finances and grants, the city scored zero. It means that local authorities should disclose lists of citizens received material and other assistance and those citizens who did not. Local authorities should also improve such areas as the openness of the social services, which received only half a point only.It is necessary to publish statistics and reports on social services including the information about sex, age, social and demographic groups of applicants.The highest scores have the work of local authorities – 5.5 points, as well as access and participation – 4 points.

“57th place in the ranking is higher than obtained by some regional centers. A great step towards transperancy was the introduction of the ProZorro.Sales. Thus, we believe that other cities should follow an example of Mariupol. There are also many responsibilities of local authorities required improvements“, explained the project Transparency International Ukraine “Building Transparency in Ukrainian cities,” Kateryna Tsybenko.

“Some state and municipal enterprises perform in the black box mode. We are able to make an analysis of their performance post factum only. To reach results, we require access to information in order to influence implementation processes at the initial stage, but not to deal with the consequences only. The successful launch in Prozorro.Sale suggests that society demands such issues as openness and a great desire to build efficient state property management,” explained the head of the tender management of the Mariupol City Council Mykhailo Ivchenko.

“The evaluation of Mariupol illustrated that it is not enough to declare openness, and the local government is far from true transparency. There are positive developments regarding the openness of procurement related to budget cost, the implementation of legislation when making decisions by local authorities. The doors of the city government remain closed to the community. Citizens of Mariupol are deprived a chance to participate even in a passive manner in activities of the local government and do not have access to basic information on urban land and property; they do not know how to manage public funds and utilities,” says the coordinator of the Center for Community Initiatives and the NGO “Action Team “Together” Petro Andriushchenko.

Transparency International Ukraine and the Institute of Political Education are ready to cooperate with the authorities and local activists of Mariupol, as well as to give them recommendations and advice them on possible ways to increase city transparency. Decentralization is a part of current reforms and we must not allow widespread corruption to flourish.

The project “Building Transparency in Ukrainian Cities” is supported by the United Nations Democracy Foundation. 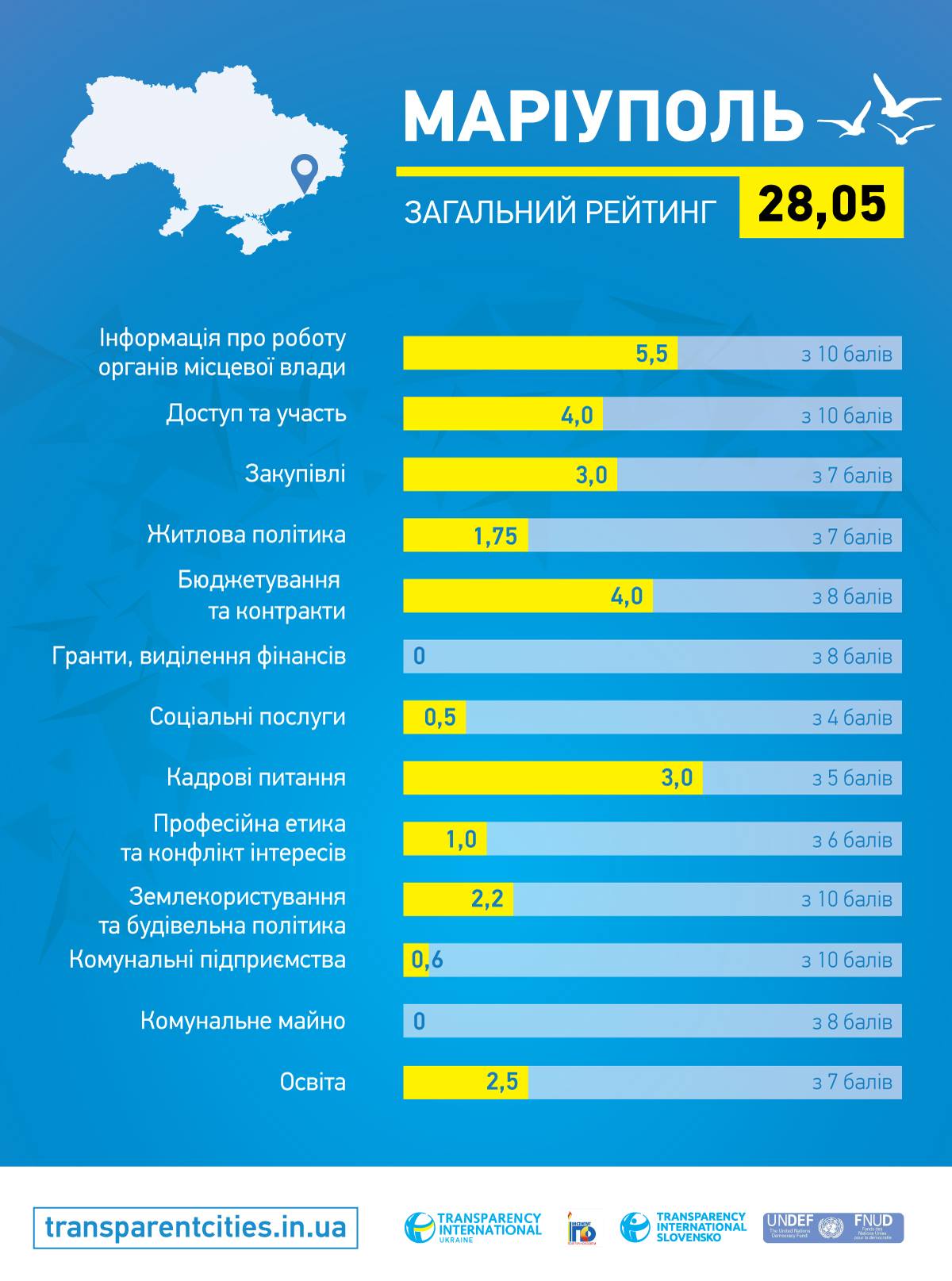