Odesa has a relative transparency in the sphere of information on the work of local authority bodies, access and public participation in decision-making process. The city is closed concerning housing policy, social services and professional ethics regarding conflict of interests. Such results allowed Odesa to be on the 39th place in the transparency rating of 100 cities of Ukraine and got 32.53 points out of 100 possible. The research was conducted by Ukrainian branch of a global network Transparency International with The Institute for Political Education. Top cities were ranked according to 91 indicators in 13 spheres, including budget process, human resource issue, public procurement, availability of online services and other.

In general, 32.52 points for an oblast is an undesirable outcome. No doubts, a main city of the oblast should set the tone. But to take an example of transparency from Odesa is untimely.

In Odesa, the spheres of housing policy and social services have proven to be the most closed – zero point for each. In open sources, there is no even a list of social service facilities, no information about electronic services by the bodies and reporting about provided assistance.

The research recommendations for the bigger openness in the sphere of housing policy is to create a system of electronic registration applications for housing and an online queue that allows applicants to track their status, to publish information on methods and criteria for housing allocation, to make available information on dwellings owned by the community and to update information at least once every 6 months.

The best situation in the city is in the sphere of the work of local authority bodies (6.6 points), access to information and public participation (6 points), human resources issue (4 points), the use of lands and construction policy (3.7 points). But it still should be more done to make these spheres more transparent. 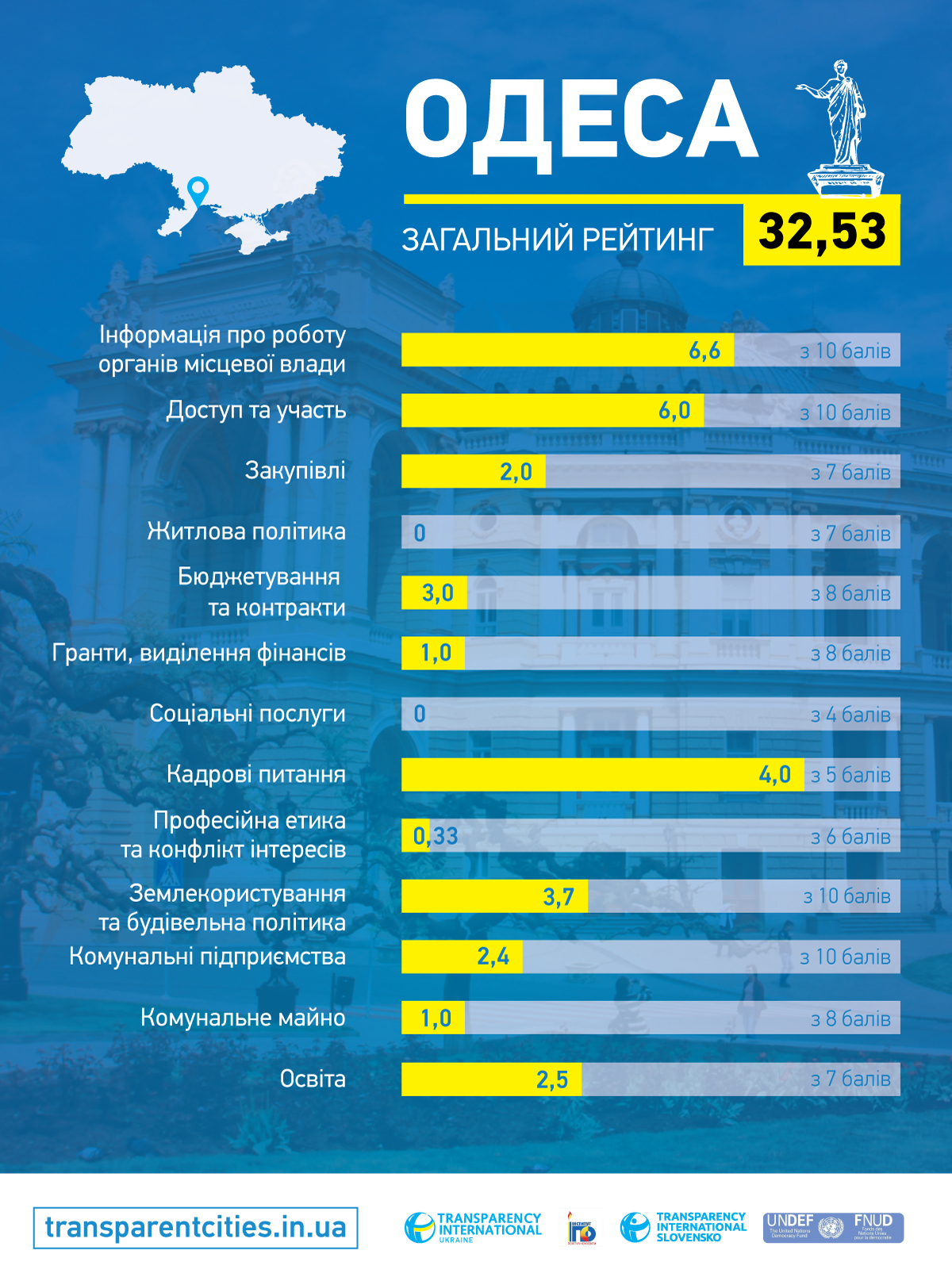 According to the head of the Transparency International Ukraine’s project “Building Transparent Cities in Ukraine”, Kateryna Tsybenko: “The sphere of professional ethics and conflict of interest leaves much to be desired in Odesa. The sphere earned only 0.33 points and it is too small for a such strategically important seaport. We recommend Odesa to adopt the code of deputy ethics and the code of ethics for public officials, to establish a specific reporting instrument for unethical behavior, discrimination or the conflicts of interest of officials, to clearly indicate on the official website political affiliations of deputies and to adopt a special document that regulates prevention of conflicts of interest.”

As Anatolii Boiko said, a representative of public partnership “for Transparent Budgets”: “The level of transparency of the Odesa city council’s activities has sharply deteriorated in recent times. If there were only passive resistance and hiding of information earlier, now mayor’s office has prevented access to information”.

Transparency International Ukraine and Institute for Political Education are ready to cooperate with the authority and local activists of Odesa, and to propose their recommendations and advices on increasing transparency of the city. Because at this moment the process of power de-centralization is going on in the country, at the same we should not allow de-centralization of corruption.