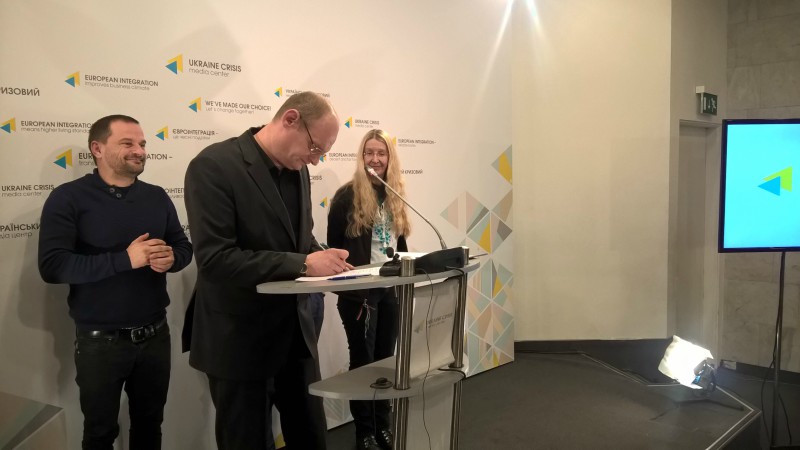 The Ministry of Healthcare of Ukraine, IT-managers, and Civil Society Have Agreed on the First E-Health Service

The Ukrainian Ministry of Healthcare, IT-managers, and civil society organizations signed a technical Memorandum on the development of the first e-Health system service. The product is a collaboration of stakeholders based on the ‘Money Follows the Patient’ principle, which is the basis of the healthcare system reform. The implementation of the e-system will keep track of agreements between a doctor and patient. It enables control over finances and prevents wasting them on ‘virtual’ doctors and patients.

Transparency International Ukraine, represented by the Chairman of the Board Andrii Marusov, also signed the Memorandum. ТІ Ukraine will serve as a guarantor of transparency during the course of reform development and implementation. Andrii Marusov stated:

‘THE ENTIRE SYSTEM MUST BE FULLY OPEN AND TRANSPARENT FOR EVERYONE. FROM THE VERY BEGINNING, AND IT MUST BE PROTECTED FROM CORRUPTION. THE MOST IMPORTANT THING IS THAT ALL THE DECISIONS ARE MADE THROUGH DIALOGUE AND COMPROMISES BETWEEN THE STAKEHOLDERS. THIS IS A STRATEGY OF THE UKRAINIAN SOCIETAL DEVELOPMENT. THE EXPERIENCE OF CREATING PROZORRO IS A UNIQUE EXAMPLE FOR THAT.’

The process of concluding agreements at the initial stage, according to the reform:
A citizen chooses a family doctor, pediatrician, practitioner, and concludes an agreement
The National Healthcare Service contracts the entity
The Deputy Minister of Healthcare, Uliana Suprun, expressed her hope that the eventual Ukrainian e-Health system would become a model for other countries to follow. The same with the ProZorro system. The initial service, which is likely to launch next week (registration of agreements between a doctor and a patient), enables financial monitoring. The system will allow for establishing contacts between patients and doctors as well as doctors and the Ministry.

‘WHEN THE SYSTEM IS LAUNCHED, THERE WILL BE MORE ECONOMY, FEWER MISTAKES, MORE LIFE, AND MORE OPPORTUNITIES. NEXT YEAR, 88 BILLION HRYVNIAS WILL BE INVESTED INTO HEALTHCARE. WHEN UKRAINE BECAME INDEPENDENT, NO ONE UNDERSTOOD HOW THIS MONEY WAS SPENT. IT WILL BE THE FIRST TIME WHEN WE FIND OUT HOW RESOURCES FUNCTION AND HOW MUCH HEALTH THEY SAVE‘.

Deputy Minister of Healthcare Pavlo Kovtoniuk noted that more than 120 experts and volunteers are working on the initiative. The group’s rate of progress, according to
P. Kovtoniuk, is very good. And the openness of the project’s format, in spite of the difficulties when making decisions, is the right choice. The Deputy Head of the Presidential Administration Dmytro Shymkiv drew attention to the fact that there are not many examples of the successful implementation of e-Health projects across the globe. The reason is that all of them were implemented top-down. That is why the principles on which the Ukrainian e-Health system is based, distinguish our country from previous attempts.
The pilot version of the first project will be developed in the two months following the signing of the Memorandum. The first Memorandum, declaring the intention to collaborate in order to build a transparent and efficient healthcare e-system in Ukraine was signed in the Ministry of Healthcare on November 25, 2016.
To join the initiative, please email memorandum.moz@gmail.com
The key documents concerning the initiative are available at https://goo.gl/PKpAKc
You are also welcome to read frequently asked questions about the eHealth system of Ukraine.