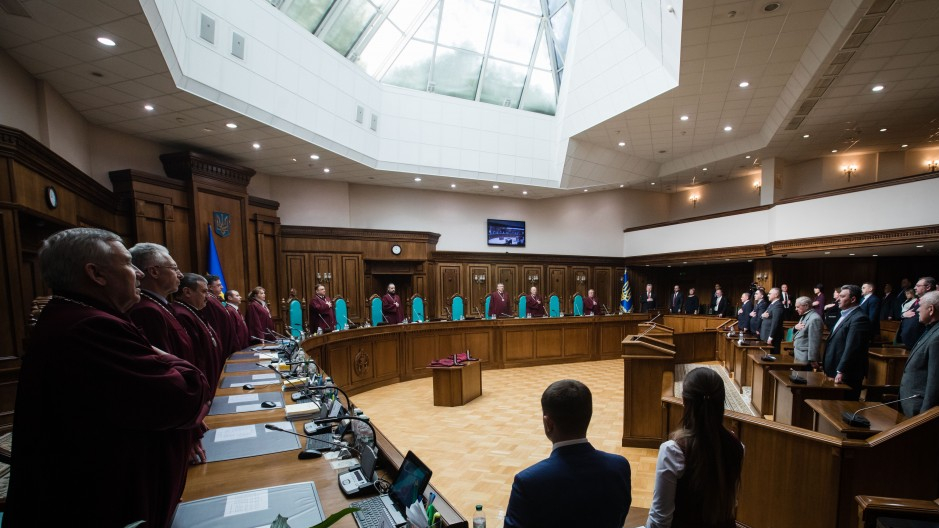 The Unconstitutional Nature of “Illicit Enrichment” Means Amnesty for All Officials

On February 26, it was reported that the Constitutional Court allegedly recognized the Criminal Code article that criminalizes illicit enrichment of public officials as unconstitutional.

Decriminalization of illicit enrichment will mean complete amnesty for absolutely all public officials with questionable wealth, which means it effectively invalidates the entire anti-corruption reform in Ukraine.

This decision of the Constitutional Court will entail closure of at least 50 cases concerning potentially illicit enrichment of high-ranking officials that are currently investigated by the National Anti-Corruption Bureau, as well as closure of proceedings in all cases that are currently being examined in courts.

Moreover, everyone subject to electronic declarations will be pardoned for questionable assets obtained during the past two and a half years, since the moment when the current version of criminal liability for illicit enrichment came into effect.

The decision on the unconstitutional nature of this Criminal Code article will be retroactive in effect. The assets of public officials that exceed their official income by millions may be recognized as fully legal.

If the liability for illicit enrichment is abolished, the concept of officials’ electronic declarations will be invalidated. The declaration system will transform from a tool used to disclose assets obtained through corruption and to bring those responsible to justice into a system of public information on officials’ enrichment.

With no liability for illicit enrichment in place, public officials will declare luxurious wealth with no fear and without any legal repercussions.

The crime of falsehood in the declaration may also be rendered meaningless, because if acquisition of questionable assets becomes legal, there will be no “need” to include false information in the electronic declarations.

Decriminalization of illicit enrichment violates Ukraine’s international commitments and may lead to termination of its cooperation with the International Monetary Fund. Under the IMF terms, funding is denied to any country that has violated any of the important commitments of the past years, even if the current commitments are fully met.

Decriminalization of illicit enrichment will effectively mean ensuring public officials’ impunity at the cost of significant financial problems for all Ukrainians.

We would like to emphasize that there are no legal grounds to consider the crime of illicit enrichment unconstitutional or to recognize that it violates the presumption of innocence.

The idea that the crime of illicit enrichment supposedly forces an individual to prove her or his innocence is not consistent with reality.

The burden of proof of illicit enrichment lies upon the prosecution. To categorize an action under the CCU, Art. 368-2, the prosecution will have to prove every element of the legal definition of the respective crime.

Moreover, all the doubts about the validity of the evidence of guilt presented by the prosecution have to be interpreted in favor of the accused.

The practice of the European Court of Human Rights (the decision in Salabiaku v. France) proves that when it comes to important public interests, as long as the individual’s right of defense is ensured, the criminal law allows reasonable and proportional assumptions concerning a certain fact or right.

It should be noted that the version of the Criminal Code of Ukraine, Article 368-2 on liability for illicit enrichment complies with the United Nations Convention against Corruption, ratified by Ukraine in 2006.

Major anti-corruption organizations urge the Constitutional Court not to compromise Ukraine’s future for the sake of the political elite wishing to rob the country and remain unpunished. 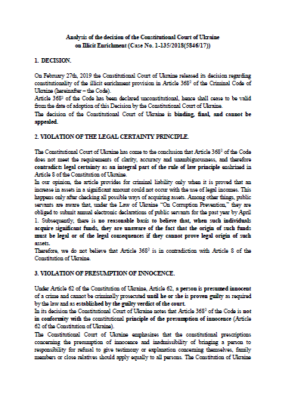 Analysis of the decision of the Constitutional Court of Ukraine