TI Ukraine asks the Parliament to deal with the issue of 1,5 billion dollars confiscation by the General Prosecutor’s Office 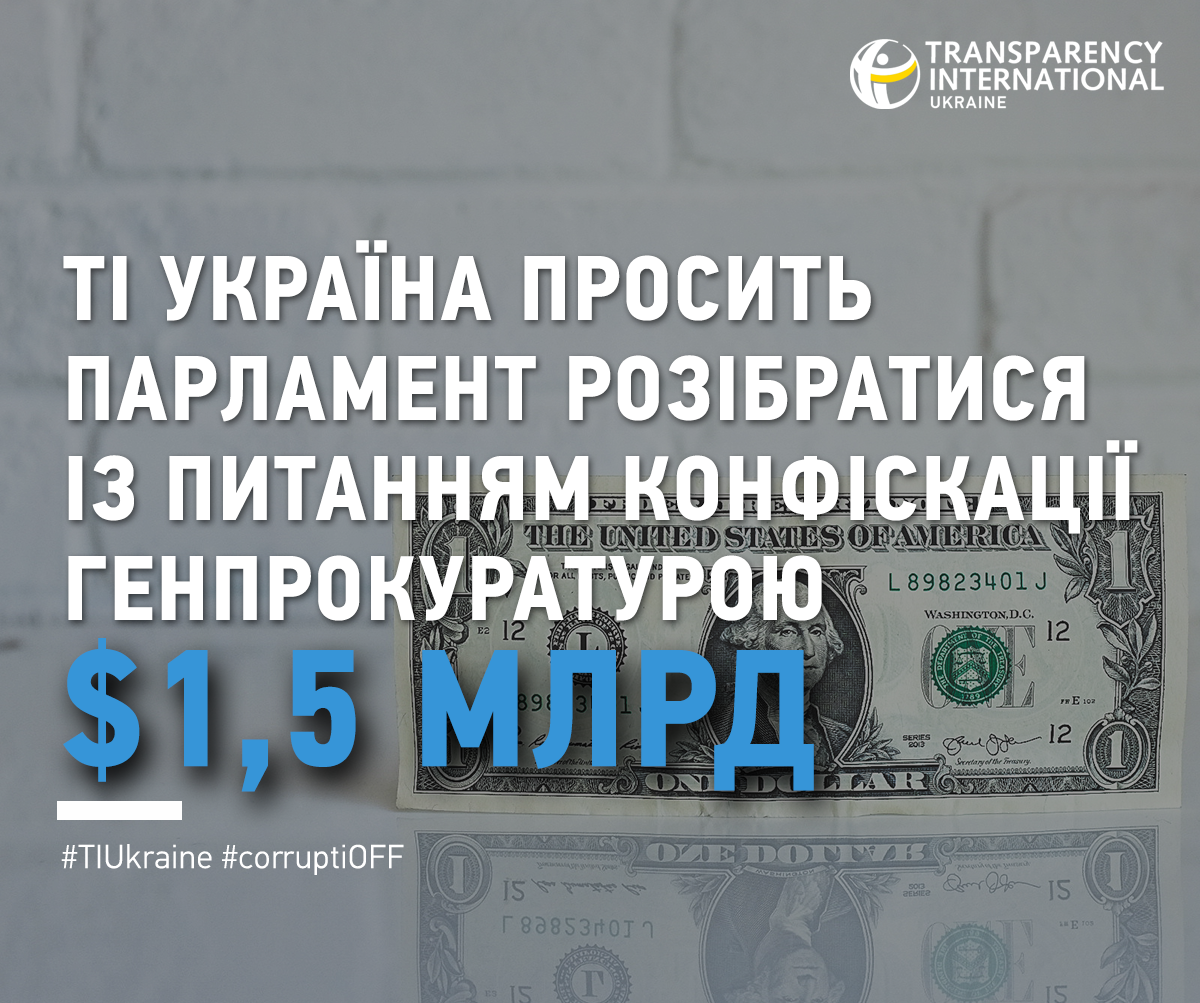 Transparency International Ukrainian has written the open letter to Andrii Kozhemiakin, chief of the Committee of the Verkhovna Rada of Ukraine on Legislative Support of Law Enforcement, and, Yehor Sobolev, the chief of the Committee on Corruption Prevention and Counteraction. Lawmakers are requested to investigate the case of possible violations on the part of Prosecutor General’s Office while confiscating 1,5 billion dollars stolen during the former regime of the ex-president Viktor Yanukovych.

The organization asks the committees to convene an open session from July 3 till 7, 2017 and invite to it the Prosecutor General, Yurii Lutsenko, and examine the legal aspect of the confiscation of the funds stolen from Ukraine. Besides, TI Ukraine asks to invite the representatives of non-governmental organizations, in particular of the coalition the Reanimation Package of Reforms, to participate in the session.

Lutsenko officially admitted the confiscation of 1,5 billion dollars on the 28th of April, 2017 and underlined it was achievement of the Prosecution Office work. The necessity for the Parliament to interfere into the stolen assets confiscation arose because of the court verdict on the case not being published in the official record. However, such a procedure is predisposed by the legislation. The funds confiscation were mentioned by the Prosecutor’s Office in a number of publications about achievements of Mr. Lutsenko and his inner circle. Regularly in press, the Prosecutor General mentioned the personal contribution of the prosecutor Kostiantyn Kulyk to this case. Meanwhile, the illegal wealth accumulation of Mr. Kulyk was investigated by the National Anti-Corruption Bureau and the bill of indictment has already been submitted to the court.

However, the excerpts of the sentence that got leaked to the media led to more questions than answers. In particular, why were the criminal proceedings on economic crime investigated by the military procurator’s office? Why was the case examined by the court of Kramatorsk? How could it happen that the court decided upon the sentence on the 28th of March whereas the court proceeding was initiated only on the 15th of March? How could the person be sentenced for money laundering if there had been no financial crime detected?

Authorities’ ignorance towards the requests to publish the court verdict only questions its legitimacy. The representatives of the judicial authority didn’t provide for a long time any competent explanation of the absence of the court verdict in the open registry.

Since the General Prosecutor’s Office strives so much to avoid the verdict publishing, hopefully the mechanisms of the parliamentary control will allow the people’s deputies to examine its legal sufficiency.

TI Ukraine emphasizes that the case of the stolen assets confiscation means a lot for struggle against corruption in Ukraine. That’s why TI Ukraine encourages the appropriate parliamentary committees to interfere into this process. Otherwise, not following legal proceedings while confiscating can create the possibility for the owners of 1,5 billion dollars to file a dispute regarding the decision to the European Court of Human Rights.