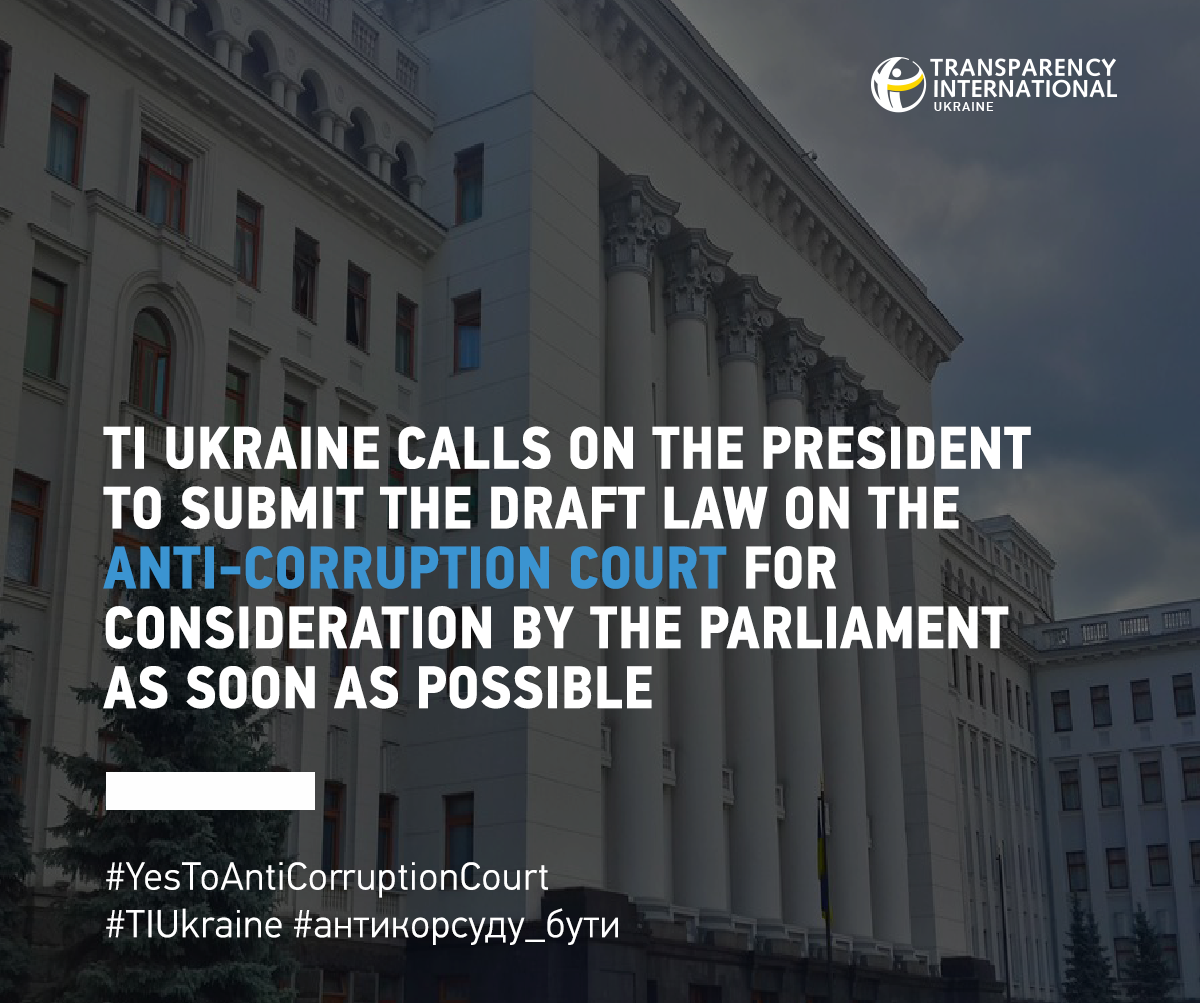 Transparency International Ukraine calls on the President of Ukraine to submit the draft law on the creation of the High Anti-Corruption Court for consideration by the parliament as soon as possible. The chapter of the global anti-corruption network is convinced that there is no need for an additional working group to discuss the main points of the draft law in question.

Recently, namely, on November 6, representative of the President of Ukraine in the Verkhovna Rada Iryna Lutsenko spoke about the President’s readiness to submit the draft law on the anti-corruption court for consideration by the parliament within two weeks. At the same time, Ms. Lutsenko presented the President’s stance on the need for an additional working group to develop the main points and principles of the draft law.

TI Ukraine is convinced that the President’s draft law should be based on the groundwork developed by the expert group, set forth in draft law 6011 “On Anti-Corruption Courts,” taking into account the recommendations of the Venice Commission presented in its opinion of October 6, 2017, namely:

· Exclusive jurisdiction over cases submitted by the NABU and SAP;

· Creation of an independent appeal chamber;

· Candidates for the positions of judges have to be selected at an open competition with the participation of international partners;

· Anti-corruption judges have to be provided with high remuneration and a sufficient level of security.

Thus, there is no need for creation of another working group for development of the already existent provisions of the draft law, which have been recommended for use in the opinion of the Venice Commission.

“The absence of proper judicial examination of cases of corruption-related crimes committed by top-level officials is an urgent problem that has to be solved immediately. It is the creation of an independent and effective anti-corruption judicial body that is the most effective way to resolve this problem,” states Executive Director of TI Ukraine Yaroslav Yurchyshyn.

Moreover, we believe that the most appropriate time for MPs to discuss and amend the draft law is its consideration in the second reading.

TI Ukraine calls on the Verkhovna Rada of Ukraine, upon submission of the draft law on the anti-corruption court by the President, to consider it promptly in the first reading without application of any supplementary procedures that are not provisioned for in the parliamentary rules.

May we remind you that Ukraine already has a legislative framework for independent anti-corruption judiciary. Namely, the updated Law “On the Judiciary and the Status of Judges” provisions for the creation of the High Anti-Corruption Court of Ukraine.