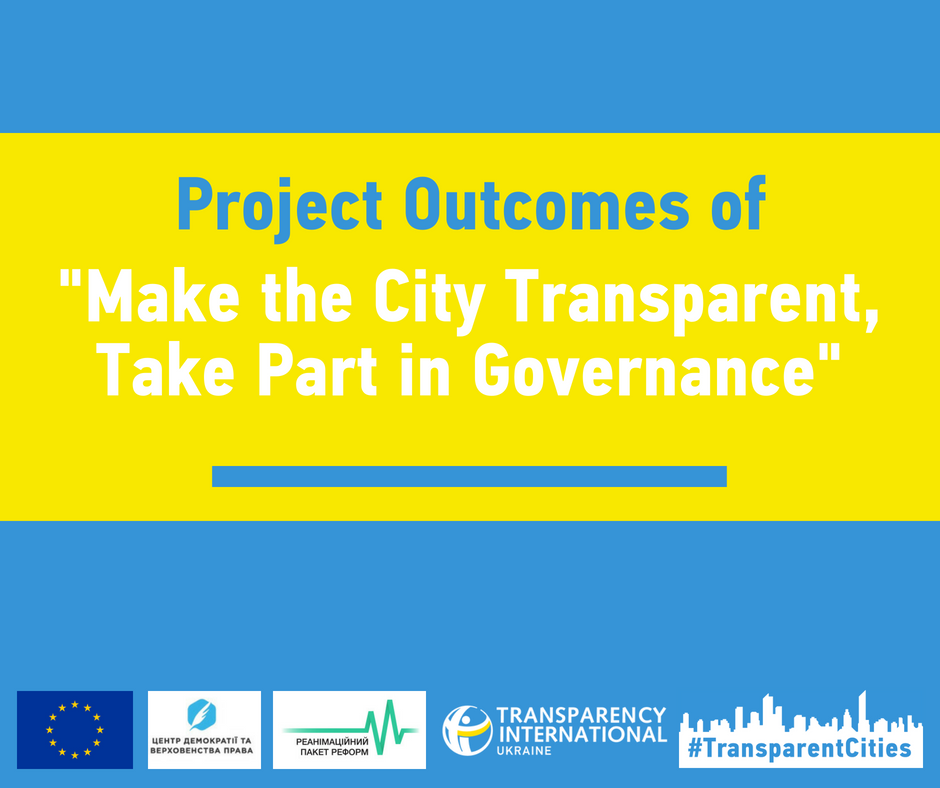 TI Ukraine Has Completed Implementation of the Project “Make the City Transparent, Take Part in Governance”

TI Ukraine, in collaboration with the Center for Democracy and Rule of Law, as part of the project Strengthening RPR Coalition, implemented with the support of the European Union, has completed the implementation of the project “Make the City Transparent, Take Part in Governance.”

The project aimed at mitigating corruption risks in local self-government through increasing the level of transparency and providing the citizens of Mariupol, Melitopol, Sievierodonetsk and Irpin with tools of participation and dissemination of positive experience.

The four cities have been selected based on 2 main criteria: 1) the lowest level of transparency in such areas as education, social services, housing, land use, construction (based on the Transparency Ranking of 100 Ukrainian Cities). Since regular citizens are engaged as new activists as part of the project, these areas were selected as those that are “closest” to the citizens. The cities were also chosen based on their position in the ranking – the middle or lower (Melitopol – 52nd place, Mariupol – 57th, Sievierodonetsk – 73rd, Irpin – 75th); 2) readiness of the local authorities to collaborate with the public (based on the previous collaboration experience).

During the 8 months of project implementation, the team of Transparent Cities, in close cooperation with activists and local authorities of the four cities, managed to achieve quite considerable results (find infographic below).

–              Mariupol has become the leader of the transparency ranking of 100 biggest Ukrainian cities. Before the start of the project, Mariupol was on the 57th place and had 28.05 points. Now, Mariupol is the winner with 65.82 points. Mariupol is the highest scorer, which managed to make its transparency score almost twice as high as before. They managed to improve the following accountability areas significantly: municipal property (by 6.2 points), municipal enterprises (by 3.77), procurement (by 3.2), budgeting and contracts (by 3). What made this success possible is regular and fruitful communication between the team of Transparency International Ukraine and the authorized person in the local authorities responsible for improvement of Mariupol’s score in the transparency ranking.

–              During the period of project implementation, Melitopol improved its transparency score and moved from place 52 to 18, raising the score by 12.5. Before the start of the project, the city had 29.2 points, now it has 41.73. The biggest growth dynamics can be observed in the areas of budgeting and contracts (almost twice as high as before), information on the work of local authorities (twice as high), social services (twice as high). The procurement area also showed positive dynamics. It is also noteworthy that the city now has a working group on raising the city’s transparency, meetings are held with structural units and entities.

Irpin moved from the 75th to the 69th place, gaining 3.5 points. The city managed to improve Education, which is where the said 3.5 points have been gained. Another positive outcome is that there is now a person in the city council responsible for providing recommendations to structural units and controlling their implementation.

–              Information campaign aimed at raising the level of people’s awareness of the possibilities and advantages of monitoring and control of the local authorities reached 1200 people in the 4 cities.