Transparency International Ukraine welcomes the President’s stance on the need to imrove upon the draft law on the High Anti-Corrution Court. The chapter of the global network offers its idea of changes which would correspond to the opinion of the Venice Commission of October 6, 2017. TI Ukraine’s vision of the mechanism of selection of Anti-Corruption Court judges takes into account the concerns expressed by representatives of the Ukrainian authorities.

On January 16, 2018, at a meeting with heads of diplomatic representatives of foreign countries and international organizations, the President urged them to help to eliminate the shortcomings of draft law #7440 “On the High Anti-Corruption Court.”

The key issue of the Ukrainian public and international partners with the text of the draft law in question was the strictly advisory role assigned ot the Public Council of international experts in the process of selection of judges. At the same time, the Venice Commission, in its opinion of October 6, 2017, advises to assign the crucial role to international experts with the aim to ensure independent and unbiased selection process. The same concern was expressed in the letters sent to the Presidential Administration of Ukraine from the International Monetary Fund and the World Bank.

TI Ukraine offers its own vision of the candidate selection mechanism, which will take into account the recommendations of the Venice Commission and at the same time adhere to the principle of integrity of the status of judges.

We suggest that the Public Council of international experts should define whether the candidates meet the criteria of professional ethics and integrity in the process of qualifications assessment. It would include lawfulness of income sources, correspondence of the candidate’s lifestyle or the lifestyle of his or her family members to the declared income. However, the assessment of candidates, application submission and appointment of candidates would be executed by the High Qualification Commission of Judges and the High Council of Justice. This is required by the law of Ukraine “On the Judiciary and the Status of Judges.” Thus, the Public Council of international experts would only establish the fact of inaptitude, which would prevent the individual from further participation in the competition for the position of a judge. However, the selection itself will be carried out by the national judicial governance agencies.

Thus, we suggest introducing provisions which would set forth this selection mechanism to the draft law. It will allow to change the role of international partners in the selection process as recommended by the Venice Commission and yet fully comply with the existing Ukrainian legislation. 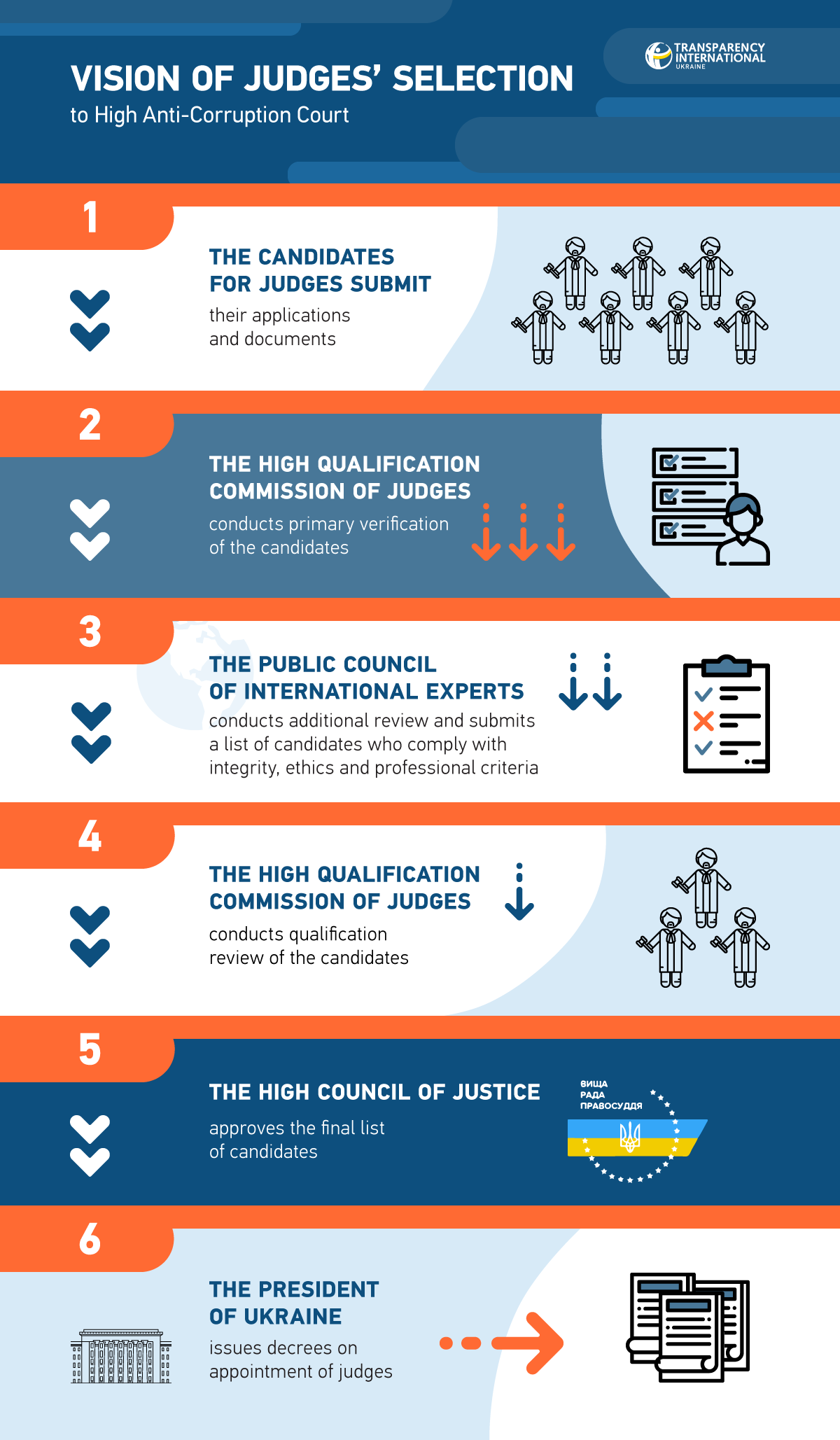