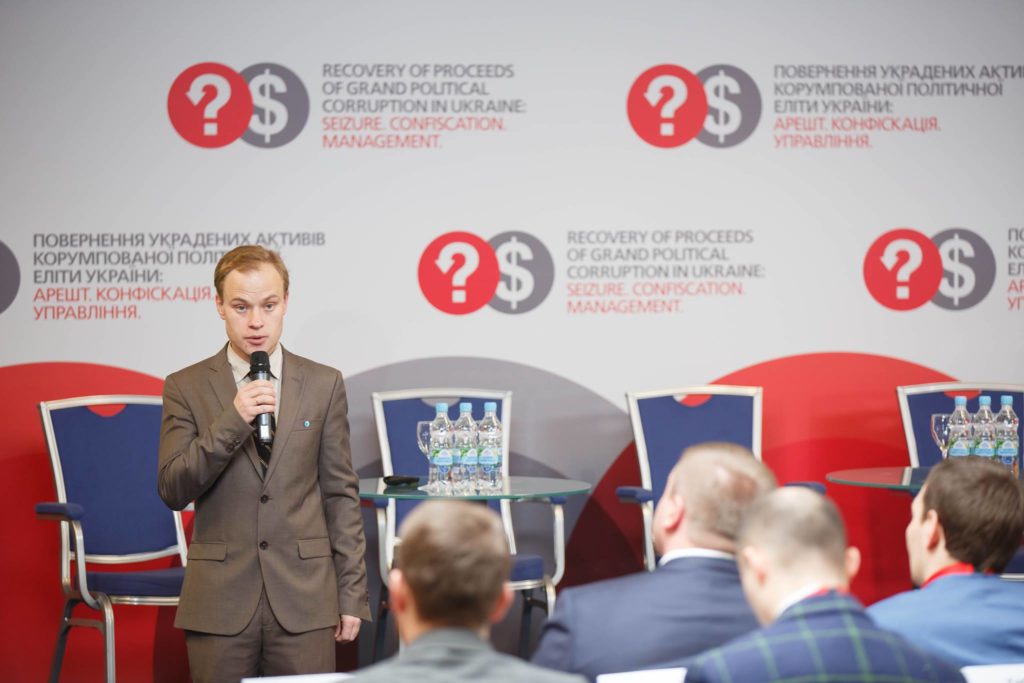 Only on the condition that prompt and decisive actions are taken, Ukraine has a  last chance to recover corrupt assets of the Yanukovych regime. This was the general conclusion of the Third International Conference on the Recovery of Assets Stolen by Corrupt Political Elites, chaired by the Anticorruption Action Centre and Transparency International Ukraine.

Ukrainian authorities have not done enough to recover corrupt assets of the former regime.The Chair of the Board of Transparency International, Jose Ugaz opened the conference with the following statement,

‘In recent years, Ukrainian authorities have adopted a lot of laws to eradicate corruption. But not one criminal proceeding against Yanukovych and his allies was finalized. And the people are waiting for it, with 86% of Ukrainians considering that authorities do not do enough for corruption fighting in general, and for assets recovery, in particular. There is a simple way to solve this issue, fulfil the promises, given during the Euromaidan’.

The Ukrainian Minister of Justice, Pavlo Petrenko called the recovery of Yanukovych and his allies’ assets one of the main priorities of the ministry. However, he pointed out the necessity of joining efforts of civil society, authorities and international community to get a result.

‘After the collapse of the USSR, our country did not have a chance to become successful simply because of corruption. During the Yanukovych regime, Ukraine lost around 30-40 billion dollars from the state budget. As of today, not a cent has been returned. Asset recovery bills hardly pass through the Parliament as many deputies have their own interests and benefits in preventing this. Laws are adopted due to the civil society. Ukraine will not be able to recover the assets alone. That is why we appreciate the assistance of the international community’.

‘In due time, Switzerland developed the best mechanisms to maintain its economical reputation. We froze doubtful accounts and do a restitution. As our country is a powerful financial hub, we are concerned to the right of property of those who trust us. But reputation is more important for us. The situation with Yanukovych became illustrative. Switzerland was one of the first to respond to Ukraine’s request. We immediately decided to freeze accounts of the former President and his team of around  70 billion dollars. We were not going to deprive these former officials of the property right for such assets, but only froze them, to give some time to Ukrainian authorities to sort out the situation and carry out an investigation. We were not going to deny the ownership of these assets of former officials.. But not much has happened from that time. Switzerland again froze the assets for a year to give one more chance to Ukrainian authorities’.

‘Around 50 criminal proceedings against Yanukovych and his closest allies are in process. However, the Ukrainian power managed to recover only 250,000 hryvnias out of blocked millions during the two years of investigations. It proves that the asset recovery of former corrupt top officials is not a priority for our law enforcement bodies,’ Daryna Kaleniuk commented on the results of the analytical report  of the Anticorruption Action Centre.

Delay in the investigations of the economic crimes by the ‘family’ is a main problem of Ukraine. The average duration of similar processes is, as a rule, not more than seven years. The Yanukovych’s case became a symbol of corruption. The main question of the conference is what to do to finally ‘complete’ the case.

Yevhen Yenin, the Deputy General Prosecutor of Ukraine, explained why the investigation process took so long,

‘There are  weaknesses within the investigation. Different departments of law enforcement bodies were engaged in this case, and none of them knew what the other one did. Different data were sent to international partners. Suspects were turned into witnesses and all the efforts were in vain. We are changing this new system, also with by establishing the anti-corruption institutions. I would like to assure you all that despite the long time taken for assets recovery, it is completely within the average timeframe of five to ten years normally required from such an operation. At the moment the Prosecutor General’s Office of Ukraine is ready to take responsibility for this. In a week we are going to Latvia, the first country that can considerably help return the money of the Ukrainian people. We already have one verdict, others will soon follow’.

However, there is a positive moment in the course of Yanukovych’s case. According to the Executive Director of Transparency International Ukraine, Yaroslav Yurchyshyn, as a consequence of  this case, institutional changes in the corrupt asset recovery system began. A number of laws were adopted to seek and recover assets, the procedure of establishment from the National Agency for Identification, Tracing and Management of Assets Derived from Corruption and other Crimes has been launched, and the leader has been elected. ‘If a similar situation occurs in the future, such an institution will be able to access data from a similar European institute’, stated Yurchyshyn.

More than thirty international experts from different countries and influential international organizations, such as the FBI, representatives of the International Monetary Fund etc. are taking part in the conference. Participants will get and share experience in identification, arrest of illegal assets and their owners, and investigation of crimes on illegal enrichment.