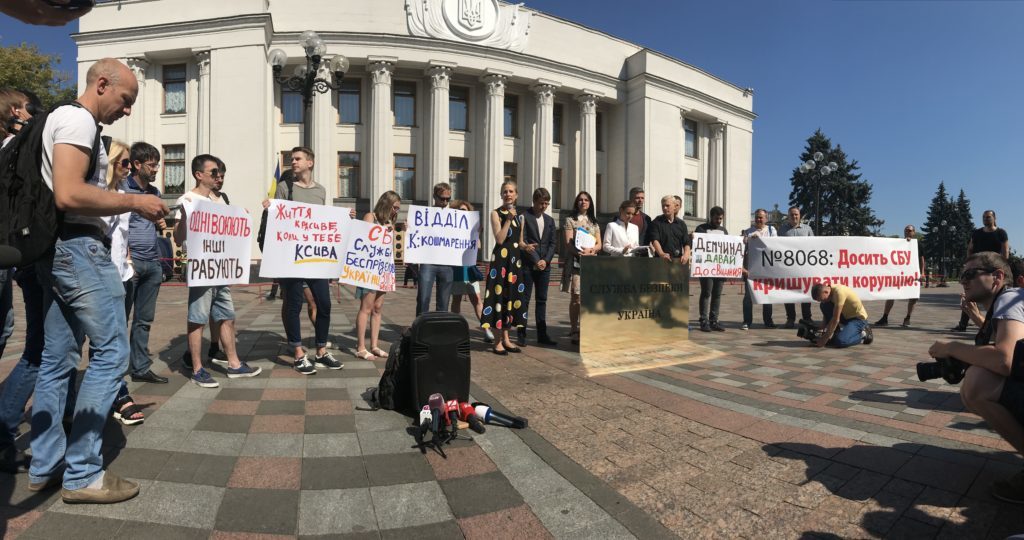 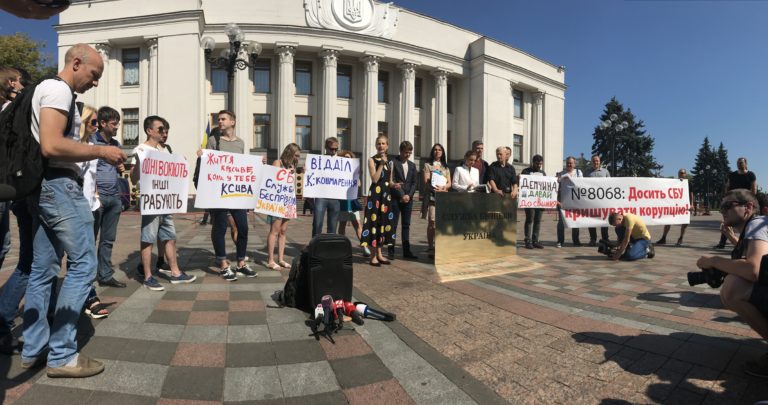 The activists installed a golden three-metre “SBU” ID card in front of the parliament building. This was their way to demand that the MPs vote for amendments to the draft law no. 8068 “On National Security of Ukraine” envisaging stripping the SBU of the functions in the field of economy and fighting against corruption, which are uncharacteristic to the special service. 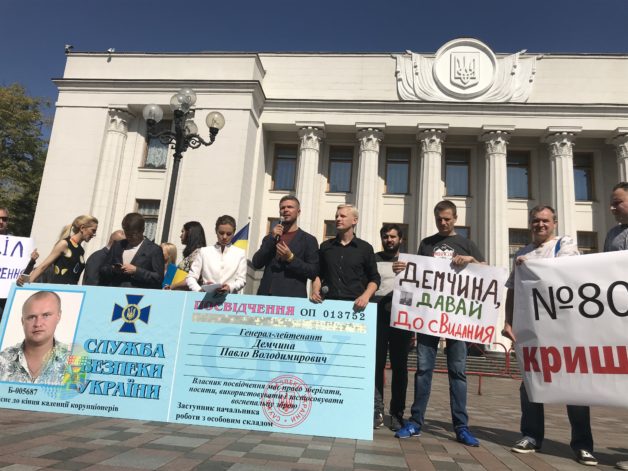 In case the proposed amendments are passed, the SBU loses functions of counter-intelligence and investigative activities in the field of economy and corruption counteraction. These functions are redundant for the SSU. The Security Service is deprived of the right to investigate corruption-related and economic crimes, whereas the authorized agencies have their own operative officers and they do not need the SBU’s assistance anymore.

“The SBU officers working in the so–called departments of ‘economy’ and ‘anti–corruption’ — they are the ones whom the business foremost accuses of raiding and racketeering,” claims Vitaliy Shabunin, Head of the Board of Anti-corruption Action Center. “This is why the SBU must be stripped of these functions and the respective departments should be dissolved. Instead, the officers and divisions protecting our sovereignty and fighting with Russian mercenaries are to be strengthened”. 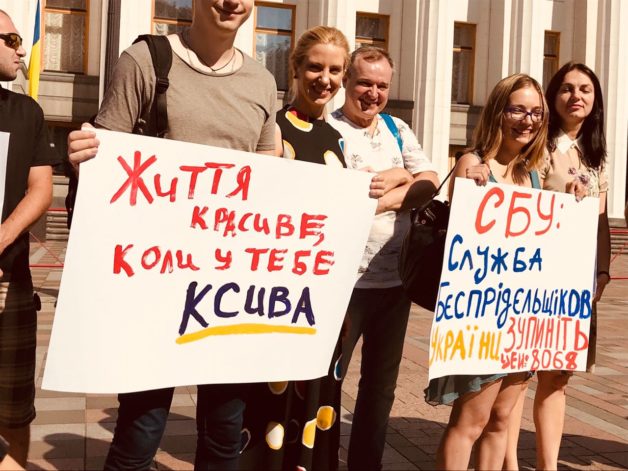 It is worth mentioning that the SBU has excessive staff, it is the largest security service in Europe. Belarus holds the second place with its Soviet-style KGB, the United Kingdom is the third. The legislation stipulates for 31 thousand officers serving in the SBU, meanwhile total number of personnel of all secret service of the UK (including the Secret Intelligence Service (MI6) and the Security Service (MI5)) is about 11 thousand people.

Altogether, there were 427 amendments proposed to the Presidential draft law No. 8068, the Verkhovna Rada Committee rejected 311 of them. It is important, that Serhii Pashynskyi, Head of the Committee on National Security and Defense, refused to consider amendments relating to the SBU. 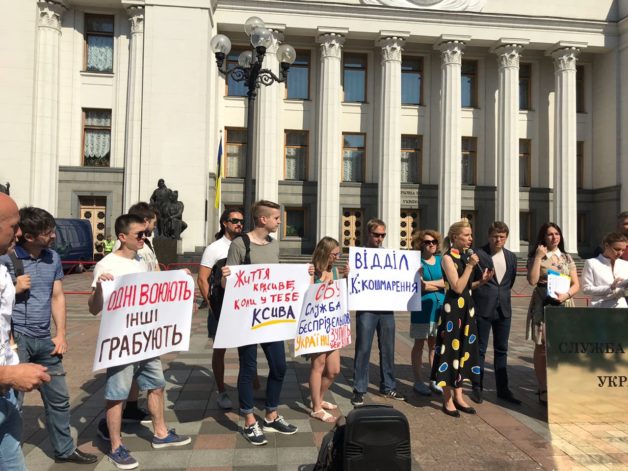 “I will demand to put the amendments stripping the SBU of uncharacteristic functions to the vote in the session hall,” stated MP Hanna Hopko. “And I call every MP and every head of the faction that want to end the corruption and illegal interference in business by the SBU – to vote for these amendments. Their voting is to show whether they are eager to turn on the green light for business in Ukraine, or keep contributing to corruption and impunity flourishing.”

Let us remind you that the recent survey by the business-ombudsman in Ukraine showed almost twofold increase of complaints against the SBU filed by the business (compared to 2016). 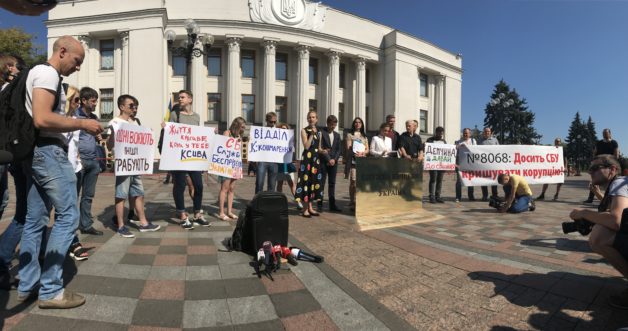 Other participants of the action also stressed on abuse of office by the SBU officers.  “We see that upon finding corruption, the SBU officers often start negotiating with the prospective criminal case subjects about non-disclosing the facts to investigation and covering everything up,” said Kateryna Butko of Automaidan. “A striking example is recent arrest of the SBU officer that demanded three thousand USD from every individual with forged papers for residence permit in Ukraine”.

According to the official report by the Security Service of Ukraine on the number of cases filed to the court, 1 out of 4 criminal proceedings investigated by the SBU does not fall under their jurisdiction.

Out of 889 cases filed to the court, about 200 should have been investigated by a different law enforcement body. Meanwhile, the 2016, the 3rd year of the war, 0 cases of espionage (Article 114 of the Criminal Code of Ukraine) were filed to the court by the SBU. 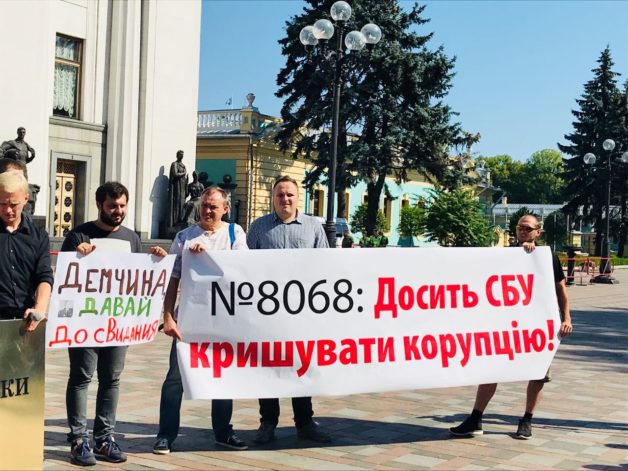 “We must fix the situation in which the functions of different law enforcement agencies overlap. If we speak of economic crimes, they must be handled by the National Service of Financial Investigations, which the authorities keep promising to create but fail to do so in place of the abolished Tax Police. If we speak about corruption-related crimes, this is why the NABU exists,” said Yaroslav Yurchyshyn, Executive Director of TI Ukraine. “Clear distribution of obligations is a way to efficient use of limited budget funding. Besides, this way we avoid unnecessary interagency fighting for influence areas.”

It is worth noting that the SBU is the only public body which, in violation of the law, allowed its employees not to submit their electronic declarations to the unified register – notwithstanding the fact that journalists discovered that SBU employees lead a luxurious lifestyle which can hardly be explained by their legal income.