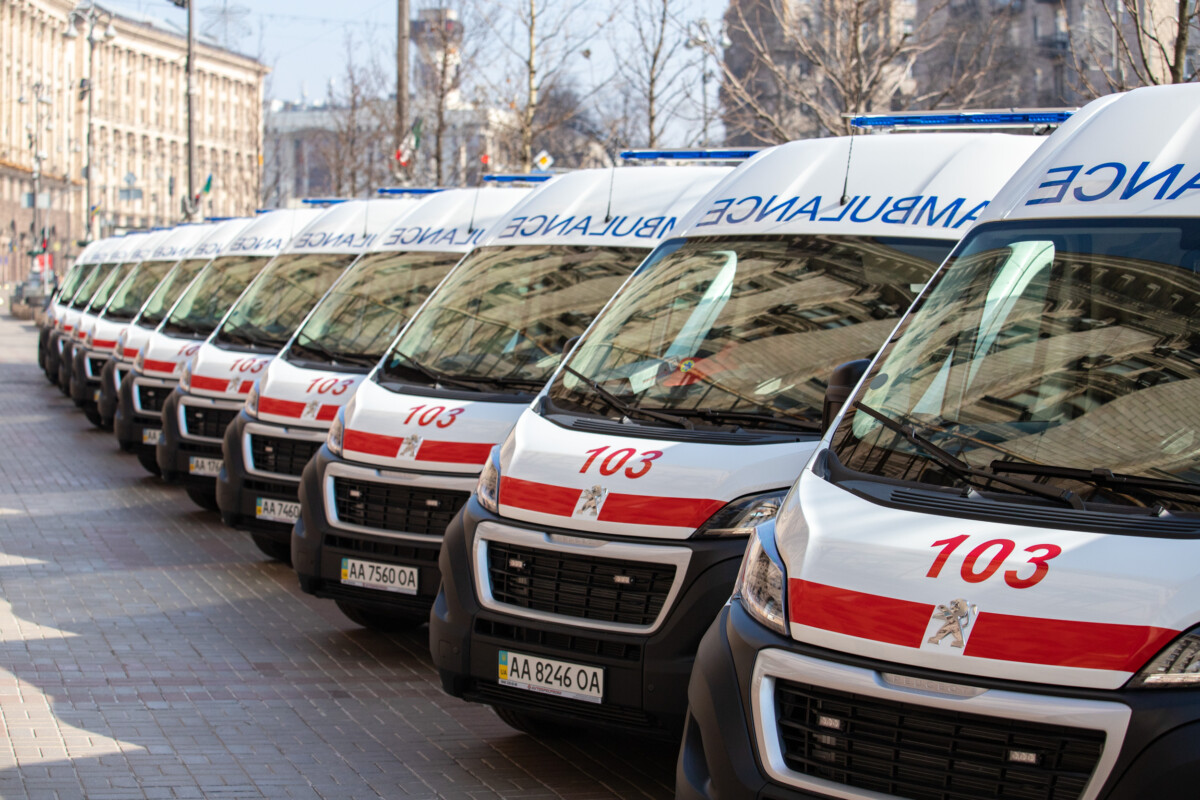 How long should it take for an ambulance to arrive after your call? According to the current resolution of the Cabinet of Ministers, it should be 10-20 minutes, depending on where you live: in the city or in the village. However, according to the minister of healthcare, this standard is only met in about 30% of cases. There are many reasons for ambulance delays: calls are not prioritized, patients’ routes are built incorrectly and the network of emergency medical care centers (EMCC) is not ideal, car fleets are long outdated and there are simply not enough cars.

Ukraine’s 2020 national budget included UAH 0.9 in subventions to update the ambulance car fleet in the regions. Initially, they were to be purchased locally. However, in August 2020, within the budget program “Development of the emergency medical care system”, the designated recipient of budget funds was the state enterprise “Medical Procurement of Ukraine”, which belongs to the Ministry of Health.

At the same time, in March, the procurement of a number of goods, works and services required to combat COVID-19 was allowed to be carried out without taking into account the requirements of the Law of Ukraine “On Public Procurement”. To this end, the Government passed the special Resolution No. 225. The goods, works and services listed therein can be purchased under direct agreements without competitive procedures. Back in April, the purchase of ambulance cars was included in this resolution. Thus, 2020 brought two changes at once: vehicles for EMCC were purchased centrally and not through competitive auctions on Prozorro, but directly, only reporting on the purchase.

What Ambulance Cars Are Purchased

According to the state standards of Ukraine, ambulances are divided into three types:  A, B, C.

Cars of A1 and A2 types are designed to transport patients whose cases are probably not “emergencies.” The difference between the two types is the availability of an additional chair for the medical worker.

The type B car is designed for medical care by a medical (paramedic) team, transportation and monitoring of the patient’s condition at the prehospital stage.

Type C is a resuscitation vehicle that is needed to transport patients in serious or critical conditions.

This year, ambulance cars of types B and C were purchased.

Officially, Minister of Healthcare Maksym Stepanov announced the plans to purchase ambulance cars in the summer. Then, the Ministry decided to purchase 400 cars by the end of 2020. The procurement was entrusted to SE Medical Procurement of Ukraine, which had recently been granted the status of a central procurement organization.

First of all, according to Nashi Hroshi, the enterprise defended non-discriminatory technical requirements, allowing more suppliers to participate in the procurement. Initially, the expert state institution “Polytechmed” tried to include high engine power in the requirements. This condition would effectively narrow down the circle of potential participants to one company, Autospetsprom, which is already the main supplier of ambulance cars to the state. Luckily, Medical Procurement of Ukraine managed to prove that this requirement was not mandatory.

In addition, SE Medical Procurement of Ukraine decided to carry out market analysis first before entering into direct agreements. It did it as openly as possible, with the help of Prozorro.  At the end of October, Medical Procurement of Ukraine announced 4 competitive tenders. They planned to buy two types of ambulance cars (types B and C) with all-wheel and front-wheel drive. Any bidder who could deliver ambulances in accordance with the specified requirements could submit his proposal. However, there were also complaints from the market.

A potential participant in the procurement of TOV BRIORSON MOTORS complained to the procuring entity about the discriminatory requirements of the technical part regarding the front-wheel drive of the car. The company wanted to offer “cars on a cost-effective offer that meet all national standards and are certified, but have a rear axle drive.” However, the complaint was not satisfied. As a result, TOV BRIORSON MOTORS did not participate in the procurement. The procuring entity probably decided to buy specifically ambulance cars with front-wheel drive because this type of cars has better off-road performance, especially in winter, on slippery or snowy roads. And this is important for ambulances, which should be able to drive anywhere in any weather conditions.

Another bidder, TOV VIDI UNICOMMERCE, complained to the procuring entity that “the expected cost of all-wheel drive ambulances is incorrectly formed and abnormally low. And the delivery deadline, November 4, 2020—December 31, 2020, is obviously impossible given the declared quantity of goods.” The procuring entity declined this complaint as well. Despite this, TOV VIDI UNICOMMERCE participated in the procurement, and in one tender, it even proposed the lowest price, reducing its initial proposal by UAH 181,000. However, no agreements were concluded with this company. After analyzing the market, participants continued to reduce prices, and finally another company gave the best offer. 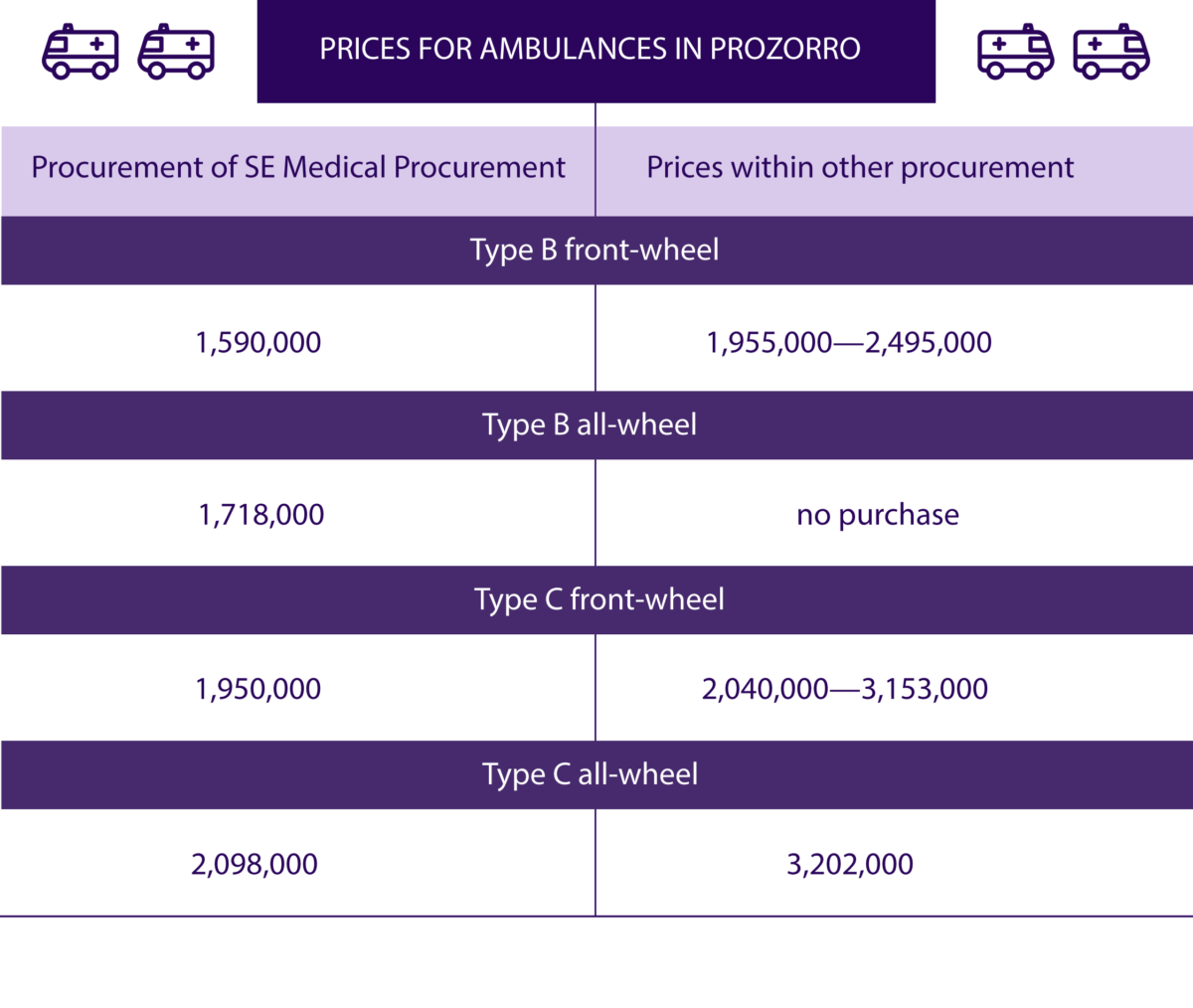 4 to 6 companies participated in the tenders used by Medical Procurement of Ukraine to analyze the market.

At the end of December 2020, the State Enterprise “Medical Procurement” published 5 contracts for the purchase of ambulances on Prozorro.

The two largest contracts went to TOV Autospetsprom, the company which supplied the largest number of ambulance cars to the state throughout the entire existence of Prozorro. We estimate that in the last four years, the enterprise sold 1,152 ambulance cars to the state for a total amount of over UAH 2.3 billion. As part of these tenders, it will also supply 104 type C ambulances with front-wheel drive and 142 type B ambulances with front-wheel drive.

In addition to Avtospetsprom, 2 contracts were awarded to TOV Spets-Kom-Service: 75 all-wheel drive cars type B and 39 all-wheel drive type C. Another 56 type B ambulance cars will be supplied by TOV ADAMANT MOTORS ZAPORIZHZHIA.

With the help of preliminary market analysis in Prozorro, Medical Procurement of Ukraine managed to save over UAH 120 million while buying 416 ambulance cars. The final contract prices were much lower not only than the expected cost of procurement (which is the baseline used to calculate the savings) but also than the final prices proposed by suppliers as part of auctions announced for market analysis.

It is currently unknown how these ambulance cars will be distributed among the regions. Daria Pakhomova, a point of contact at the state enterprise, said on the phone that “the distribution of vehicles is not within the purview of the state enterprise and will be carried out by the Ministry of Healthcare of Ukraine.” We hope the cars will be supplied in time, and the distribution and quality will be satisfactory.

Who Else Purchased Ambulances

Despite large-scale centralized procurement, procuring entities on the ground decided to replenish their fleets of ambulances as well. They were purchased by executive committees of city or rayon councils, and mostly by emergency medical care centers (EMCC). We estimate that in total, 836 ambulances for UAH 1.6 billion were purchased in 2020. This is more than the total number for the past four years—748.

As for oblast distribution, the biggest quantities of ambulances in 2020 were purchased in Khmelnytskyi (36), Zakarpattia and Kyiv (35 each), and Lviv (31) oblasts. The fewest—in Vinnytsia (1) and Luhansk (6) oblasts. None were bought in Kirovohrad, Odesa, Poltava and Donetsk oblasts. 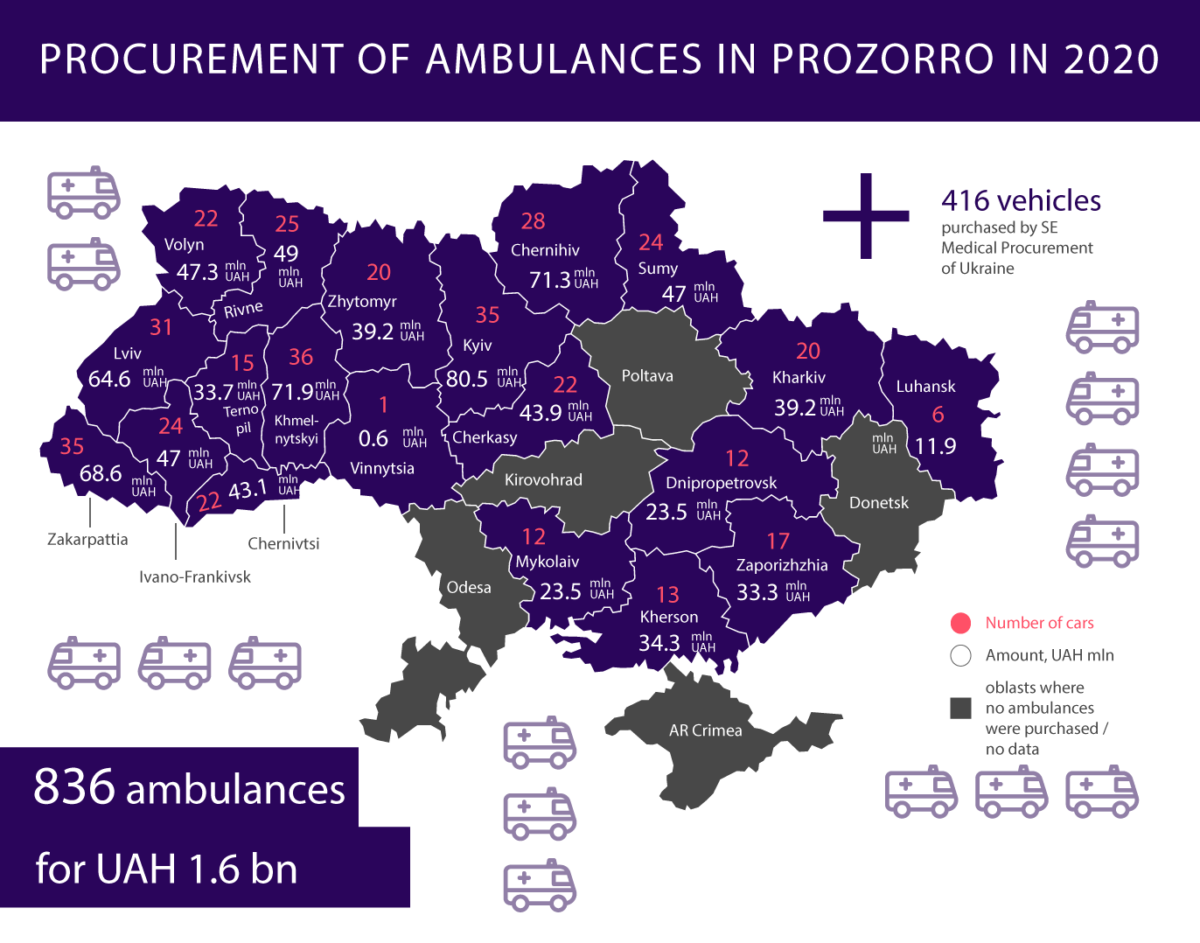 Who Bought Ambulances the Cheapest

Not surprisingly, the cheapest ambulances were purchased by the State Enterprise “Medical Procurement of Ukraine.”  They saved over UAH 300,000 on one type B front-wheel drive ambulance, and over UAH 600 — on a type C ambulance. Of course, the price may be affected by the number of purchased vehicles and equipment installed therein, but the fact remains that competition pays off. The prices achieved by the State Enterprise “Medical Procurement” are pleasantly surprising in comparison with the prices offered by the same participants in separate tenders.

In total, Medical Procurement of Ukraine managed to save over UAH 120 million on the purchase of ambulances.  Non-competitive procedures almost always lead to overpayment. For this reason, we are not sure why it would make sense to allow procuring ambulances without auctions. This practice needs to be done away with, returning to competitive procurement.

The state budget for 2021 includes UAH 1 billion for the purchase of 438 ambulance cars. The experience of the state enterprise shows that these funds can be spent reasonably and under clear, understandable rules. We hope that the Ministry of Healthcare and the participants will draw the right conclusions.

By the way, we believe that the list of goods, works and services that can be purchased under the COVID-19 procedure is long overdue for a review to exclude items the purchase of which can be safely planned. So far, this list has only been expanded.

The material was prepared in collaboration with public procurement specialist Yaroslav Pylypenko and analyst Oksana Dziavornyk with the support of UK Aid and the UK Government.