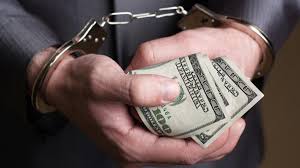 Corruption Is Addictive. Don’t Even Start

We live in a world where corruption is an undeniable evil, but it is not punished all that much.

People want to live in dignity and prosperity. But they tend to take opportunities to find loopholes in laws and achieve what they want more easily if they see them. I’m not just talking about politicians or wealthy business people — I am talking about many of us.

Today, on the International Anti-Corruption Day, let’s try to figure out how Ukrainians live in this paradox.

According to last year’s surveys, 38% of Ukrainians believe corruption to be part of the Ukrainian mentality. That is, bribing somebody or taking bribes is not a crime as much as it is just in the nature of our people. Quite a convenient worldview, isn’t it?

I’ll leave it to sociologists to say whether this view is still relevant in 2019, since we haven’t seen this year’s numbers yet. But, unfortunately, we can hardly expect a global shift in this outlook of our compatriots, despite the numerous anti-corruption laws that have been passed.

We are too used to the old ways. We don’t always realize that a different way might make more sense.

Let’s take customs taxes, for one. Moving goods across the border, a Ukrainian should pay about 40% of its value. But this hypothetical Ukrainian doesn’t want to give that much money to the government. So they work around this (for instance, declare a much lower price) to pay 10% instead of 40%, let’s say.

But this smart guy or gal doesn’t understand that this difference, this hypothetical 30%, is what is underpaid to the national budget, which would eventually go to their kids or retired parents. And when that person goes somewhere by car on broken Ukrainian roads, it will hardly cost them much less to have the car fixed after what it’s going to endure.

Basically, this person steals from himself or herself.

Why does that happen? Because people often don’t understand how funds from the taxes that they pay themselves are distributed. The system cannot always prioritize what you need right now. They start looking for easier ways and workarounds which eventually lead nowhere.

It is very hard to fight it, since tens of thousands of people saw the first examples of bribes back in school.

What kind of world did we all grow up in? A parent took their child to school and had to pay a certain “fee” if they wanted this school to be a better one. Then they had to buy textbooks. This already demonstrated that the government could not ensure the declared free secondary education. Then there were constant fees for repair works in school, some of them of rather questionable necessity. Are we surprised by that? Not really, right?

Higher education is another ordeal. You had to talk to the right people, pay for entrance exams. Now, there’s external testing, even though it’s not as good as it could be. But there are so may people who grew up watching the principle “you scratch my back, I scratch yours” in action.

A college student is 17 years old, and they see everything. They don’t find it critical that problems can be resolved through an envelope with money inside it. Even conscientious students start doubting the need for integrity.

In “adult life,” for instance, in business, you encounter kickbacks and “encouragements” in envelopes or in gifts once again.

And then there are so many graduates and their parents who pay to get employed in public service. There are really weird examples of that. I knew one who gave a bribe to get employed by the police. And then, of course, he felt the need to recover that money. And then it’s a vicious cycle which is almost impossible to quit. If a law enforcement officer starts his career with a corruption crime, what can we expect next? How can we expect that he will fight against corruption otherwise?

Is this a question of mentality? Hardly. Rather, lack of education. If people learned about taxes in schools, about the life cycle of bribes, about alternative ways to resolve things, the picture would be somewhat different. If a ten-year-old boy sees a minister being convicted for bribery on YouTube, he won’t forget it. Maybe, he’ll even want to fight against corruption in the future, or to teach others that bribes are bad.

We have done a lot to create an anti-corruption system in our country. We have done everything so that corruption prevention, punishment for corruption and engagement of citizens work smoothly. The only thing left is changing people. Namely, the characteristics that some justify by referring to mentality.

Corruption is not part of mentality. It’s a habit. A harmful one.

News
More than UAH 6 mln Spent without Tenders on Conference of Ukrainian Ambassadors with President
ProZorro
News
Competition for Executive Director Position
Knowledge Database
Who Investigates and Reviews Corruption
anticorruption_infrastructure
Legal analysis
Tatarov’s Case: None of the “Entourage” Will Be Punished