In autumn of 2014 I got a call from Vitalii Shabunin [chair of Anti-Corruption Action Center] with his usual “Hey, here’s the thing…” which meant I was in for anything but a calm and peaceful life. This time his offer was to look at the website of Transparency International Ukraine and its selection of Board members.

I was not even at the Membership Meeting, but I was elected to the Board together with Andrii Maleshevych, Juhani Grossmann, Tymur Bondariev and Andrii Marusov. My experience with management, in business, politics and civil society organizations probably showed TI members that I could be useful.

I was not new to the subject of anti-corruption. Before that, I worked with Lesia Orobets to defend the final school testing from [then-minister of education] Tabachnyk, with Dmytro Sherembei and Patients of Ukraine to reduce corruption in medication procurement etc. All of this happened in the times of the infamous Yanukovych, when anti-corruption struggle was not as popular as it is now. After the Revolution of Dignity it would be a shame to stay on the sidelines, so it started: TI Board, the anti-corruption group of the Reanimation Package of Reforms, the first convocation of the Public Control Council of the NABU, NACP, SAPO and ARMA personnel commissions.

So when I was offered to participate in the competition for the position of TI Ukraine’s executive director in spring of 2016, I didn’t hesitate as much as I had when I was elected to the Board. With RPR, I had already created the advocacy department, systematized the results; there were several strong candidates for this position. But I saw great potential and a need for a strong anti-corruption organization, more activist than, say, Center for Policy and Legal Reform but more balanced than Anti-Corruption Action Center. My colleagues from the aforementioned organizations supported this idea.

According to the information I have, I had 172 rivals for the position, including strong competitors like Artem Romaniukov and Olesia Arkhypska. But the Board of TI (which at that point also included Vitalii Kasko) selected me. 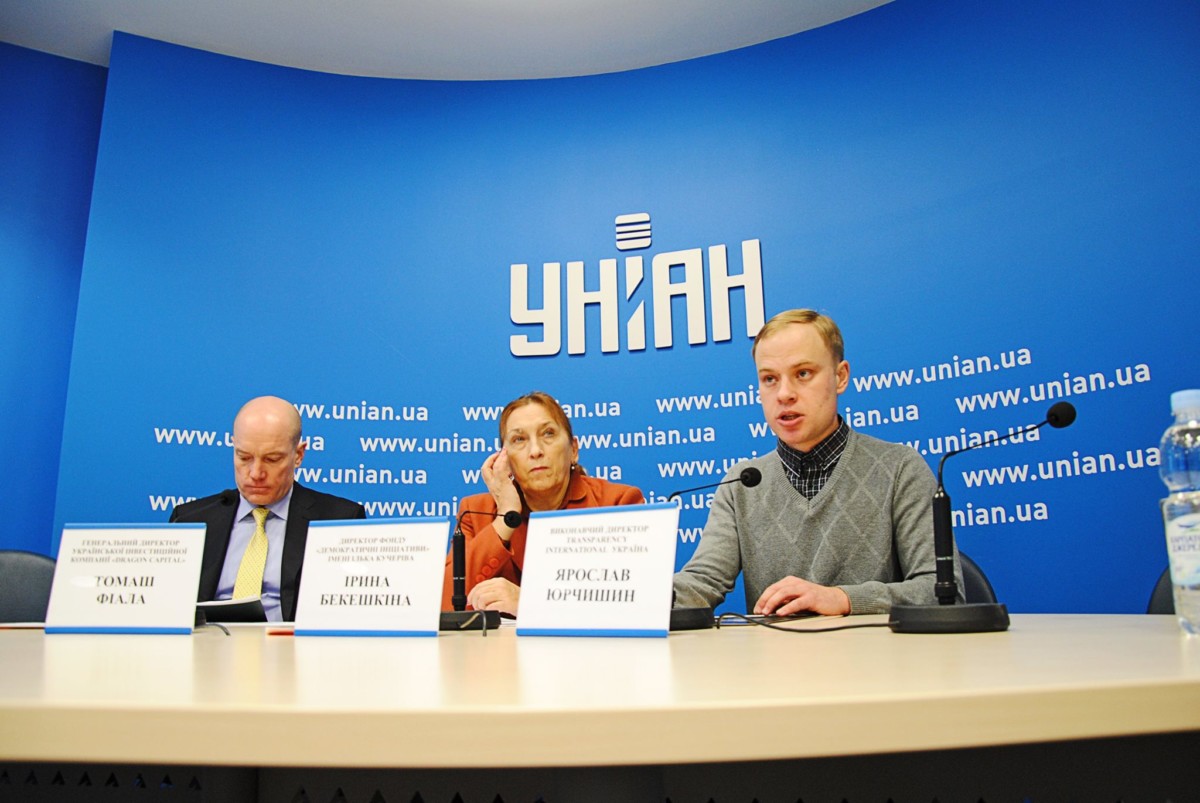 I saw great potential and a need for a strong anti-corruption organization, more activist than, say, Center for Policy and Legal Reform but more balanced than Anti-Corruption Action Center.

The Tasks I Was Given

My personal challenge was to improve my English so I could communicate with our international partners. Challenge accepted, as they say. 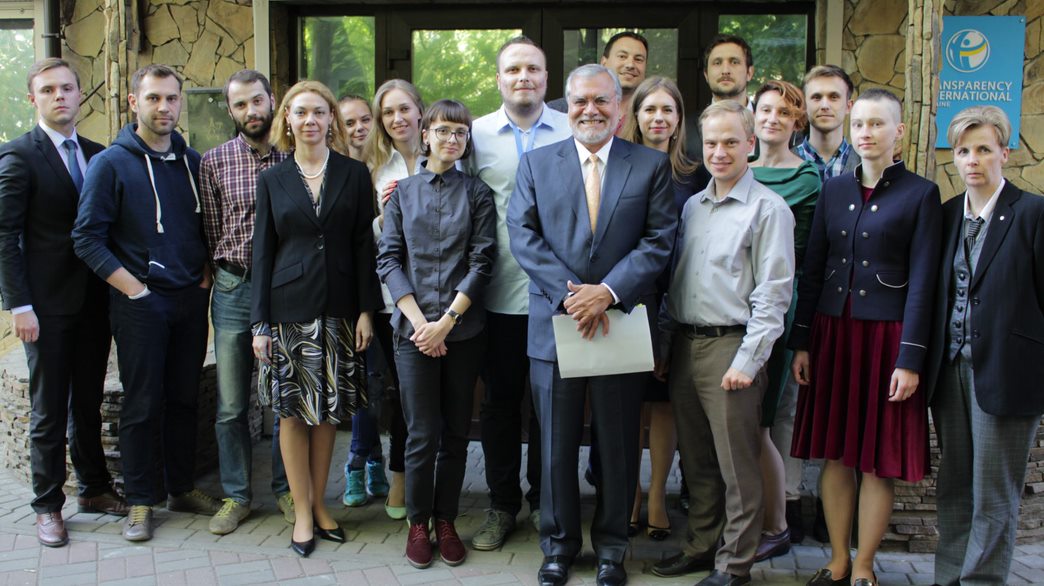 Tasks at the beginning of my work: move the office to Kyiv, make the brand more recognizable, ensure institutional and financial stability.

When I started working with TI Ukraine, we had a well-budgeted focus area of Innovation Projects, but we did not have funds for organizational development. So I am very thankful to UNDP Ukraine and everyone involved. To receive this support, we had to organize the finances, the organizational development, policies, develop the organization’s strategy and the plan of its implementation, the annual budget and many other things. But it gave us the necessary impetus…

Looking back, I can name the following achievements of these two years:

— help with the launch and constant upgrade and monitoring of ProZorro. Not only does this system save money (according to Maksym Nefiodov, over UAH 50 billion), but it has also become the trademark of Ukrainian reforms worldwide. Moldova’s mTender was written and set up based on our principles (frankly speaking, the very same people that worked on our ProZorro); 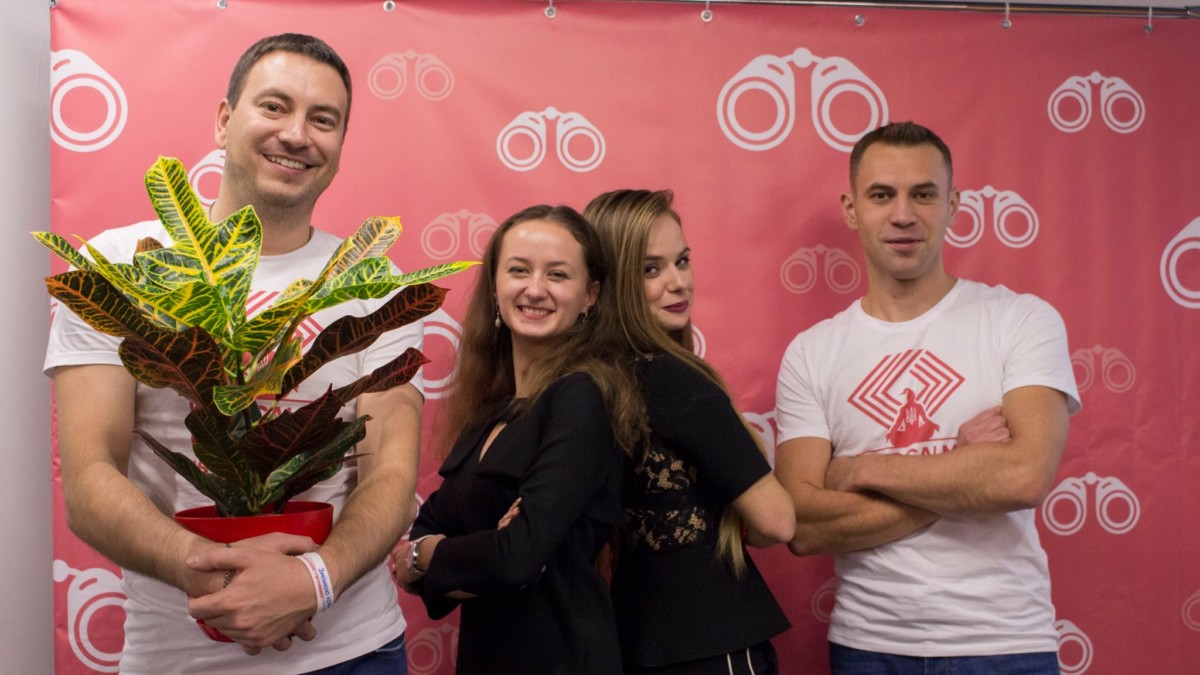 — help with the launch and support of ProZorro.Sale, a system of electronic auctions first for the Deposit Guarantee Fund, and later for other public property. As of now, property has been sold for UAH 12 bn. Which means returned funds or the possibility to return property to clients of bankrupt banks transparently, or the opportunity for the local and national authorities to get rid of useless assets through a win-win scheme.

— increasing transparency of 100 biggest Ukrainian cities. Last year, there were just 6 cities which complied with 50% or more transparency requirements, with the highest score being Lviv’s 59.7 – now, we have 17 such cities, with the highest scores being Drohobych with 86.9 and Mariupol with 81.1 points. Some fun facts: public information sector in Drohobych reduced their paper expenditures by 60% (now everything is available on the website) and two investment projects have been launched in the city. There is also an interesting situation in Dnipro, where the ranking facilitated understanding between the authorities and activists.

— help with the launch of the medical reform through development of #eHealth, with the project office headed by Yurii Bugai. Now, it is a full-scale state-owned enterprise, Electronic Health, which makes it another example like ProZorro: a full cycle of policy implementation – identification of a problem – development, testing, implementation – quality monitoring.

— an advocacy campaign on the creation of NABU, electronic declarations, SAPO, ARMA, the High Anti-Corruption Court. Ukraine is the leader on beneficiary owners, open governance etc. We have played a part in this.

— we have  indirectly contributed to Ukraie’s progress in Corruption Perception Index: +3 points between 2015 and 2017. Too little? Perhaps, but that’s still some progress. We keep growing, which means the influence of corruption keeps reducing. I hope the tendency will continue this year as well.

I have a lot of faith in TI Ukraine’s team. Not only can they cope without me, they are already doing great things without me. Everything that I did (representation, partnerships, high-level advocacy) I will be able to do as a Board member, if TI members so choose. Besides, we scouts have a rule: if this thing can live without you, and you feel that you have given it all you could, let it go. When we start working on a certain position, we immediately start looking for somebody to follow us, maybe even more than one person. So in this context, everything is great. It all depends on the members of TI, whether they will want to develop the structure or fight among themselves.

Secondly, I am a somewhat accidental person in anti-corruption. I do not enjoy uncovering some dirty schemes – I actually feel hurt when I see the situation of people who, living in a country at war, in a difficult economic situation, find excuses for practicing an actual crime against others. They are no better than Putin they use as an excuse. However, I am not anyone’s judge, I would rather create conditions where corruption cannot exist and people are not tempted to use it. This has actually been what TI did during my term of office. Unfortunately, if punishment is not ensured, we cannot only appeal to people’s conscience. And those who have to ensure that the punishment is unavoidable either participate in those schemes or are surrounded on all sides and have to do crazy brave (sometimes just crazy) things just to perform their functions.

So, unless we change the political culture, the effect from anti-corruption and implementation of reforms in other sectors will be relative. It may be growing, but it still won’t meet social expectations. Changing the culture will take years, and the key element of its implementation is new policies. With the values of service and the ambition to get things done rather than be liked, with readiness to be number 101 on the list of a team with a clear action plan, not necessarily in top five.

We scouts have a rule: if this thing can live without you, and you feel that you have given it all you could, let it go.