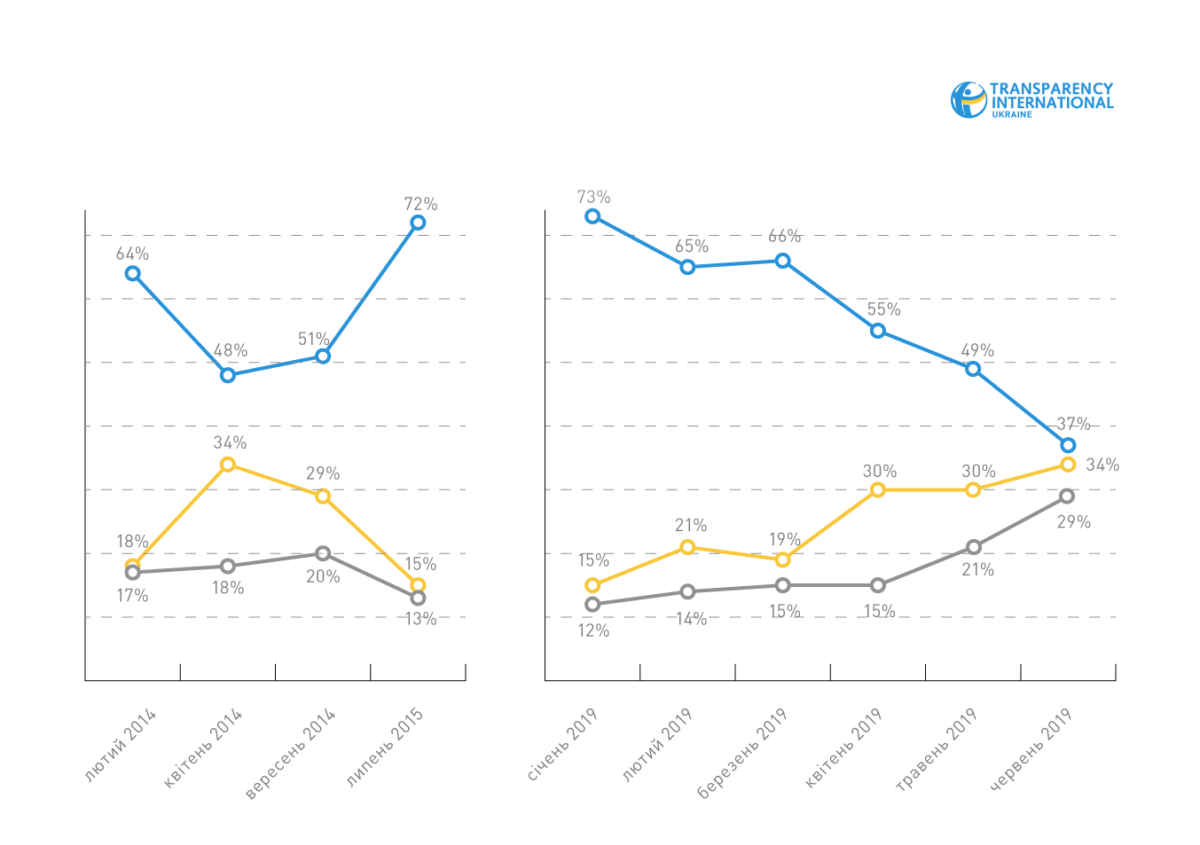 Ukrainians on Courts: We Don’t Know Them but Don’t Trust Them

“Let the people decide who is to become the judge,” says one of the MP candidates.

Hmm. What an interesting idea, say we. In such a case the judges will be appointed by those for whom the main source of information, trust or mistrust towards judges comes from the media and friends’ or acquaintances’ opinions.

What do the Ukrainian people think about courts?

The opinion poll carried out by Razumkov Centre Sociological Service together with Ilko Kucheriv Democratic Initiatives Foundation on behalf of the Center of Policy and Legal Reform with the EU sponsorship within the “Strengthening the Role of Civil Society in Facilitating Democratic Reforms and Increasing Accountability, Responsibility, and Quality of Government” project provides a valuable insight into the question.

Have the Ukrainians had the first-hand experience of how the judicial system works? – No (66% don’t have any experience, against 9% of those with personal experience and 25% acquaintance’s experience).

Do the Ukrainians trust the courts? – Definitely not (75% don’t trust against 14% of those who do).

All right then, what does influence the Ukrainians’ level of trust in courts, provided that only one in three Ukrainians had first or second-hand experience with the courts while as many as two in three have no trust in the system?

Evidently, 25% are predominantly influenced by the media, i.e. journalists’ and bloggers’ publications. Additionally, 20% are judging by their relatives’ and friends’ experience, and the judges’ verdicts have an impact on 18%. The information on such court rulings, however, still comes from the media.

What is the people’s take on solving the issues with the courts? What could, in their opinion, increase the level of trust to the courts?

First and foremost, it could be achieved by holding the corrupt judges criminally accountable (63%) and ridding the judiciary of the unscrupulous judges (63%). Consequently, it raises the issue of who is to evaluate the degree of unethical conduct and accountability efficacy and determine the just punishment, etc. And for 37% the level of trust will increase if the system eliminates the mutual cover-ups and implements immediate response of the relevant authorities to the judges’ misconduct. How the citizens will get to know about it and how they will be evaluating the “promptness” of the said response remains the question.

In line with the modern political trend of “starting with a clean slate”, almost half of the Ukrainians (43,5%) think the judicial reform should be started from scratch. 23% respond that the country should see through the implementation of the current reform and 25% are unable to meaningfully evaluate the current developments in the judicial reform process.

Approximately 13% of the Ukrainians have a positive response to the results achieved by the reform while 60% have a negative one. Nearly 12% saw the isolated instances of positive changes in the judges’ moral conduct and independent status of the judiciary.

40% of the citizens support the establishment of the High Anti-Corruption Court of Ukraine which recently saw the appointment of its judges and which is expected to be launched on September 5, while 12% do not back it. The rest either don’t know or don’t understand its objectives and purpose behind its creation. The same results are observed in the question of the support for the High Court on Intellectual Property.

How to make sense out of it all?

Finally, one should remember that the sentiments reflected in the poll mirror the Ukrainians’ ambiance. In our previous articles, we mentioned the currently observed increase in criticism of the former governments and the wave of unfounded optimism in the society. However, such peaks of optimism wane afterward.

What is the people’s take on solving the issues with the courts? What could, in their opinion, increase the level of trust to the courts?

First and foremost, it could be achieved by holding the corrupt judges criminally accountable (63%) and ridding the judiciary of the unscrupulous judges (63%).