When Will the NACP Verify Judges’ Declarations?

In October 2020, the foundations of the anti-corruption reform in Ukraine were virtually destroyed. Moreover, it was judges of the Constitutional Court who issued that scandalous decision supposedly in the name of “independence of the judiciary.”

Criminal, administrative, civil, and disciplinary liability for corruption and intentional failure to submit a declaration or lies in it was declared inconsistent with the Ukrainian Constitution. The Criminal Code article which provided for imprisonment of up to 2 years no longer existed. A significant part of the NACP’s powers were lost.

There came a time of deep shock and misunderstanding of how to reorganize everything comprehensively and quickly and restore what had been achieved over the years.

After the Constitutional Court’s scandalous decision, it became necessary to restore the anti-corruption infrastructure as soon as possible. In December, the Verkhovna Rada has restored the NACP powers on corruption prevention and verification of officials’ declarations. We have approved this decision.

The adopted amendments fully consider the decisions of the Constitutional Court and the opinion of the Venice Commission. They established additional peculiarities of financial control regarding judges of ordinary courts and the CCU without restricting the independence of the NACP or the judiciary. We have discussed other advantages of the Law in our legal analysis. 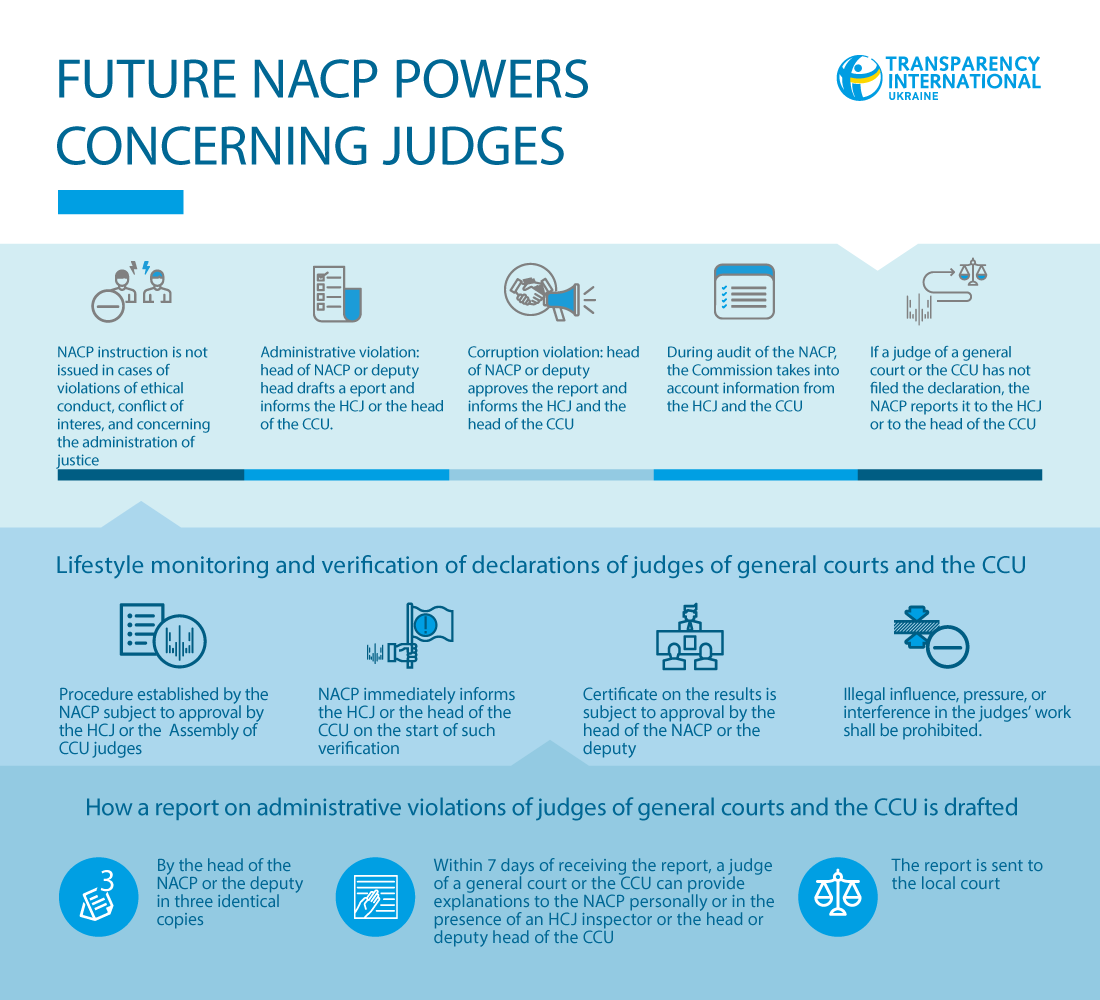 The draft law also established additional peculiarities of lifestyle monitoring and full verification of declarations filed by judges of ordinary courts and the Constitutional Court.

The final and transitional provisions of the Law state that:

Within a month (starting from December 30), the NACP develops draft procedures for verifying declarations and monitoring the lifestyle of judges of ordinary courts and the CCU and submits them for approval to the HCJ or the Meeting of CCU Judges. They have a month to approve them. If there is no approval, the NACP verifies the declarations and monitors the lifestyle of judges of general courts and the CCU under the procedure established by the Law.

The NACP complied with the Law and developed relevant projects within a certain period. The High Council of Justice and the Constitutional Court confirmed the receipt of these documents and started the “approval procedure.”

It is worth mentioning that none of the projects could provide for the establishment of those additional peculiarities that the Law does not provide. However, later both agencies refused to approve these projects (CCU — February 23, HCJ — March 1). Simultaneously, the High Council of Justice noted that “under the anti-corruption legislation, the HCJ must approve the drafts.” Here I would like to disagree.

In what way will declarations of judges of ordinary courts and the CCU be verified?

Anyway, verification will take place anyway, but under the general procedure and with the peculiarities established by the Law. The idea of the HCJ regarding the mandatory approval of procedures was a mistake.

The provision of the Law on “lack of relevant approval” should be understood as a non-receipt of response and the refusal of such approval. Moreover, even if the High Council of Justice or the Constitutional Court approves these draft documents later, this will not change the situation. The point is that the deadline for such approval established by the Law will be over.

Therefore, the NACP can start verifying the declarations of judges of ordinary courts and the CCU when the next wave of filing annual declarations ends (after April 1).

It would be a mistake to say that the High Council of Justice or the Constitutional Court blocked the procedure. Judges of ordinary courts and the CCU are no exception in this regard, and they are subject to the anti-corruption legislation. And soon, we will be able to see the results of the NACP’s activity. It will be interesting to find out.