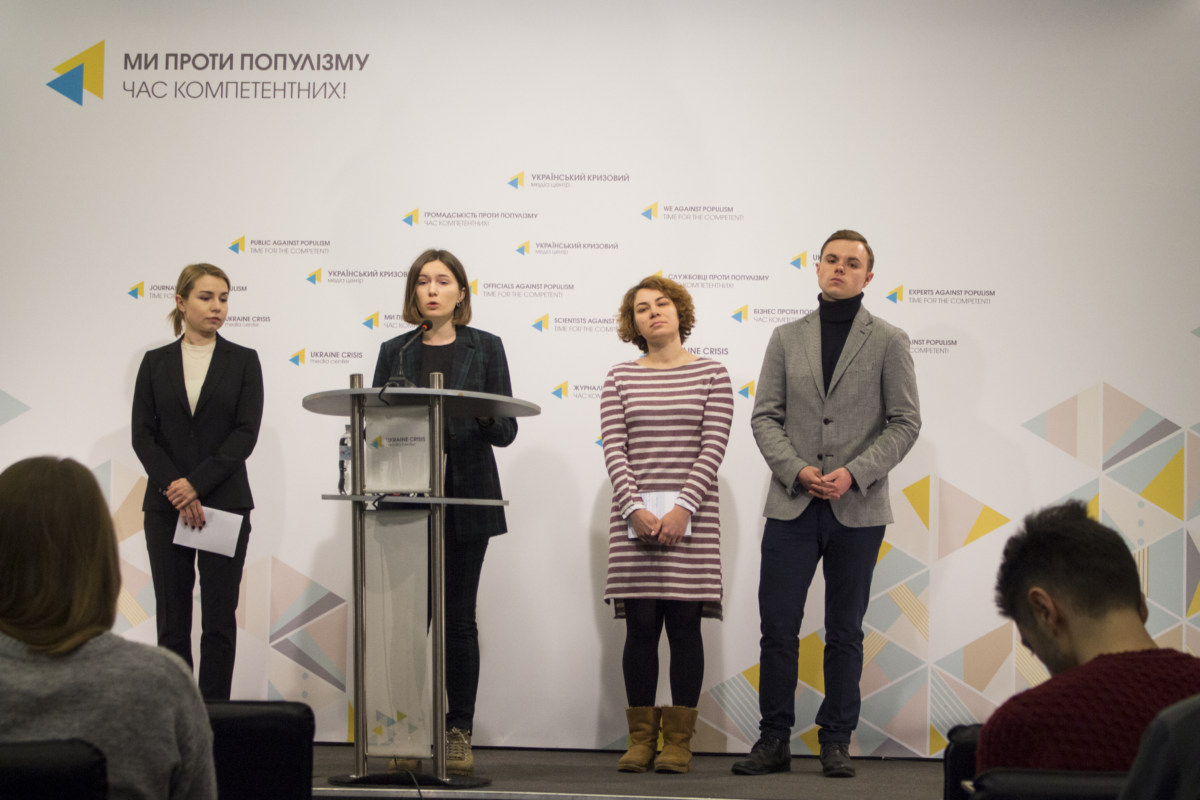 Civil society organizations Anti-Corruption Action Center, DEJURE Foundation, AutoMaidan and Transparency International Ukraine have presented the list of candidates who are not consistent with the positions of the High Anti-Corruption Court judges.

The anti-corruption organizations have analyzed the property, business and political ties of the candidates and their families as well as their history of court decisions.

Overall, the list of questionable candidates includes 55 people – out of the 113 who have successfully passed the written test to the High Anti-Corruption Court.

“Politicians resisted the anti-corruption court for 2.5 years, and now that the competition is underway, the authorities still attempt to appoint judges loyal to them. Not only can they play the card of judges who have already proven their loyalty to the system, but they can also use ‘dark horses,” says Anti-Corruption Action Center expert Anastasia Krasnosilska. “That is why we believe that no candidates with questionable integrity or political ties can be appointed to the anti-corruption court.”

The majority of issues came up in the context of the candidates’ declarations, namely, property registered as owned by their family. Analysts have also pointed out the history of court decisions made by some applicants and their unethical behavior.

For instance, among the candidates, there is Shevchenkivskyi District Court judge Oksana Holub, who participated in the so-called “Maidan trials” – she deprived activists of their driving licenses.

Another participant of the competition is Ternopil Administrative Court judge Inna Bilous, who made decisions against Revolution of Dignity activists. On 10 December 2013, the judge panel including Ms. Bilous fully granted the administrative lawsuit of Ternopil State Administration on partial restriction of the right to peaceful assembly for political parties and an unlimited number of third persons in terms of the location of such assembly from 10 December 2013 until 7 January 2014.

“Maidan judges are the most remarkable example of a situation when judges obediently, blatantly made the decisions ‘sent’ to them ‘from above.’ It would be unacceptable if grand corruption cases were reviewed by Maidan judges, who convicted Revolution of Dignity activists illegally or acquitted judges making such decisions,” emphasizes Kateryna Butko, representative of Ukrainian Union AutoMaidan.

Prosecution of Maidan activists is not the only kind of controversial decisions made by certain candidates to the anti-corruption court.

For instance, the list includes judge of Shevchenkivskyi District Court in Kyiv Yevhen Martynov, who helped an individual to obtain 16ha of land near Kyiv illegally when he worked in Boryspil District Court. However, he managed to avoid punishment.

One of the common violations committed by the candidates is concealment of their own income or untruthful information in electronic asset declarations.

One such example is lawyer Vasyl Postulha, who is allegedly guilty of concealing his income. According to his 2017 declaration, he had no personal income, while his wife made UAH 150,000, including UAH 116,000 that came as a gift from a foreign citizen. At the same time, Vasyl Postulha somehow owns 13 land plots in Kyiv oblast.

Lawyer and scholar working with Khmelnytskyi University of Management and Law and with private company Medical Practice Oksana Kadenko declared significant amounts of money in cash despite little income in 2017. The declaration also does not include the price of her 2011 HYUNDAI TUCSON – which should have been easy to find out, since it was purchased not very long ago, on 25 March 2014*.

Besides, there are questions about how certain candidates or their family members afford expensive real estate or cars.

For instance, lawyer Dmytro Yahunov purchased an apartment in Kyiv for over UAH 1.3 million. The income he declared in 2015 constitutes UAH 20,000, his 2017 income – UAH 40,000. It is unclear how he obtained the funds for an apartment in the capital.

“We believe that unless candidates have a clear explanation of questionable wealth, even if it has been registered as owned by family members or received as a gift from Santa, they cannot be appointed as judges of the High Anti-Corruption Court. At the same time, we encourage candidates to publish documents that would contest the conclusions made by experts of civil society organizations,” says expert with DEJURE Foundation Iryna Shyba.

As a reminder, at the end of December, the High Qualification Commission of Judges published a list of 113 candidates who passed the written test and thus proceed to the next stage of the competition to the HACC.

Currently, the ball is in the court of the Public Council of International Experts, which has 30 days (until January 26) to veto questionable candidates to the High Anti-Corruption Court.

International experts can initiate a review of the candidates whose integrity or professionalism come into question at a joint meeting with the High Qualification Commission of Judges. Through voting, such applicants can be eliminated from the competition.

If 9 HQCJ members and at least 3 out of 6 PCIE members do not confirm that the candidate is consistent with the criteria of professionalism and integrity, he or she can no longer participate in the competition.

After this, the High Qualification Commission of Judges will select the winners at its own discretion among the remaining candidates. For the court to start working, at least 35 judges have to be appointed, including 10 for the Appeal Chamber.

The new court is supposed to go into action in spring 2019. It will receive all cases investigated by the NABU and prosecuted by the SAPO, even those that are already being examined in other courts.

“The Anti-Corruption Court is a hard-won offspring of the judicial reform and a potential symbol of unavoidable justice for corrupt officials. Only professional and honest judges will be able to administer justice fairly and organize high-quality, professional work of the newly created judicial agency. That is precisely why the people who will become the faces of Ukrainian anti-corruption judiciary are so important. After years of fighting for an independent anti-corruption court, we have no right to elect dishonest judges to this agency,” explains representative of Transparency International Ukraine Maksym Kostetskyi.

The list includes all candidates whose actions and documents contain at least one of the following issues:

If you have information on undignified behavior of candidates who are not on the list, please send this information to anticorsud@gmail.com. We guarantee confidentiality.

Only professional and honest judges will be able to administer justice fairly and high-quality, professional work of the newly created judicial agency. That is precisely why the people who will become the faces of Ukrainian anti-corruption judiciary are so important. After years of fighting for an independent anti-corruption court, we have no right to elect dishonest judges to this agency.

* A previous version of this publication erroneously stated that the declaration of HACC candidate Oksana Kadenko did not include information on her husband’s company TOV Berest 2012, which was sued by the tax inspection for failure to pay UAH 387,000 of taxes. Ms. Kadenko could not include this company in the 2017 declaration, because her husband acquired corporate rights only in January 2018.