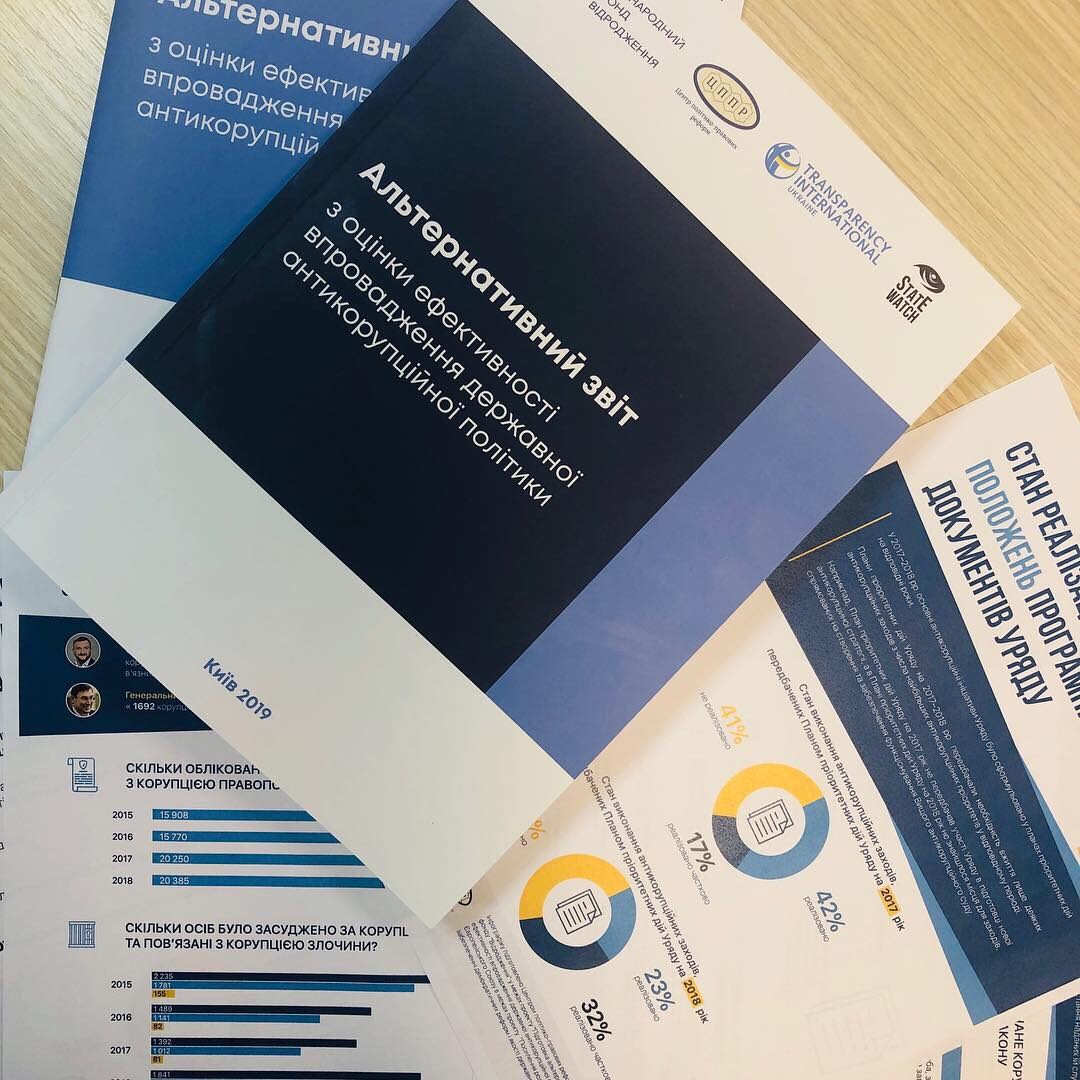 How the Government Fights against Corruption: Actual Facts

Anti-corruption policies in Ukraine are not clearly defined and are not an adequate response to what the society needs, as illustrated, among other things, by the fact that the political will to fight corruption of the key political actors is extremely weak or virtually non-existent, as are the Anti-Corruption Strategy and the Government Program of its implementation for 2019 and the following years.

This was the conclusion made by the authors of the alternative report assessing the effectiveness of the national anti-corruption policy implementation, presented on 26 February 2019. The study encompassed mainly 2017 and 2018 in four key areas: anti-corruption policies, corruption prevention, criminalization of corruption and law enforcement, international cooperation. It was compiled by civil society experts who have specialized in corruption prevention for a long time: O. Kalitenko, D. Kalmykov, I. Koliushko, O. Liemienov, B. Malyshev, A. Marchuk, R. Sivers, V. Tymoshchuk, M. Khavroniuk.

For instance, there is a special authority created in Ukraine to prevent corruption – the National Agency for Corruption Prevention, but throughout its activity it has only attested to its functional impotence. Instead of developing anti-corruption policies, the NACP handles various petty issues that do not change the general picture all that much.

“Research conducted by the public and business have to be taken into account when the new Anti-Corruption Strategy and the National Program for its implementation are developed. If the authorities treat the civil society as partners, instead of viewing them as their enemies or opponents, it will benefit everyone,” says Oleksandr Kalitenko of Transparency International Ukraine. “The current level of pressure on activists is unacceptable. It is important to go back to constructive dialogue and cooperation to achieve systemic anti-corruption solutions, since the goal of the anti-corruption reform has not yet been reached.”

In the sector of ensuring integrity of public service, the experts have pointed out the problems with providing ethical standards of public service and transparency of officials’ income and spending, conflict of interest and its prevention and resolution. However, the legislation on public service is mostly consistent with the international standards.

Good governance standards are implemented unevenly across different sectors. Some progress has been made with the systems of access to information and public procurement, though lately even these sectors have been getting problematic, and anti-corruption review of draft laws conducted by the respective Verkhovna Rada committee and the public. On the other hand, when this review is done by the Ministry of Justice and the NACP, it becomes a mere formality. Another purely formal phenomenon is te development and implementation of anti-corruption programs by public agencies, as well as the situation with financial control and audit. The vital law on administrative procedures has not been adopted yet. The attitude to corruption prevention in the private sector can only be described as laissez-faire.

Academic development director of the Center of Policy and Legal Reform Mykola Khavroniuk, PhD in Law, has commented on the problems that exist with criminalization of corruption. For instance, the list of corruption-related offenses defined in different laws is somewhat contradictory right now. “The provisions of the Criminal Code on corruption-related crimes include dozens of collisions and other shortcomings that impede their practical application. Several different agencies have the investigative jurisdiction over such cases at the same time, and in some of them, investigators do not specialize in this, which means they do not have sufficient knowledge and experience. The procedure of investigation and review of criminal cases on corruption-related crimes gets increasingly complicated every year, which results in courts failing to make fair verdicts in these cases for years,” he says.

Ukraine actively participates in international legal framework for anti-corruption, engages in international cooperation and provides mutual legal help. In this sector, the experts defined such problems as failure to comply with numerous important recommendations of international organizations, primarily due to the lack of political will, and ineffective participation of the NABU, the PGO, and the Ministry of ustice in the international legal assistance on criminal proceedings on corruption-related crimes committed on the territory of Ukraine.

The report has been prepared by the Center of Policy and Legal Reform with the support of IF Renaissance as part of the project Development of the Alternative Report on Effectiveness Assessment of the National Anti-Corruption Policy Implementation in 2017.”