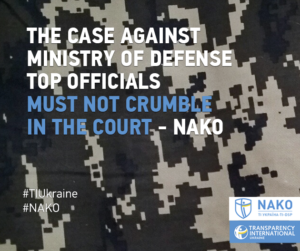 The Independent Defense Anti-Corruption Committee (Natsionalnyi Antykoruptsiinyi Komitet z pytan Oborony, or NAKO) demands an honest and unbiased review of the case against Ministry of Defense top officials who are suspected of corruption. If law enforcement agencies will provide the court with incriminating evidence of corruption-related crimes, the officials involved in the schemes must not avoid fair punishment. NAKO is a joint initiative of Transparency International Defence and Security (the UK) and the Ukrainian chapter of Transparency International.

Today, on October 11, detectives of National Anti-Corruption Bureau of Ukraine (NABU) and Specialized Anti-Corruption Prosecutor’s Office (SAP) detained high-ranking officials of the Ministry of Defense of Ukraine. They are suspected of embezzlement of public funds in the amount of over UAH 149 million. According to NABU, the violations in question are connected with public procurement of fuel for special-purpose vehicles. The customer and the supplier introduced unreasonable changes to the agreements and increase the unit price by 16% compared with the initial price.

The representatives of monitoring platform DoZorro found information in the Public Procurement Reporter which proves the fact of MoD procuring fuel from the  private company Trade Commodity. Since the procurement took place before nationwide launch of the system of electronic public procurement ProZorro, neither protocols of disclosure of procurement, nor data on supplementary agreements to this procurement are known. According to procurement database at z.texty.org.ua, the total amount of concluded agreements between MoD and Trade Commodity reaches UAH 2 billion.

“Currently, the cases against top officials suspected of corruption usually fall apart upon getting to courts. The court chooses an interim measure, and the suspect ends up released on bail. Eventually, the court declares corrupt officials not guilty. That is why Ukraine needs the anti-corruption court that would review such cases. Until it has been created, we will continue to follow the situation carefully to make sure that MoD officials will not avoid punishment if their guilt is established,” asserts Head of NAKO Secretariat Olena Tregub.

NAKO has already developed a range of recommendations aimed at mitigating corruption risks in the defense section, including those related to MoD’s procurement. The committee continues to work on detection of corruption threats and calls on the authorities to implement the existing recommendations still more actively to prevent criminal schemes in the future. Besides, NAKO and DoZorro call on the public to actively monitor and analyze MoD’s procurement done during armed aggression against Ukraine.