The U.N. General Assembly and Concordia Annual Summit Have Started in New York 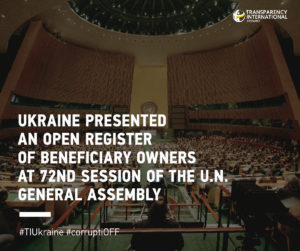 Ukraine presented an open register of beneficiary owners at the annual Concordia Summit. During the 72nd session of the U.N. General Assembly, the UK chapter of global anti-corruption network Transparency International has published the report on what progress has been achieved by governments of 42 states towards the commitments of the 2016 International Anti-Corruption Summit in London

At the morning plenary debate on September 19, Minister of Justice of Ukraine Pavlo Petrenko presented an open register of Ukrainian beneficiary owners. Ukraine was the first country to join the Global Register in May of 2017.

“This is an important step on the way to fight corruption, which “blocked” officials from the chance to hide fortune gained through corruption behind off-shore companies or companies registered on straw persons” – commented Pavlo Petrenko. The minister expressed his appreciation to international partners, including Transparency International Ukraine – “a responsible and reliable partner of the Ministry of Justice and the Government in support of realization of anti-corruption initiatives in general and in the project of integration of Ukrainian and Global register of final beneficiary owners in particular”, – remarked the press service of the Ministry of Justice.

In addition to that, the Minister of Justice reminded about other implemented initiatives that increase transparency of Ukrainian authorities. These include opening of all registers of Ministry of Justice, launch of an electronic register of officials’ declarations, start of activity of anti-corruption bodies and successful work of the ProZorro electronic system of public purchases.

In contrast, the authors of the research Promise to Practice by Transparency International UK have pointed out that none of the commitments undertaken by Ukraine at the  International Anti-Corruption Summit in London has been fulfilled in full. The report follows the progress towards 450 commitments of 42 governments and 5 international organizations from May of 2016 up to  July 31, 2017.

46 percent of the promises given by Ukrainian authorities remain inactivated: the International Center on Fighting Corruption in Law Enforcement is yet to be created, there are no fundamental results in the reform of the Prosecutor General’s Office, there is no exchange of best practices with other countries regarding transparent accountancy and work of the State Fiscal Service. 31 percent of the commitments are in the process of implementation. They include ensuring independence of newly created anti-corruption bodies, improvement of the register of electronic declarations of public officials and a database of Ukrainian beneficiaries. Full report by TI UK can be found at http://bit.ly/2xR2E4B

The Concordia Summit, co-hosted by The B Team and Transparency International, focused on the efforts of public and private sector leaders to fight corruption and restore integrity in business and government.