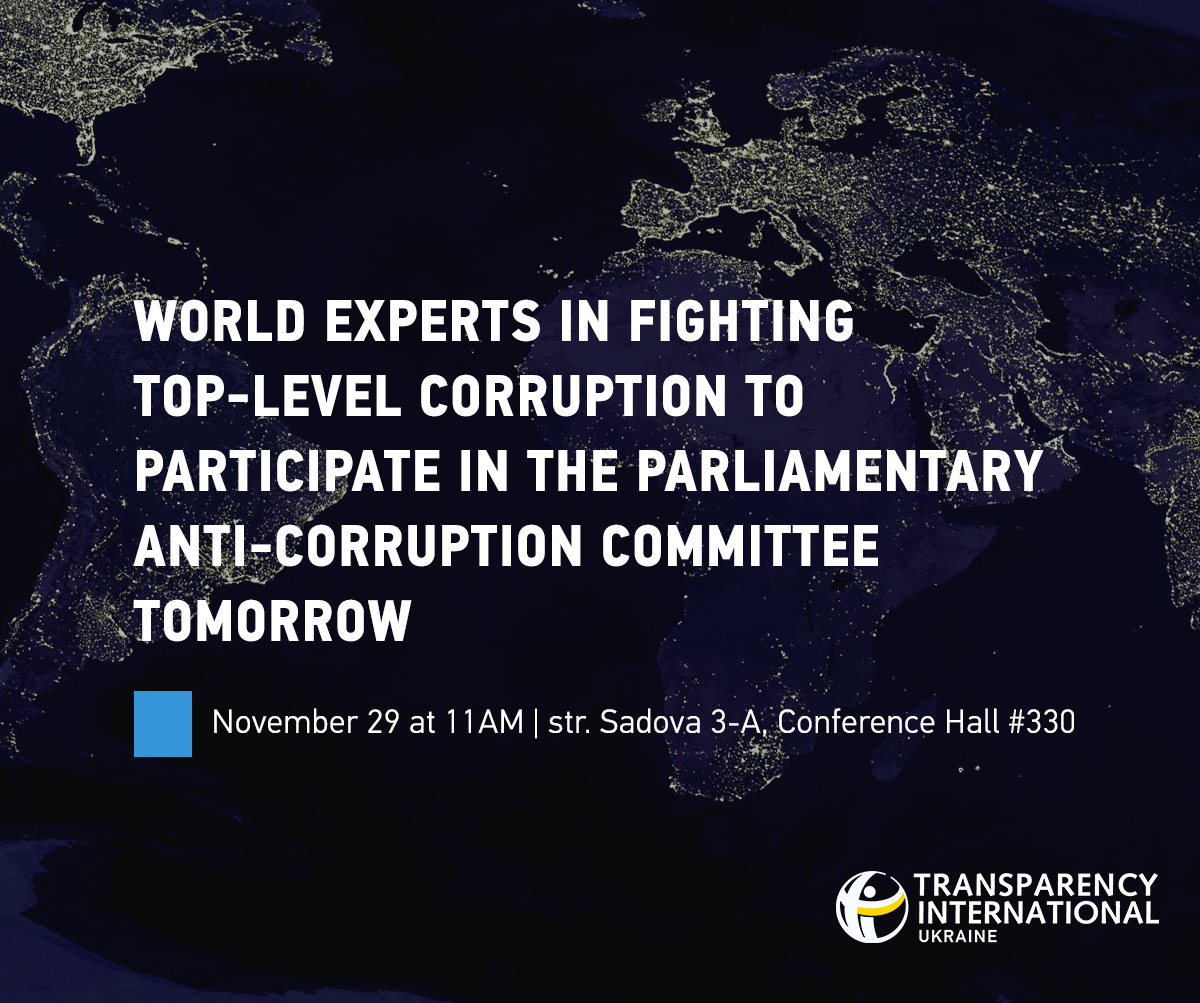 Tomorrow, on November 29 at 11PM the parliamentary Committee on Corruption Prevention and Counteraction will hold a meeting involving world’s leading experts in the area of anti-corruption.  Among them, former Head of the European Anti-Fraud Office and the prosecutor who put Berlusconi behind bars Giovanni Kessler, Spanish prosecutor who imprisoned the President of Guatemala Carlos Castresana. The Chair of The OECD Working Group on Bribery in International Commercial Operations Drago Kos and the others. The full list of experts is attached.

The presentation will be held at the administrative building of the Verkhovna Rada of Ukraine at str. Sadova 3-A, Conference Hall #330

The committee will address the issues of fighting the top-level corruption in Ukraine, obstacles, solutions and international experience in the field.

For questions related to accreditation, contact the Verkhovna Rada Press Service by phone (255-26-35) or fill out the one-time event accreditation form (http://iportal.rada.gov.ua/fba).

Additional information about the experts:

Carlos Castresana is a Spanish lawyer and prosecutor, one of the most famous corruption fighters in the world. He sent to prison 150 most influential public officials for corruption-related crimes. Among the accused criminals were businesspersons, MPs and former president of Guatemala Alfonso Portillo. He built his career from a practicing attorney and a judge to a renowned prosecutor. He used to work as the Public Prosecutor at the Supreme Court in Spain. In 2007-2010 he was the Chair of UN International Commission against Impunity in Guatemala (CICIG). He worked at the United Nations Office on Drugs and Crime and at the Procurement Office of the UNDP. Currently, Mr. Castresana works as the Head of the Crime Department of the Ejaso Legal Company.

In April 2017, he agreed to take part in the selection of the candidates from the Verkhovna Rada for the position of the Member to the External Audit Committee for Independent Evaluation of the National Anti-Corruption Bureau efficiency.

Anca Jurma is the advisor to the Prosecutor General of the National Anti-Corruption Directorate in Romania. In 2002-2017 she worked as the Prosecutor General at the Office of International Cooperation at the National Anti-Corruption Directorate of Romania. In 2000-2002, she was Chief Prosecutor at the Office of International Cooperation in the Supreme Court of Romania. In the course of her work, she demonstrated impressive results in fighting top-level corruption, as she brought to justice ministers, judges, MPs, mayors and even Mircea Băsescu, a brother of Traian Băsescu –  the former President of Romania.

Giovanni Kessler is a famous Italian lawyer and prosecutor, who specializes in fighting financial crimes, organized crime and corruption. He worked as a prosecutor in the Criminal Courts of Trento, Bolzano, as well as at the Office for Fighting Mafia in Sicily. He persecuted businesspersons and top-level public officials from different countries, including the former Prime-Minister iof Italy Silvio Berlusconi. He was the Public Persecutor at the Supreme Court of Spain. From 2011 he holds a position of the Director-General of the European Anti-Fraud Office (OLAF). In 2014-2015 he was a Committee Member for the Selection of the Head of the National Anti-Corruption Bureau of Ukraine.

Drago Kos is Head of the OECD Working Group on Bribery in the International Commercial Operations, co-Chair of the Council under the Verkhovna Rada Committee on Corruption Prevention and Counteraction, Advisor to the Anti-Corruption Agency in Kosovo. He headed the Independent Anti-Corruption Committee of Audit and Evaluation in Afghanistan. In 2003-2011, he was Head of the Group of States Against Corruption (GRECO) – the Council of Europe’s anti-corruption monitoring body. Moreover, he worked as a Special Advisor to the Anti-Corruption Agency in Serbia. In 2004-2010 Drago Kos held a post of the First Chairman of the Commission for the Prevention of Corruption in Slovenia. He is a member of the Council of Europe’s Expert Group on Organized Crime.

Martin Kreutner is Dean and the Executive Secretary of the International Anti-Corruption Academy.  From 2001 to 2010 he served as the Director of the Austrian Federal Bureau for Internal Affairs, a unit he was responsible for commissioning. Among his numerous positions, he was also President of the European Partners against Corruption (EPAC/EACN) network for nine years. In 2014 and 2015 he was recognized by Ethisphere as one of the 100 Most Influential People in Business Ethics for his efforts to combat corruption with IACA as well as his efforts to improve human welfare worldwide through his work with the UN, Transparency International, and other global organizations.

Jens Madsen is a Special Representative for Counterterrorism at the Ministry of Justice and the Ministry of Finance in Denmark. In 2013-2015 he was Head of the Danish Security and Intelligence Service. He held the position of the Director of the Department of the Heavy Economic and International Crimes of the Prosecutor’s Office of Denmark. In 2003-2007 he was a Head of the Danish Financial Intelligence Department. From 2013, he has been a Member of the Supervisory Committee of the OLAF.

Daniel Thelesklaf is a lawyer by profession, has 20 years of experience in Anti-Money Laundering and Anti-Corruption work. He is Director of the Financial Intelligence Unit (FIU) of Liechtenstein, Chair of the Egmont Training Working Group. The Egmont Group is a united body of 156 Financial Intelligence Units (FIUs).  He became the first Director of the Swiss FIU. He worked for the IMF, the Council of Europe, the UN and the OECD. From 2008-2011, he worked as Executive Director of the Basel Institute on Governance and supervised the activities of the International Centre for Asset Recovery.