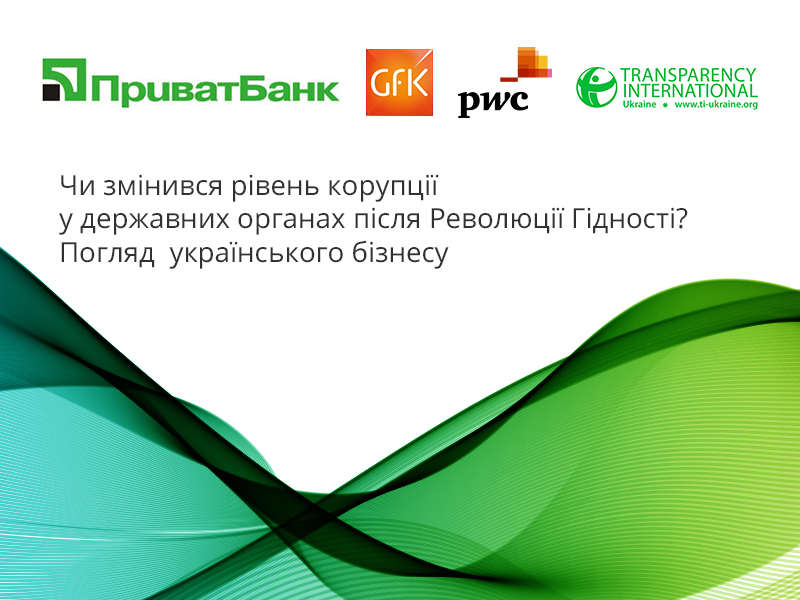 The level of corruption in state government authorities has not changed over the past six months and even worse – a survey conducted among 2741 leaders of Ukrainian business revealed these data.

Transparency International Ukraine, PrivatBank, LLC auditing firm “PricewaterhouseCoopers (Audit)” (hereinafter «PwC Ukraine”) and GfK Ukraine presented the results of a joint survey “Business corruption perceptions index”. The survey was conducted among the leaders of Ukrainian enterprises in February-March 2015 and was intended to reveal a complex picture of the real situation of corruption in Ukraine after the events of the Revolution Dignity. According to the survey 57.2% of respondents believe the situation of corruption in the last six months unchanged, 27.7% said that the situation has worsened, 15.1% of respondents noted improvement. The survey covered 2741 business from all over Ukraine. All survey data visualized on the site www.corruption-index.org.ua

Evaluation was conducted on a scale from (-5) to (5), where 0 meant immutability situation. The most corrupt government agencies were in Odessa (-1.34), Zaporozhye (-1.31) and Khmelnitsky (-1.23) areas. The lowest corruption recorded in Volyn (0.07), Transcarpathian (-0.02) and Poltava (-0.21) areas. In all other regions, business leaders noted the deterioration of corruption.

According to entrepreneurs, tax and fire service most often demanded bribes during regular inspections and operations with VAT. In addition, respondents complained about the forced bribery or payment receipts without extra service when interacting not only with the tax service, but with The Interior as well. As research has shown, Land Resources, State Automobile Inspection and regional administrations officers illegally profit from registering documentation.

All research data were systematized and submitted to the government and institutions that are directly responsible for the implementation of reforms in Ukraine. According to initiative activists, a similar survey will take place quarterly, “After the Revolution of Dignity I often asked managers of our bank serving corporate clients on the current situation:” What customers say? How is it with corruption? “. Someone reported on improvement better, someone –on aggravation. Finally, we proposed Transparency International Ukraine, PwC Ukraine and GfK Ukraine to joint efforts in carrying out research on the subject and after all we came up with results. The survey was conducted free of charge and will be repeatedly hold every 4 months. This will constantly monitor the effectiveness of the government agencies to reduce corruption in every area and to identify the dynamics of reform, “- said Dmitry Dubilet, Deputy Chairman of Privatbank.

Establishment of independent periodic corruption measurement tool of in the most sensitive reform areas is utmost essential, says Andrew Marusov, Chairman of Transparency International Ukraine.  “In view of absence of reliable and regular data source on corruption in Ukraine, administrative decisions taken by top management of the country lack efficiency. In addition, mid-level bureaucrats actively sabotage the key reforms of the state. Therefore, similar sociological survey of Ukrainian business representatives will help directly to the President and the Government of Ukraine to take the most effective management decisions in the reform process. “

Managing Partner of PwC Ukraine Oleg Tymkiv said: “We have prolific experience in similar projects with well-known international companies. Our company is a partner in the preparation of the World Bank Doing Business study (measuring business environment) and therefore, with this experience, we have supported this initiative and acted as advisers of sociological research. “

The survey was conducted in February – March 2015.

The sample is proportional to the amount registered in Ukraine and economically active enterprises under quota following features: