The Ukrainian chapter of the global network Transparency International sums up the results of the evaluation and education stage of the Building Transparency in Ukrainian Cities project.
This January, Transparency International Ukraine started a highly important project aimed at increasing transparency of cities and accountability of regional authorities. It is implemented with the support of UN Democracy Fund. During this time, regional transparency has become an entire powerful focus area of the organization. Project participants have seen a high demand for accountability from local activists and journalists in Ukrainian cities. Besides, local authorities have felt that their aspiration for openness has a positive impact on their reputation and increases citizens’ trust for them.
Within the project, the methodology of city ranking has been developed and a pilot rating of 25 cities has been published. Then, for three months, 5 analysts were composing the transparency ranking of 100 Ukrainian cities. 13 accountability areas with 91 indicators have been taken into account. The ranking is available at transparentcities.in.ua/en.
In July of 2017, TI Ukraine held 6 regional presentations of the transparency ranking. After that, the project managers were approached by public officials of a number of other cities with a request for a presentation. TI Ukraine responded to this request and continued to organize regional presentations of the ranking – on October 4, the presentation took place in Zhytomyr, on October 10 – in Ternopil.
Besides, project representatives consulted the authorities and supported activists from smaller cities that were not included in the ranking. For isntance, a representative of Pyriatyn, who participated in the seminar, asked Transparent Cities experts to share the ranking methodology to calculate the points and assess the transparency of his native city on his own. TI Ukraine welcomes such initiatives and will continue to support active citizens and help with implementing recommendations.
In August and September of this year, project experts held 10 regional seminars for representatives of the local authorities, journalists and activists. 317 people from 90 cities participated in the events. 10 best experts on building transparency told the participants about the Slovak experience of fighting corruption in city councils, taught them how to achieve transparency in the area of social services and housing policy, explained the mechanisms of ensuring effective work of municipal enterprises in the context of making it transparent and understandable for the community. Besides, the participants learned the basics of transparent HR policy and overcoming the conflict of interest and found out the best practices in the budgeting process, useful practices and common problems in procurement. Many activists were interested in working on this subject on a deeper level. For them, TI Ukraine will introduce trainings on the use of the bi.prozorro.org analytics module and on budgeting next year.
The seminars helped raise the participants’ awareness of city transparency by 21%.
Afer the educational seminars on transparency, public officials in certain cities asked the experts to provide a more detailed assessment to help them understand what they need to work on. For example, among those asking for more information were the citizens of Chornomorsk, Pokrovsk, Ternopil, Bakhmut. City council representatives also invite project experts to arrange comprehensive education on transparency in their cities. So far, such education within Transparent Cities will be provied only in 4 cities, supported by CEDEM – Mariupol, Melitopol, Sievierodonetsk and Irpin.
“The seminar turned out very relevant – we are actually developing a new website of Volodymyrets town council of Rivne oblast. Its structure will be based on TI Ukraine’s recommendations on increasing transparency. Based on the rating methodology, we prepared a list of information on the activity of the council. This information will undoubtedly be published on the new website. At the council’s request, the municipal enterprise is now preparing information to be published as well,” says Liudmyla Blyshchuk, lawyer at Volodymyrets town council.
“The main advantage of the seminar is the chance to get exclusive knowledge and learn about colleagues’ positive experience. Now, our city is actively working on its investment image, so transparency and openness are among our priorities,” said assistant deputy of the city council of Oleksandriia Andrii Pylypchenko.
At the educational seminars, passionate discussions started between representatives of the local authorities and activists from the same city. The authorities usually spoke about their transparency in every aspect, while activists pointed out real shortcomings. At every seminar, there were active citizens who demonstrated their readiness to continue working on the subject of transparency and aspire for improvement of the results in their city. For them, TI Ukraine is planning to announce a subgrant contest in December, 2017. To win a subgrant, one will have to submit a plan on improvement the situation with transparency of the city authorities based on TI Ukraine’s methodology.
The subject of regional openness was of interest for both national and regional media. During the project’s lifespan, it was mentioned 92 times in the national media and 186 times in regional media.
TI Ukraine is interested in local democracy development and dissemination of best practices of transparency and accountability in Ukraine. Given the project’s importance and attention to it in the society, the organization will continue its systemic work on implementation of transparency in the cities and improving their general results in the ranking. 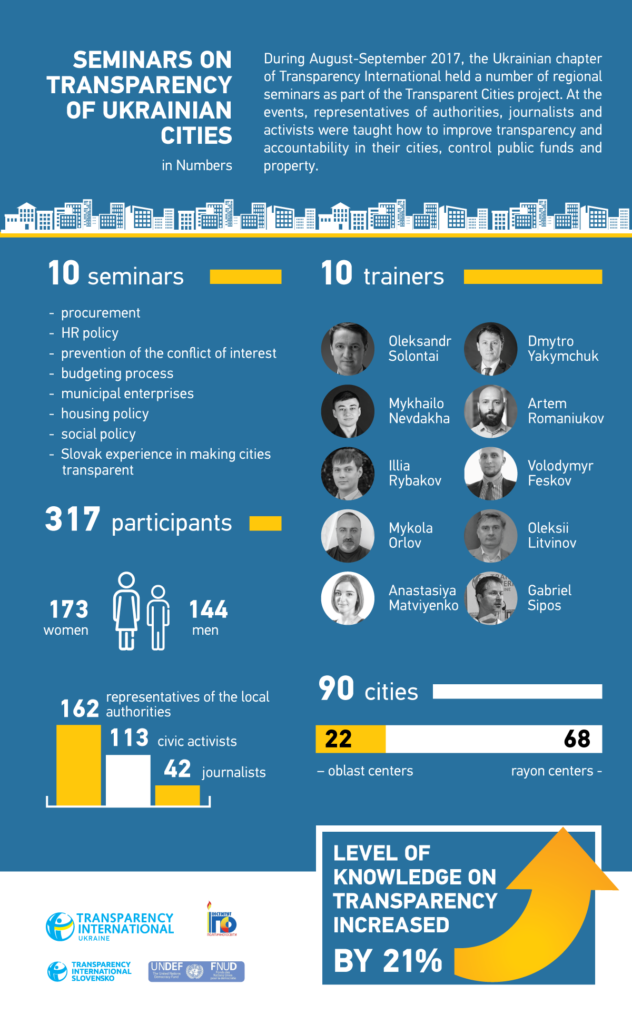