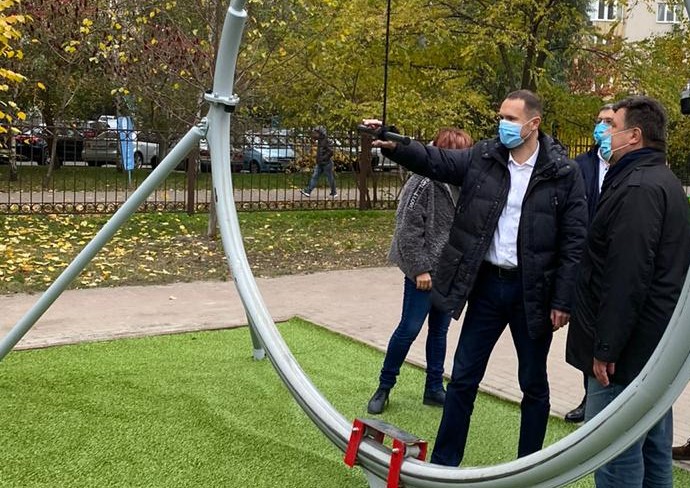 Playgrounds Above All: Where Does Money for Education Go?

How the Department of Education spent budget money on playgrounds for which no space was allocated.

When it comes to school education, society is usually sympathetic: teachers’ salaries are small, and the state does not allocate anything — schools have nothing. Therefore, we need to help financially. It is still not uncommon for parents to give money for lockers or curtains in the classroom. Or they unite to purchase multimedia equipment, promoting it through the draft participatory budget. And almost necessarily — they buy basic consumables on their own: toilet paper, soap, napkins, disinfectants.

The explanation for this is “the state does not have funds” or “the district does not allocate funds.” However, active parents, especially those who have attended the school of sharing community experience “SOS parents” know that in reality the situation is slightly different. Usually, a district department of education does not allocate funds for what it is not forced to allocate. At the same time, some school principals still do not write requests for funding because they believe that funds will not be allocated to them anyway. However, this is how the budget is formed. And if the request is not sent, then you will definitely not be allocated any money. Instead, parents have to give money.

So, somewhere the parents of students have long forgotten what it means to buy curtains and soap for school, and somewhere the cleaner asks the parents’ committee to buy her new mops. Because “who else should she ask, the state does not give anything.”

In fact, spending on education in the budgets of local communities is not only large amounts, but also fairly protected items of expenditure. For example, in the capital, the education budget is sometimes up to half of all expenditures. This year it has reached almost UAH 24.9 bln — 43% of all expenses. There are expenses for kindergartens, schools, and other municipal educational institutions.

Of course, most of the money is spent on remuneration. For example, in schools this year, it amounts to about 77% of expenses. Another part of the funds should be allocated for utilities, food, medicines, and other mandatory things. The rest is distributed by district education departments at their discretion.

For example, last year, when the pandemic dramatically changed the usual order of priorities, district education departments urgently had to buy masks, disinfectants, and then laptops and internet services for teachers who worked remotely. The number and volume of these procurement transactions were decided locally, depending on the order of schools and real needs.

And the Darnytskyi district of Kyiv, at the height of the second wave of Covid-19 incidence in the autumn of 2020, decided to install children’s playgrounds in every school. The project was even shown to the head of the Ministry of Education and Science Serhii Shkarlet and named part of the NUS project “Street Space.”

The concept of the New Ukrainian School really implies more activities for primary school students and the availability of creative spaces. However, nothing is known about the separate project “Street Space.”

Playgrounds were purchased for UAH 20.6 mln. The specification to the contract refers to 38 schools, but each element was purchased at 15, and the Ministry of Education and Science wrote that they were installed in 15 educational institutions. Accordingly, each cost the local budget from UAH 500,000 to UAH 1.37 mln (more likely).

The purchase of playground equipment itself took place with the lowest possible savings: tender with an expected cost of UAH 20.7 mln was won by the supplier who offered the price of UAH 20.62 mln. Interestingly, the winner of the auction was TOV Budremservis, which specializes more in interior repairs. In Kyiv, this company won tenders of Kyivzelenbud, Darnytskyi Capital Investment Department, and Education Department of the same district. It has experience working with playgrounds, but this is its first such large order of playing complexes and at the same time the most expensive contract in Prozorro so far.

To clarify what kind of mandatory program made it so expensive to equip the street space of schools last year, we turned to the Department of Education and science of the KCSA. They do not know about such a program and explained that the decision on the procurement in the district is made locally. We also asked other districts of the capital if they had similar systematic procurement transactions of sites for the NUS, and received negative answers.

The Department of Education of the Darnytskyi district also confirmed that the playgrounds did not concern the NUS, and the funds for their procurement went under the budget item “Provision of secondary education by secondary education institutions.” In other words, these are ordinary funds for organizing the educational process. Just this year, this district has decided that it is most appropriate to use UAH 20 mln for playgrounds, and not for some other things.

In general, the district can be understood — after all, playgrounds are almost a sacred object: everyone wants them and there are never too many of them. However, it turned out that the mandatory installation of playgrounds is not always a good thing. Especially, when no one asked for them.

In one school of the district, a place for a large playing complex, where children will spend time, was found only by the fence, near a street with busy traffic. In other schools, slides and tools were placed altogether on lawns between trees, close to classroom windows, contrary to the standards of building codes. In the Sloviansk school, you could go down such a slide directly into the wall of the school and touch either a sewer manhole or a lightning rod. After a scandal in local communities and an appeal to the head of the district education department, some of these dangerously installed complexes were simply removed, where to — it is unknown.

The parents of school No. 111, where extended day groups have nowhere to spend time at all, told (and the administration confirmed) that they did not get a single playing complex. And two schools of the district got playgrounds both according to the purchase of the district, and within the implementation of the participatory budget project. That is, to put it mildly, confusion and installation for the sake of installation.

As we have already mentioned, often for cities, playgrounds are the golden standard. However, when it comes to education, the priorities are still slightly different: schools usually need insulation, repairs, arrangement, or repair of sports halls and playgrounds for physical education.

But these things take longer to plan, are harder to implement, and require construction supervision and a lot of responsibility. Just like providing schools with toilet paper/soap/disinfectants/mops requires calculations of school applications, additional orders, etc. The installation of playing complexes — where they are needed, and where not so much — is quick and easy: a month of work — and 20 mln gets spent at the end of the budget year.

What can parents do about it? To control what the school where your child is studying buys, you can start monitoring their procurement. TI Ukraine created a handbook with instructions how to do this. It describes in detail how to search for school procurement transactions, in particular using the map “What does your school buy?”, write information requests and report procurement violations to law enforcement and supervisory bodies.