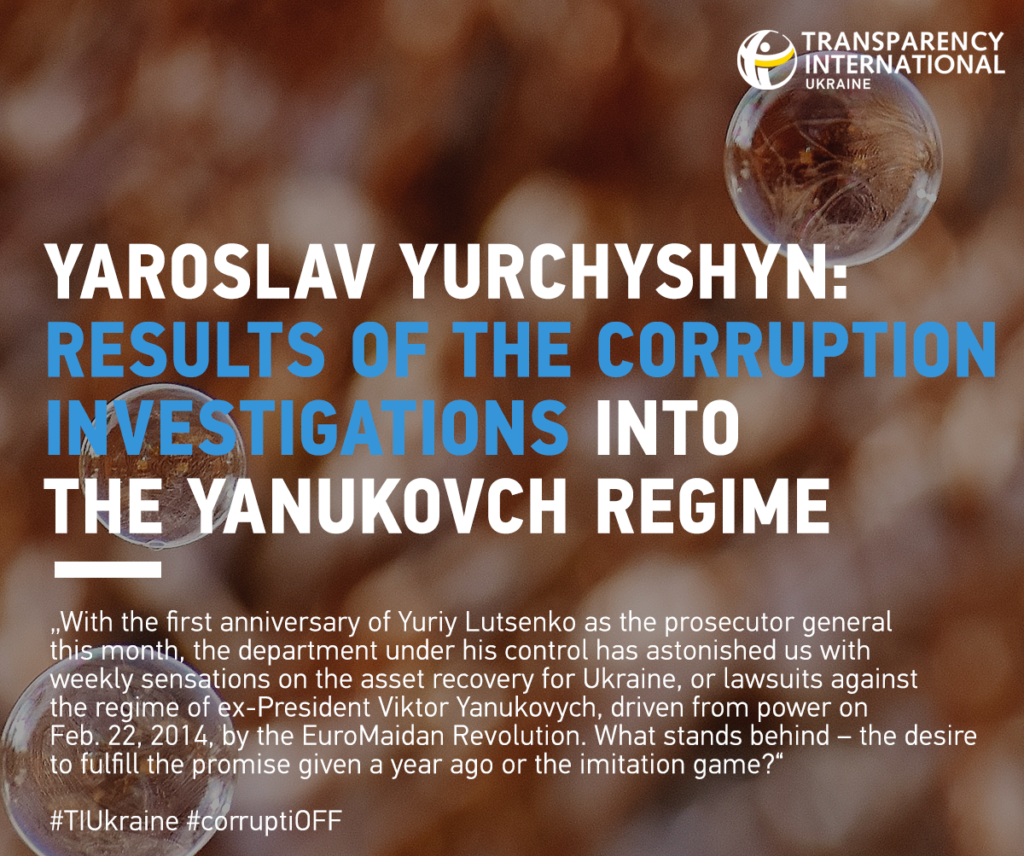 Results of the corruption investigations into the Yanukovch regime With the first anniversary of Yuriy Lutsenko as the prosecutor general this month, the department under his control has astonished us with weekly sensations on the asset recovery for Ukraine, or lawsuits against the regime of ex-President Viktor Yanukovych, driven from power on Feb. 22, 2014, by the EuroMaidan Revolution.

What stands behind – the desire to fulfill the promise given a year ago or the imitation game?

During the last three years, the law enforcement agencies of Ukraine, including the Prosecutor General’s Office, investigated the corruption crimes committed by officials of the Yanukovych regime. Little results of crime investigations against Yanukovych and his counterparts are explained by close relations of these parties with the head of the prosecution office. Since 2014, the main office located at 4 Reznitskaya St. has changed its head, but there is not any significant progress in the investigations.

Under Lutsenko, similar to his three predecessors, no significant results have been achieved in the investigation of senior members of the Yanukovych regime and recovery of their assets to the state budget.

For more than three years, the only outcome of the prosecutor’s office and their fight against corruption was the information provided by Lutsenko on the confiscation to the state budget of $1.5 billion owned by  Yanukovych or his counterparts. Unfortunately, this information cannot be considered as reliable material (http://bit.ly/2pbIuuc) and the judgment has not been shared with the public in a month.

On the contrary, when Lutsenko was appointed as the prosecutor general, the office has closed proceedings in criminal cases dealing with illicit enrichment of the ex-minister of the Ecology and Natural Resources Mykhola Zlochevsky. Also, there are no results achieved by the National Anti-Corruption Bureau of Ukraine, which assisted prosecutors in the seizure of nearly $23 million and hold on the account of Zlochevsky in London (http://bit.ly/2jgTWUM).

In early March, the list of individuals to whom the European Union has applied personal sanctions includes one of the Yanukovych counterparts, Yurii Ivaniushchenko. The Prosecutor General’s Office did not comment it. Also, we cannot follow the source and the destiny of more than $100 million owned by Ivaniushchenko seized in different jurisdictions of Europe (http://bit.ly/2qI9IJ7).

Oleksandr Katsuba, a former deputy chairman of Naftogaz Ukraine was released after eight months in jail and conducted a plea agreement between the prosecutor and the accused person. Katsuba was accused of appropriation of funds owned by Naftogaz Ukraine of about $404 million and about Hr 450 million (approximately $56 million) and was accused in the attempt to acquire illegally about Hr 5 billion (about $637 million).

Under the plea agreement, Oleksandr Katsuba paid the fine of about Hr 100 million (about $3.5 million) and provided evidence about other persons involved in the crime. The fine is very low in comparison with the damage caused by the criminal activity, and there is also the question related the credibility of testimony given by Oleksandr Katsuba. However, his older brother, Sergii, a deputy chairman of Naftogaz Ukraine, was a part of the same criminal proceedings.

The investigations results and the criminal acts under the prosecution investigation were not available to the public including the place of permanent residence of offenders and possible location of the stolen assets.

In 2014, Vitaliy Yarema, the prosecutor general then, commented that there were over 30 investigations on the political corruption of the Yanukovych regime when the assets of suspects were seized for about Hr 6.2 billion and $1.8 billion. At the same time, the progress of the pre-trial proceedings and results of lawsuits against corrupt officials of the Viktor Yanukovych regime and their recovery to the state budget have not been shared with the public.

In spite of the fact that Transparency International asked the prosecutor general to provide more information on the issue, he supplied us with the fragmented and contradictory information about the criminal proceedings.

The Prosecutor General’s Office of Ukraine has not been able to provide any formation on an open data on criminal proceedings related to crimes committed during the Revolution of Dignity, including updated information on the investigation of every criminal proceeding, pre-trial information, trial cases and court decisions (http://bit.ly/2qCi0CZ). For several months, Transparency International Ukraine has done its best to inform the prosecutor general (during workshops, in open and official letters) about the need to develop an investigation registry about the corruption cases of the Yanukovych regime’s but in vain.

Despite the law, requirements of the annual reports provided to the parliament between 2016-2017, the Prosecutor General did not provide any report of this type.

The chairman of the global network Transparency International, José Ugaz, visited Ukraine in June 2016 and the President of Ukraine Petro Poroshenko (accompanied by the Prosecutor General, Yurii Lutsenko) asked him to assist the recovery of assets stolen during the Yanukovych regime. (http://bit.ly/2pHvzCK)

However, absence of any information available to the public from the Prosecutor General of Ukraine related to the state of affairs and the structure of seized assets does not support any effective communication with the international partners and prevent us to develop any further actions.

In July, the United States will lead the first Global Forum on the Asset Recovery, and the main focus will be on such countries as Ukraine, Nigeria, Tunisia and Sri Lanka.

Unfortunately, the law enforcement agencies of Ukraine do not provide any optimistic solutions on the asset recovery because of the corruption offenses and assets located abroad.

After one year on the job, information became public concerning the termination of the search by Interpol of Viktor and his son, Oleksandr Yanukovych, Andriy Klyuyev and Eduard Stavytskyi. According to the representatives of the Prosecution General’s Office (no information available in the list of the termination of search by Interpol), this decision was taken due to some drawback in the Ukrainian law. During the last year (according to the representatives of the Prosecutor’s General Office) a complaint to the Interpol was sent by the lawyers of Yanukovych, but no statements about the need for legislative changes, demanded and expected by Interpol, was made.

Should we consider this the sad reality for Ukraine in the context of grand corruption during the Yanukovych regime and recovery of the stolen assets? I would hope that this greater good is not lost. We have to work hard to achieve any result.

In order to understand a chance of Ukraine to keep its dignity and finish the investigation of corruption during the Yanukovych regime, Transparency International Ukraine will launch a panel discussion at the end of May, attended by a number of international experts, including the chair of the board of the global anti-corruption movement José Ugaz. We invite representatives of the Ukrainian law enforcement agencies who will have a chance to cooperate with the stolen assets recovery initiative and gain new experience. We hope that the invited state leaders will have several free hours to join our discussion and share their views on the issued discussed.

Yaroslav Yurchyshyn is the executive director of Transparency International Ukraine